General William Howe and the War of Independence 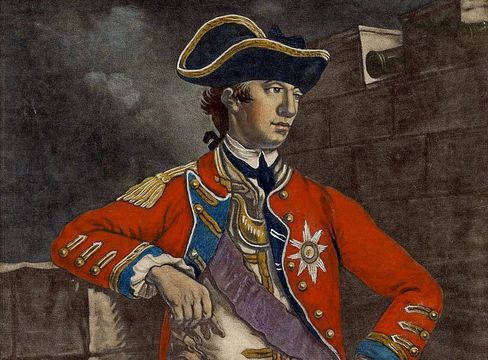 General William Howe was Commander-in-Chief of the British Army during the crucial Battle of Bunker Hill. Howe played a crucial (and much debated over) role during America's struggle for independence and was a seminal figure during this time.

In 1774, General William Howe ran for a seat in the House of Commons as representative of the largely Whig constituency of Nottingham.

He assured the electors, who would not have tolerated any other attitude, that he, like the more renowned General Jeffrey Amherst and Admiral Augustus Keppel, would refuse to serve in a war against England's American colonies. But while publicly disapproving of military action against the colonists, Howe privately let the British ministry know that he was available.

Early in 1775, the General confounded the voters of Nottingham by accepting the position of second-in-command of British forces in America. 'I cannot easily describe the discontent and disappointment which appears among a great number of your constituents here,' a Nottingham grocer wrote to General Howe, 'on account of your accepting a command in the expedition against our American brethren. . . . Judge, if you can, the confusion this occasions among your friends.' 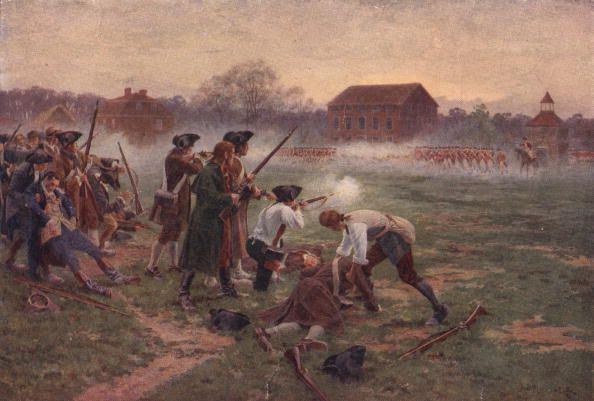 Early shots in the War of Independence

The Nottingham voters were not the only ones puzzled by General Howe's contradictory behavior. For two centuries historians have tried conclusively to unravel the mysteries of Howe's role in the American Revolution.

Some believe that the General, an acknowledged advocate of a peaceful reconciliation with the colonies, agreed to serve in America so that he could personally guarantee that military force was applied with a delicate hand and diplomatic concessions were given a fair try. Others are equally sure that General Howe's conciliatory stance was nothing more than pre-election posturing aimed at winning him a seat in Parliament.

Confident that most Americans would welcome him, General Howe arrived in Boston on 25th May 1775.

By then the first shots of the American Revolution had already been fired, and American militia besieged Boston. Outnumbered, the British commander-in-chief, General Thomas Gage, had waited patiently in the city for the arrival of the transports that were bringing Generals Howe, John Burgoyne, and Henry Clinton, with about 5,000 fresh troops from England.

The four generals conferred over plans to break the siege, but before they could act the rebel army occupied Breed's Hill on Charlestown Peninsula. From their fortifications on the hill, the colonists presented a challenge that the British generals across the bay could not ignore.

The next morning, warships of the Royal Navy bombarded Breed's Hill while General Gage and his subordinates debated their options. General Clinton favored a landing behind the rebel fortifications to trap the colonial militia and force it to surrender.

General Gage disagreed with Clinton's strategy, which was bold but risky, and instead adopted a more conservative plan proposed by Howe. British troops would land near the tip of the Charlestown Peninsula and make a frontal assault on Breed's Hill and its supporting positions. Howe expected that the untrained colonial militia would run from the attack or that they could offer only a feeble resistance that would easily be overcome. Instead, the man who had advocated peaceful reconciliation was leading his troops into one of the bloodiest battles of the American War. 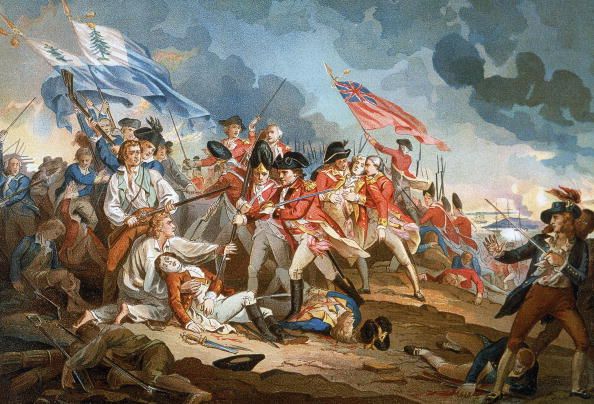 Read more: The Battle of Hastings and how the Normans changed England

The battle takes a turn

By nightfall, more than 1,100 British troops and 400 provincial militiamen had been killed or wounded on the slopes of Breed's Hill. In the attack, the town of Charlestown had been destroyed by British naval gunfire and Joseph Warren, the popular President of the Massachusetts Provincial Congress, had been killed. General Howe was stunned.

The battle had made the possibility of a negotiated settlement much more remote by increasing the fury of the colonists while at the same time giving them confidence in their ability to fight the King's regiments on even terms.

In the aftermath of the battle, Generals Gage and Howe agreed that it would not be possible to conduct the war from Boston, and they put renewed emphasis on an often-discussed strategy of transferring the British army to New York.

By then General Gage had been recalled to England, and Howe had assumed the overall command of all British forces in America. After regrouping in Halifax, Nova Scotia, he sailed with his army to Staten Island, New York, arriving on 5th July. George Washington, anticipating action in New York, had already marched the Continental Army south from Boston and occupied Manhattan and Long Island.

When it became obvious that only military force would break the stalemate, General Howe turned his full attention to the occupation of New York.

With the arrival of yet more reinforcements, he believed his army was strong enough to successfully assault the rebel defenses. But while he was fairly certain of his ability to achieve a military victory, a policy of moderation still directed his actions.

Howe opposed the advocates of the force who could not see past the short-term goal of suppressing the rebellion. Devastating the colonies, he believed, might compel their submission, but it would render them useless to the Empire. Only by demonstrating Britain's overwhelming military strength without permanently embittering the colonists could he restore America to its function as a cooperative and profitable British dominion.

In planning his offensive in New York, therefore, Howe ignored his own often-stated belief that the quickest way to end the war was to destroy the Continental Army.

A bloody victory now would not serve his purpose. Instead, he adopted a strategy of conquering ground rather than killing colonists. His strategy was to discourage the rebels by mounting a steady, irresistible advance through their farms and fields and forcing them from New York in much the same way he had been compelled to leave Boston.

The British march on New York

The campaign began on 22nd August, with British troops landing at Gravesend on Long Island.

The American defenses on the island consisted of a strong line of earthworks at Brooklyn, supported by a number of regiments that guarded the passes through a row of hills that lay between the principal British and American forces. For five days British regiments reconnoitered these positions and found that the easternmost pass through the hills was guarded by only a handful of scouts.

On 27th August, a British column marched unopposed past this weakly defended flank, while portions of the army made a diversionary frontal assault. Nearly 1,000 rebel troops were cut off from the relative safety of Brooklyn and forced to surrender. But rather than continuing his attack by storming the main American lines, General Howe satisfied himself with what he had already won.

Some of the General's subordinate officers and some Members of Parliament later criticized Howe's decision, believing that a timely assault might have ended the war. The General, however, had much to consider before launching such an attack.

Many of his regiments were still weak from their recent voyage to America. Following a long march and heavy fighting, he sensed that they were exhausted. He also remembered the fight on Breed's Hill the year before, when 3,000 rebels had so capably defended hastily erected earthworks against well-rested troops. Now he faced nearly 9,000 defenders in much more extensive entrenchments. 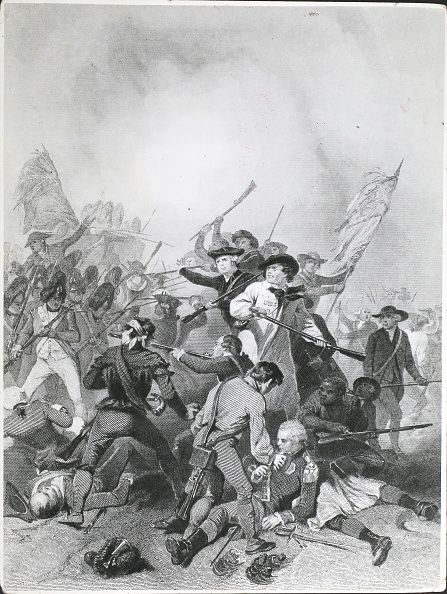 Battle during the War of Independence

Rather than risk the consequences, the General opted to lay siege to the colonists and force them to surrender. Time was an effective weapon to use against the rebel forces. In four months, Howe knew, most of the colonial troops' enlistments would expire and General Washington's army would most likely put down their weapons and go home. If he could prevent anything that might give new encouragement to the colonists, Howe had a chance to win the war without fighting another battle.

During the night of 29th August, however, the entire rebel army was able to escape under cover of fog across the East River to Manhattan. With the possibilities of a crushing military victory or a more subtle form of persuasion gone, Howe returned to his strategy of relentlessly pursuing the Continental Army wherever it went, hoping again to demonstrate the hopelessness of its cause.

From Long Island, General Howe forced the rebels from Manhattan, across the Hudson, through New Jersey and to the banks of the Delaware River, not far from the colonial capital of Philadelphia. Here, General Washington's foresight in taking all the boats on the river to the far side with his retreating army forced an end to the pursuit.

General Howe made plans to return to England for the winter, hoping, perhaps, that by spring there would be no need to return. He had already been knighted for his victory on Long Island, and there was every reason to be hopeful that he would soon receive credit for having ended the rebellion without undue loss of life on either side.

Perhaps another week of good fortune would have allowed him to achieve his goal. But on Christmas night Washington crossed the Delaware River with his small army and the next day surprised Britain's German allies at Trenton, taking nearly 1,000 prisoners. Then, after pleading with his troops to stay just a few days past the end of their enlistments, he outwitted General Charles Earl Cornwallis and defeated three British regiments in Princeton, taking more than 400 additional prisoners.

The rebel victories, though small, destroyed General Howe's hopes of ending the war by spring. Encouraged by George Washington's success, new recruits came forward to replace those who left his army. The British commander-in-chief abandoned most of New Jersey, along with his plan to pacify its inhabitants. He admitted, regretfully, that there now seemed no hope of suppressing the rebellion without crushing the American army.

Washington, however, had already reached the same conclusion and was determined to preserve his troops rather than risk all on the outcome of a single battle. From the spring of 1777 until General Howe resigned his command and returned home in 1778, Sir William won several more victories, but he was never again able to catch the rebel army in the sort of trap he had let it escape from on Long Island.

It is hard to say whether Howe is a true war hero, as he was unable to suppress the American rebellion. Howe had harsh critics following his resignation, but he played without question a crucial role in both American and British military history. 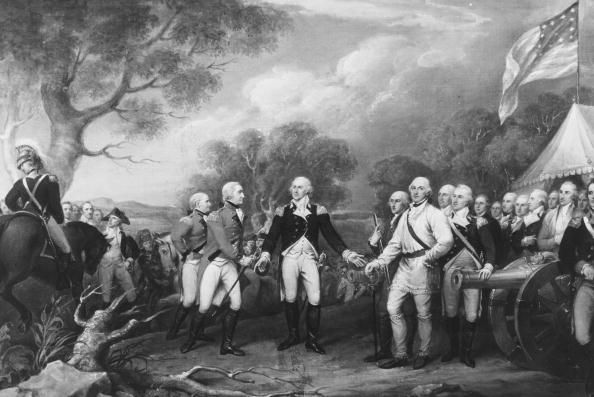