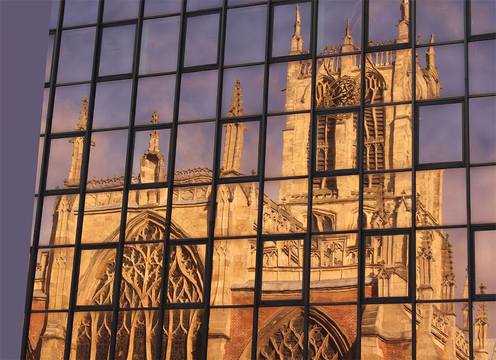 The UK 2017 City of Culture “Coming Out of the Shadows”


No one ever went to Hull, least of all for fun. Hull has long been one of those places where people greeted the news with incredulity (“You’re going to Hull?”) and looked askance. There was just no reason to visit the bland industrial port city on the broad River Humber. Why would Hull, of all places, be named the quadrennial UK City of Culture? Inquiring British Heritage Travel readers, of course, want to know. And so under the variegated autumnal skies, I set off to find the answer. 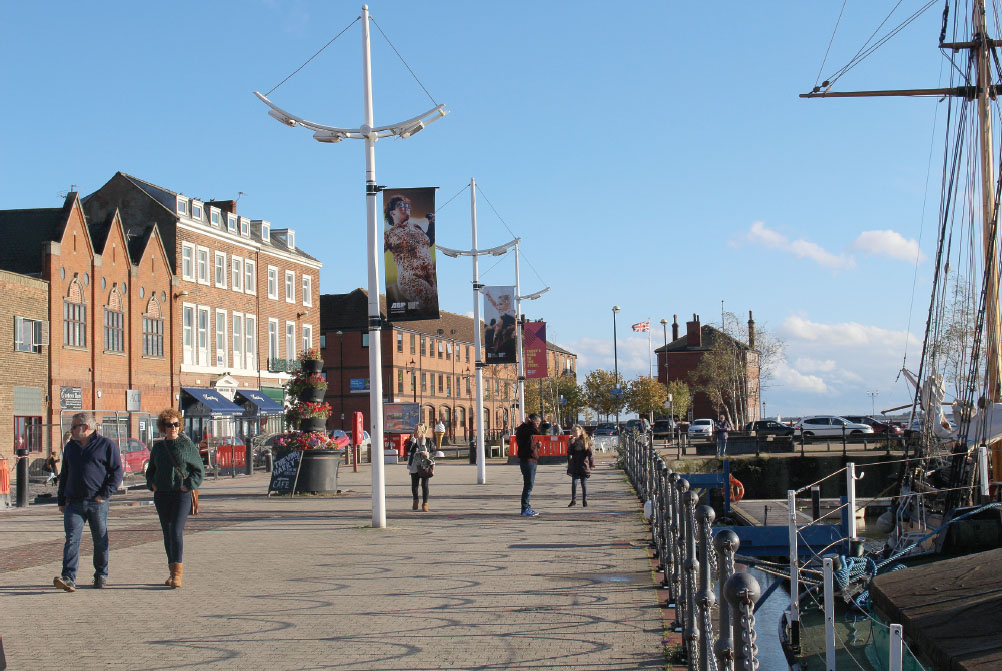 9
The broad quays of Hull Marina form popular boulevards lined with shops and eateries of all descriptions.[/caption]

Properly titled Kingston upon Hull, but long known universally as Hull, the port grew up at the confluence of the River Hull and the much larger River Humber, as it broadens toward the North Sea in the East Riding of Yorkshire. Still some 20 miles from the coast, the city boasts tides of 16 feet on both rivers.

It was Hull’s easy deep-water access and close proximity to the ports of the Low Countries and Scandinavia that spurred Hull’s growth as a trading hub. The original medieval port on the River Hull adapted as ship sizes increased dramatically in the 18th and 19th centuries, and the docklands turned to face the Humber. Manufacturing grew in the wake of its ready export capacity. This was a real working-class city, a place bright young people left to seek their fortunes elsewhere.

Hull’s misfortune has always been that it doesn’t lead anywhere. No one stops in Hull, because it’s not on anyone’s route. Motorways head in Hull’s direction north and south from the M18 to the west, but fade abruptly some miles before Hull. The train line runs into Hull from the East Coast Mainline at Doncaster—and ends. With the connection, it’s about a three-hour journey from London.

That’s a journey, however, that thousands of visitors will make over the coming year. There’s now good reason to join them—and visit Hull, the 2017 UK City of Culture. Hull is a glorious surprise!

Established in 2009, and administered by the Department for Culture, Media and Sport, the designation UK City of Culture is awarded every four years to a city that showcases the transformational power of culture. Northern Ireland’s Derry held the honor first in 2013. From a shortlist of four bids, that year Hull was the unanimous choice of the selection committee as the next winning city—for its “compelling case based on its theme as ‘a city coming out of the shadows.’ “ 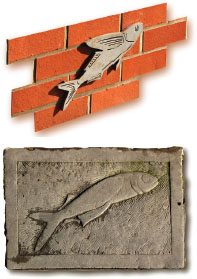 The city’s successful bid for the coveted City of Culture designation has been greeted with local pride and civic enthusiasm. Millions of pounds have flowed in for the redevelopment of central city plazas and thoroughfares and the infrastructure of a user-friendly, welcoming city.

Keep an eye out for the eclectic Fish Trail embedded in pavements and walls throughout the Old Town. 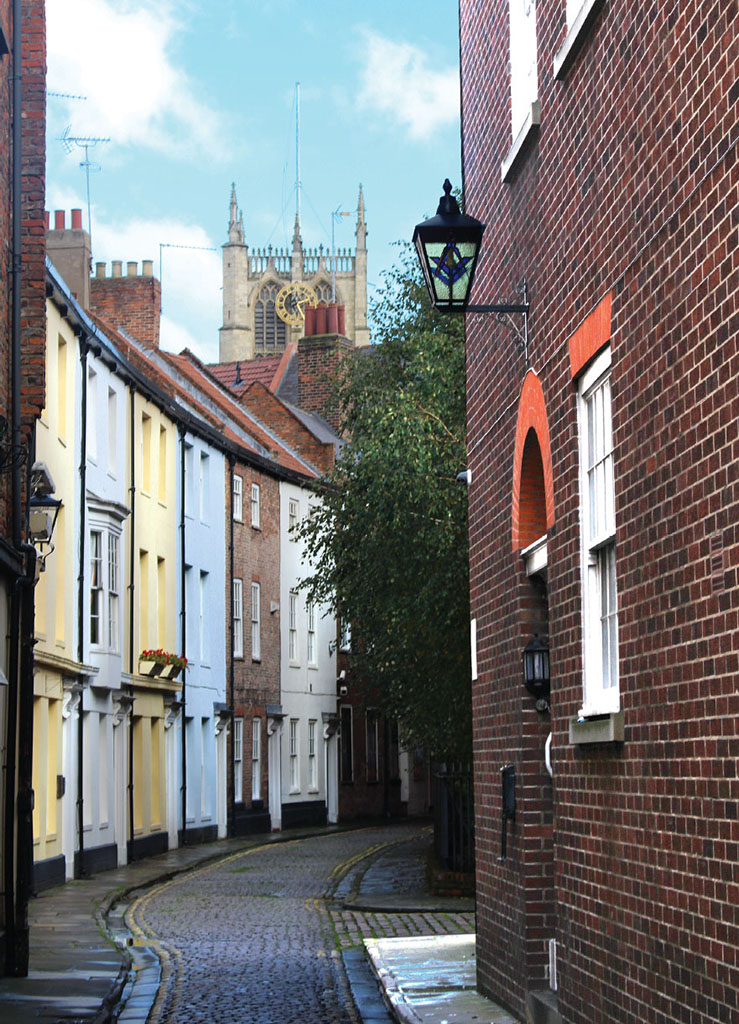 9
In Hull’s Old Town, Posterngate at its intersection with Dagger Lane is a typical street.[/caption] 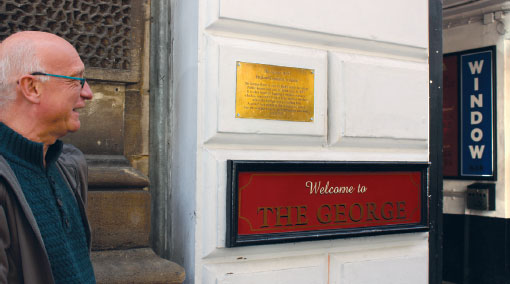 9
Paul Schofield points out the smallest window in Hull—right of the bronze plaque.[/caption]

I was fortunate enough to be shown around town by amiable Paul Schofield, well known as the local guide par excellance, and worthy of his reputation. Catch him most days leading two-hour walking tours of the Old Town and docks from the TIC at City Hall. Paul unpacked the story of Hull’s past & present with panache.

While large portions of the commercial waterfront and residential neighborhoods suffered devastation, the tangled blocks and alleys of Hull’s Old Town were left largely unscathed. There was simply nothing of strategic value in the medieval warren of churches, pubs and deserted Georgian warehouses. 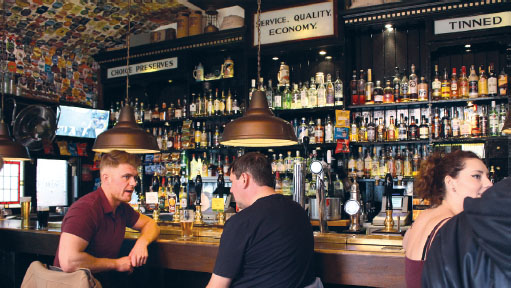 9
Besides its good beer, the Lion and Key is renowned with locals for fish & chips.[/caption]

South facing the Humber, huge Hull Marina is the modern reincarnation of the old Humber Docks, filled now largely with colorful pleasure craft. Warehouses and sundry maritime buildings on the quays have been repurposed as luxury housing, offices and restaurants.

Accompanying Schofield into the Old Town through surrounding alleys and narrow streets with names like Dagger Lane, Posterngate and Scale Lane Staithe, it is impossible to miss the myriad architectural details built through centuries of history. A gaggle of old pubs form a historic pub trail and include Ye Olde Black Boy, dating from 1729, and The George coaching inn with the smallest window in the city (so the ostler could watch for approaching coaches). At Paul’s own local pub, The Lion and Key, he quipped, “I am legally required to show you inside” the beautifully restored Victorian landmark. There’s also Holy Trinity Church, reputedly the largest parish church in England, and Hepworth’s Victorian arcade of shops—some of which have been there for generations. 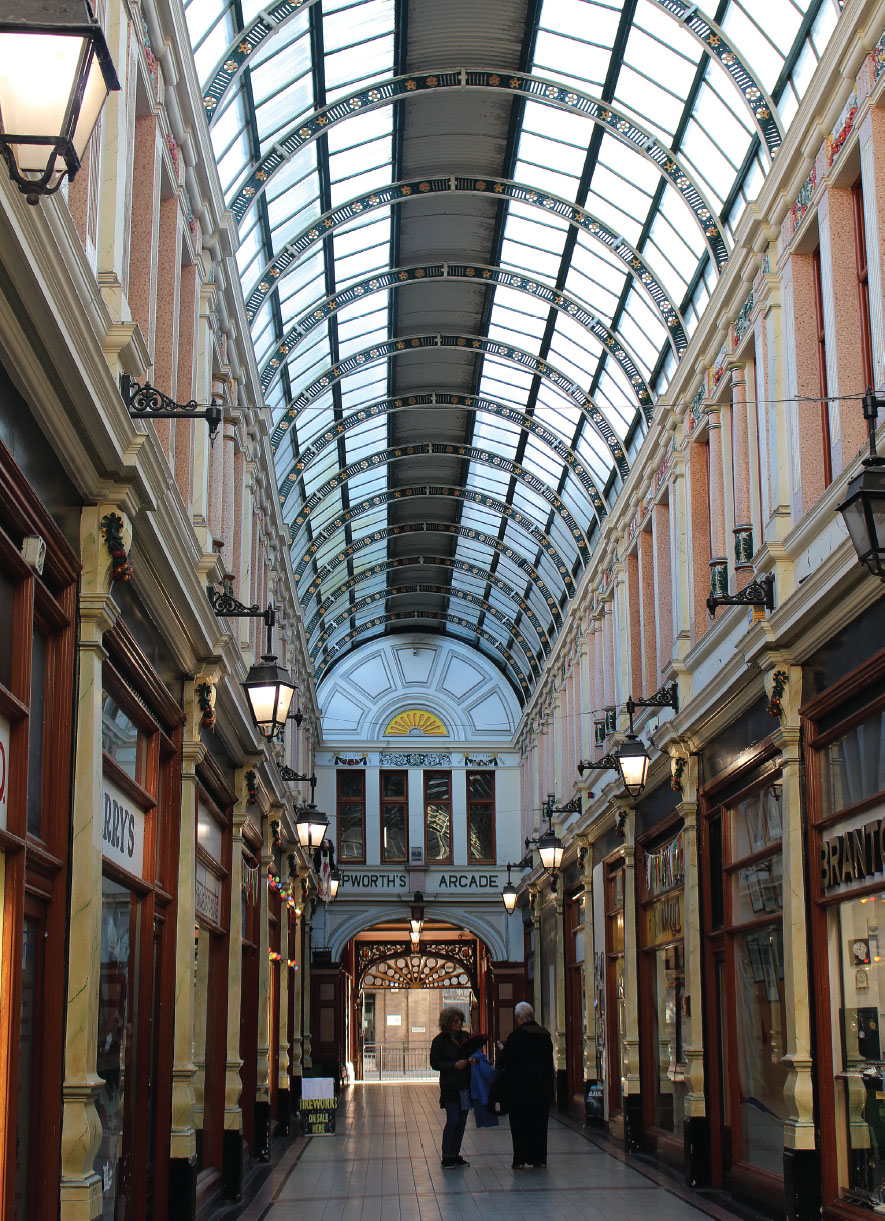 Along the Old Town’s narrow High Street, the Museums Quarter houses three adjacent fascinating museums. The Hull and East Riding Museum showcases archaeology and anthropology of the area from the early Celtic tribes up to the 17th century. Next door, the Streetlife Museum tells the story of Hull’s last 200 years through every means of transport imaginable.

A beautiful brick 17th-century townhouse was the birthplace and lifelong home of Hull’s favorite son and long-time Member of Parliament, William Wilberforce. His 20-year parliamentary crusade to abolish the slave trade was finally successful in 1807 with the passage of the Slave Trade Act. The Wilberforce House tells his story, and of the continuing challenge to combat slavery in our world today. Like the Maritime Museum, each of Hull’s civic museums offers free admission. 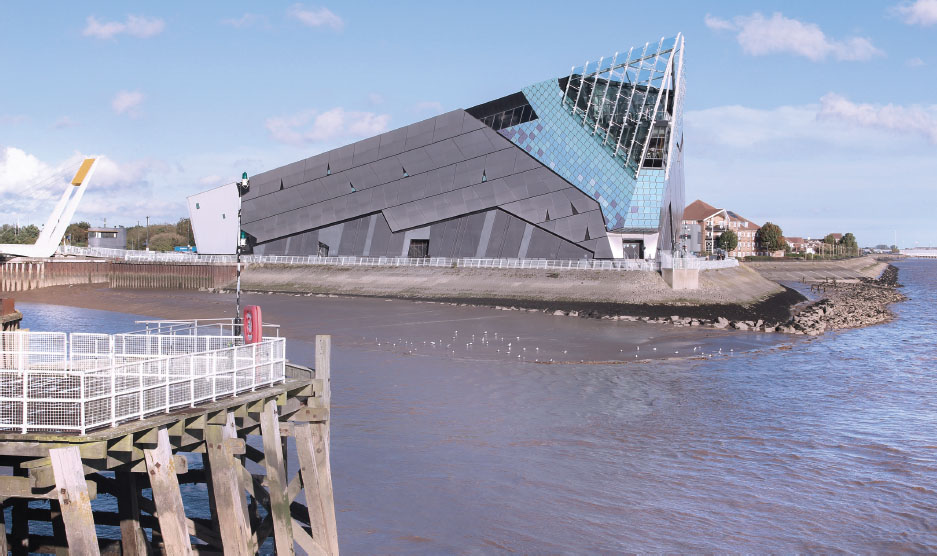 9
Sitting on the point where the River Hull enters the mighty Humber, The Deep is one of the world’s most spectacular aquariums.[/caption]

Among Hull’s most impressive attractions, however, is one of its newest. Shiplike with its prow jutting into the Humber on the riverbank, The Deep is reckoned among the most spectacular aquariums in the world. Home to more than 3,500 fish and marine mammals (and penguins), The Deep was Britain’s second-largest Millennium project and has won many awards since its 2002 opening. Not surprisingly, it draws visitors from around the country.

Everyone with whom I came in contact in Hull shared that legendary northern friendliness and an optimistic can-do attitude. “Course you can!” was the common response to any appropriate request. I visited with Meredith Trowsdale and Ben McKnight from the collaborative of Visit Hull and East Yorkshire and the busy Hull 2017 organizing office. They embodied that enthusiasm that I felt everywhere in the city and briefed me with pride on the year’s events.

With a funded budget of 32 million pounds, Hull 2017 is determined to make the most of its opportunity in the national spotlight. Divided into four themed seasons, the program of Hull’s City of Culture year contains 365 days of theater, music, performance art, exhibitions and cultural festivals in every local neighborhood focusing on the unique character of the city, its people and history, as well as Hull’s contribution to the development of Britain’s arts and creativity. Check out the kaleidoscope of events throughout the year at hull2017.co.uk and hie thee to Hull.

Yes, the rainbow is shining for a city coming out of the shadows. The City of Culture promises to have a busy, exciting year. They would be delighted to have you join the party, and the party promises to be worth joining indeed. If you can’t fit Hull onto this year’s travel calendar, however, do add a stay onto your shortlist of must-see destinations in Britain. Hull is a spectacular visit!


Unquestionably the best located hotel is the Holiday Inn Hull Marina, sitting smartly adjacent to the marina, across the street from Princess Quay shopping and just a few short blocks from the Old Town. Expect it to be busy. Hotel options, however, ring the city center, including Premier Inn and the Mercure Royal Hull Hotel.

Dining options abound in Hull. We are assured by multiple sources that The Lion and Key pub is hands-down the place to get fish and chips. For a bit more atmosphere, try Hull Marina for the 1884 Wine and Tapas Bar, and Al Porto, a surprising Italian seafood and steak house, or fine dining at the 1884 Dock Street Kitchen.

Find lodging, dining and attraction details for visiting Hull and the surrounding riding of East Yorkshire at visithullandeastyorkshire.com. 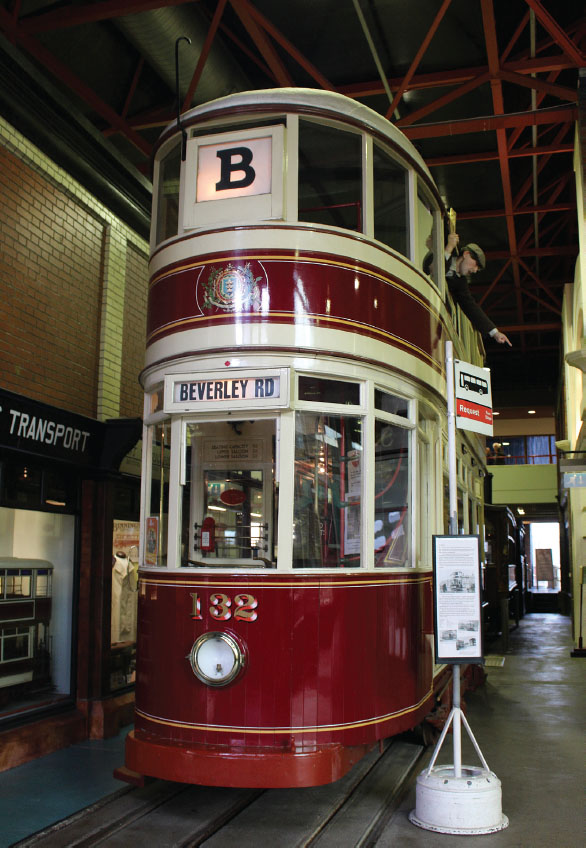 9
The Streetlife Museum, adjacent to the Wilberforce House, sets the scene with every form of transportation through 200 years.[/caption]