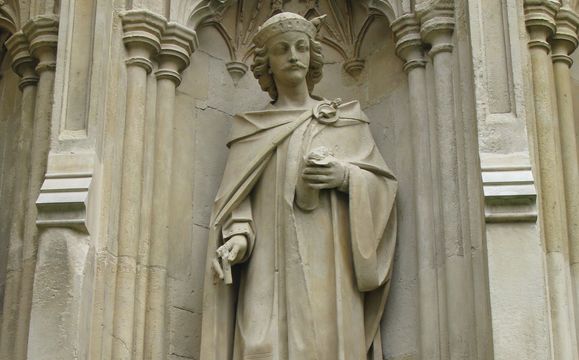 A missing monarch! A statue of Henry I at Canterbury Cathedral. GFDL/ CC

To misquote Oscar Wilde, to lose one king may be regarded as a misfortune; to lose more looks like carelessness. Since the rediscovery of King Richard III under a Leicester car park, in 2012, attention has shifted to Britain’s other missing monarchs – and there is a surprising number of them. Join us as we interrogate the legends and examine the evidence to discover the potential whereabouts of some of the most interesting stray sovereigns. Will one of these be the next rediscovered royal?

The youngest son of William the Conqueror famously breathed his last after gorging himself on a surfeit of lampreys against the advice of his doctors and was buried under the high-altar in Reading Abbey, a monastery established on land that Henry gave to the Cluniac order. But it all came crashing down during the Dissolution of the Monasteries, when Reading’s last abbot was hanged, drawn and quartered in front of his own monks.

The monastic buildings fell into disrepair and gradually disappeared as stone was robbed for other projects, meaning that the grave of Henry I was lost to the fog of history. However, a recent project to survey the former abbey with ground-penetrating radar indicated the position of the eastern end of the church under what is now the car park of now-closed, Reading Gaol. Most intriguingly, archaeologists identified three potential grave slots. Two are positioned beside each other towards the eastern wall of the apse; the third is slightly further west, half-buried under a wall. If he is buried in one of these, Henry could be the next king in the car park.

The king’s last resting place may still evade us, but it is possible to explore the abbey he endowed. The ruins of the south transept, chapter house and inner gateway have been recently restored and are the centrepiece of Forbury Gardens, while the old hospital has been converted into a kindergarten. Catholic worship continues on the site at St James’s Church, partially built using stone robbed from the demolished abbey.

Don’t forget to look up as you admire the high-altar in Winchester’s fabulous cathedral. The six wooden chests on top of the presbytery screen supposedly contain the bones of several high-status individuals from Saxon England, including kings Egbert, Eadred and Canute. All were originally buried in Winchester’s Old Minster and placed in the mortuary chests when the present Norman cathedral was built nearby. Although the bones were briefly removed during the Civil War, when Puritan soldiers used them as missiles to break the stained glass windows.

Recent radiocarbon dating of the bones proves that they do indeed date from the Saxon period, although matching the scattered remains to specific individuals is almost impossible – all, that is, except for the single adult female skeleton. Archaeologists propose that this is Emma of Normandy: twice queen consort in the reigns of Aethelred the

Unready and Canute, and twice queen mother to Harthacanute and Edward the Confessor. Research continues to try and confirm whether one of the most influential Saxon women has been rediscovered. 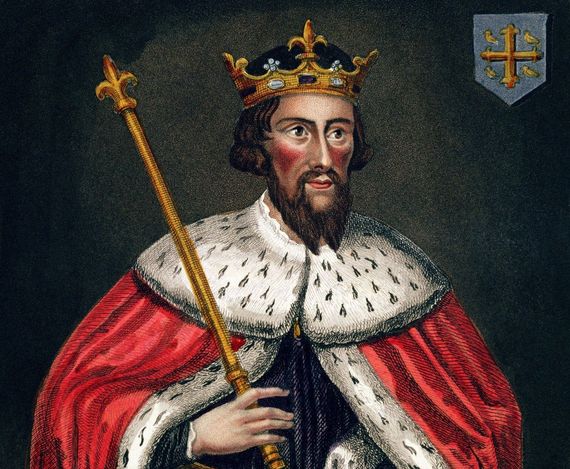 Being the most famous of England’s founding fathers did not stop Alfred going AWOL in the afterlife. Initially interred in Winchester’s Old Minster, his body was moved after four years to a new church. Some 200 years later the monks moved to Hyde Abbey and took Alfred with them again. His grave was left untouched during the Dissolution of the Monasteries, only to be dug up by convicts who were put to work building their own prison on the site, in 1788. A number of bones have since been recovered but the chances of positively identifying any of them are slim.

Poor James IV of Scotland. Not only was he the last British monarch to die in battle, at Flodden in 1513, but his corpse was taken back south by the victorious English Army. Initially left unburied at Sheen Priory, in Surrey, probably because he had been excommunicated, some think James was eventually buried at the Church of St Michael, on Wood Street, in London. That was demolished in 1897 meaning that the Scottish king was probably dug up and reburied in a mass grave at Brookwood Cemetery with hundreds of others.

Such an ignominious end didn’t sit well north of the border, so the fate of James IV led to a number of fantastical legends that the king ended up back in Scottish soil. Among the places to have claimed him over the centuries are Holyrood Abbey, Roxburgh Castle, Berry Moss and Hume Castle, where the king seems to have ended up in a well. By all means search for him at these lovely places but remember that James IV is almost certainly somewhere in the capital of the auld enemy.

There are few mysteries more fascinating than the Princes in the Tower. While preparations for his coronation were finalized in 1483, 12-year-old Edward V was placed in the Tower of London by his uncle and Lord Protector, Richard, Duke of Gloucester. A little while later, Edward was joined by his nine-year-old brother, Richard, Duke of York. Within a couple of months, the reigning monarch and

the next-in-line to the throne disappeared, allowing the Lord Protector to take the crown as Richard III.

Were the young princes murdered by their devious uncle? Or did they survive more than two years in captivity until after the Battle of Bosworth, only to be killed when Henry VII took the throne?

When builders discovered the skeletons of two children in the White Tower in 1674, Charles II decided that they must be his royal ancestors and ordered their reburial in the Henry VII Chapel, at Westminster Abbey. However, a second possible location was accidentally uncovered by workmen when a small tomb containing two children was found in St George’s Chapel and Windsor Castle, in 1789. The young royals who were supposed to be interred there – George, Duke of Bedford and Mary of York – were found elsewhere. Could these unidentified youths in their place be the Princes in the Tower?

Modern scientific analysis could reveal whether any of the bodies belong to the princes, although the Church of England and the royal family have denied all requests to exhume the bones from both sites. Until they do, amateur sleuths must make do with visiting the potential graves sites at Westminster Abbey and St George’s Chapel and the possible site of their murder in the Tower of London.

Stephen did not just struggle to hold the English throne during his lifetime; he also struggled for peace after his death.

Initially buried in an abbey he founded – Faversham in Kent – his tomb was lost after the monastery was dissolved under Henry VIII.

Although Stephen’s grave was rediscovered by archaeologists in 1964, it was intriguingly empty. Local legend suggests that the bones were dumped in a creek before being retrieved and reburied in the nearby parish church. There is indeed an ornate canopy tomb with no inscription upon it in the Church of St Mary of Charity – is this the last resting place of a lost king?