Was JFK more British than he was Irish? 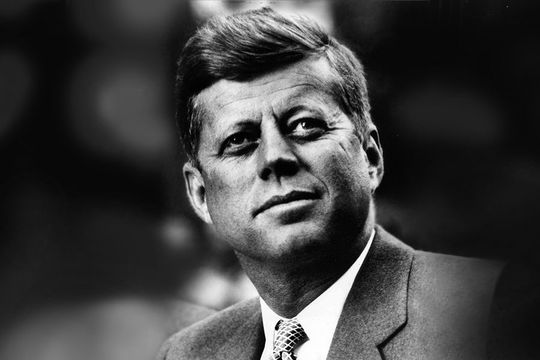 America’s most famous Irish son loved all things English, so is that why some experts claim he's more British than he is Irish?

President John F Kennedy was the first Irish Catholic president of the United States, a son of County Wexford and icon for the Irish American community, but was he, in fact, more English than Irish? His political sidings, personal heroes, favorite books and relationships seem to prove that JFK was a total Anglophile, rather than a Hibernophile.

A new book, "Union Jack," by Christopher Sandford, reminds us of Kennedy’s pronounced love of all things English. In the book Sandford quotes Thomas Kiernan, Ireland’s Ambassador to the United States during Kennedy’s years at the White House. He said JFK was “more British than Irish … Kennedy’s first reaction, if there were any even minor dispute between Britain and Ireland, would be to side with Britain.”

It seems a jarring contrast to read such an admission about a man who wore his Irish roots proudly. Kennedy’s family traces their roots back to Dunganstown in County Wexford. Patrick Kennedy, JFK's great-grandfather left Ireland during the Great Hunger in 1848, a fact mentioned regularly in speeches by a man whose success represented a breakthrough in status and prestige for the Irish in the United States.

President John F Kennedy gets a warm reception from the people of Ireland in 1963.

JFK’s Anglophilia was not only evident through his political leanings but in many facets of his life. When journalist Hugh Sidey, author of "John F. Kennedy, President," asked him for a list of his favorite books he listed David Cecil’s "The Young Melbourne" as his number one read. "The Young Melbourne," first published in 1939, is the biography of the English politician William Lamb.

Kennedy’s 20th-century hero is said to have been Winston Churchill, even though his own father, diplomat Joseph Kennedy, and the English hero did not see eye to eye. Kennedy took a great lesson from the failure of the 1930s appeasement policy with Hitler, one that informed the President’s foreign policy perspective for the rest of his life.

JFK’s life with the English

JFK also briefly attended the London School of Economics in 1935, where he became enamored of the English way of life. There he experienced lively political discussions and eccentric characters. He visited country houses, attended parties, with champagne, gossip, free-spirits and English women.

One of England’s richest and most influential aristocratic families, the Cavendish's, became one of his favorites. Kennedy’s sister, Kathleen, eventually married into the family. In fact, Andrew Cavendish and his wife Deborah Mitford were guests at JFK’s January 1961 inauguration.

Probably one of Kennedy’s closest friendships was with David Ormsby-Gore, who he met in 1938. Vice-President Lyndon Johnson referred to Ormsby-Gore as “the limey.”

Sandford describes his meeting with Ormsby-Gore taking place “in the midst of an academically glittering if debauched, undergraduate career at Oxford.” The pair were friends right up until Kennedy’s death in 1963.

His love for things English did not mean that John F. Kennedy rejected his Irish heritage. To him, there was no conflict.

He was clearly passionate and affected by his Irish roots. Sandford refers to the President’s 1947 trip to Ireland when he stayed at the Cavendish’s Lismore Castle. His visit was to allow him to track down his relatives in Dunganstown, Wexford. When he found the farmhouse, so the story goes, he held his hand out and introduced himself as “your cousin John from Massachusetts.”

John F Kennedy having a cuppa in his ancestral home in Wexford in 1947.

Despite his Irish roots and personal closeness to Ireland, Kennedy managed to avoid the subject of partition and Ireland’s unification. At a 1954 New York St. Patrick’s Day dinner one attendee described his reticence on that subject as being like “eating your soup with a fork.”

Famously, in the June of the year of his death 1963, the President returned to Ireland. He was welcomed by the President of Ireland Eamon de Valera as a “distinguished son of our race.” Ireland was proud of his presence and a he seemed comfortable in his ancestral home. The trip is still celebrated today.

The trip was such a success that it was rumored that Kennedy would live in Ireland after his time in office. It was de Valera who nixed the idea saying “there was no real sense of connection” and “that what we saw was the president’s charm and good manners rising to the occasion, not him preparing the groundwork to live here.”

Whether he loved England or not it’s clear that his Irish roots and his family’s story meant the world to the United States' first Irish Catholic President. Kennedy held the Irish flag high until the end and he even had Danny Boy played at his funeral!

What do you think? Was John F. Kennedy a true Anglophile? Does it matter? Let us know below.

Taken from IrishCentral, in April 2019.