Where lovers run to wed - a history of Gretna Green 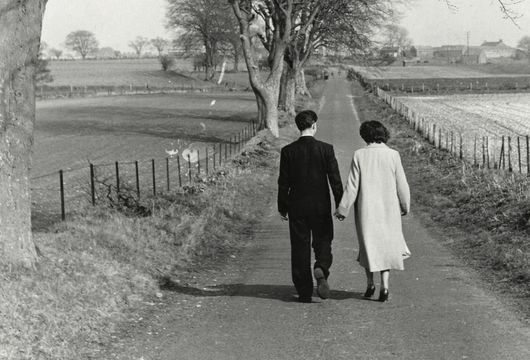 The town across the Scottish border where star-crossed lovers eloped to, Forbes Inglis takes a look at Gretna Green, the little Scottish village of love.

For 265 years Gretna Green in Dumfries and Galloway - not to be confused with the nearby village of Gretna - has been welcoming couples looking to marry. Initially, that was due to differences between Scots and English Law but, although that has changed, stories of love, romance, and instances of scandal, have continued to be associated with Gretna Green.

Scotland and England were ruled by a single monarch until James VI of Scotland became James I of England, upon Elizabeth I’s death in 1603. However, it was only when the Act of Union was passed, in 1707, that they were united under a single parliament. One of the provisions of that act was that Scotland would retain its own legal system, a situation that pertains to this day.

In the first half of the 18th century, there had been considerable problems in England where irregular marriages, often conducted by unauthorized celebrants, had allowed fortune hunters, bigamists and others to marry young heiresses with a view to gaining control of their fortunes. To resolve the problem of such marriages, Lord Hardwicke introduced a law in 1754, prohibiting anyone under 21 years of age - almost invariably the young woman - from marrying without parental consent in England. 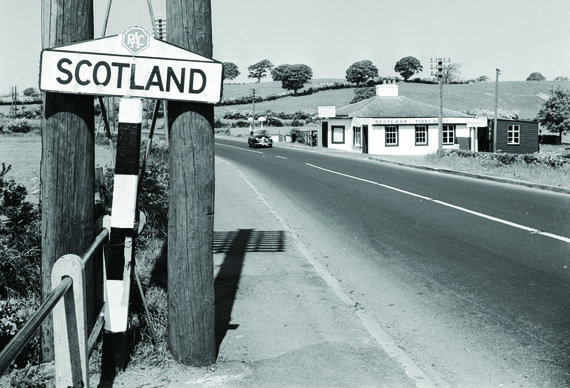 However, true love will always find a way and that way was the road to Scotland where the marriage laws of the period still allowed young people to marry much earlier and without the need for consent. In fact, Scots Law allowed girls of 12 and boys of 14 to marry until it was raised to 16 in 1929.

The first village many eloping couples from England came to in Scotland - whether by stagecoach or later by train - was Gretna Green. One of the focal points of village life then was the blacksmith’s shop or smiddy, so that was often where the couple would appeal for help. Marriage in Scotland then simply required a declaration in front of two witnesses so it was simple to tie the knot without undue delay, an important factor, if an irate parent was in hot pursuit, hell-bent on stopping the union.

The effect of Lord Hardwicke’s Law was a steady flow of lovers from south of the border all looking to marry before the arrival, usually although not always, of the bride’s father and his friends.

Before long, Joseph Paisley, the local blacksmith, recognized a wonderful business opportunity and a marriage industry was established in the village. Paisley himself conducted weddings for some 60 years and became the first in a long line of the men who became known as anvil priests. 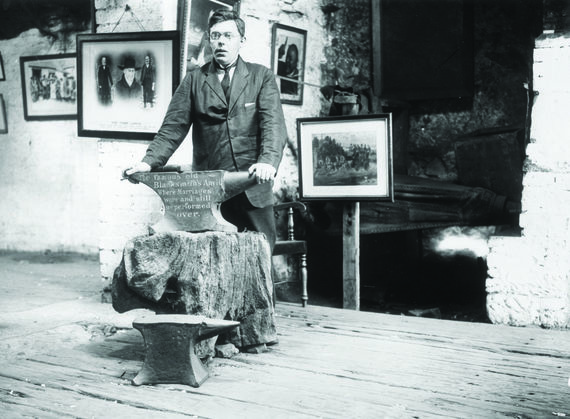 June 1929: Rochard Rennison blacksmith at Gretna Green with the old anvil over, which he is licensed to marry people.

The last one, Richard Rennison, presided over 5,147 marriages during a 14-year-long career. Faced with angry parents he would deny ever having seen the happy couple and when faced with criticism from the Church and other authorities he would protest that his surname read backward spelled out “no sinner”.

There were only two questions for the prospective bride and groom; “Are you of marriageable age? Are you free to marry?” On hearing their assent the blacksmith would strike the anvil fiercely with his hammer and pronounce them “man and wife”.

Needless to say, there are many stories about eloping couples and their pursuers. No doubt many couples were caught and returned to England before they could marry but thousands more obviously managed to elude their pursuers and make it to Scotland to become husband and wife.

There was a tragedy in one case which ended in the death of one of the pursuing party. In 1771, John Edgar and Jean Scott, a young couple from Cumbria, decided to elope to Gretna Green. They set off for Carlisle on horseback but Jean’s father knew the area well so he was able to overtake them and prepared an ambush.

There was generally a lot of sympathy for young lovers and they were warned that Jean’s father lay in wait further up the road. Forewarned, they made for the coast where they managed to get a boat to take them across the Solway Firth, the stretch of water between Cumbria and Scotland. 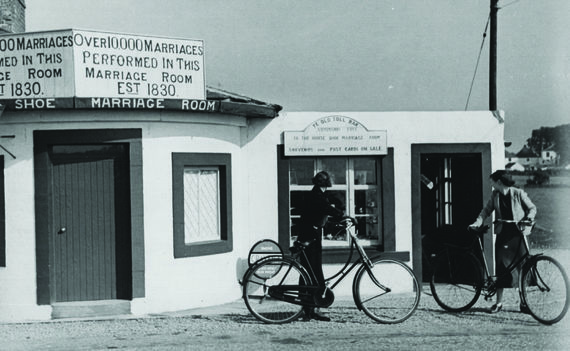 Two girls looking at the first marriage-house at Gretna Greene, circa 1950.

Realising what had happened, Jean’s father also hired a boat and set off in pursuit. Unfortunately, a storm blew up and the boat in which Jean’s father was travelling overturned and one crewman drowned. The pursuit was abandoned and Jean and John made it safely to shore and were married the following day, by Joseph Paisley.

Not all the lovers were quite what they seemed. In 1826, a scandal erupted when it became clear that a scoundrel called Edward Wakefield had tricked a young heiress into marrying him in Gretna Green.

Ellen Turner, the 15-year-old daughter of a wealthy English mill owner, was convinced by Wakefield that her father’s business had failed and that the situation could only be saved by her father’s money being transferred to her. Unfortunately, because of her age, she would have to be married and her father had suggested he should become her husband. Of course, the whole story was a complete lie but Ellen, completely taken in and somewhat flattered by the attentions of the smooth-talking Wakefield, agreed.

The couple were married at Gretna Green and made their way to France where Ellen’s uncles caught up with them. They returned to England where Wakefield was put on trial for fraud and sentenced to three years imprisonment.

Needless to say, the unfortunate Ellen was devastated about her own situation but Parliament was petitioned and they agreed her marriage should be annulled.

There were elements of farce too, such as the runaway marriage of Lord Thomas Erskine, the Lord Chancellor, and his housekeeper, in 1818. Lord Erskine, a widower aged 66, already had two illegitimate children with his housekeeper, a woman 30 years his junior. Under Scots Law, any subsequent marriage legitimized such children so that may have been the couple’s motive. On this occasion, however, the objections didn’t come from angry parents but from Erskine’s son, by his first wife, who no doubt feared that his legitimized siblings might threaten his inheritance.

For some reason, Erskine travelled dressed as a rather flamboyant looking woman and it was only when the rather bewildered anvil priest was about to marry the couple that he divested himself of his strange attire. Erskine’s son turned up shortly after the wedding and he cursed his father’s new wife before lunging at her. The new Lady Erskine proved to be a match for her stepson and before long the pair were grappling with each other on the ground, much to the amusement of the villagers who had gathered for the ceremony.

The coming of the railway to Gretna Green in 1848, simply served to increase the popularity of anvil marriages. In 1857, however, in response to overtures from conservative interests such as the Church of England,  Lord Brougham’s “Cooling Off Act”, which stipulated that couples had to be resident in Scotland for three weeks before they could marry, came into force. Unsurprisingly, Gretna Green and the anvil marriage industry suffered badly.

In 1885, Hugh Mackie, a local farmer, purchased the Gretna Green estate and a chance encounter with someone staring intently into the almost derelict smiddy convinced him there was still mileage in the idea. He upgraded the blacksmith’s shop and declared to all and sundry that marriages over the anvil were legal, the only proviso being that the residency rule had to be observed. Before long, the romance of anvil weddings at Gretna Green had regained their popularity.

Other law changes came along. First, in 1929, the minimum age for marriage was fixed at 16 throughout Britain, although parental consent was still needed for English brides and grooms. In 1940, marriage by declaration was finally made illegal in Scotland and could only take place in a church or registry office (for civil ceremonies). Nevertheless, blessings over the anvil remained a popular choice for many couples.

The year 1977 saw the age of consent for couples marrying in England set to 18. Brougham’s “Cooling Off Act” was finally repealed and religious ceremonies could be carried out at other venues in Scotland, not just in a church.

Further legislation, in 2002, permitted weddings to take place at venues other than registry offices. Three years later same-sex couples in Scotland were able to enter into a civil partnership and since 2015 they have been allowed to marry.

Today Gretna Green remains a popular destination for couples looking for a romantic wedding - religious or civil - as well as those seeking to renew their vows. Many couples previously married at Gretna Green return there for major wedding anniversaries. They can also have their marriage blessed over the anvil, either informally by a guide or formally by a local minister or priest... and be serenaded by a piper. Alternatively, couples can take part in a handfasting ceremony - an informal ceremony that literally involves tying the knot as the two are “bound” together.

Gretna Green is a fascinating venue, with its anvil wedding museum, an amazing display of horse-drawn carriages, as well as offering a comprehensive selection of Scottish food and well-known branded goods.

The reasons for marrying at Gretna Green may have changed over the centuries but it retains its romantic associations and still sees proportionally more weddings each year than any other comparable district in Scotland. Hugh Mackie had indeed seen the future;  love and romance are still alive and well at The Blacksmith’s Shop in Gretna Green.