Ahead of the times in the mill town New Lanark 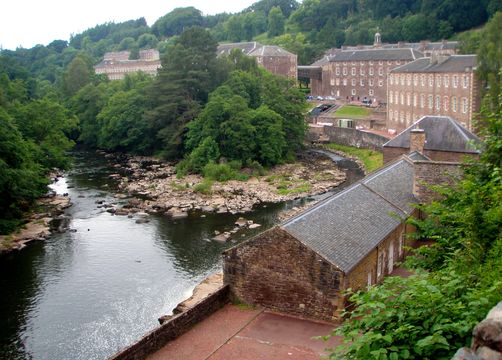 We keep hearing that our children have never had it so good and that the young of today are cosseted in ways we could only dream of. The truth is that, although many things have improved over the years, it took people with real vision to change life for our ancestors. A case in point can be found at the New Lanark mills in southwest Scotland.

Back in the late 1700s, water was the source of power for industry, and two entrepreneurs, Scottish businessman David Dale and Englishman Richard Arkwright, the inventor of a working spinning frame, saw the potential of the fast-flowing waters on the upper reaches of the River Clyde. The invention of machines, as distinct from individual spinning wheels, gave rise to the Industrial Revolution and the resultant factory system. A water wheel could power a drive shaft that could be harnessed to power many such machines.

Before long, New Lanark was one of the largest spinning mills in Britain with a workforce of almost 1,200, some 800 of whom were children. More than half had not even reached their teens and the youngest were just 6 years old. This was not unusual for the times, but what made New Lanark different was Dale’s treatment of the child workers. The standards of Dale, and later his son-in-law, Welshman Robert Owen, were certainly not remotely like those required by law today, where the employment of children, where permissible, is, just like the working conditions of adults, strictly controlled.

Many of the more enlightened advances were down to Dale’s son-in-law, Robert Owen, the man rightly credited with the conditions at New Lanark. By the late 1700s, Dale was seeking to sell off his interest in New Lanark. Owen had fallen in love with Dale’s daughter, Caroline, and also saw an opportunity to engage in a social experiment he had been considering. Dale, not having a son, wanted Caroline to take over the business and was not impressed by the baby-faced Welshman. He wanted Caroline to marry “an honest Scotchman.”

Despite Dale’s concerns about Owen, the mill was eventually sold to him and his business partners for the sum of £60,000. Dale changed his views on the romantic side, too, and Robert and Caroline were married in September 1799.

Initially, Owen was not well received at the mill. Having business partners, he was unable to set about his social experiment immediately and his first “reforms” were based on profitability rather than any thoughts of social improvement. He increased the daily hours from 13 to 14 hours per day and monitored individual output. One social change he did make was to introduce watchmen to patrol the streets looking for drunken behavior. To accompany this, he introduced a strict three-strikes-and-out rule; any employee found drunk on three occasions was fired.

By 1806 Owen’s reputation had improved, partly due to a U.S. embargo on the export of cotton, which forced the price of the raw cotton to levels that made manufacturing uneconomical. Owen, however, continued to pay his workforce. In some ways, this still made economic sense; he knew that once conditions improved he would not have the problem of trying to recruit new or train inexperienced workers and all the costs that would involve.

The threats to Owen’s ideas came from his hard-headed business partners, who were interested in the return on their money rather than social experiments. Owen was not to be thwarted, however, and he went to London, where he found a number of potential investors, mostly Quakers who had similar social views to himself, although he had no interest in religion.

When Owen and his new partners arrived at New Lanark they were treated as heroes, the workers unhitching their horses and pulling the coach themselves for the last mile into the village.

Owen then had a free hand to run the company more or less as he pleased. There had been great progress in the technology in the textile industry, but Owen’s philosophy was based on the concept that treating workers well would result in greater productivity. He introduced four overlookers who administered the “silent monitor” scheme. The silent monitor was simply a small block of wood with four different colored surfaces—black, blue, yellow, and white. A block was hung over each employee’s workstation showing how they had performed on the previous day. Black meant poor work, blue was indifferent, yellow represented good, and white for excellent. This meant that Owen could walk through the mill and identify individual workers and instantly recognize their commitment or lack of it.

Read more: Kirkwall - the bustling capital of the Orkneys

Owen also set up a village shop where employees could purchase quality food and goods that were sold at a minimal profit. Previously, the workers had only been able to purchase poor quality meat at high prices, often taking themselves into debt in the process. Setting up a company shop also enabled Owen to control the sale of alcohol, drunkenness being a common problem among the poor people of the day. Another welfare measure he introduced was a sick fund to which each worker contributed one-sixtieth of their pay, and he also established a Savings Bank to encourage thrifty habits.

Families lived in what we would now consider to be poverty conditions, but back then the workers’ houses were superior to living conditions elsewhere. Employees and their families had the benefit of running water and free electricity from 1895 onward. That allowed them to light a single bulb that was replaced by the company whenever it burned out. Unsurprisingly, the more enterprising employees adapted the system to power radios and electric irons. Later, every two families had a shared toilet. That might sound dreadful to us today, but then it was an advanced idea.

Of course, families in those days often consisted of a couple with a large number of children. Although pretty basic to us, conditions in New Lanark’s housing was an improvement on how the poor lived elsewhere. The adults slept in a box bed, effectively a large cupboard open to the room. Two other beds, built on wheels, were stored underneath and they could be rolled out in the evenings, and that was where the children slept, as many as four to a bed.

The New Lanark workers were not particularly well paid, even by the standards of the time, although larger families could earn £2 in total. The other perks: their rent was only 2 shillings (10 pence) per week and around 10 shillings (50 pence) could be saved on the weekly shop at the company store. These more than made up for any shortfall.

It was Owen’s interest in the education of the young, however, that had the greatest long-term benefit for his youthful employees and their younger siblings. In 1816, he set up the school and the New Institution for the Formation of Character. He built on Dale’s system and started a movement that was copied throughout Britain, Europe, and the Americas. The school was attended by 274 pupils with 14 teachers giving tuition in various subjects. During the summer months, the children were in school from 7:30 a.m. until 5 and in winter from 10 a.m. until 2 p.m. The starting age for children was 18 months and they stayed at school until they were 10 or 12. This might appear as if it was reducing the 19th-century labor force, but it allowed mothers of young children to work in the mill. Among the subjects taught were nature study, geography, and history. They also learned to dance and sing.

The older children, aged 10 to 20, were expected to work all day, but they, too, attended classes in the evenings. Unlike Dale, Owen was not a great believer in books and reading, but he eventually gave way to pressure from the parents on the matter.

Of course, Owen lived in his own grand house at the mill, where entertaining guests and taking afternoon tea were the order of the day. (The workers were fascinated by a house that contained “more rooms than people”). His young children played in a nursery and his three daughters were taught embroidery. Young women of the time were generally only permitted to take part in genteel pursuits. The Owen family would have been served hand and foot by a whole team of servants responsible for cleaning, cooking, and generally looking after the house and its occupants.

Whatever we might think of them today, the workers’ conditions at New Lanark were very ahead of their time and much better than those experienced by factory employees elsewhere. Owen believed that by treating his workers well he would get more production. He did not believe in punishment in the form of beatings or even severe verbal criticism.

Owen spent some time in the U.S. and helped in the establishment of a similar project called New Harmony in Indiana. The project failed, although several of Owen’s ideas continued to be used. His four sons and Jane, his only surviving daughter, all settled in the States, where they played important parts in the development of their new country.

Although Owen left New Lanark in 1825, New Lanark continued to be a model of good practice, not just for the whole of Scotland, but for the world, right up until the mills finally closed in 1968. But that is not the end of the story. A number of groups and concerned individuals came together to ensure that the story of New Lanark and its legacy have been preserved for future generations, giving people the opportunity to visit the schoolroom, watch a spinning mule in action and see the very different lives of 19th-century workers and their bosses.

Read more: “Scotland in miniature" - the Isle of Arran 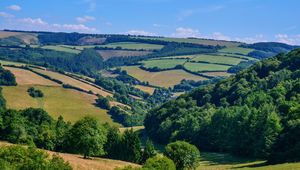