“Scotland in miniature" - the Isle of Arran 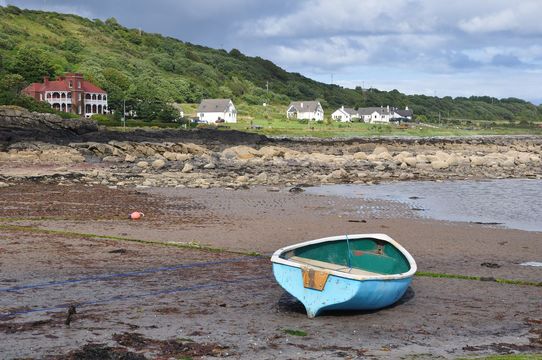 Scotland – a large and diverse country with majestic landscapes, a colorful history, and glorious fare, all of which means that one visit will never be enough. Yet there is one cheat to enable the time-starved to see all that Britain’s northlands have to offer in a single whistle-stop tour: take a trip to the place that calls itself “Scotland in miniature”, the Isle of Arran.

“The fortunes of the Hamiltons continued to rise until, in 1542, the second Earl of Arran found himself heir to the throne behind a six-day-old Mary, Queen of Scots. For the next 12 years, he was Regent to the young queen and the most powerful man in Scotland.”

Getting to the Isle of Arran

The majority of the residents of Arran work in the tourist sector, so you can be sure of a friendly welcome.

The regular ferry service leaves the mainland at Ardrossan and disembarks at Brodick, on Arran’s east coast, just 55 minutes later. Given that Adrossan is less than an hour from Glasgow, there is no easier or quicker way to sample a taste of life in the Scottish isles – early birds can slumber in Glasgow and still be on the island by 8 o’clock in the morning. 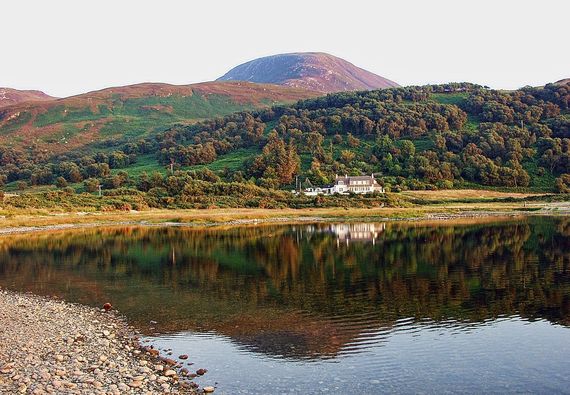 Brodick is little more than a one-road village along the coast with a small harbor where the ferry docks a few times every day. Still, it’s best to pick up any essential supplies here since you won’t find many shops once you venture further afield.

Start by travelling a couple of miles out of the village to Brodick Castle, the top of which peeks invitingly from the trees as the ferry docks. The castle was given to the first Lord Hamilton by King James III and the royal favors continued for the following generation: the next king granted the prestigious title of Earl of Arran to the next Lord Hamilton. The fortunes of the Hamiltons continued to rise until, in 1542, the second Earl of Arran found himself heir to the throne behind a six-day-old Mary, Queen of Scots. For the next 12 years he was Regent to the young queen and the most powerful man in Scotland.

Don’t expect to see much of the castle that the Regent would have known – the renovation of the Brodick estate was a pet project of the eleventh Duke of Hamilton, who redesigned the castle and tripled its size in 1844. A further rejuvenation under the aegis of the National Trust for Scotland is currently ongoing and the reopening of the castle in spring 2019 is eagerly awaited, although for those who cannot wait, the surrounding country park is open all year round. Here you’ll find both formal Victorian gardens and quiet woodland trails from where you can spot Scotland’s iconic red squirrel. 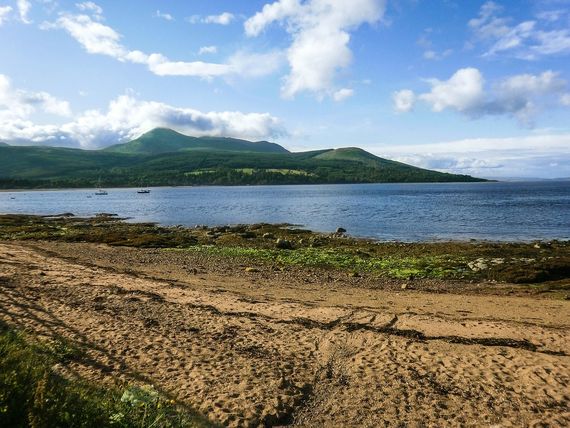 The coast at Brodrick on the Isle of Arran.

Leaving Brodick Castle behind, the best way to see the rest of Arran is by turning onto the A841, the main road circling the island. It’s hardly a highway – the road is never more than one lane in each direction, and it twists and turns as it follows the coast – but it still only takes two or three hours to circumnavigate Arran by car, and there is plenty to see.

Heading south, you’ll pass through lush and rolling fields. Arran was once a breadbasket of the Firth of Clyde with its fertile soil used to grow barley, oats and potatoes by families of farmers and crofters. That all changed when the island passed into the ownership of the tenth Duke of Hamilton, who embarked on a land modernization scheme that consolidated smaller farms into larger conglomerates for sheep rearing.

The Duke was motivated by the promise of earning more money – much of which was subsequently spent by his son in the rebuilding of Brodick Castle – but the old farming families were shipped off to Canada with promises of swathes of land that often turned out to be false. Just like on the mainland, the clearances was a controversial period of history that saw wholesale changes in society resulting from the forced evictions.

A memorial to those who were displaced can be found on a quaint green opposite picturesque thatched cottages in Lamlash. With a population of 1,000 or so, Lamlash is as urban as it gets in Arran – this isn’t an island for those who like to vacation in the bustling city. Instead, return to the main road and continue through the coastal countryside, taking in the splendid views of Ailsa Craig, the hump of granite in the water to the south.

Ailsa Craig’s blue granite is quarried to make the stones vital to curling, a sport that vies with golf as the Scottish pastime, but dotted around Arran are examples of stonework that is far older. Neolithic chambered cairns, stone-slab chambers covered in earth, can be seen at Monamore Glen and Giants’ Graves, to the west and south of Lamlash respectively. As the name of the second suggests, the cairns were used as burial monuments in the distant past.

To investigate the best of Arran’s prehistory, park up near Tormore on the west coast and take a short stroll inland onto Machrie Moor. Here, six stone circles offer an enigmatic glimpse into the lives of the first residents of the island.

Archaeologists have discovered that human activity began here around 5,500 years ago and that the stone circles were erected 1,500 years later, two of which replaced earlier timber circles. But why? Did the prehistoric inhabitants of Arran use this place for the burial of their dead, for seasonal rituals, or for something else completely? Chances are you’ll have the place to yourself to ponder what it all means.

The people who built the stone circles must have thought Machrie Moor was a special place. They were correct. It sits upon a vast geological feature known as the Highland Boundary Fault which runs across the island from north-east to south-west, roughly following the line of the winding cross-island road known as The String. The fault line splits Arran into two distinct regions, with the north of the island being very different to the Lowlands to the south. The granite ridges and jagged peaks of the northern Highlands soar from the coast, providing a windswept challenge for scramblers and climbers, but there are also more gentle and accessible glens running through the hillsides for those who want less of a test.

Further along the coast road from Machrie Moor lies Lochranza, Arran’s most northerly village, nestling at the bottom of the steep Highlands on the north-west coast. The natural harbor of the sea loch was considered such an asset that a castle was built to secure it in the 13th century by Clan Sweeney and, in 1306, Lochranza Castle was used as a stopping-off point by her most famous visitor when Robert the Bruce returned from Ireland to claim the Scottish throne. Nearly two centuries later, James IV used the castle as a base in his campaign against Clan Donald, the powerful Lords of the Isles who peskily asserted their independence from the king’s overlordship until the might of the royal army was brought to bear.

In these less violent times, the Arran Highlands are the best place for those who enjoy lacing up their walking boots and exploring a place through the soles of their feet. A short stroll of 30 minutes or so from Brodick takes you into the glens where it’s possible to catch a glimpse of golden eagles and red deer. If you have half a day to spare, keep going for another couple of hours and you’ll reach the peak of Goat Fell, Arran’s highest point. Take a look around and bask in the full glory of the undulating landscape carved by glaciers. Kintyre and Jura can be seen to the north-west, mountainous Ben Lomond rises to the north-east, but the best view is to look back from where you have come, down to the harbor and village of Brodick. The only problem is that you must retrace your steps with tired legs!

After all that hard work, it’s time to relax with a wee dram of Scotland’s finest export. Hopefully, you took the time to call into the Isle of Arran Distillery in Lochranza to pick up a bottle of the island’s distinctive single malt. Tours of the distillery leave from the visitor centre and the knowledgeable and friendly guides explain how the geography of Arran – its water, air, and microclimate – makes its way into the finished product. Whisky experts will be delighted to discover that there will soon be a chance to test Lochranza’s tipple against a sister whisky from the other side of the Highland Fault since a second distillery is soon to open at Lagg on the southern tip of the island. Those who aren’t so bothered about the golden nectar will still enjoy the fare on offer in the Casks Café, and there is a well-stocked shop to take a bottle or two – the perfect antidote for those sore feet after a day pounding up Goat Fell.

Whether you’ve dashed around Arran in a day, opted for an overnight stay or extended your visit for longer, this small island – just 20 miles in length – offers a microcosm of the nation in which it sits. Highlands and lowlands? Check. Clearances and clan warfare? Check. Single-malt whisky? Check. Arran might only encompass half a percent of Scotland’s total area, but it includes a full complement of her charms.