The famed despot behind the mutiny on the Bounty, Lt. William Bligh 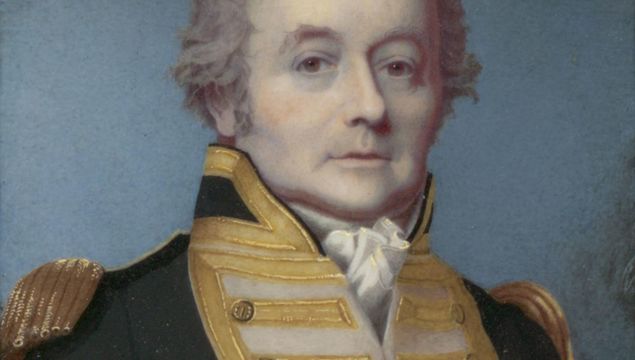 Incredible the mutiny of 1789 on the Bounty was only one of three set against Lieutenant William Bligh but was his a victim or a villain.

When Lieutenant William Bligh set sail for the East Indian island of Timor on 28th April 1789, he commanded an 18-man crew in a perilously overloaded 23-foot launch. The extremely hazardous 3,600-mile voyage he was facing had been forced upon him by his second-in-command, Fletcher Christian of His Majesty's Armed Vessel Bounty, who set him adrift following the famous mutiny. Remarkably, on 12th June, after fending off starvation and murderous Polynesian natives, Bligh arrived safely at his destination. Whatever flaws there may have been in his character, he was an exceptional navigator.

Questions about Bligh's supposedly despotic conduct during his command of the Bounty have been inconclusively debated ever since the mutiny. Whether or not he truly was a tyrant, he seemed to be cursed with a knack for inspiring insurrection. The Bounty rebellion was only the first of three mutinies against Bligh during the officer's remarkable naval career.

On 14th March 1790, Bligh set foot on English soil for the first time since the Bounty had left Spithead on 23rd December 1787. On that day, Bligh had been bound for the romantic isle of Tahiti, where his less-than-glamorous mission was to embark a cargo of breadfruit saplings and carry them to the West Indies where they were to be transplanted. He had been allowed to recommend his own crew and had suggested that his friend, Fletcher Christian, serve as mate to the ship's master.

Upon his return from the ordeal in the South Pacific, Bligh was regarded as a heroic victim. A court-martial cleared him of all responsibility for the loss of the Bounty; he was promoted to commander and then to post-captain. He became the subject of romanticized accounts of the mutiny and was given the chance to return to Tahiti, this time with two ships under his command, in order to complete his original mission.

After succeeding in this second attempt to introduce breadfruit to the West Indies, Bligh again returned to England on 9th September 1793, expecting that his accomplishment would have earned him even greater acclaim. He found, however, that while he was away 14 of the mutineers had been captured and put on trial. The emotional testimony of some of the defendants, along with the efforts of some influential families, including the Christians, had swayed popular opinion against the Bounty's commander.

Unhappily for Bligh, the captain of the expedition that had brought the mutineers to justice had, in fact, treated his captives so brutally that the public began to sympathize with them. Peter Heywood, who had sided with the mutineers but did not play a major part in the crime, presented a lengthy defense of his actions that cast Bligh in a less favourable light than had previous accounts. Though the debate raged inconclusively, Bligh's reputation had been irreparably damaged. Speculation about what could have driven so many respectable men to commit so disgraceful a crime became widespread.

In the 200 years since no one has provided a definitive answer to the questions of whether Bligh was a villain or victim and why the mutiny occurred. Bligh's own assumption was that the mutineers had plotted to overthrow him so that they could return to Tahiti and avoid a comparatively mundane existence in England or the hardships of navy life. If this was so, Christian and his followers realized too late the obvious fact that they could never make Tahiti a permanent home after the mutiny because the British authorities would look for them there. Some of the less prominent mutineers actually did stay on Tahiti, knowing they would be found and taken home to England, where they assumed they would be excused for their minor role in the affair. Christian and eight other ringleaders, however, left Tahiti forever shortly after taking control of the Bounty.

On the other hand, Bligh's conduct doesn't seem an adequate cause of the mutiny either. Christian had sailed with him before without incident or complaint. Far from there being any friction on previous voyages, the two had become friends. Christian seems actually to have been treated with more favour and given more responsibility than his limited experience merited. Bligh was known to have had a foul mouth, but so did most sailors of his day, and mutiny seems too exaggerated a response to attribute to crude language.

Historians have speculated that something else must have happened between the time of the Bounty's arrival at Tahiti on 25th October and its departure on 28th April to make Christian choose to spend the rest of his life as a fugitive rather than cope with his anguish a few months more, after which he could, if he chose, have disassociated himself from Bligh forever.

Intriguingly, Sir John Barrow in his account of the mutiny, published in 1831, claimed that just before Christian left Tahiti for the final time he confided to Heywood a private message:

At that last interview with Christian [Heywood was quoted as saying], he ... communicated to me, for the satisfaction of his relations, other circumstances connected with that unfortunate disaster, which, after their deaths, may or may not be laid before the public. And although they can implicate none but himself ... they may extenuate but will contain not a word of his in defense of the crime he committed...

Like so many of the details of the mutiny, though, Barrow's account has only served to more thoroughly entangle legend and fact. Its authenticity is questionable, and the vague reference to unknown circumstances has given rise to some uninhibited speculation. The most notorious theory based on Barrow's version of the mutiny is that Christian and Bligh were homosexual lovers. The supposition is that Christian reluctantly yielded to Bligh's advances in return for promotions and other considerations, but that his distaste for the relationship finally led to the mutiny. This theory has remained popular, even though there is little or no direct evidence for it.

The controversy surrounding the mutiny, the trial of the conspirators, and Bligh's supposed abuse of Christian did not begin to cool until about 1795. Even though England was at war with France, Bligh was not given an assignment by the Royal Navy until April of that year. He was then awarded the command of a warship and joined the force blockading the Dutch Fleet. During this tedious duty, Bligh fell victim to another mutiny. This time, however, there was no implication that he himself was at fault. The crew of his ship, the HMS Director, treated him no more harshly than any of the other officers who were put ashore when the entire British fleet erupted into mutiny on 19th May 1797.

This second mutiny of Bligh's career, while of much greater consequence to England, involved none of the personal drama that had coloured the Bounty adventure. The Nore mutineers were orderly, politic, and principled, and once their grievances were addressed they returned to duty, except for the few ringleaders who were hanged. Bligh played a part in the resolution of the conflict, a role that did him credit.

Returning to active duty following the mutiny, Bligh, who until then had been known strictly for his feats of navigation and exploration, experienced the glory that comes with participation in a successful military campaign. After commanding a warship at the Battle of Camperdown, he served as captain of the HMS Glatton under Nelson's command at Copenhagen. Coming near the end of a long and tempestuous naval career, the memory of these victories delighted Bligh, and he enjoyed telling embellished accounts of his role to anyone who cared to listen.

In 1804, however, Bligh's temper and indiscreet tongue again caused him trouble. He charged a sailor with malingering and had him arrested. A court-martial found the defendant not guilty of the charge, but, dissatisfied with an acquittal, the sailor accused Bligh of tyrannical conduct so persistently that the captain himself was brought before a court-martial and reprimanded for his behavior.

In the face of this humiliating turnabout, Bligh received an offer that proved too good to be true. A long-time friend with a great deal of influence had recommended him for the governorship of the colony of New South Wales. The pay attached to the officer was much more than Bligh had ever seen as a naval officer, and he seemed well suited to the job.

Bligh eagerly accepted the new post, but when he arrived in New South Wales, he found that conditions were much worse than he had expected. The colony was dominated by an unscrupulous set of hard-drinking rum merchants and a corrupt military establishment. Bligh did his best to introduce order and sobriety to the colony, but the efforts of one man were ineffectual against the local kingpins. When the new governor clamped down on the production of alcohol, the rum-makers resolved to oust him. The military garrison, which itself accounted for much of the colony's rum consumption, joined in the uprising, and for the third time, Bligh faced a mutiny against his authority.

The third rebellion was perhaps as damaging to his reputation as the first. Popular accounts of the mutiny depicted Bligh hiding under the bed in the Governor's House during the uprising. While fictional, the incident was accepted as true back in England. Later, with order finally restored by a new military governor sent from England, Bligh returned home once again to face yet more courts-martial.

The leader of the mutineers was cashiered from the British Army, and Bligh subsequently applied for and received a promotion to the rank of Rear-Admiral of the Blue. But the latest in his series of unfortunate confrontations had left him finally discouraged. His wife, emotionally spent by the constant attacks upon her husband and her own efforts to comfort him, died shortly afterward. Bligh spent his last five years in Farningham, Kent, cheered by the company of his daughters. He never went to sea again.

Though deeply saddened by the loss of his wife, he may have found this to be the most contented part of his life. As stormy as Bligh's professional career had been, he had always enjoyed a blissful, though constantly interrupted, relationship with his family. From 1812 until death from cancer on 7th December 1817, he perhaps had time to share with his children the companionship he had been unable to find on all his voyages to exotic and uncharted lands.