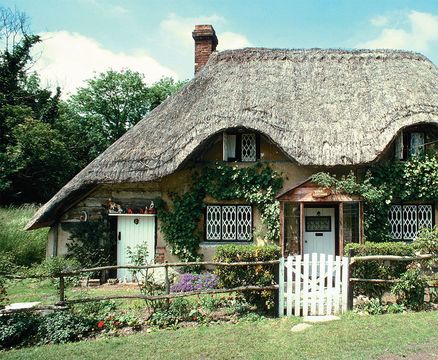 When the Bronze Age inhabitants of England wanted to put roofs on their houses, they gathered up the materials at hand—long-stemmed plants such as wheat or straw. They’d bundle the plants together and pile them atop one another to create a thick roof that sloughed off rain and kept the house cool in the summer and warm in the winter.

Most thatched-roof houses in the British Isles are remnants of an earlier time, dating to the 19th century or even as far back as the 16th. But as 21st-century buyers build second homes in the countryside, they often choose to have the older, rustic look thatching gives. Modern homes and even garden gazebos are being thatched, and the style is becoming increasingly popular in North America.

The craftsmen who make and maintain these roofs are called master thatchers. Their work looks deceptively simple. While one would think that it requires nothing more than piling up bundles of plants, in fact the variations of roof styles, their curves, windows and ridgelines demand a skill that takes a five-year apprenticeship to gain qualification. 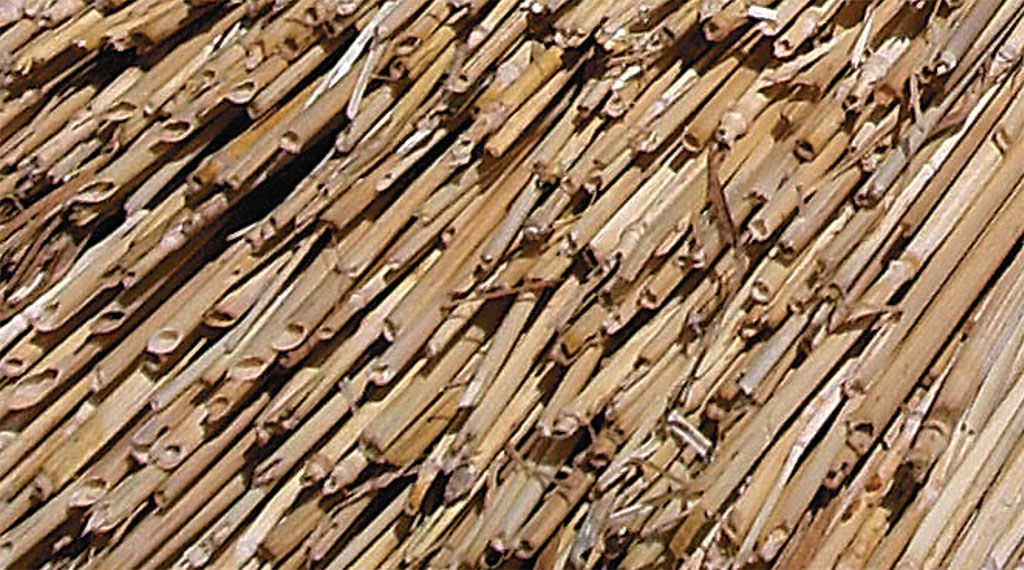 It’s also expensive and time-consuming, and that has changed who owns England’s most traditional houses. “Thatch used to be a poor man’s roof, now it’s a rich man’s roof,” says Bev Fowler, master thatcher and co-owner of B&S Fowler Master Thatchers, Ltd., in Oxon, Oxfordshire. “Our clients used to be old ladies who had lived in the houses all their lives. Now it’s young people with money.”

But while rethatching a roof runs into the thousands of pounds and has to be done every 20 to 25 years, homeowners are rewarded with an attractive roof that is remarkably resistant to the elements. The plants’ natural water resistance makes rain simply run off the roof. A wire mesh is placed over the whole roof to keep out birds and vermin.

Rain is good for the straw, Fowler explains because it replaces the plant’s natural moisture. “In summer if it’s hot we actually water it down,” he says. “It’s like hair; if it’s wet it’s easy to put in place but if it’s dry you can’t do anything with it.”

Fire, the greatest concern of anyone thinking of buying a thatched home, is actually no more frequent with thatched roofs than normal ones. Once started, however, a burning thatched roof is much more difficult to put out. The main causes of fire are faulty wiring or badly constructed, or old, chimneys that release sparks that land on the roof. Chimneys should be properly built and maintained, and any wiring should be done by a licensed contractor. 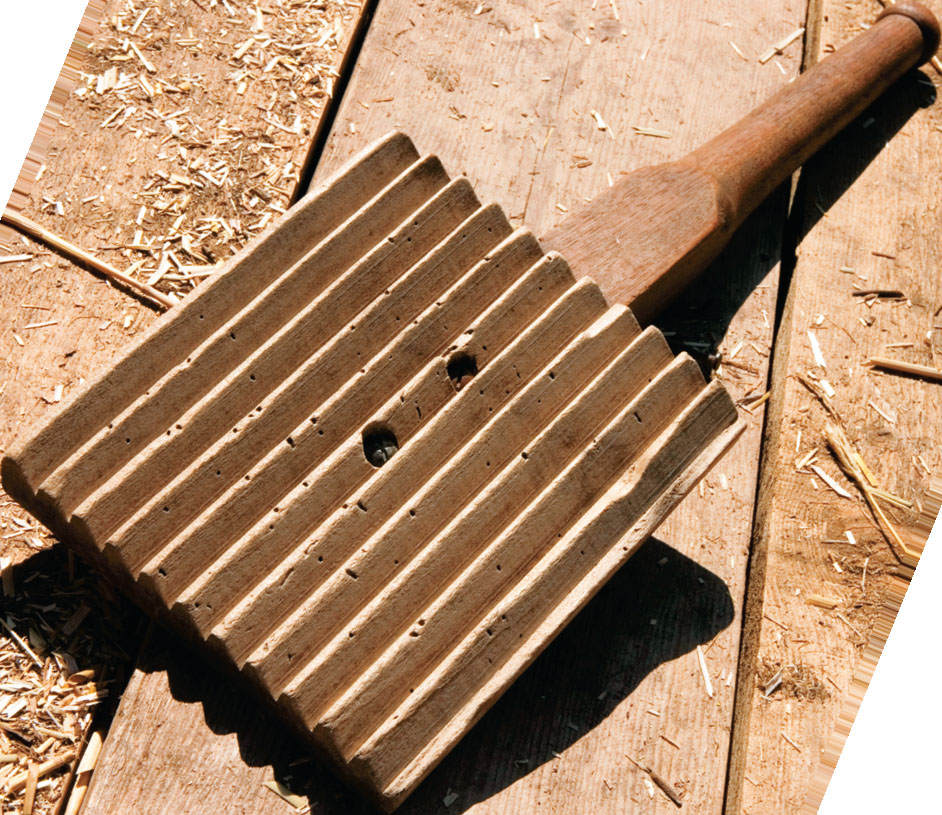 A thatcher’s drift is just one tool of the thatching craft essentially unchanged for 500 years. JOHN ECCLES/ALAMY

Because of England’s prevailing dampness, moss will regularly grow on thatch, but it is not usually harmful. Mold can be a problem, and often needs to be stripped off, taking some of the thatch and the roof’s lifespan with it. Strangely enough, modern Europe’s cleaner air may be responsible for a recent rise in mold on thatch. With the reduction of sulfites as coal plants close or burn more cleanly, mold can once again thrive.

The most important part of the roof, and one of the trickiest to do right, is the ridge at the top. While on the main part of the roof the bundles of thatch are laid all in the same direction in orderly rows, here they are placed in opposite directions and folded over the ridgeline of the roof.

“It takes all the brunt of the weather,” Fowler says, explaining that because of this, the ridge needs to be replaced every 10 years.

On one of the first fine days of spring, Fowler is rethatching one-half of a 16th-century home in rural Oxfordshire. Because of uneven weathering, the owner didn’t need to rethatch the other half of the roof, but nonetheless, the process will take weeks. For the large surface of the roof, the work is slow and repetitive. Fowler takes a small bundle of straw, taps it down so that butts are even, lays it down, and gets all straw running in the same direction so it is all smooth and level. Then he takes a stick of split hazel sharpened at both ends, twists it to make a pair of tongs, and pushes it in around the bundle. This simple device, called a spar, fastens the bundle to the surface, the hazel’s natural springiness holding it in. The new thatch is 10 to 14 inches thick, and the spars work remarkably well.

“It goes down as tight as if you’re putting a nail in a piece of wood,” Fowler says.

The work takes place in near silence. Unlike the usual hassles of having contractors work on a home, with whining drills, slamming hammers, and clomping boots, residents can relax inside and almost forget the thatchers are there.

As Fowler works, he can see the handiwork of earlier generations of thatchers. He had to strip off some of the earlier thatch, and now four layers are visible, each 30 years older than the one above it. The oldest one visible was probably laid down in the 1880s when Queen Victoria and Britannia ruled the waves.

From inside the house’s attic, and even earlier layer is visible, perhaps as old as the house itself. Only if a roof is seriously damaged does all the thatch need to be pulled away, so the straw visible through the latticework of the attic roof may very well date to the time of Shakespeare?

The tools Fowler uses would be instantly recognizable to the thatchers who originally covered the house. He uses a mallet, shears and a leggett—a rectangular, ridged plate on the end of a handle used to tap the ends of bundles flush. The leggett is now steel instead of wood, but the shape is the same.

They’ll get a lot of wear. The half roof Fowler is working on will take about 480 bundles of straw, weighing approximately three tons, and it is not cheap. One bundle costs £7, while the spars cost 15 pence each. Thus the cost of the materials alone comes out to nearly £3,500. 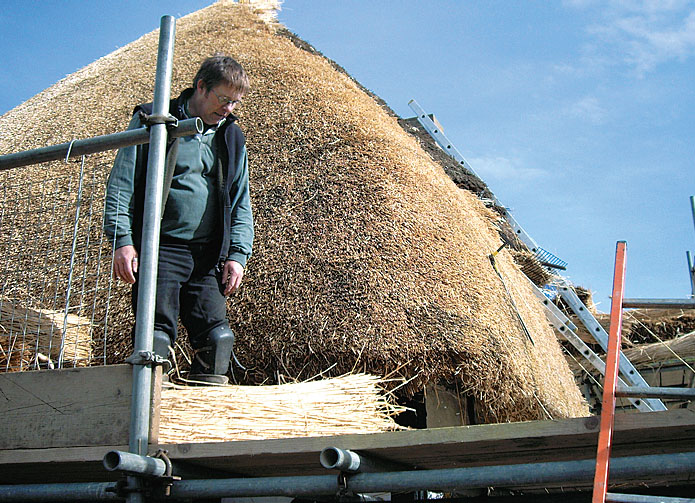 Because of the expense, Fowler and his brother Steve, also a master thatcher, own 28 acres that they plant with triticale wheat, providing enough straw for eight months of work. The straw has to be harvested with an antique harvester to preserve the stems because modern harvesters destroy them.

Triticale is an older variety of wheat, harder and organically grown. Modern wheat, altered with pesticides and genetic modification, is too weak to make an effective roofing material.
“In chemical straw you put it down and it looks great for two or three years, but by 10 years it looks different. It rots away,” Fowler says.

While Fowler favors triticale, he doesn’t always have a choice in his materials. In England, 95 percent of all thatched houses are Listed, meaning they have been dubbed historic structures and their character has to be preserved. Early thatchers used whatever materials were at hand.

If wheat wasn’t plentiful in their area, they used water reed or long straw. If there is a cluster of Listed buildings in an area, as in the village where Fowler is working, even new buildings have to keep in character with the older ones.

Water reed is very hard, and Fowler compares it to working with bamboo. It’s one-third more expensive but lasts 50 to 70 years. It is most common in the eastern part of the country, especially East Anglia, but the shortage of usable wetlands in England means that much of it is now imported. Long straw, another common material, leaves an untidy finish and doesn’t stay as compact, meaning more visits from the thatcher to redo the roof. 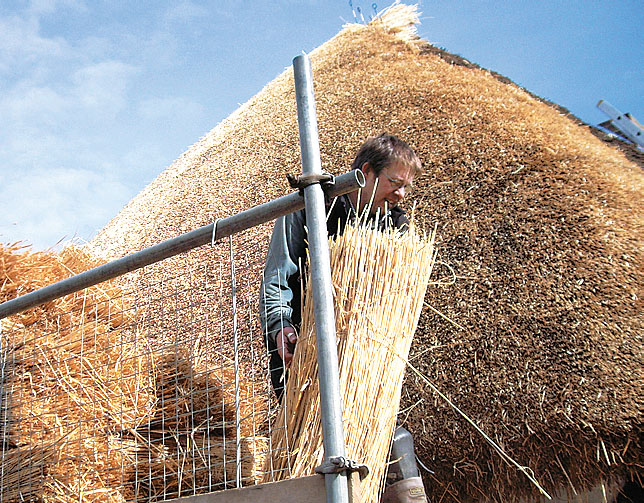 Just as the tools thatchers use have stayed the same down the generations, the process by which someone becomes a thatcher is much the same as it has always been. Fowler, 43, has been doing this all his working life. As a teen, he lived next to an old master thatcher and earned extra money on his summer holidays doing simple work for him, slowly building up his skills.

“Then the government used to fund apprenticeships,” Fowler remembers, “Now the master thatcher has to pay.”

His boss used to get £1,200 a year from the government as support for continuing the trade, but Fowler has to train his own apprentice out of his own pocket. Since it takes five years to train an apprentice, this is a major investment. 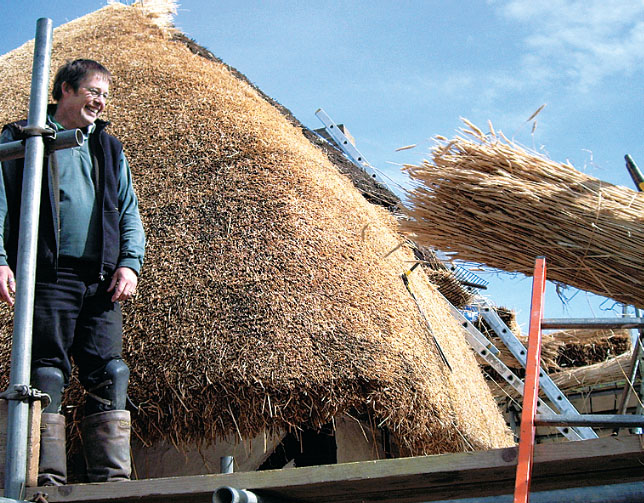 Bev Fowler has been thatching all his working life. For this job, Fowler will toss and mold 480 bundles of the triticale wheat straw he grew.

His apprentice is Luke Fowler. He is not a relation but shares a last name and a similar experience. He, too, lived near a master thatcher and started learning the trade from him. Now he’s a full-time employee of Bev and Steve’s business and is in the fourth year of his apprenticeship. When he’s not on rooftops in and around Oxfordshire, he’s up in Rushden, Northampton, at Knuston Hall, which is the country’s only school for thatching. The school consists of a big barn with various roof structures on the ground level to practice on.

Apart from an increase in imported materials to keep up with demand, and an increase in builders opting for thatch, Bardsley has seen few changes in the 32 years he has worked in the field. 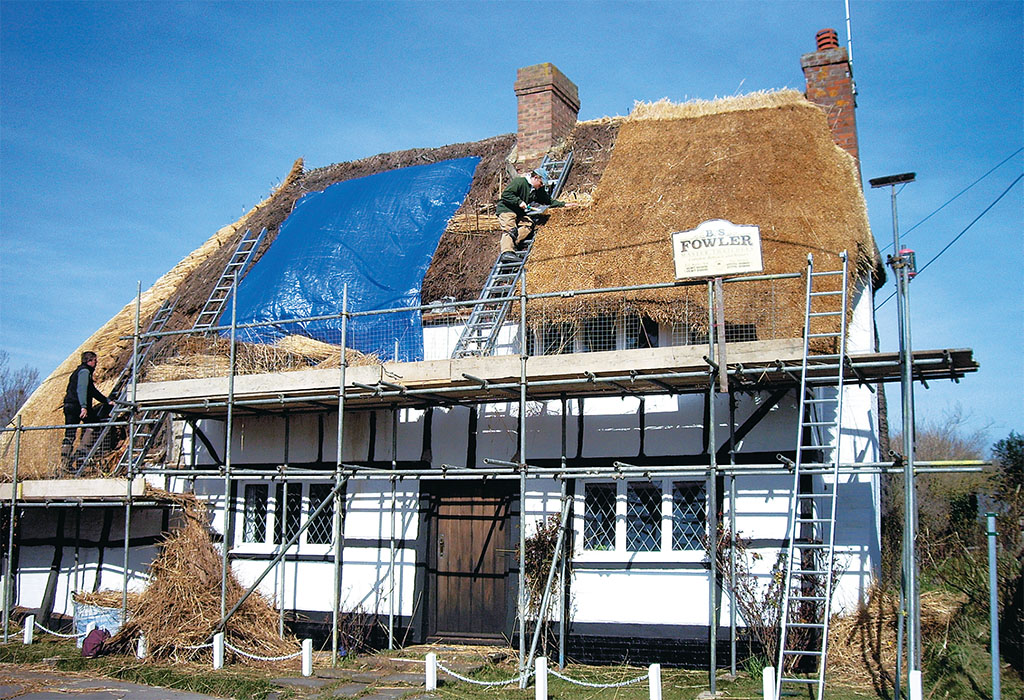 Up on the roofs of Oxfordshire, Luke Fowler has served four years of the five-year apprenticeship it takes to become a master thatcher. SEAN MCLACHLAN

“It’s a craft that hasn’t really changed much in centuries,” he says. “If you took a thatcher from 150 years ago and plopped him on a roof today with a modern thatcher, he would know what was going on.”

As a new generation of thatchers goes through its training, the total number of thatchers in the British Isles remains roughly the same, and their methods continue through the generations. It’s not hard to imagine thatchers a century or two from now keeping up the same old traditions that make British villages some of the most attractive in the world.