On This Day: William Pitt became British Prime Minister aged of 24, in 1783 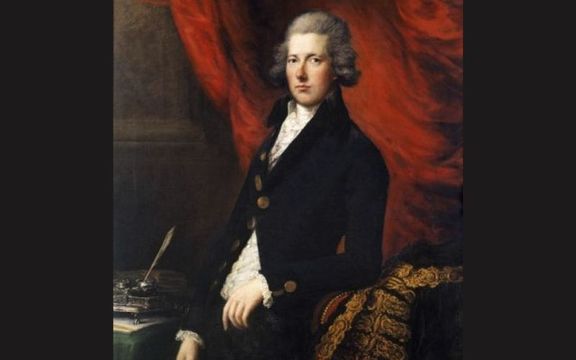 On May 28, 1759, William Pitt was born. Steve Roberts takes a look at the town of Westerham, and its most famous sons.

Sir Winston Churchill, General James Wolfe and William Pitt the Younger are as famous a triumvirate as you could conjure. Westerham is a small Kentish town centred around a main street and green (some say it is a village), yet this modestly-sized settlement was home to all three. Churchill and Wolfe have imposing statues on the green whilst Pitt’s country retreat is on the way out of town.

What links these men is their leadership qualities. Pitt and Churchill were both wartime prime ministers. Pitt during the French Revolutionary and Napoleonic Wars, when he was lauded as the “saviour of Europe”, after the naval victory at Trafalgar in 1805. Whilst Churchill pugnaciously rallied this country and its allies from May 1940 until the end of WW2. James Wolfe was cut of rather different cloth, a major-general during the Seven Years’ War, who commanded 9,000 men in the seizure of Quebec, from the French, when Pitt’s father was PM.

What our three men had in common was their ability to lead. What made them natural leaders is hard to discern, but they led, and where they led others were happy to follow.

Westerham is a place where rich history collides with the modern world. Traffic can be a British malaise and Westerham certainly gets busy on summer weekends; with the winding A25 junctioning with the A233 here, although London’s orbital M25 motorway certainly alleviates matters somewhat.

The place is small though, with fewer than 5,000 souls permanently billeted here. For a town of this size it punches way above its weight as far as its history is concerned.

There’s plenty of old buildings, as you’d expect from a place that certainly dates back to the 9th century and is mentioned in Domesday Book. There’s a couple of coaching inns, recalling the prevalent mode of transport before the railways (Westerham later had a branch railway for 80 years, until 1961. The redundant station house is now a hairdressers).

The birthplace of Wolfe

Westerham is perhaps most famous as the birthplace of Wolfe (1727-1759), who won the decisive battle against the French at Quebec, in September 1759, which ensured British control of Canada, losing his own life in the process, in a Nelsonian manner (but pre-empting the lord admiral). His last words were reputedly: “What, do they run already? [the French] Then I die happy.”

At the head of the green is his bronze statue, where he’s captured wielding his sword as though still urging his men forward. It was erected in 1911, was designed by Derwent Wood, and sits on a pedestal of Portland stone.

Quebec House, at Westerham’s eastern entrance in Quebec Square, is the place to start to learn about Wolfe. It’s a  16th-century gabled red-brick mansion, largely rebuilt in the 17th, and is where the general grew up. It’s administered today by the National Trust as a museum and monument to his memory.

Quebec House wasn’t Quebec House, of course, when Wolfe was hanging out there; that name came honourably later. In Wolfe’s day, it was the less grandiose, less poignant “Spiers”. Anyway, the house retains much of its old charm and the feel of a family home. It’s possible to imagine a young Wolfe scampering about the pretty garden playing soldiers.

I wonder what he’d make of some of the wares that are on sale at his onetime home today: second-hand books and souvenirs; Mrs Wolfe’s raspberry jam; a kiddie’s tricorn hat. Hopefully, the jam and hat might remind him of his own years of innocence, spent right here.

Another fine house that has Wolfe associations is Squerryes Court, a late-17th-century mansion owned by the Warde family since 1731. Wolfe was a friend of the Wardes (and boyhood pal of George Warde), and it was in their garden, in 1741, that he received his officer’s commission. There’s a monument in said garden commemorating the moment.

In the park can be found the source of the River Darent, which flows through the town, and the remains of an ancient Celtic fortification (c. 3rd century BC).

Squerryes Lodge, a good 18th-century house, has bits of a 13th-century stone house in one corner.

On his last visit to Westerham (December 1758), Wolfe stayed at the timber-framed George and Dragon, which is probably of 17th-century origin but has an 18th-century front elevation. There’s a board outside commemorating Wolfe’s stay. He had, sadly, just nine more months to live.

There is actually a General Wolfe pub in Westerham’s western high street, a building dating to the 16th century, but mostly clad in 19th century white weatherboarding. It is a hostelry no more, having closed in 2017, and been converted to a private residence.

Ironically, in the year Wolfe died, another famous eminence was born, who would also have close links with Westerham. Kent-born William Pitt the Younger (1759-1806) was the youngest Prime Minister in British history when he acceded to the top job at the tender age of 24.

As PM and war leader Pitt negotiated three European alliances, or coalitions (1793, 1798 and 1805), all directed against France that emerged from the French Revolution and then the ascendancy of Napoleon. He was the PM who first introduced income tax to pay for all the fighting (in 1799 at 2s in the £). It was intended as a temporary measure, but continued until 1816, after Napoleon’s defeat and was reintroduced by Robert Peel in 1842.

Any prime minister needs a bolt-hole and Pitt had his in Westerham. Pitts

Cottage, built by the 16th century, but probably much earlier, was lived in by the PM when his own home in Keston (Bromley) was being repaired.

The grade II listed house, in Westerham’s western high street, has had numerous additions to the rear since Pitt’s day, including a modern kitchen wing, and, like Wolfe’s pub, is now a private dwelling.

There’s a blue plaque telling us that this was a “12th-century cottage used by William Pitt as a country retreat” (so according to the plaque “much earlier”).

Pitt had two stints as PM, firstly from 1783-1801, then again from 1804-1806, when his health was failing, no doubt exacerbated by Napoleon’s victories, for example, at Austerlitz, in 1805, when Pitt’s coalition partners were defeated. Pitt’s final words were reputedly: “Oh, my country! How I leave my country!”

Sir Winston Churchill (1874-1965) was another famous person of more recent vintage and the final member of our triumvirate. Closely connected with the town, his home of over 40 years, Chartwell, is just 2½ miles south.

Westerham’s green has a bronze statue of the great man, in typically bullish style, by Oscar Nemon. The white marble plinth was donated by Marshal Tito and the citizens of Yugoslavia.

Churchill lived at nearby Chartwell from 1922 until his death in 1965. An older house was converted for him by society architect Philip Tilden, who also did work for Mr. Selfridge, or at least produced lots of expensive plans for him. Tilden’s adopted approach at Chartwell was “stepped gables with a Tudorish effect”.

The wartime leader would have gained inspiration and fortitude from the hillside position, the gardens with stream and lake, the nearby farm, his painting, writing and bricklaying. The interior of the house is pretty much as Churchill left it with precious relics,  including original typescripts of some of those famous WW2 speeches.

Churchill, of course, of Anglo-American parentage and aristocratic antecedents, is often lauded as the “Greatest Briton” of all, a parliamentarian who twice crossed the floor of the Commons, served as a colonel during WW1 after the failure of the Dardanelles campaign, as Chancellor under Stanley Baldwin, but was then politically isolated for a decade (1929-39), his so-called “Wilderness Years”.

With the rise of Nazism in Germany during the ’30s, Churchill would consistently and loudly urge the prevention of German expansion. Chartwell served as a base where he developed, with the help of physicist F.A. Lindemann (1886-1951) the future Viscount Cherwell, a sophisticated intelligence centre. Churchill was back when war was declared, firstly at the Admiralty, and then as PM in May 1940. The rest, as they say, is history.

When Churchill delivered his “Finest Hour” speech in the Commons the following month (18 June 1940), he spoke of moving forward “into broad, sunlit uplands”. Perhaps he had Chartwell and its hillside in his mind’s eye? It was something worth fighting for. And Churchill’s last words? “I’m bored with it all.”

Chartwell opened to the public as another National Trust property in 1966.

There really is no shortage of interesting buildings to explore in the town.

The parish church, St Mary’s, dates from the 13th to 15th centuries, was much restored by the Victorians and has a rare medieval spiral staircase leading up to the squat tower, and an equally rare painting on wood of the arms of Edward VI, who, after all, was only on the throne for half-a-dozen years or so.

The splendid stained-glass includes a memorial window, by Edward Burne-Jones, to Wolfe, who was baptized in the church. Two of Churchill’s grandchildren were also baptized in the font, which is from the 14th century.

Other interesting buildings include the “Pheasantry” (on the green) and Grosvenor House, both fine 18th-century edifices. There really is more history here than you can shake the average stick at.