Whatever Happened to the Staffordshire Hoard? 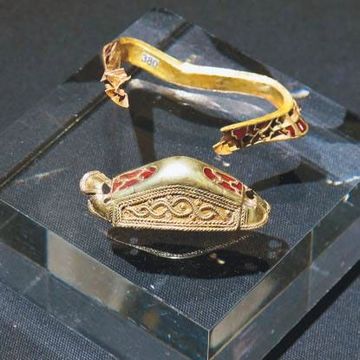 The thrill of the chase on the Mercian Trail

After a superbly successful national appeal, the Staffordshire Hoard, valued at well in excess of £3 million, was purchased for the public benefit and is now jointly owned by Stoke-on-Trent City Council and Birmingham City Council.

The remarkable treasure trove totals some 4,000 objects and fragments: just about 13 pounds of gold, nearly 4 pounds of silver and around 4,000 cloisonné garnets. Unique in content and quantity, the treasure has mesmerized scholars and visitors from around the world—including our esteemed editor (British Heritage, March 2010).

Comprising “war gear” like helmet cheek plates, pommel caps and hilt plates ripped off swords and knives, plus sundry Christian artifacts, the trove includes animal designs in the most exquisite filigree. Perhaps it should be no surprise that such militaria was buried in the heart of what was the aggressive, expansionist Anglo-Saxon kingdom of Mercia—centred on the modern Midland—that reached its height in the 8th century under King Offa.
But then the “who, what, why, when” questions kick in. Commentators at the time of the discovery declared the Hoard “will change the history of the Dark Ages,” that teasingly opaque period between the 5th-century withdrawal of the Romans and the 11th-century Norman Conquest. Over the last five years, painstaking work of cleaning and analyzing the treasure has been underway, not hidden behind closed doors in the usual manner of such finds, but in tandem with keeping the Hoard on display, sharing insights with an enthusiastic public each step of the way.

I caught up on some of the latest news at four venues on a newly coined “Mercian Trail.” Each showcases a portion of the Staffordshire artifacts and highlights different aspects of the treasure’s emerging story in the context of Anglo-Saxon history in the region. 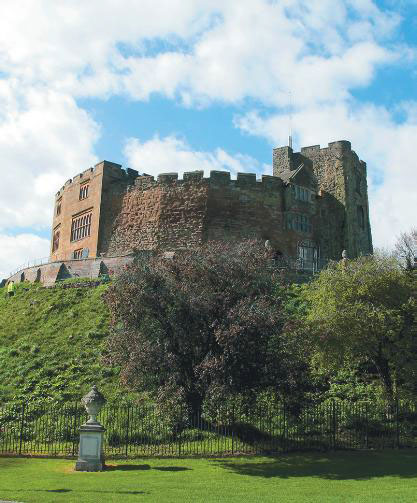 Beginning at Birmingham Museum and Art Gallery, I met with Dr. David Symons, curator of Archaeology and Numismatics, to get an overview of investigations so far. The laboratories at Birmingham won the Archaeological Institute of America Conservation and Heritage Management Award for the Staffordshire Hoard conservation program and in spring hosted a “grouping” exercise, a sort of dazzling “jigsaw challenge” bringing together all the cleaned artifacts for the first time. New types of sword fittings were revealed and groups of pieces matched to show what the original hilts looked like. Mystery cloisonné fittings were teamed into suites that decorated the same original objects. There is at least one helmet, composed of more than 1,500 pieces—only five other such Saxon helmets of the time are known.
“The Hoard makes the Anglo-Saxon poem Beowulf very real,” Symons says. Though once thought to be an artistic exaggeration, the epic’s swaggering picture of warrior stripping warrior of weaponry is genuinely mirrored by the archaeology.
The extraordinary range and quality of iconography and craftsmanship also shows for the first time the true extent of the gold-wealth and aspirations of the ruling warrior class, otherwise only glimpsed in exceptional finds like Suffolk’s 7th-century Sutton Hoo ship burial (possibly of Raedwald, King of the East Angles).
“Certainly whoever owned the Hoard was very high status—there’s three times as much gold as at Sutton Hoo—and it came from elite warriors,” Symons says. 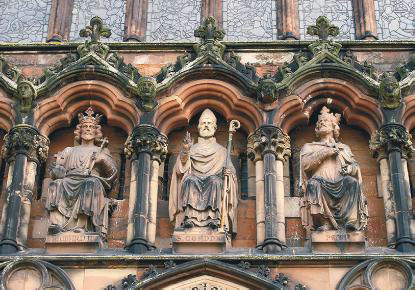 Current thinking, from comparing objects and other sites, is that the Hoard was buried around ad 650–670, a time when ambitious Mercian rulers like Penda and Wulfhere were fighting intermittent wars with Northumbria and East Anglia. Experts have identified metalwork typical of East Anglia and Kent, some resembling Cumbrian or Northumbrian types—and some that don’t fit any known patterns.

As to why the huge treasure was buried at the time, theories range from it being a religious offering or trophy collection to a “bank” of valuables to be dipped into as required. What seems clear is that the treasure was amassed selectively over some time rather than stripped from the dead on one single battlefield: While there are pieces from as many as 150 sword hilts, there is nothing in the way of belt fittings, just three tiny belt buckles, for example. The oldest artifacts date from the second half of the 6th century, possibly passed from father to son, and the fact that pieces were torn off without care could suggest they were to be recycled, the gold melted down. 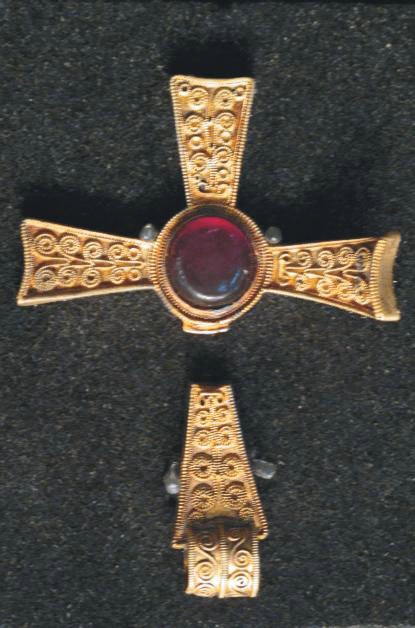 Keep up to date with Staffordshire Hoard news and find travel directions to the four venues on the Mercian Trail at www.staffordshirehoard.org.uk.

Symons suspects the booty was buried for safekeeping, somewhere relatively out of the way but easy to find again—it was on a ridge overlooking Watling Street Roman road (still used at the time)—but that for some reason the owner was unable to return. We may never know.
Materials and craftsmanship have also been closely analyzed. Alongside displays of objects, the museum has a “touch table” where you can enlarge images of items to appreciate the breathtakingly minute details of zoomorphic interlaces, carefully cut garnets backed by gold foil to make them glitter, intricate waffle patterns—and tiny mistakes that add a reassuringly human touch.

“The jewelry skills show that the term ‘Dark Ages’ is a complete misnomer,” Symons says, and the museum’s new exhibition this autumn will reveal further insights into Anglo-Saxon jewelry, as well as the little-known trading routes that brought gold and garnets to our shores.

With brain fizzing, I made the half-hour drive north to Tamworth Castle, the second stop on my Mercian Trail. “Tomtun” (settlement by the Tame) was the capital of Mercia with a royal palace, although today’s castle, on the southwest corner of the Saxon “burh,” dates from the Norman era. Here, you can dig deeper into the story of warfare in Anglo-Saxon times.
Previous major local finds include quern stones from a Saxon mill and the additional showcasing of Hoard artifacts “enhances Tamworth’s identity as an important Anglo-Saxon town,” says Tom Hobbs, Heritage Access Officer. “The king and his men would have had such treasures; the rule was by the sword.”
Displays unfold the story of kingship, tribute, and Mercian power; of elite troops, battle tactics and weaponry; and how, back at the mead hall, lords rewarded their crack warriors with swords and bejeweled fittings plundered from the battlefield. An “exploded” sword hilt shows how displayed original pieces from the Hoard fitted together. 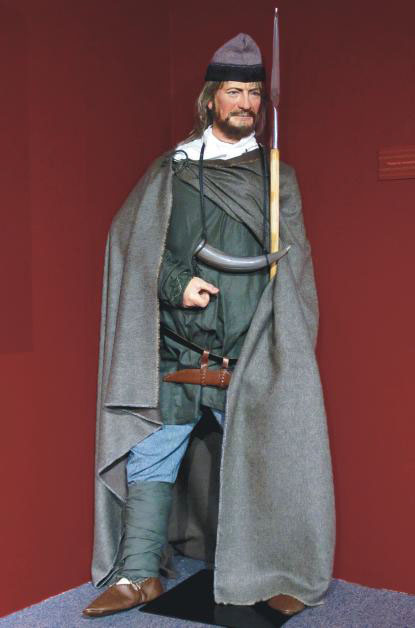 Greatly enlightened but resisting a costume-box invitation to “dress like an Anglo-Saxon,” I made the dozen minutes’ drive to overnight in Lichfield. At the mid-way point of my two-day visit, I stayed in a lovely B&B, 17th-century St. Johns House, just a short step from the cathedral.

The most controversial finds in the Hoard have been the few mangled remains of Christian artifacts: Were they folded for burial or desecrated by pagans? Why were they stashed with battle gear anyway? Dr. Anthony Moore, Canon Chancellor of Lichfield Cathedral, showed me around the Hoard exhibition in the Chapter House and highlighted how the treasure enriches the cathedral’s story and its own Anglo-Saxon relics.

The Christian Church was weak in Mercia when Chad came as bishop to Lichfield in 669, and though he lived only to 672 the missionary saint brought many to the Faith. An 8th-century carved angel, believed to have originally decorated his shrine, is on show in the Chapter House, alongside the St. Chad Gospels of 730—still in use to this day.

It’s quite spine-tingling to think that around the very time St. Chad was working and living here, and the roots of the cathedral were growing, the Hoard was being buried just a few miles to the south—including a broken pectoral cross of the type worn by a bishop like Chad. There’s also a large gold cross that has been folded and a gold strip inscribed in Latin with one of the most military texts in the Bible: “Rise up, O Lord, and may Thy enemies be dispersed and those who hate Thee be driven from Thy face” (Numbers 10:35).

Christian warriors could have taken such items onto the battlefield as comforting symbols: Did a pagan king like Penda capture them, or was the damage done in battles between Christians? Would Chad have known the owner of the pectoral cross—there was a limited cast of potential wearers at the time. It may be the Staffordshire Hoard offers a last glimpse of Mercia before its Christianization, while the Lichfield Angel and St. Chad Gospels take forward the story of its evangelization—one compelling conjecture.

At The Potteries Museum and Art Gallery in Stoke-on-Trent, a re-created Anglo-Saxon mead hall (that social hub of camaraderie, feasting and storytelling), seemed an apt spot for reflection on how far the Mercian Trail has come.

Museum exhibitions on everyday Saxon life and death featuring regional finds from pottery to ordinary grave goods accentuate the extraordinary nature of the Hoard, more of which lay before me posing puzzles: pommel caps, their tops worn away—by warriors nonchalantly leaning on them or by nervously fidgeting pre-battle fingers? Decorations that shape-shift from horse to warrior to boar tusks, depending on how you view them—the Anglo-Saxons loved their riddles and symbols (boars, for example, stood for protection).

And do those beautiful garnet inlaid gold strips come from book cover mounts or saddle fittings?

There are many years more of investigations into the Hoard to come, with books and further online resources promised, and throughout you can share the thrill of the chase on the Mercian Trail.