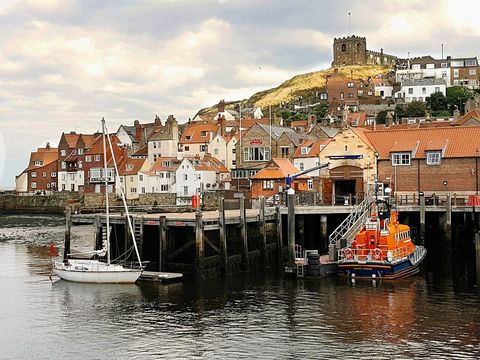 Get off the main roads and discover some wonderful British sits that most holidaymakers won't make it to! Here's an insider's guide to getting off the tourist trail in Britain.

Salisbury, Bath, and Stratford-upon-Avon are definitively on the beaten track. That well-worn trail also leads to York and Edinburgh, Canterbury and Winchester, the Cotswolds, and the Lake District. The motorways, principal A-roads and the train routes across the island take us to the A-list sites of Great Britain’s history and beauty. Far from those highways are the byways, where we go “off the beaten track.”

It is a phrase much celebrated in tourist literature and travel talk about our sceptered isle generally intended to praise places and site visits that most tourists don’t see or even know about. Somehow this is supposed to be privileged insider information. It is an expression that has always made me grimace.

After all, sometimes places touted as “off the beaten track” are there for a reason. There is either not much that really adds to your travel experience or what is there doesn’t merit the time and effort invested to get the spot. Other times the touted off-track attraction is within a stone’s throw of the motorway and crowded with coachloads of visitors, hardly in the proverbial boondocks.

For those who care to seek them, though, there are indeed some destinations far from the motorways that few visitors know about and fewer would think to put on a travel itinerary.

Over the years, I have discovered or pursued some wonderful places where a day or two exploring and visiting reveals a deeper sense of place and character than can be found in a dash from castle to cathedral to famous garden.

It is in destinations such as these, away from the thoroughfares, where the serendipity of unexpected adventure lies waiting. Indeed, you can set off from the motorways on a secondary A-road almost anywhere in Britain, and sooner or later you will certainly find it.

Here are just a few places I have returned to more than once, where the ambiance and setting create a sum greater than the parts that might attract you onto the road less traveled.

Whitby, North Yorkshire – Back to the Moors and the North Sea

Though it is good road into town on the A171, the ancient port of Whitby, on the North Sea, is certainly out-of-the-way with the A1(M) 50 miles to its west. Its working harbor, and the narrow, cobbled streets on both sides of the swing bridge across the narrow mouth of the River Esk are lined with chandlers’ shops, jewelers selling finely crafted Whitby jet, old world pubs, fish-and-chip shops and finer dining establishments.

Perched dominantly on the cliffs above the town of 13,000, the towering remains of 7th-century Whitby Abbey belie its pivotal role in history. Here at the Synod of Whitby, in 667, the decision was reached to adopt the practices of the Roman instead of Celtic Church and the dating of Easter was agreed. In the care of English Heritage, a pavilion of displays and artifacts tells the abbey’s history.

Whitby is also the hometown of Captain James Cook, arguably Britain’s most important naval explorer of all time. The 17th-century house on Grape Lane, where Cook lived while he served his apprenticeship, is now the Captain Cook Memorial Museum dedicated to his life and work.

Catch a different perspective on Whitby’s isolation. From the train station by the harbour, take the Esk Valley Railway on a scenic train journey across the North York Moors National Park. Or sail on a day cruise from the harbour, perhaps whale watching, along the Yorkshire coast.

Follow the River Tweed Valley west along the Scottish border country into the land of the Border Abbeys and Sir Walter Scott. Take the A698 from the A1 at Berwick-on-Tweed and cross the Scottish border and river at Coldstream on route to the market town of Kelso, and the first of four abbeys in the neighbourhood built by King David I in the 12th century. Floors Castle, the largest inhabited castle in Scotland and home of the Duke of Roxburghe, is nearby.

Onwards a few miles, I love Melrose as a base for exploration. The pretty village has a number of fine small inns and hotels within walking distance of Melrose Abbey, the best preserved of the abbeys and considered among the most beautiful in Britain. The heart of King Robert the Bruce is buried in the grassy grounds.

Just a couple of miles from town, do visit the baronial estate of Abbotsford, home of Sir Walter Scott, famed historical novelist and Scottish hero. The house is just as he created it with dramatic displays of arms and equally impressive gardens.

Beneath the Eildon Hills, Dryburgh Abbey is a romantic ruin indeed, nestled on a bend in the River Tweed. Sir Walter Scott is buried in the north transept of the church.

To complete a tour of the abbeys, follow the A68 south about eight miles to Jedburgh, where Jedburgh Abbey sits prominently over the town, another remarkable remnant of medieval architecture.

Porthmadog, Gwynedd – Where the Welsh Mountains Meet the Irish Sea

I remember walking into a Porthmadog pub and hearing nothing but Welsh being spoken. On the Irish Sea coast of northwest Wales, the harbour town of Porthmadog was once a thriving port - shipping highest quality Welsh slate around the world.

Maritime history meets the mountain ranges of Snowdonia National Park here in a pretty town replete with craft shops and restaurants. From the A55 that crosses the North Wales coast, take the A487 south to Porthmadog. You might stop along the way to visit formidable Caernarfon Castle, where Charles was crowned Prince of Wales.

The Ffestiniog Railway, built in 1836 to carry slate to the port, now takes principally visitors on a 15-mile climb through woodlands and waterfalls to the gray mountain town of Blaenau Ffestiniog, surrounded by mountains of slag. Time your return train to visit the Llechwedd Slate Caverns to learn the story of famed Welsh slate.

On a peninsula overlooking Cardigan Bay, do take in Portmeirion, the famed fantasy Italianate village built over decades by eccentric architect Sir Clough Williams-Ellis. Colourful Italian buildings climb up lush hillsides around a piazza of formal gardens and abundant flowers in the subtropical microclimate.  Just down the coast you might visit Harlech Castle, another of King Edward I’s dramatic fortifications, or drive across the Snowdonian mountains to Betws-y-Coed and the Vale of Conwy.

Among the least known parts of England to American visitors is the north coast of the West Country, where Somerset meets Devon, a high plateau spreads south from the sea.

This is Exmoor – miles of treeless moors, where wild ponies graze, crisscrossed with river valleys and green, leafy glades. The branches of the River Lyn merge to rush off the Exmoor plateau through a narrow gorge into the Channel at the harbour village of Lynmouth.

Take the A39 west some 45 miles from the M5 at Bridgewater to Lynmouth. The picturesque village is built along both sides of the river gorge and along the harbor front. Views along the North Devon coast are spectacular and the people are decidedly friendly. Small hotels, inns, and eateries abound. Visit the Lynmouth National Park Centre, Glen Lyn Gorge and the poignant museum of the great flood that destroyed the village in 1952. The one must-have experience is a ride on the Cliff Railway, carrying passengers up the cliff face from Lynmouth to the larger town of Lynton above.

This is “Lorna Doone Country,” setting of R.D. Blackmore’s epic romance Lorna Doone. Retrace the historical novel’s 17th-century scenes in a few miles’ circuit to the hamlet of Oare and its ancient church, through Malmsmead to the Doone Valley and back to Lynton through Watersmeet and along the river. Armed with even a little knowledge of the story, it is an unforgettable and gorgeous drive.

Cockermouth, Cumbria – Lakes and Peaks without the Crowds

While visitors throng to the undeniably beautiful meres and fells of the Lake District National Park, the crowds and traffic are concentrated in the southeastern corridor from Ulverston along Windermere to Keswick. Few folks venture up to Cockermouth, the Lake District’s northernmost market town. This is a great place to feel the character of Lake District life – without the crowds or touristy feel.

The most direct route to Cockermouth is from the M6 at Penrith, straight west for 30 miles on the A66. As you drive through the heart of northern Lakeland you might stop to see the dramatic ancient henge of Castlerigg Stone Circle. Then, the road runs along the shore of Bassenthwaite Lake to Cockermouth where the River Cocker joins the River Derwent.

With a population of c. 8,000, Cockermouth’s market charter dates from the early 1200s. Its broad main street displays architecture from almost every era. There are plenteous accommodation and dining options but for character and location I favor The Trout Hotel riverside on Crown Street.

Visit the Wordsworth House, the large Georgian home where poet William Wordsworth was born, now in the care of the National Trust. Another Cumbrian institution is Jennings Brewery, which regularly offers 90-minute tours complete with a sampling of its traditional ales.

If time permits, Cockermouth makes a great base for a day’s exploration down the A595 to Whitehaven and the quiet western side of the lakes.

Off the beaten track for special interests

Hay-on-Wye, Herefordshire: Bibliophiles of all descriptions make their way to this small town in Wales’ Wye Valley, second-hand book capital of the world.

Beaulieu, Hampshire: The National Motor Museum in this New Forest village is a mecca for fans of motoring and automotive history (Palace House and Beaulieu Abbey are a bonus.)

Castleton, Derbyshire: A centre for outdoor pursuits in the High Peaks, this pretty, busy village also features Peveril Castle on the hilltop above and the Peak Cavern below.

Harwich, Essex: Among its other gems of maritime history, this small Essex port was where the Mayflower was built and home to its Master, Christopher Jones.