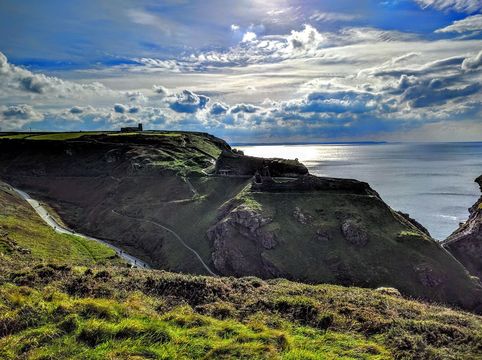 Tintagel Castle perched precariously in the mists of history on the Cornish clifftop.NeedPix / Public Domain

Are you planning a visit to the UK and wondering what to do in Devon and Cornwall? Here's a perfect route to take to pass a few days and explore all the area has to offer.

Tales of smugglers and abandoned tin mines, wind-swept heaths and great country houses, fishing villages and ancient harbors: here is a breathtaking panorama of England’s far West Country. A landscape and a culture all its own define the beautiful counties of Cornwall and Devonshire.

You can drive down to the West Country; the most common routes are the A303 or the motorways, the M4 to the M5. A faster and more pleasant solution is the train, from Paddington to England’s West Country. Pick up a hire car in Exeter for an afternoon drive across the neck of Devon on the A377 to the old harbor town of Barnstaple on the Bristol Channel. High hedgerows, grain fields and breaks of forest characterize the very English rural countryside. There is plenty of time for photo stops, and time to explore the port of Barnstaple before dinner this evening.

Meandering Down the North Coast

Travel south along the rugged North coast of Devon and Cornwall. The direct route is the A39, but there are plenty of opportunities to jump onto smaller coastal roads. A spiral-bound British motoring atlas sometimes termed “ordnance survey map,” is indispensable for driving around anywhere on the island. The classic stop this morning is the flower-decked seaside village of Clovelly, just to look around. Another highlight is Tintagel Castle perched precariously in the mists of history on the Cornish clifftop. A mid-afternoon arrival in the artists’ colony of St. Ives gives plenty of time to sort out accommodations and explore this picturesque harbor town and its award-winning galleries. In the height of summer, St. Ives is a place to plan lodgings in advance, and any time of year parking is a healthy walk from the seafront. 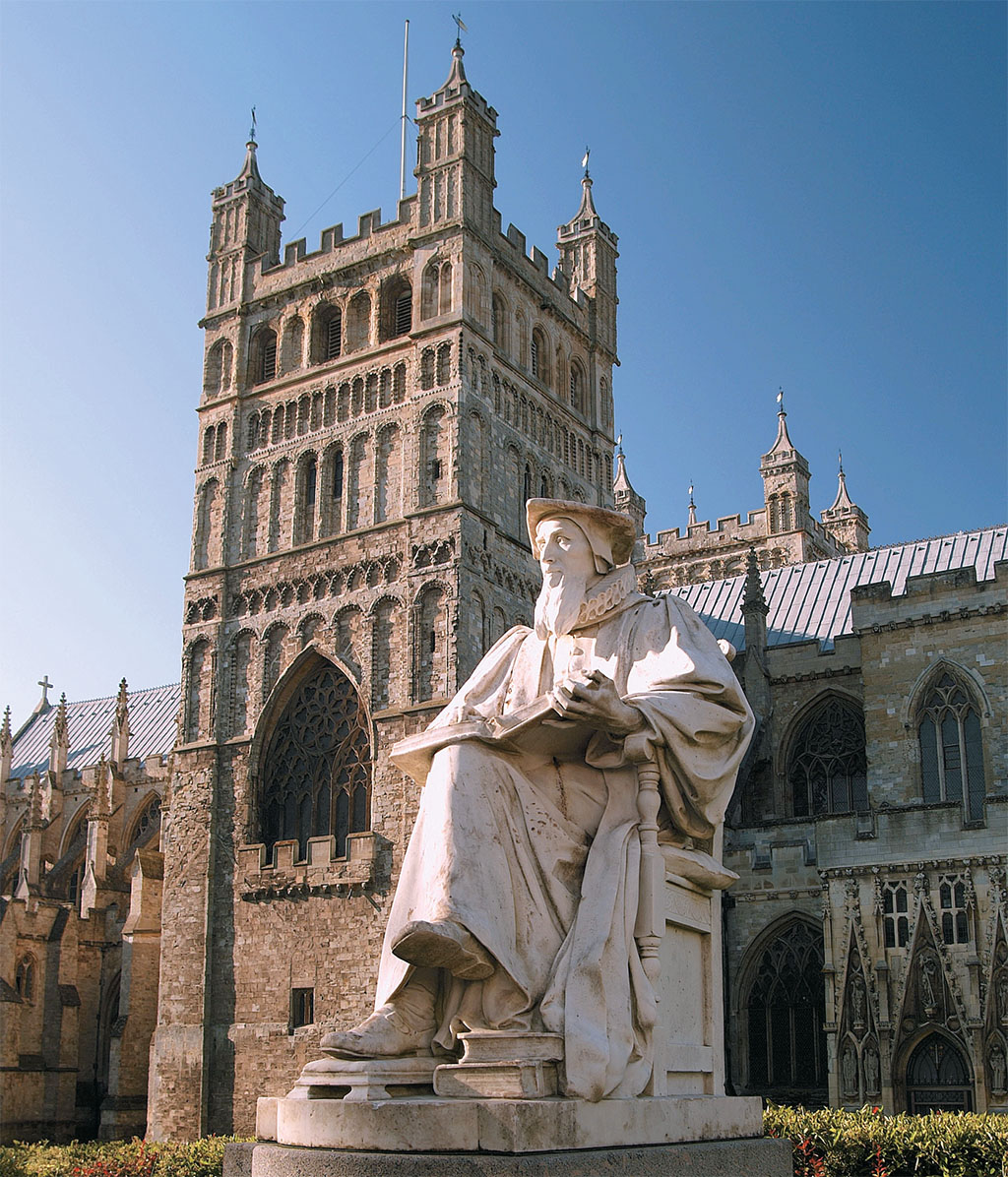 The statue of Richard Hooker stands guard over the close of lovely Exeter Cathedral, founded in 1050

The next panorama of Penwith echoes Jim Hargan’s recent story The Cliffs of Penwith. It’s a short drive to Land’s End, then past the henge of Merry Maidens to Mousehole, Newlyn and Mount’s Bay. You may dawdle, or arrive in Penzance for lunch, with time to explore the historic harbor town. Do pay a visit to St. Michael’s Mount, the stately home and fortress island. It’s a short return a dozen miles across the isthmus to St. Ives with an evening for mingling among the chic cafes and pubs of the town.

Treasures along the Cornish spine

Take the A390 to Truro, Cornwall’s county town and cathedral city; it’s worth seeing. At St. Austell, you might visit the world-shaking biospheres of the Eden Project. Just up the road near Bodmin is a National Trust jewel - the magnificent, high Victorian country house, Lanhydrock. A drive up the A30 across Bodmin Moor takes you to the wasteland of smugglers and wreckers, and Jamaica Inn. Daphne du Maurier’s famous setting is impossibly touristy but fun. You can either route to stay in one of the small towns on Dartmoor’s western edge, like Tiverton or Yelverton, or continue on to bustling Plymouth. 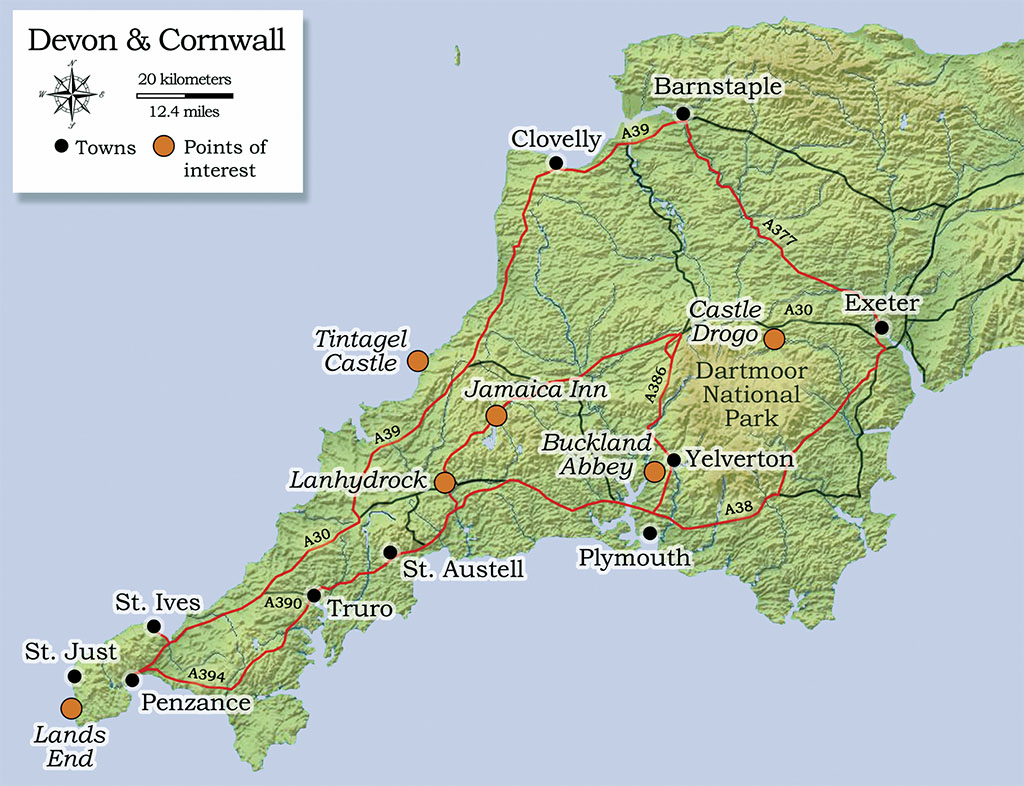 If you would rather not make the drive, travel by Britrail Pass can yield a luscious travel adventure in the West Country. Rail travel doesn’t serve the north coast of the Devon-Cornish peninsula, but the southern train route largely along the south coast is a great scenic ride in its own right.

Take the train from Paddington all the way to the end of the line in Penzance (allow five hours or more). Use the piratical harbor town as a base to explore Penwith by local busses, or just hang around the old seaside for a day or more and take a local fishing boat over to Saint Michael’s Mount.

On the return, you might hop off in Truro to visit the county town and Truro Cathedral or continue straight on for a stay in Plymouth. The station is convenient and there’s more than a day of exploring to do in the Barbican, Plymouth’s colorful waterfront district.

The route to the beaches of Torquay, where the train station is just across from the water and next door to the Grand Hotel. Yes, take a day or two in the heart of the English Riviera and perhaps pay a visit to Agatha Christie’s Greenway House. It’s a short train chug up the coast through the seaside holiday towns of Teignmouth and Dawlish to Exeter, where the old Roman city is a treasure to discover before heading back to London.

Spend the morning in the harbor city of Plymouth, the Mayflower Steps and Plymouth Hoe. Much of the modern city was rebuilt after World War II, but the seafront remains its old self. There is time to explore the Barbican, do a bit of shopping and have lunch in a seafood cafe. This afternoon, Buckland Abbey, the 13th-century monastery turned manor house of Sir Francis Drake, makes a great visit. The elegant NT house and gardens of Cotohele are nearby as well.

Across the wilds of Dartmoor

This morning set out across the wilds of Dartmoor, past wild ponies and over desolate moors. The B3212 leads over the heart of the moor through Princetown and past the Postbridge clapper bridge. Or route down to the village of Widdecombe-in-the-Moor. Pay a visit to eccentric Castle Drogo, the strange fantasy castle built by Sir Edward Lutyens. Turn in the rental car at Exeter. There are plenty of hotel and guest lodgings in the old medieval city. You might start by visiting majestic Exeter Cathedral or sitting in for choral evensong.

If you must, you can catch a morning train from Exeter St. David’s station for the swift ride across the southern countryside to London. Exeter deserves a day to explore, however. The Romans called the city Isca Dumnonorium; since then the historic city has been the gateway to the West and a commercial hub by land and sea. Visit the museums and attractions of old Exeter Quayside and Exeter Guildhall, the oldest municipal building in the country. The city center is compact, pedestrian-friendly and easy to navigate. You can always return to London tomorrow.