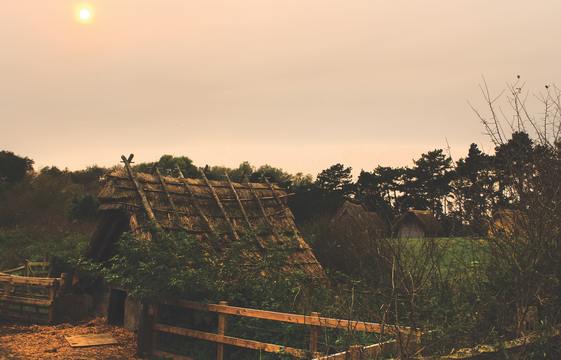 DAY 1 - THE ROAD TO NORTH DEVON


PULLING OUT of Heathrow, I joined morning traffic on the M25 for a few miles to the M3 and then headed south to Basingstoke. Thence, I swung off the motorway and headed west on the A303 across Hampshire and Wiltshire to the West Country. In Somerset, I veered north to the county town of Taunton and carried on to the Bristol Channel coast at Minehead. Yes, most of the way it was gray and drizzly. Sigh.
From Minehead, the A39 leads west along the coast into Devon and across the top of Exmoor National Park. At Porlock the road climbs at a 25 percent gradient with hairpin turns to the plateau. This is gorgeous scenic country with bleak moors and deep forested valleys to the south and the cliff-pocked coastline and views north across the channel to Wales. My destination was the harbor village of Lynmouth at the base of a river gorge—one of my favorite places in Britain. With a few stops for coffee, pictures and a wander around Taunton, I'd been on the road about seven hours when I checked into the Bath Hotel on the harbor front.


BETWEEN MINEHEAD to the east and Barnstaple to the west, a span of some 40 miles, the north coast of Somerset and Devon is popularly known as Lorna Doone Country, setting of the 18th-century historical epic novel (alas, now little read) by R.D. Blackmore. I was there to tell the story, which will appear in our March/April issue. Roughly midway along that span of coast, at the base of the river gorge, the village of Lynmouth is connected to the slightly larger town of Lynton on the clifftop by a Victorian water-powered funicular “railway.” It yields incredible views over the rocky Channel coast. In the evenings I escaped from the damp chill, took my steak-and-ale pie and pint and visited with locals just down the single narrow street at The Village Inn in front of a warming log fire 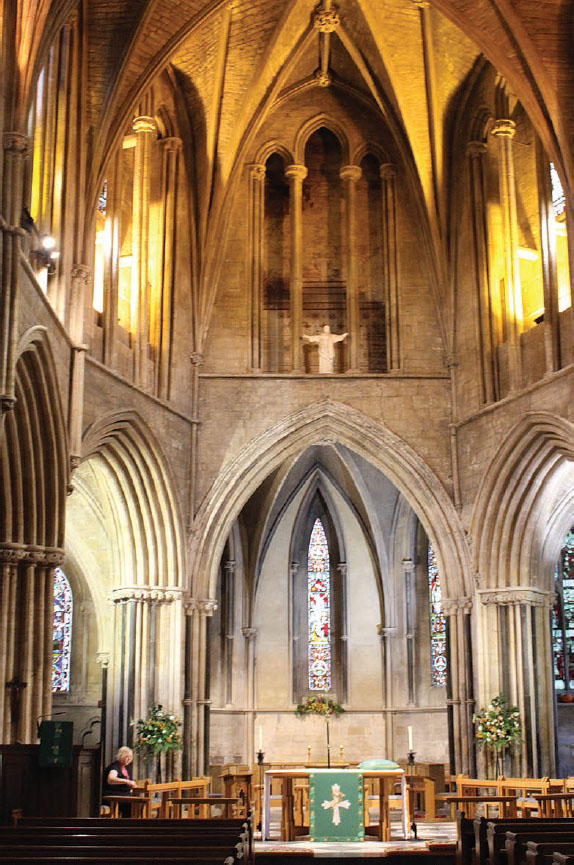 
DAY 4 - NORTH TO THE SEVERN VALLEY


MY NEXT planned destination was the south coast of Devon—the sandy beaches at the English Riviera of Torbay. With the weather socked in gray and rainy, though, that seemed really pointless. I went east on the A39, paid a visit to Coleridge's cottage in Nether Stowey, then turned north at Bridgewater and along on the A38 through Bristol into the Severn Valley. Along the way I detoured just a bit to Berkeley, home of Berkeley Castle, still in the same family after 800 years, and Dr. Edward Jenner's House, where the rightly acclaimed country doctor discovered the world-changing vaccine for smallpox. It was late afternoon when I arrived to decamp for the evening in the historic market town of Tewkesbury.


I HAD SEEN an item in the paper that announced Royal Leamington Spa as home to the happiest people in the country. Thinking I would ind out for myself, I turned east toward Warwickshire. With a stop to visit historic Pershore Abbey, I made the lovely Regency spa town of 50,000 by lunch. The showery weather pattern continueth.
I have passed through Leamington on several occasions, but never stopped to explore. Beautiful architecture, lovely wide shopping streets, a plethora of interesting eating places and some gorgeous civic gardens enfolding the River Leam characterize the affluent community. There isn't much left of the baths and elegance of the Victorian boom town, though, and while the people actually look happy, the reason I'd never been there is that there really isn&aps;t much for visitors to see. I turned next door to Warwick. At the TIC there, they opined that Leamington Spa was happiest because they lived next to Warwick. 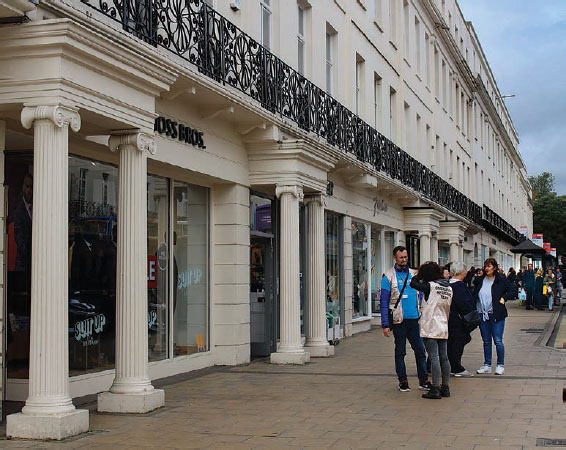 The people of affluent Leamington Spa may be happiest not attracting throngs of visitors.[/caption]


EAST ANGLIA was on my itinerary, with stories to pursue. As you'll read a few pages on, I was on the trail of Oliver Cromwell, history's face of the Parliamentary triumph in the English Civil War. The obvious visits were Cromwell's hometown of Huntingdon and his family's later home in nearby Ely. I encamped at the Lamb Inn, virtually adjacent to magnificent Ely Cathedral in the small city (circa 15,000) about 15 miles north of Cambridge. In the middle of the surrounding marshy fens, Ely is “Eel Island.”


THE UNIVERSITY town of Cambridge is a fascinating, iconic and beautiful place. In term time, alas, it is also teeming with people, the bustling academic community of the city supplemented by hoards of visitors, including many coach loads of international tourists following the umbrellas of their leaders. Still, the melee cannot obscure the beauty and the history of the 13th-century gathering place of scholars. Yes, it was still raining. 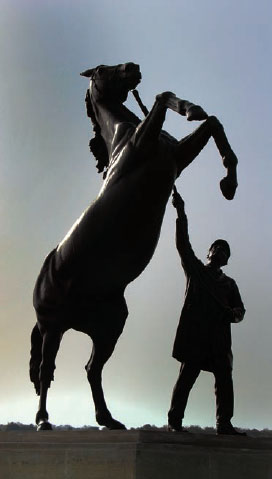 This sculpture of “The Newmarket Stallion” marks the entrance to the National Stud.[/caption]

THE DAY I had picked up from shunning Torbay gave me opportunity to visit and revisit some lovely bits of the area. By now, not surprisingly, I'd developed a full-blown head cold from a week's pushing it under those soggy English skies. I visited the National Stud in Newmarket, home of English horseracing (where 2,500 thoroughbreds train and take their morning gallops on the lush, gently rolling fields). Then, Bury St. Edmunds with its motto “Shrine of the King; Cradle of the Law.” St. Edmund the martyred Saxon King lends his name to St. Edmundsbury Cathedral. And it was here in 1215 that the English barons made their compact to force the tyrannical King John to grant the Magna Carta. Finally, I had long wanted to see the Anglo-Saxon Village at West Stowe. The ongoing experimental archaeological site reconstructs the most complete 6th-century village ever uncovered in England. Their discoveries have been history-changing. 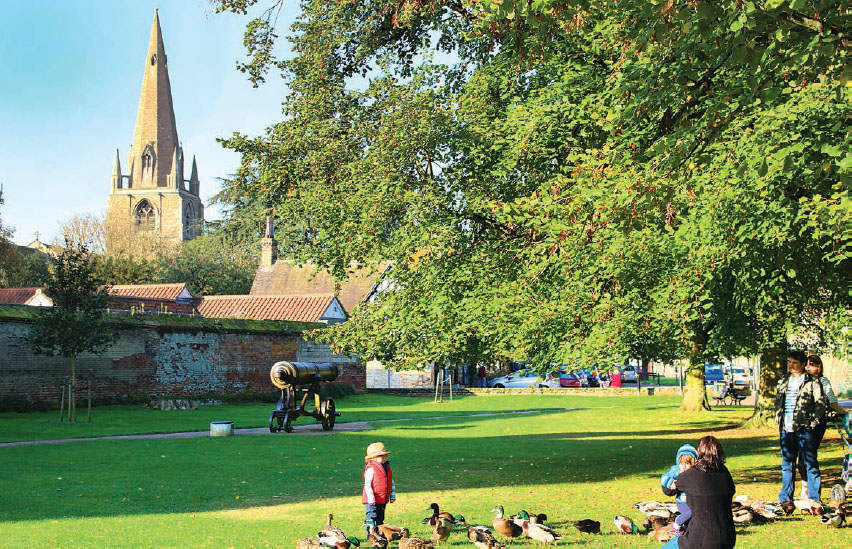 Both ducks and townsfolk look across the green in front of Ely Cathedral to St. Mary's Church and Oliver Cromwell's House.[/caption]


DAYS ON - THE LONG ROAD HOME


SORRY I WAS to say good-bye to the hospitable confines of the Lamb Inn and Ely, but all good things finally lead on a homeward route. I drove southwest toward the Thames Valley with a stop in Bedford to visit the John Bunyan Museum and the Bunyan Meeting—the Puritan church founded in 1650 and still an active faith community in the heart of Bedford. A couple of days later, the flight back to Boston beckoned. It was still drizzling and I was still coughing. What fun it always is!