Visiting Windsor - more to this town than a castle! 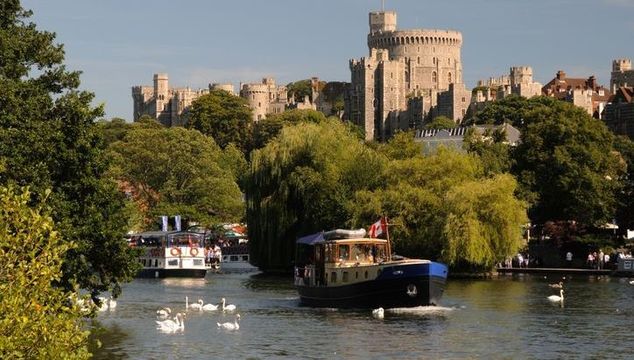 Windsor Castle with Thames in foreground.Getty

Visiting Windsor is a must when one makes a trip to London. Castles, parks, and history are all guaranteed when visiting Windsor and will ensure you have a blast.

Nestled along the banks of the Thames, Windsor is a historic area located just south of the river. While of course Windsor is best known for its incredible castle that serves as a home for the Royal Family, there is so much more to the area than that.

Imposingly situated on a promontory above the River Thames, Windsor Castle dominates the town and the surrounding neighborhood that bears its name—both physically and spiritually.

Many a bustling market town across Britain grew up and became prosperous in the shadow of a great castle built by Norman or Plantagenet monarchs and their minions. In most places, understandably enough, the town’s fortunes ebbed with the inevitable decline of the castle’s importance. But Windsor never lost its influence as a center of regal power and prestige, and the town never fell out of fashion.

This is an affluent, even posh, place of about 27,000 residents, who take their royal neighbor for granted.

Most visitors hustle in and out to visit the famous royal residence of the House of Windsor, but the town, park and surrounding royal neighborhood deserve a longer visit and a look around beyond the famous castle walls. 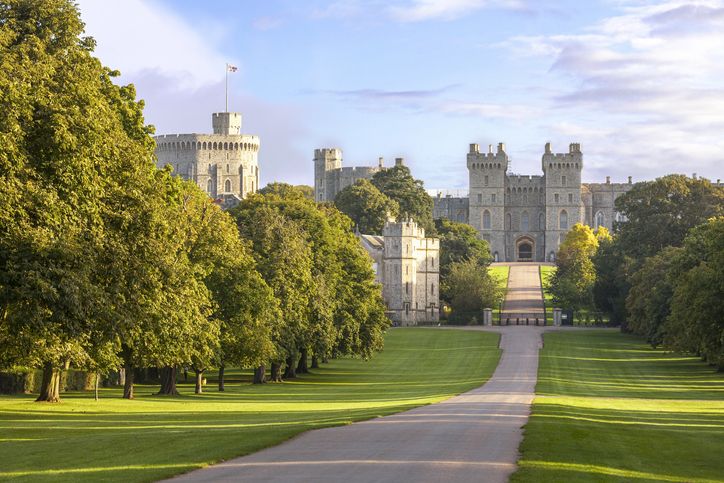 How to get to Windsor?

As a day trip from London, Royal Windsor is a short train ride from Waterloo Station to Windsor Riverside. Or travel from Paddington and change trains at Slough for Windsor Central. Trains run throughout the day. The Tourist Information Centre is in the old ticket office.

Windsor also makes an easy stopover either coming or going from nearby London Heathrow. Take junction six on the M4, then just follow the signs or head for the big castle you see from the road. In fact, Windsor Castle lies on the flight path into Heathrow and planes are overhead and heard all day.

It prompts the famous wag’s question: Why would they build a royal castle in the flight path of a major airport?

Read more: Where do the Royal Family really live?

Where to stay in Windsor?

Yes, this is one place to make arrangements in advance if you intend an overnight stay. There are a number of hotels in Windsor, like the toney Sir Christopher Wren Hotel by the river, the Harte & Garter across from the castle, the quieter Royal Adelaide and more.

Check out www.windsor.gov.uk for the usual tourist information.

Windsor Castle. It’s one of the most popular visitor sites in Britain for a reason. Royal history has played out in the largest inhabited castle in the world (1,000 rooms and counting) for 1,000 years.

William the Conqueror had the place built back in the 11th century to guard the River Thames approach to London from the west. Two score monarchs have made Windsor Castle a principal residence—just away from the clamor and miasma of London’s courts and its Parliament.
Join visitors from around the world at Windsor Castle, but it will take several hours to see it all. Queen Mary’s Dollhouse is a popular attraction on the North Terrace.

Access the State Apartments from the North Terrace as well. Not only do these majestic ceremonial rooms contain many of Her Majesty’s great artworks, but there also are enough impressive edged weapons on display alone to arm formidably a full brigade.

In the lower ward, St. George’s Chapel has been a royal peculiar for centuries, burial place of kings and home to the Order of the Garter. It’s also one of the finest examples of Gothic architecture in Britain. 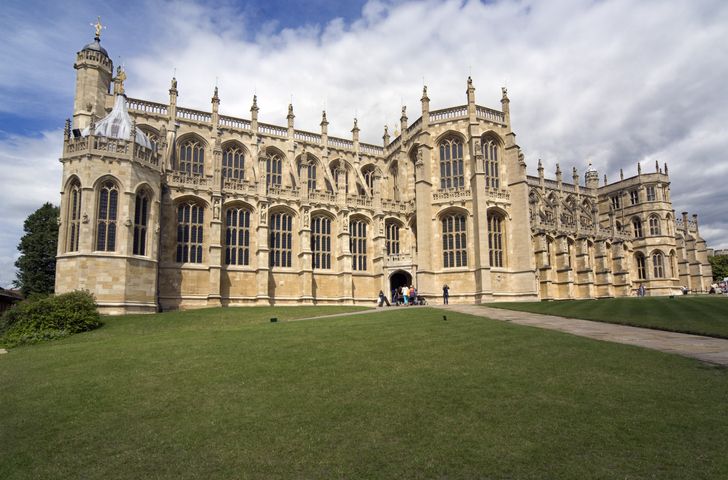 Take lunch or a bit of shopping

Lunching or dining in Windsor is easy. The High Street is lined with eating and drinking options aimed at Windsor’s crowds of visitors. The old train station, just across the street from the castle, spreads a concourse of eateries across the Victorian platform.

I like the tapas options at La Tasca. Café Nero and Costa offer reliable coffee shop choices.
The upscale King Edward Court Shopping Centre (the place to park) spreads out on several levels from the station.

Peascod Street, said to be the oldest street in Windsor, is the pedestrianized shopping street that runs south from the High Street. It’s an amazingly clear line of demarcation, but few visitors stray many yards down Peascod. This is where you’ll find the Boots and the cafes and pubs where the locals have lunch.

Down by the riverside

At the river below the castle, a bridge (long a footbridge) leads across the river to Eton. A few minutes’ walk up Eton’s colorful High Street will bring you into the campus of Eton College.

A nominal charge at the gate of the original quadrangle opens magnificent Eton College Chapel and the fascinating small museum chronicling the history of England’s most famous private school.

Another delightful option is a boat ride on the Thames. Quayside, you can take a comfortable excursion boat for either a 40-minute or two-hour cruise along the river with the Queen’s swans. 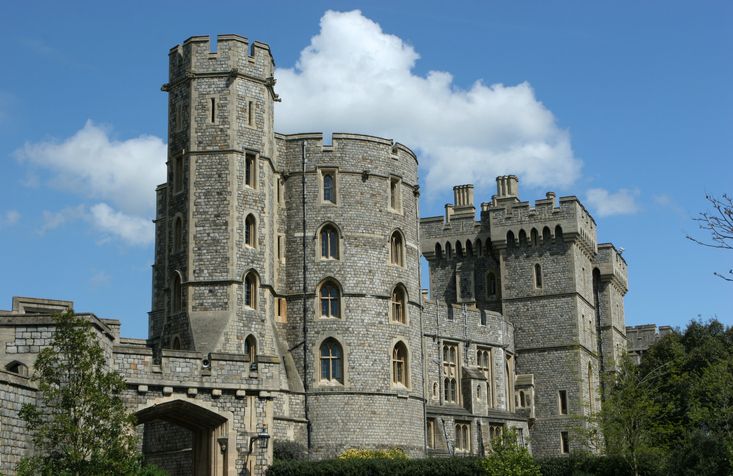 Windsor castle one of the homes of the British monarch

A stroll in the park?

Radiating south of Windsor lies several thousand acres of Windsor Great Park. Much of it is open to the public. Wander down the Long Walk from the castle foreground a part of its three miles, or drive toward Ascot on the A332 and pull off into one of many parking areas.

You’ll pass grace-and-favor cottages and the gates to the park village housing Crown Estate employees. Beyond the park itself, the Crown Estate spreads for 30,000 acres and houses such sites as Saville Garden and Guards Polo Field (where Prince Charles and his sons play), with the famous Ascot racecourse adjacent.

The Great Park is a popular picnic destination and the site of such events as the famed Windsor Horse Show.

Just down the road

Follow the river east just a couple of miles to Old Windsor. The road opens out into a broad, open riverside field. This is Runnymede, where the Magna Carta was signed in 1215. There are a parking lot and National Trust tearoom at the Windsor end of the field. A path across the meadow leads to two memorials not visible from the road.

The first is a rotunda commemorating the signing of Magna Carta. It was raised by the American Bar Association in 1957. The second is an acre of ground and a corresponding monument ceded to the American people in memorial to President John F. Kennedy.
On the ridge above Runnymede, the Air Forces Memorial overlooks the meadow, the picturesque Thames and the flight approach to Heathrow.

This isn’t in any of the guidebooks and few overseas visitors follow the signposted side road to the site. Set in immaculate lawns, the alcoves of this dramatic colonnade contain the names of 20,000 men of the RAF and Air Forces from throughout the Commonwealth who died in World War II and have no known grave. It’s a poignant visit. 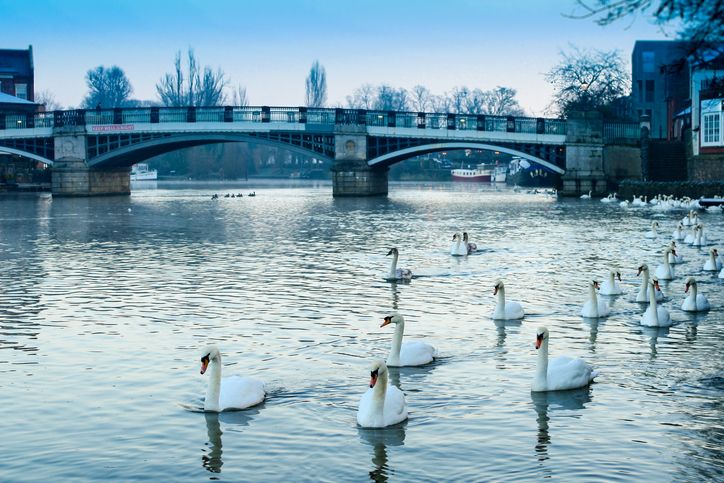 Windsor’s restaurants and pubs bustle at night with an eclectic, cosmopolitan crowd of locals and international visitors. For something extra, there is always something headed to or from the West End playing at Windsor’s Theatre Royal, a bijou theater with a consistently great playbill.

Most visitors never give it a thought. From the castle’s North Terrace, you look out on sports fields across the river.

These are Eton’s. It was about these fields that Wellington famously remarked: “The Battle of Waterloo was won on the playing fields of Eton.”
If you’re in town at 11 a.m., traffic will stop on the High Street for the parade of Guards, complete with band and spit-and-polish, returning from their stand of duty in the castle to Victoria Barracks.