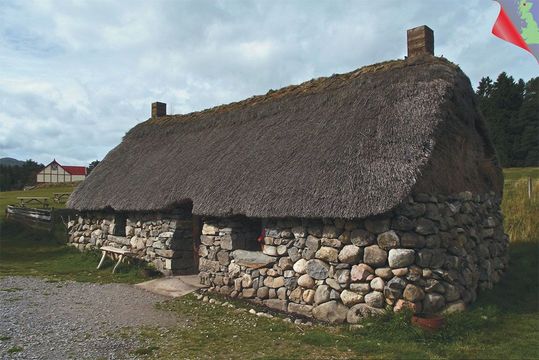 Walk back in time to glimpse ways of Highland life long ago—a hard struggle against nature and landscape that went largely unchanged for centuries at Newtonmore’s Highlands Folk Museum.

Newtonmore’s Highlands Folk Museum is a time capsule of now-forgotten aspects of Scottish life. Situated on an 80-acre site, the living history museum showcases Highland life from 1700 through the mid-20th century.

The museum’s extensive collections of buildings, tools and equipment would have been part of our Highland ancestors’ everyday lives. Everything you see of home, agriculture, education and work is either an original building or piece of equipment, or an accurate replica from the period depicted.

Much of old rural Scotland is on display here, including a working farm, complete with period implements, just as it would have looked in the 1930s, and an open air museum of buildings relocated here. The farmhouse incorporates a post office and shop from the same period, with loose candy sold in small paper bags just as it was generations ago. There is a farm workers’ cottage, a shepherd’s hut and a smoke house to cure salmon and other fish.

Nearby are a red post box and telephone kiosk and a railroad halt. A display of dry stane dykes—low walls of stone built without any mortar or cement—shows the different techniques used across the Highlands depending on the stone available.

The trades of the time are not forgotten either, with a loom shed and loom, of the type still used today in Harris Tweed manufacture, a tailor’s shop, a clockmaker’s and carpenter’s workshops.

Leisure exhibits include a hut used by curlers holding a bonspiel (a curling match) and a pavilion originally used by shinty players in the district. Akin to field hockey, shinty is certainly not a game for the faint-hearted. 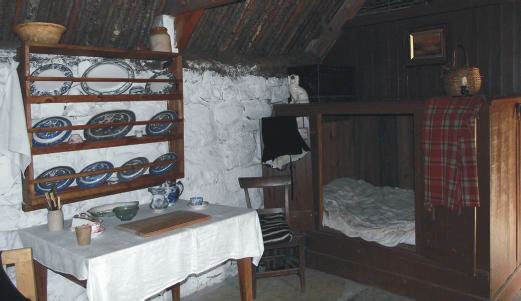 For Scots of a certain age, one of the most fascinating exhibits is Knockbain School. The single-room classroom holds 40 desks and period school equipment, while the rather stern-faced schoolmaster (the dominie in Scots) wields a strap or tawse—a leather belt applied to the hands as a punishment for indiscipline. Having been on the receiving end of this instrument of torture in my own schooldays, I can confirm it left the hands stinging, particularly on a cold winter day. Thankfully, the tawse was consigned to history in the early 1980s.

Elsewhere is a reconstructed traditional blackhouse of the type found on the Isle of Lewis. Our ancestors adapted the natural materials at their disposal to combat the often severe weather. Faced with the gales that sweep in from the Atlantic Ocean, they built low-walled, thatch-covered dwellings, weighted down with stone. The thick walls effectively consisted of two separate walls, like dry stane dykes, with an infill of earth or smaller stones in the middle to help keep out the wind and rain.

Inside, the houses were divided into three sections. In the center was the living and sleeping area, around a peat fire in the middle of the room. There were no chimneys and the smoke tended to fill the interior before eventually filtering out through the thatch. On one side of the living area was the byre, where cattle were kept during the harsh Scottish winters and the other side was often kept as a “good” room, for entertaining visitors.

Further along is a Highland cottage, an example of a later style of house, incorporating stone to fashion fireplaces and chimneys, which allowed the peat smoke to escape. 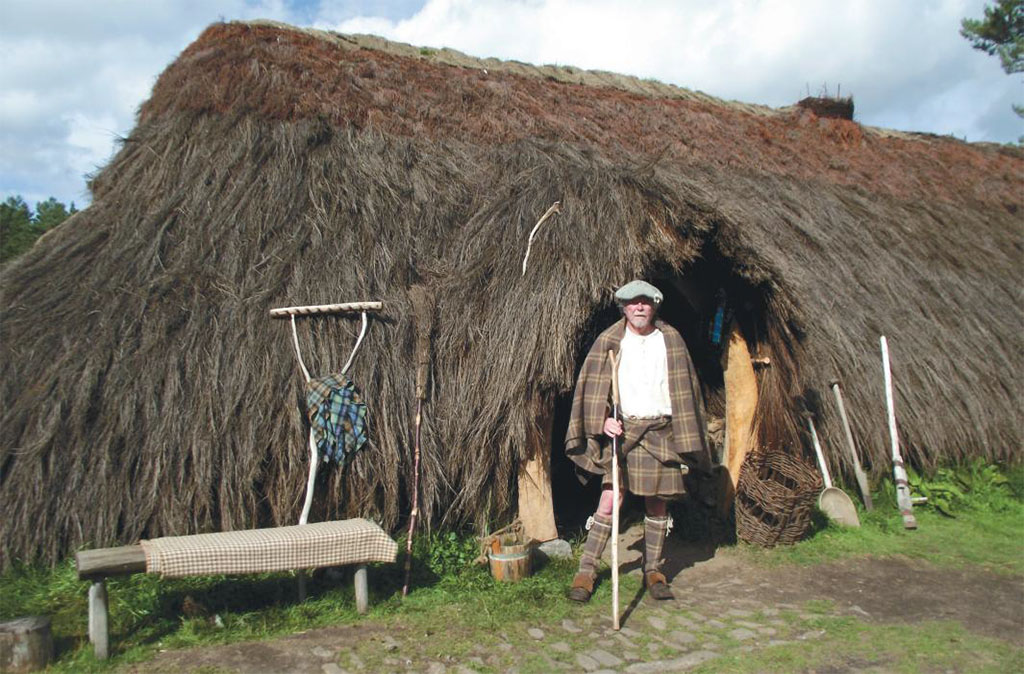 Pride of place at the Folk Museum, though, must go to the authentic re-creation of an early 18th-century village—dwellings and workplaces built of stones and turf and covered with reed, heather or broom thatch, just they would have looked three centuries ago. With the historical accuracy of the township, it has been featured as a backdrop for several television documentaries on Highland life.

To emerge from the pine forest and find a clearing with eight rough dwellings of stone, wood and thatch, and see the tacksman (the tenant) and his wife standing outside is an amazing experience. They represent a way of life that had been largely unchanged over 300 years—a hard struggle using the few available materials in a constant battle to survive in some of the toughest conditions nature can produce.

The low walls of the town buildings consist of stones and turf. Thin stakes were used to form simple roof trusses and whatever material that was available—heather, bracken or reeds—was used as thatch, which carried off surface water with amazingly efficiency. The buildings usually faced south, to make the most of the heat and light from the sun.

Get a Warm Highland Welcome

The Highland Folk Museum is open from Easter weekend until August 31. Admission is free, but donations are appreciated.

Newtonmore is on the A9, 70 miles north of Perth and 43 miles south of Inverness. From Aberdeen it is 110 miles. Follow the A96 toward Keith and then follow signs to Craigellachie. The museum is clearly signposted. Buses and trains are available from Glasgow, Edinburgh or Inverness. www.citylink.co.uk, www.nationalexpress.com, www.scotrail.co.uk

The tacksman told me he would be happy to live in his house—in the summer! His property is the largest and best one in the village, with some simple furniture, including box beds where the family slept. They reflect his status as the intermediary between the laird or clan chief who owned the land and the other tenants.

Other dwellings in the township include those of a weaver and a stockman. The stockman’s has no space inside for cattle, although it does have walled area outside, so it seems likely that he was one of the poorer members of a poor community.

This simple way of life continued in the Highlands and Islands until the Clearances, when the landlords, eager to make the most profit possible, moved many tenants off their land to make way for sheep. Some emigrated voluntarily, while others were given no real choice and forced to make a new life for themselves in the cities or overseas. Many made their way to North America where their ability to cope with difficult conditions and make the best of the natural materials available meant that they made good settlers. One nation’s loss proved to be another’s gain!