Chasing the red dragon in Wales 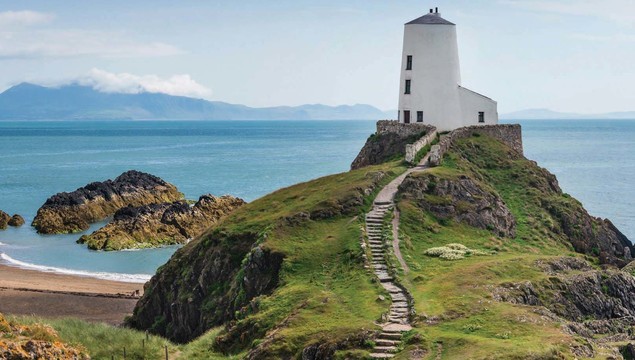 Dana Huntley explores the heritage of Wales and examines what makes the small nation a great one.

Visitors cross the River Severn from the M4 into Wales. On the west side of the river, arrivals are greeted with the sign Croeso y Cymru, which means Welcome to Wales. Throughout the country, most commercial signage and all road signs are bilingual. The Welsh language is one of six Celtic living languages still used across Europe, all with an alphabet, grammar and pronunciation uniquely its own. I have studied Welsh just enough to pronounce words and place names, explain the language’s idiosyncratic spelling and exchange greetings with folks, but it is an elegant and musical tongue.

Throughout its last millennium, the united Wales has been a principality. Today, there are some who object to the term, feeling that it diminishes Wales’ status in the United Kingdom with England, Scotland and the province of Northern Ireland. Since the days King Edward I in 1301, however, the heir to the English throne has been given the title Prince of Wales. Prince Charles was granted the title in 1958 and crowned by his mother the Queen at Caernarfon Castle on July 1, 1974.

Separated from England by the north-south border called The Marches, Wales is surrounded by coastline on three sides. In between, it is largely a country of agriculture and mountains. In the north, the mountains of Snowdonia yield the world’s highest quality slate, quarried and crafted since the time of the Romans. The mountains of the south are rich with coal seams and iron ore that was mined and sent down the valleys to the harbor cities of Cardiff and Newport.

The origins of the red dragon as a symbol of Wales are lost in the mist of history. Legend says that the dragon was on the battle standard of the historic King Arthur when he led the Britons in their campaign against the Saxon invasion in the 5th century.

In several decades of visiting in Wales, I’ve found a warm and rugged people who against heavy odds have maintained their independent identity, culture, and custom. There are dominant threads in the red dragon that flies proudly on the Welsh flag. Together they make up the unique character of Wales – along with the national sport of rugby.

My love affair with Wales began with its music. Wales is justly called the Land of Song. The Welsh can sing. They say there may be something in the Welsh language that, learned in childhood, trains or configures the voice for singing. You might ask Tom Jones, Shirley Bassey, Charlotte Church or Bryn Terfel.

One of the most renowned expressions of Welsh music is their male voice choirs. Some 25 years ago, I went to the coal valleys of the Rhondda and Pontypridd to hear and write about the unique sound of Welsh male choirs. In fact, there are 97 members in the Welsh Association of Male Choirs. That’s a lot for a country the size of Massachusetts with a population of 3 million. The Prince of Wales is the federation’s patron.

I connected with the Aber Valley Male Voice Choir from the mining village of Senghenydd. Over the years, I took many Americans to hear them sing. When I was traveling regularly to the Valleys, I would sit in with the first basses at rehearsals in the choir’s home over the Ex-Servicemen’s Club in Senghenydd. It’s a fond memory indeed.

Another famed showcase of Welsh music is its eisteddfods, festivals of music and performance arts that have their roots in the 12th century. Held at varying venues, the annual National Eisteddfod is the largest such competitive and performance gathering in Europe. It draws thousands of musicians and poets, and more than 100,000 spectators over its 8-day run. The Eisteddfod is held entirely in the Welsh language.

The Llangollen International Eisteddfod is held in the north Wales mountain town of Llangollen every July. Choirs, soloists and folk dancers from around the world audition for the coveted invitations to compete. Among the most prized choral awards in the world is the title Choir of the World at Llangollen. It was here that Luciano Pavarotti gained the recognition that propelled his fame. While I have visited Llangollen many times, the eisteddfod remains on my to-do list.

Read more: Wales in the Year of Legends

Though legends are legion that place the historic King Arthur everywhere from Cornwall to the Cairngorm Mountains, the most credible evidence identifies Arthur as a 5th-century Celtic king of Powys, encompassing much of North Wales and Shropshire. He may have inherited the red dragon from his father, known as Uther Pendragon. Arthur was a warlord rather than a traditional monarch. His acclaim rose from uniting the tribal Britons’ petty kingdoms against the invading Germanic Saxons and holding them at bay for a generation.

Arthurian sites of legend or history are spread throughout Wales. Perhaps the earliest written connection to the historical Arthur was found in the now illegible inscription on the 8th-century Pillar of Eliseg, still partially standing in Valle Crucis near Llangollen. High above that market town, the ruins of Castle Dinas Bran are said to have been home to the Fisher King, keeper of the Holy Grail.

To the south, legend has the circular Roman amphitheater at Caerleon as the site of Camelot. More than likely, it was a meeting place of the knights of King Arthur – the legendary round table. After all, by the late 400s, the Romans weren’t using it anymore. From Dinas Emrys in the mountains of Snowdonia to Carmarthenshire on the south coast, legends of Merlin, the Holy Grail, Excalibur, and battles and sundry exploits by Arthur and his knights abound.

Christianity came early to the Britons in Wales. The patron saint of Wales, St. David (Dewi Sant in Welsh) was but one of many 5th and 6th-century monastic missionary evangelists who spread the gospel and the Celtic church in Wales and beyond. St. David was formally canonized in 1123. His shrine was built where he was buried at his monastery. The 12th-century St. David’s Cathedral remains a place of pilgrimage in the southwest corner of Wales. St. Davids, Pembrokeshire, is the smallest city in Britain, with a population of less than 2,000. Its cathedral is one of six medieval Anglican cathedrals in Wales. But that is the English Church.

Overwhelmingly, the Welsh are chapel folk. Bishop William Morgan translated the Bible into Welsh in 1588 and Wales went her own Protestant way through the 17th century with Independent (Congregationalist), Baptist and Presbyterian chapels spreading across the country. In the mid-1700s, the Methodist movement swept through much of Wales and left its chapels, as well.

The dissenting meeting houses were known as chapels to distinguish themselves from the Church of England. Chapels are named after Biblical places, attributes and virtues, such as Salem, Zion, Bethel, Jerusalem, and Tabernacle. Denominational identity is rarely a part of a chapel’s name or signboard. In the early 20th century, the Welsh filled the chapels with evangelical fervor. Today, many chapels have small congregations, have been abandoned or converted to Indian restaurants or residential flats.

Among the chapel legacies are beautiful Welsh hymns such as Immortal, Invisible, Calon Lan, Here is Love, and, perhaps most famously, Guide Me, O Thou Great Jehovah, which is traditionally sung at Welsh rugby matches. John Hughes composed the soaring tune, Cym Rhondda, at his organ in a Pontypridd chapel in 1905. The organ remains, but the chapel is now the town tourist office and local history museum.

Across six centuries, some 600 castles were built in Wales. More than 100 of these are still in existence in one form or another, be it ruins, restoration, renovation or repurposing. The first to be built was Chepstow Castle, begun in 1067, the year after the Norman Conquest. The largest is impressive Caerphilly Castle, near Cardiff, built by the powerful noble Gilbert de Clare in the 13th century in his campaign to subjugate South Wales. You can travel any route through Wales and be assured that there is a castle never far away.

North Wales boasts four castles that are together a World Heritage Site. King Edward I had them built (among others) in the late 13th and early 14th century to solidify his hold on Wales. Conwy Castle stands on a promontory above the River Conwy at its estuary entering the sea. It guarded the river crossing and access to the Vale of Conwy. Perched between the Irish Sea and Snowdonia, Harlech Castle guarded the sea approach to Tremadog Bay and the mountains. Built beside the River Seiont, mammoth Caernarfon Castle, complete with walled town, guarded the Menai Strait from the south and Snowdonia to its east. On the Isle of Anglesey, Edward’s last castle, Beaumaris, overlooked the Strait to the north. Its concentric curtain walls and interiors were never completed. Together, historians consider them to be models of state-of-the-art military architecture for their time.

One place the Red Dragon’s themes come together for me is the small Carmarthenshire town of Laugharne (population circa 1,200) on the estuary of the River Taf. Perched over its shores is Laugharne Castle, the 13th-century Norman fortress now a romantic vine-swathed ruin.

The village radiating from the castle is made up of cottages and Georgian townhouses, the medieval parish church of St. Martin’s, shops, and taverns, including Browns Hotel. It was the favorite watering hole of poet Dylan Thomas, who lived with his wife in a boathouse just down the clifftop road and used an old tin-roof garage as a writing shed. Thomas portrayed the Threads of the red dragon.