All Aboard the Falkirk Wheel, in central Scotland 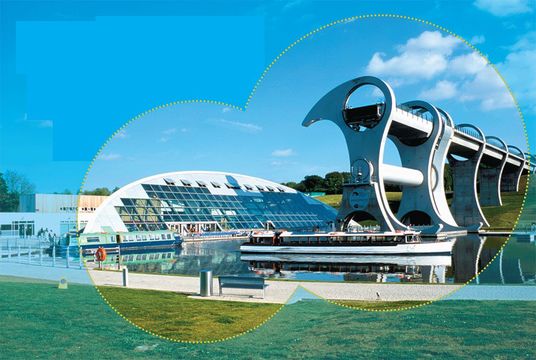 Connecting the Union Canal with the Forth & Clyde Canal, the unique Falkirk Wheel draws half a million visitors a year.PETER JOHN PHOTOGRAPHY/ALAMY

The only rotating boat lift in the world, connecting the Forth and Clyde Canal with the Union Canal.

Most tourists to Scotland have visions of tartan, highland games, castles, the clans, and other historical features, but more and more people are visiting the Falkirk Wheel—the world’s first and only rotating boat lift. Originally derived from ancient Greek and 19th-century ideas, the concept combines art, engineering and the latest technology to show off the best of modern Scotland.

As Scotland’s industrial output expanded following the Industrial Revolution, the traditional way of moving goods around cheaply and quickly was by canal. By the 1830s some 200,000 passengers and 3.3 million tons of goods were carried on canals annually.

The principal waterways in central Scotland, the Forth & Clyde Canal, and the Union Canal connected Glasgow and Edinburgh and met near Falkirk. That the Union Canal was 115 feet above its counterpart, however, was a major problem. Originally, this difficulty was overcome by installing a system of 11 locks spread over almost a mile. But passing through the locks took about eight hours. Now, the Wheel raises or lowers boats from canal to canal in around 15 minutes. 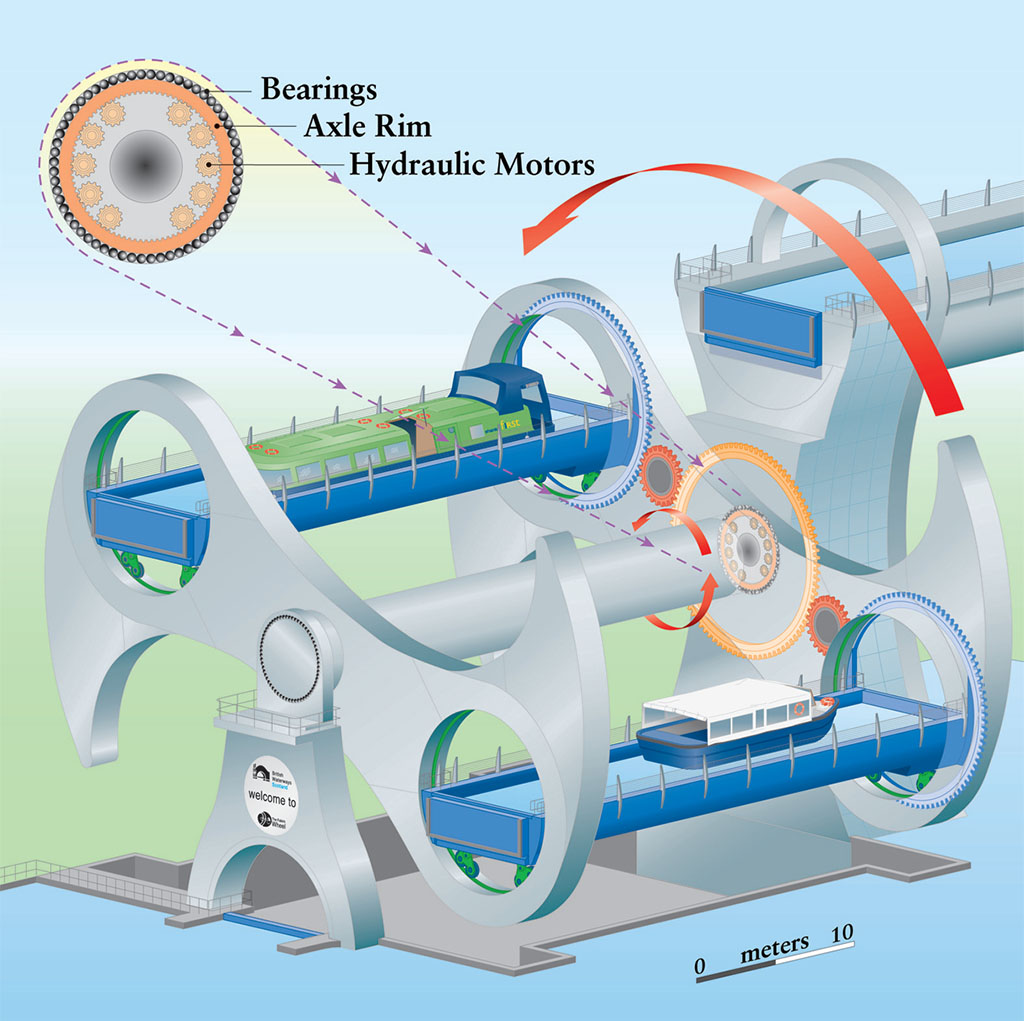 With the advent of the railways, canals fell out of use and the locks were eventually dismantled in 1933. As the 20th century drew to a close, however, they began to be used again for purely recreational purposes. British Waterways, the company responsible for the canals, decided that the Millennium should be marked by an iconic project that would be a memorial fit for the occasion. The outcome was the Millennium Link, an ambitious project to restore the canal system and reconnect Scotland’s two largest cities at a cost of around $135 million.

The Wheel, costing $28 million, is the Link’s central feature. Standing around 38 yards in height, the Wheel is made up of almost 1,320 tons of steel and 14,000 bolts. The northernmost section of the Wheel, the only part that actually moves, is an impressive structure, variously said to represent the shape of a Celtic double-headed spear or ax, the propeller from a Clyde-built ship or perhaps part of the skeleton of a fish. To others, it looks for all the world like a giant bird, pecking at scraps as it performs its task.

The remainder of the structure is simply an aqueduct to carry boats to and from the Union Canal. It has a beauty all its own as the arches above it, which are there simply to add symmetry, are reflected in the water to appear as a complete circle. It gives the impression of another tunnel that appears to end in midair.

Each gondola, the parts of the Wheel that carry the barges or provide the counterweight, has watertight doors at each end, just like a lock. The difference between the Wheel and a conventional lock system is that rather than water being pumped in or out, the gondolas are lifted or lowered so that the water in them is level with the water in the canal. When the watertight doors open again, a barge can simply sail in or out.

the science behind the Wheel is quite simple. The weight of the barge-carrying gondola and its load is counterbalanced by the weight of the water in the other gondola. An intricate system of cogs raises or lowers the gondolas—holding around 132,000 gallons of water in total. Each gondola, whether carrying barges or simply filled with water, weighs approximately 275 tons.

Despite the weight involved, the efficiency of the structure means that the power used for a single turn is no more than that required to boil eight domestic kettles. (Those who recall their school physics and Archimedes Principle will remember that an object, in this case, a boat, displaces its own weight of water, so the two gondolas are always equally balanced.)

All aboard the wheel

The Falkirk Wheel is 23 miles from both Edinburgh and Glasgow. It is clearly signposted from Junction 8 on the M9 and from the M80/A80 near Stirling. By train, the Wheel is easily accessible from Falkirk Grahamston or Falkirk High stations—either just a short taxi ride away. The Falkirk Wheel is open seven days a week from 10 a.m.www.thefalkirkwheel.co.uk

Everything about the operation, from keeping the gondolas level to the difference in the height of water between the gondolas (which cannot exceed three inches), is controlled by computer.

Visitors taking the short Wheel tour board one of the two covered barges, appropriately called the Archimedes or the Antonine, after a short introductory talk. The Wheel turns and visitors are lifted, almost without being aware of it. Then, the barge or barges (the gondolas can carry more than one at time) sail off along the Union Canal.

The barge continues through Roughcastle tunnel, specially built to allow the Antonine Wall, which runs over it, to remain undisturbed. This tunnel also acts as a gauge by only allowing boats of the required breadth to pass through. Any boat too wide to go through the tunnel would be unable to sail through the narrower parts of the canal it would encounter further on.

Once through the tunnel, the barge turns and makes the return journey through the tunnel and along the aqueduct into the gondola at the “dead end.” From that vantage point, high above the surrounding countryside, the Wheel gently lowers the gondola, initially giving the passengers the feeling they have dropped off the end in what the official brochure describes as “the most memorable yet gentle of white knuckle rides.” The whole trip takes around 50 minutes.

The canal ride also offers glimpses of the remains of the Antonine Wall, once the most northerly frontier of the Roman Empire, built on the orders of the Emperor Antoninus in AD 142. Parts of it were later incorporated into the Forth & Clyde Canal during the 17th century, but now the remains are preserved wherever possible. In practical terms, the four-yard-high earth wall, deep ditch and regular fortifications built along its length proved no barrier to the marauding Picts. Consequently, it was abandoned after just two decades. 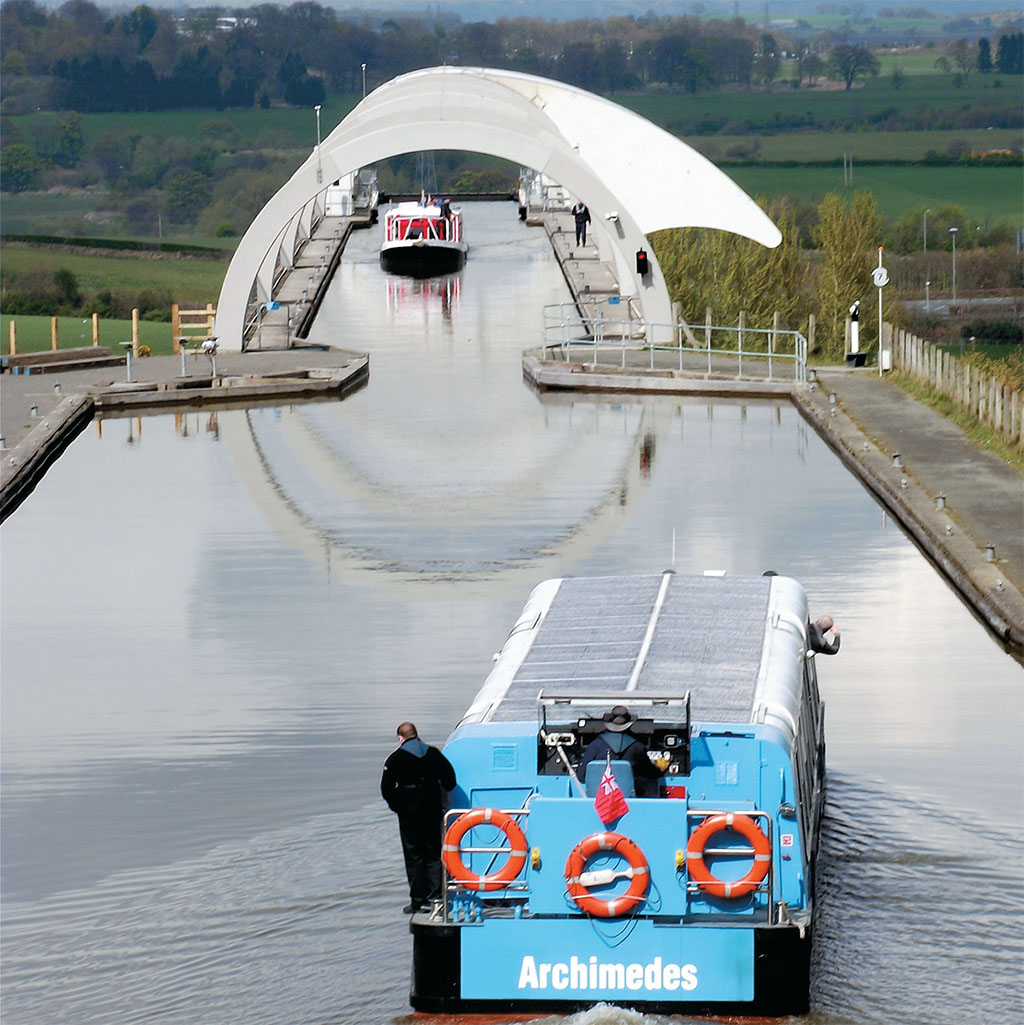 The Wheel’s own barge, Archimedes, gives way to a pleasure craft ready to sail into the aqueduct leading to the Union Canal. COURTESY OF THE FALKIRK WHEEL

Since the Wheel was officially opened in 2002, the structure has become one of Scotland’s leading tourist attractions. Having caught the public imagination, the Falkirk Wheel now draws around half a million visitors annually.

The “visitor experience” has also grown considerably since its opening. While the boat trips on the Wheel continue to be the attraction, there are plenty of other things to do. In addition to three miles of pathways (including walks to the Antonine Wall), there’s a cafe, shop and a new Waterplay area where children (and adults too!) can explore, play and learn how water is moved on canals and similar features around the world. Longer trips along the canals are available to those looking for a more complete adventure.

An excursion to the Falkirk Wheel is a truly unique experience. Although Queen Elizabeth opened the Wheel, security problems prevented her traveling on it. So, if you visit, you can always boast of taking the trip Her Majesty was denied. The Wheel’s own barge, Archimedes, gives way to a pleasure craft ready to sail into the aqueduct leading to the Union Canal.