The glorious dead - the war memorials around Great Britain 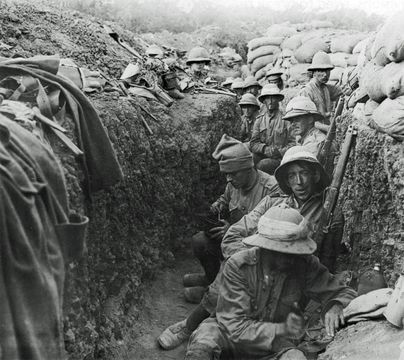 Soldiers in the trenches on the southern section of Gallipoli Peninsula during World War I. The men belong to the Royal Irish Fusiliers.Australian War Memorial.

In the aftermath of the First World War British people needed a place to focus their loss and grief. War memorials were erected up and down the country in a show of national pride that lasts to this day.

It’s commonly said that every British village, no matter how small, has a church and a pub. However, take another look and you’ll probably see a war memorial too. These monuments are so ubiquitous that they barely pass notice, yet they not only memorialize those who gave their lives for their country, they also mark a moment when the British people changed their attitudes to wars and those who fight in them.

This year 2020, marks 102 years since the end of the First World War, the perfect time to reacquaint ourselves with the solemn stone tributes the war created. The Great War of 1914-18, as it was known until an even bigger conflagration broke out in 1939, had a massive impact on the population of Britain. Every community sent men to fight; the vast majority had men who did not return. With something in the region of one million dead as a result of the war, the scale of the slaughter far exceeded that of any previous conflict.

Among the many changes in British society that the war brought about was a shift in how the country wanted to commemorate those who fought and died. Previously, statues and memorials tended to honor individuals who made notable contributions to the Empire’s wars overseas: generals, admirals, politicians, and princes. The rank and file was conspicuous its absence, the mere foot soldiers forgotten in favor of those who led them.

The first indication that things had changed in the aftermath of the First World War came in the public’s reaction to the Cenotaph in Whitehall. Originally intended to be a temporary structure marking the signing of the Treaty of Versailles, the Cenotaph – a raised, empty tomb representing all those who died in the Great War – was hurriedly designed by Edwin Lutyens and swiftly constructed from wood and plaster in time for the Peace Day Parade in July 1919. The base of the monument was buried underneath floral tributes left by the British people for weeks afterward and the decision was soon made to replace the wooden Cenotaph with a permanent replica constructed from Portland stone.

Read more: Ironmasters of Wales - history forged in the Valley 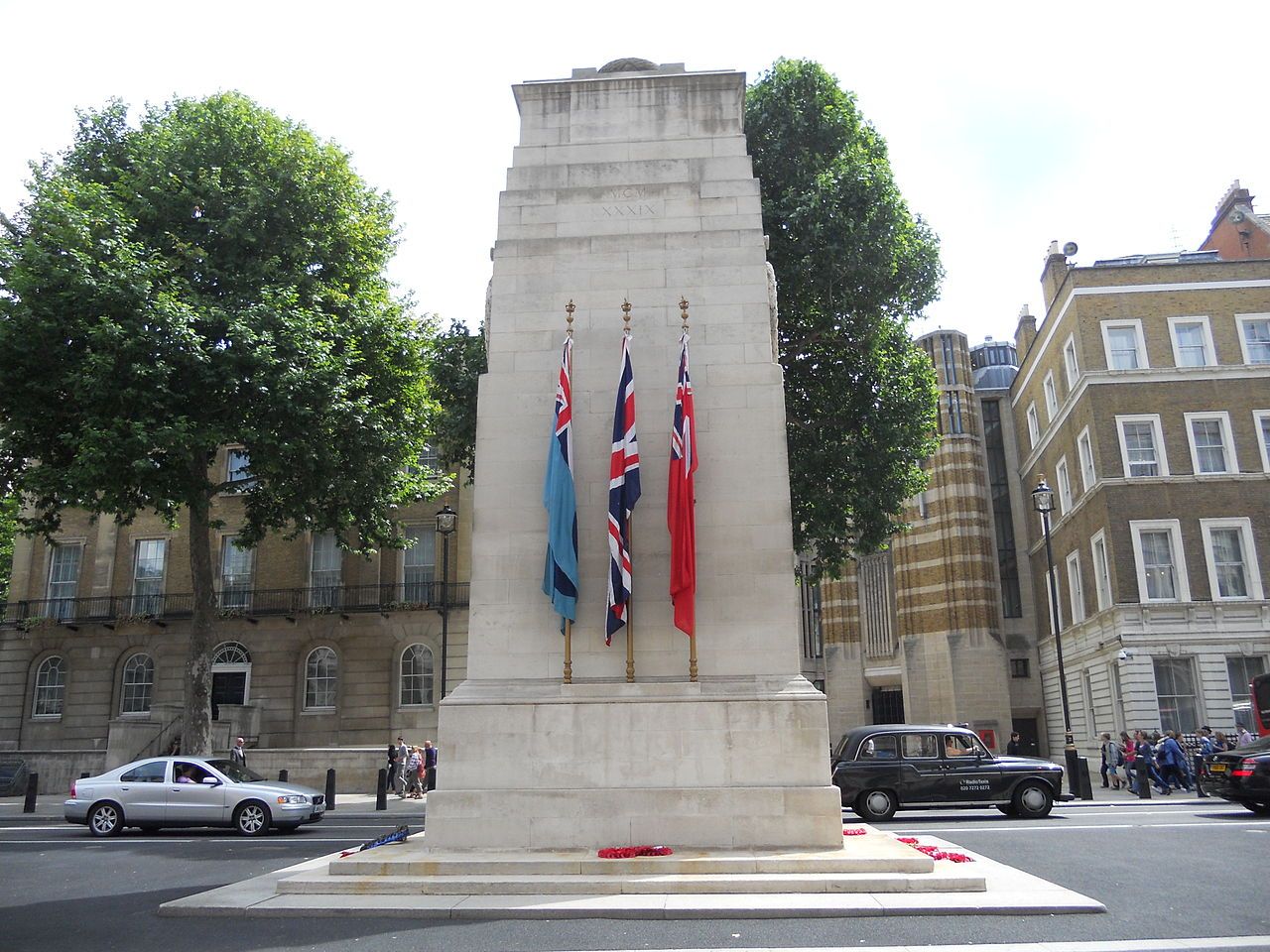 The iconic limestone monument with inscriptions dedicating it to “The Glorious Dead” still sits upon Whitehall and is Britain’s most famous war memorial, courtesy of the annual National Service of Remembrance. Held at 11 o’clock on the closest Sunday to 11 November, the ceremony sees the reigning monarch, Prime Minister and representatives of the armed services lay poppy wreaths at the Cenotaph. Yet there are tens of thousands of other memorials in cities, towns and villages throughout the country, each of which is marked with the names of locals who died in the conflict and the focal point of their own Service of Remembrance.

Lutyens was responsible for some of these community memorials too. Manchester, Rochdale, and Southampton all play host to similar Cenotaph-style monuments, although there are subtle differences – Rochdale’s is not strictly a cenotaph since the sculpture atop the pillar is a human body rather than a tomb, while in Manchester a body lies atop the tomb. 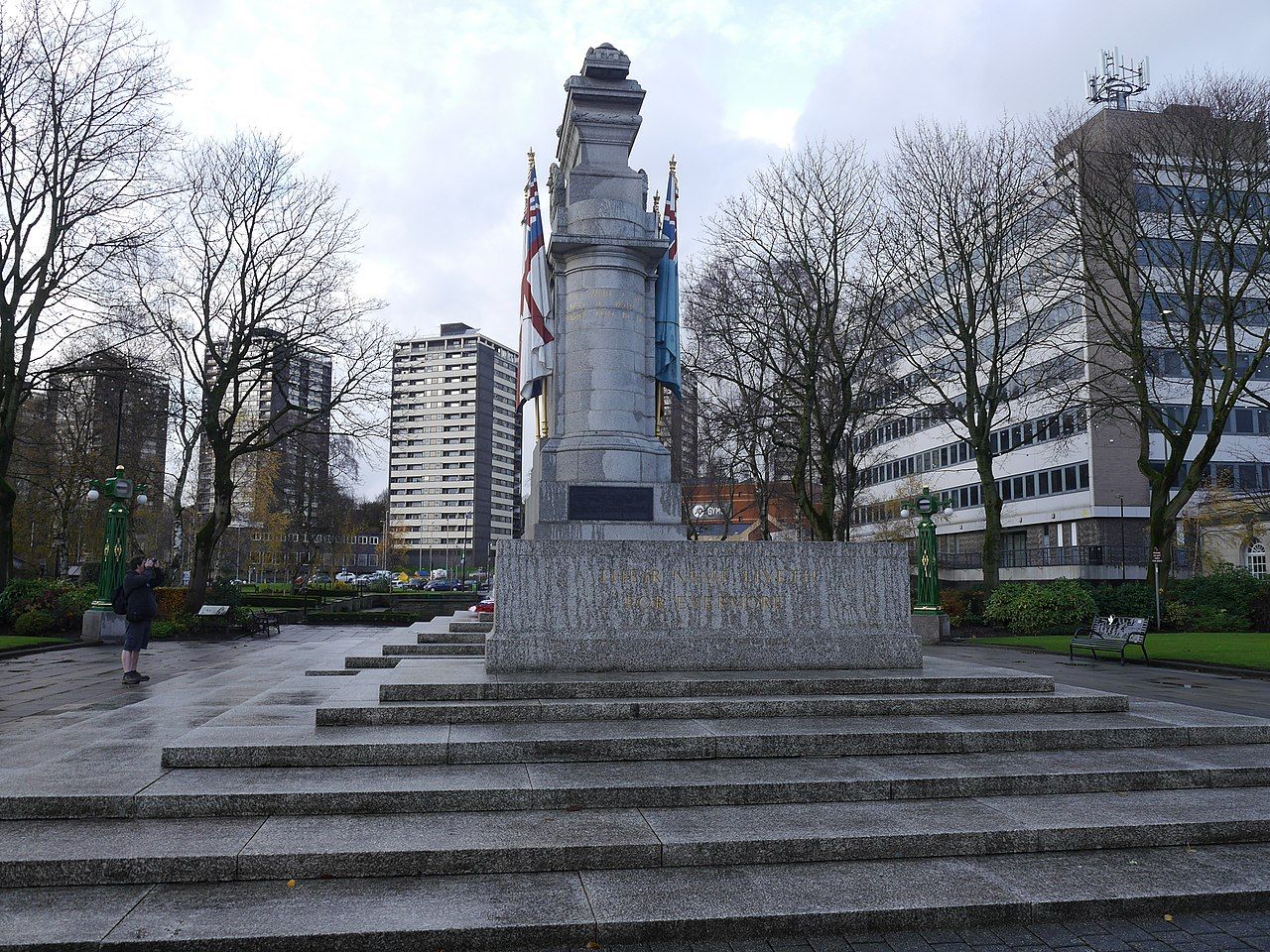 However, not all war memorials were the same. Since each community’s monument was erected as a result of local action, the small parish committees involved approved a diverse range of designs. Lutyen’s cenotaphs in the Classical style deliberately avoided Christian symbolism, but many others actively embraced it. Trumpington, on the outskirts of Cambridge, has a four-and-a-half meter high cross atop a stone plinth, while the column and cross at Briantspuddle in Dorset soars even higher towards the heavens. The religious symbolism is even more overt in Meriden in Warwickshire, where a cast-iron Christ is portrayed nailed to a timber cross.

Other war memorials embraced aspects of British history and heritage. Bedford’s war memorial has a sculpture of a Crusader knight with a dragon, an obvious nod to England’s patron saint, while that at St John’s Wood in London – not much further than a decent throw from Lord’s Cricket Ground – has St George actually slaying the dragon. 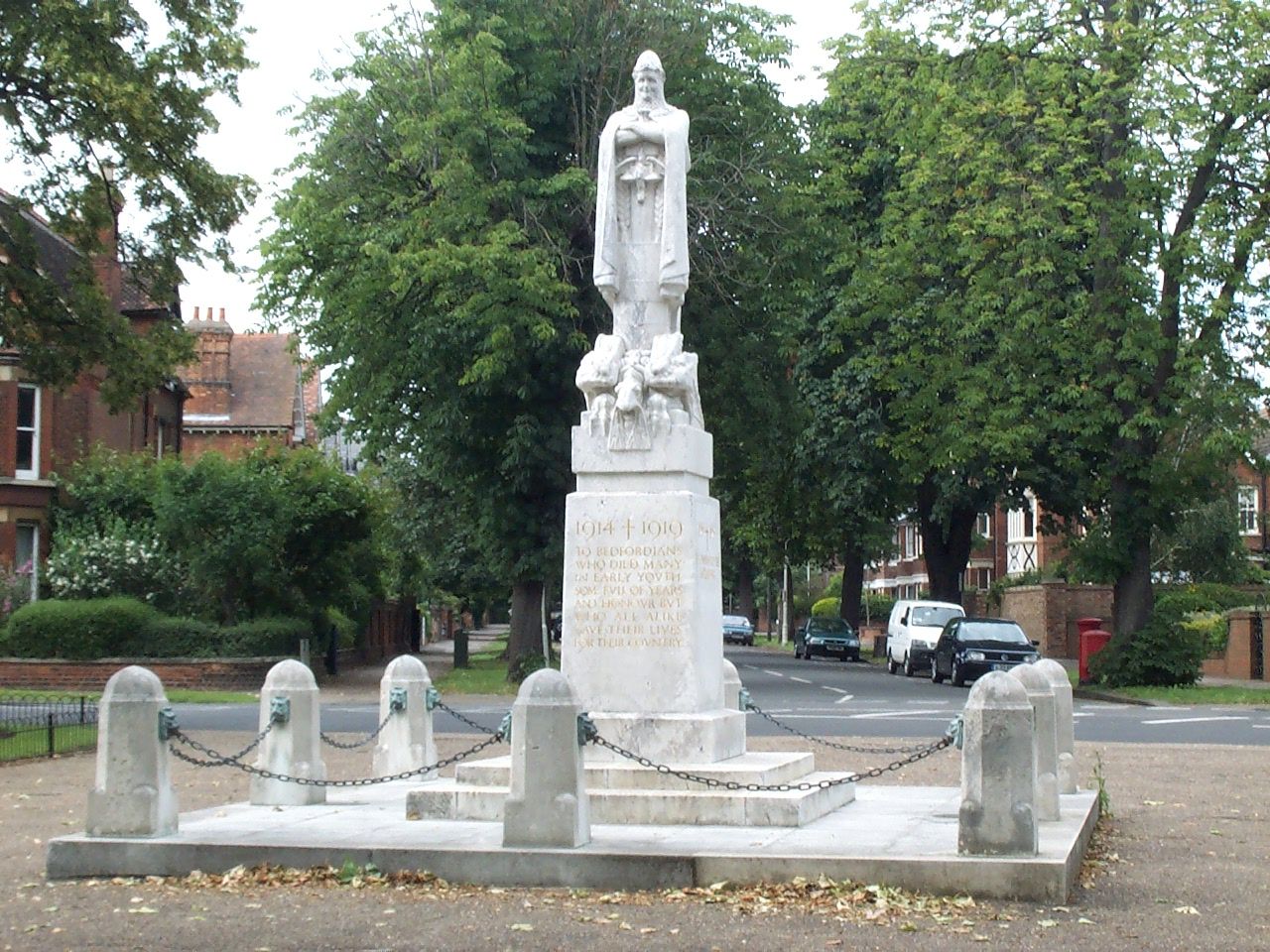 Bedford’s war memorial has a sculpture of a Crusader knight.

Many memorials were designed by artists who wanted to depict a more realistic perspective, the most famous of which is the Royal Artillery Memorial in London’s Hyde Park Corner. Here, a First World War 9.2-inch howitzer sits upon a large plinth of Portland stone on which reliefs depict scenes from the conflict. Four bronze figures of artillerymen are positioned around the outside of the memorial, one of whom has succumbed to his injuries. In a similar realist vein, actual artillery shell casings flank the concrete pyramid at Chilwell in Nottinghamshire, where nearly 20 million high-explosive shells were produced in the nearby factory.

In London’s Battersea Park, artist Eric Kennington’s memorial to the 24th East Surrey Division depicts three soldiers in full kit with helmets and rifles. The figure on the left, from the Third Battalion of the Royal Welch Fusiliers, is said to be modeled on I, Claudius author Robert Graves, whose memoir Good-Bye To All That includes an unflinchingly graphic account of his time in the trenches. Far from the capital, at Oban on Scotland’s west coast, it’s fitting that the rugged war memorial reflects the windswept coast – here, a sculpture of two soldiers struggling to carry a wounded comrade sits upon a base of rough granite boulders. 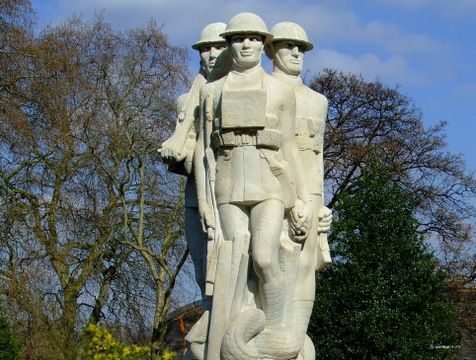 Those who are prepared to step off the beaten track may find war memorials in some unusual places. The monument in Troedrhiwfuwch in Glamorgan is pretty much all that survives in what is now a ghost village – the rest of it was abandoned in the 1980s after the steep decline of the local mining industry. This once-thriving community suffered the loss of 16 men in the First World War, three of whom died on the same day at the Second Battle of Ypres. Meanwhile, those who climb to the top of England’s highest peak, Scafell Pike in Cumbria, will find a plaque dedicated to the memory of the Lake District men who died between 1914 and 1918.

Something a little different can be found in one of 53 parishes scattered throughout the country in which no person died in the First World War. Named “thankful villages” by Arthur Mee in the 1930s, the lucky residents of these places still wanted to commemorate the passing of the Great War in some way. In the churchyard of St Mary the Virgin in Middleton-on-the-Hill in Herefordshire, a stone sculpture of a lantern symbolizes the relief the community felt upon their menfolk’s safe return, while the inscription below reads: “At evening time it shall be light. For the safe return of all the men from this parish who fought in the Great War.” Somerset seems to have been a particularly fortuitous place to have lived, with nine thankful villages, two of which – Stocklinch and Woolley – consider themselves doubly thankful as they lost no men in the Second World War either.

The Great War is not only commemorated in monuments of stone. Drive the A30 in Wiltshire and you cannot miss a series of badges cut into a hill near Fovant, dug by soldiers based at a nearby army camp. They carved 17 regimental insignias and filled them with chalk while they were awaiting shipment to the Western Front, a 20th-century version of the prehistoric Uffington White Horse. A couple of decades after the armistice, the local community decided to restore the five badges in the best condition as a memorial to the soldiers who died in the war, with three more being added after the Second World War.

Many First World War memorials were created in the inter-war years, but the process of remembering those who died is by no means complete. The National Memorial Arboretum opened as recently as 2001. Located at Alrewas in Staffordshire, the arboretum is a national site of remembrance – 150 acres of woodland interspersed with more than 350 memorials to those who have served the nation during wartime. Among the notable memorials from the Great War is the Shot at Dawn memorial, commemorating the 309 soldiers executed after courts-martial and whose names were often missing from their community war memorials. The moving concrete sculpture shows a soldier awaiting execution, blindfolded and tied to a stake, in front of a semi-circle of wooden stakes, each of which carries the name of one of the unfortunate soldiers.

Back in the capital, one of Britain’s most recent memorial constructions is the twisted stone ring – a modern take on the wreath – erected at Islington Green in London in 2007. It’s a strikingly modern design compared to the previous whitewashed concrete obelisk, a structure designed to be temporary but that actually lasted 87 years!

The creation of the National Memorial Arboretum and replacement of the Islington Green memorial illustrates that, even in the 21st century, the First World War continues to exercise a grip on the nation. Remembrance is not confined to the Cenotaph – services take place at almost every one of the thousands of war memorials dotted around the country, with attendees vowing “we will remember them”.

Who do they remember? They remember not the generals and politicians who led the armies, but the common soldier on the front lines. The horror of the slaughter of the men in the trenches who fought in “the war to end all wars” was seared onto the national consciousness. Unfortunately, their quest to end war failed. 21 years later, the world was at war a second time and the Great War memorials were co-opted to serve as commemorations for another hideous conflict.