"For valour" - A history of Britain's Victoria Cross medal 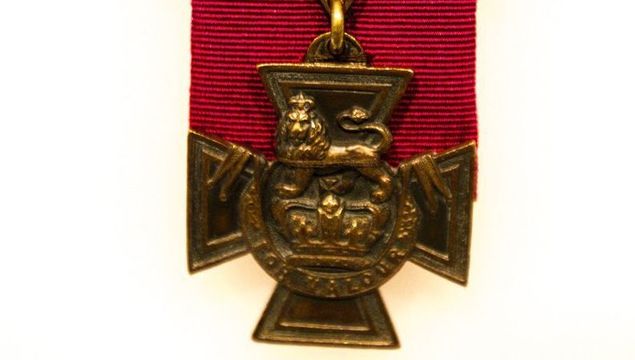 A medal awarded to those who 'perform acts of conspicuous courage and bravery' here is just a short history of some of the heroes who earned it.

Since 1856, 1,351 British and colonial soldiers have won the right to wear the Victoria Cross, a medal awarded to those who 'perform acts of conspicuous courage and bravery.'

The medal in the shape of a small Maltese Cross is made of bronze taken from Russian guns captured at Sebastopol during the Crimean War. This decoration, hanging from a purple ribbon, is Britain's highest award for gallantry and heroism in battle.

On the morning of 26th June 1857, Queen Victoria presented the first 62 recipients with their medals in a ceremony held in Hyde Park. The Queen stated that the medal should be awarded to those who 'perform acts of conspicuous courage and bravery'.

One of the first recipients was a Crimean War veteran, Lieutenant Charles David Lucas. On 21st June 1854, while serving on board H.M.S. Hecla during the campaign in the Baltic Sea, Lucas picked up a live Russian shell that had landed on the ship's deck and threw it overboard where it exploded. Lucas became the first winner of the newly coveted award and proudly received it from his monarch's own hands. While the Royal Warrant founding the Cross had not been issued until 29th January 1856, it was awarded retroactively to a total of 112 recipients for their service in the Crimean War.

Other early recipients of the VC included Sergeant Richard Wadeson of the 75th Regiment of Foot, who received the honour less than one month after the Hyde Park ceremony for rescuing two privates who were about to be cut down by enemy cavalrymen during the Mutiny in India.

On 27th July 1880, Sergeant Patrick Mullane of the Royal Horse Artillery performed a similar act of selflessness at the battle of Maiwand during the Second Afghanistan War. Mullane's battery was withdrawing before the enemy when he saw a fellow soldier fall from his horse, mortally wounded. Mullane quickly ran back and dragged him to the gun limber where the man died almost immediately. Later on the same day, Mullane volunteered to fetch water for the wounded and succeeded in doing so by going into one of the nearby villages where many of his comrades had already been killed.

Several of the heroic deeds deemed worthy of the VC during the 19th century were performed by pipers who inspired their comrades in the heat of battle. Piper Findlater of the Gordon Highlanders, though wounded in both legs, continued playing his instrument at Dargai during fighting on the north-west frontier of India in 1897. Piper James Richardson of the 13th Battalion (Canadian Scottish), Canadian Expeditionary Force, also won the VC for his actions on the Western Front. His Victoria Cross citation reads:

For most conspicuous bravery and devotion to duty when, prior to attack, he obtained permission from his Commanding Officer to play his company 'over the top'. As the company approached the objective, it was held up by very strong wire and came under intense fire, which caused heavy casualties and demoralised the formation for the moment. Realising the situation, Piper Richardson strode up and down outside the wire playing his pipes with the greatest coolness. The effect was instantaneous. Inspired by his splendid example, the company rushed the wire with such fury and determination that the obstacle was overcome and the position captured.

Later, after participating in bombing operations, he was detailed to take back a wounded comrade and prisoners. After proceeding about 200 yards Piper Richardson remembered that he had left his pipes behind. Although strongly urged not to do so, he insisted on returning to recover his pipes. He has never been seen since, and death has been presumed accordingly owing to lapse of time.

Originally, the medal was bestowed only upon survivors, but many of the recipients from the First World War onwards died in the act of winning the VC. King Edward VII first approved the idea of awarding the medal posthumously, as well as to survivors, in 1902. The King presented two of the earliest posthumous awards in 1907 to the families of Lieutenants Teignmouth Melvill and Nevill Coghill of the 24th Foot, who were both killed attempting to save the Queen's Colour at the tragic battle of Isandhlwana on 22nd January 1879 at the outset of the Zulu War.

Other Victoria Cross winners include Wing-Commander Guy Gibson, leader of the 'Dambuster' raids in 1943; Lord Roberts, who won it as a young lieutenant during the Indian Mutiny (and whose son was awarded the medal during the Boer War); John Cornwell, the 16-year-old gunner who was mortally wounded while tending his gun on board H.M.S. Chester during the battle of Jutland in 1916; and the heroes of Rorke's Drift in the Zulu War of 1879, who earned a remarkable 11 crosses.

In addition, one medal was awarded to 'The unknown warrior of the United States of America' and placed on the grave of the Unknown Soldier in the vault of the Memorial Amphitheater at Arlington National Cemetery by Lord Beatty on 11th November 1921. This VC symbolically honoured all the men and women who died for the Allied cause during the Great War. (The Unknown Warrior who lies in Westminster Abbey received the reciprocal award of the Congressional Medal of Honour, but not the VC.)

One of the latest VCs was the posthumous medal presented to the widow of Lieutenant Colonel Herbert ('H') Jones, who was killed at Darwin, East Falkland on 28th May 1982, while leading the 2nd Battalion, the Parachute Regiment, against a strong Argentine position.

In a few rare cases, a bar was awarded to VC winners for a second act of bravery. Two members of the Royal Army Medical Corps share this unique distinction: Lieutenant Arthur Martin-Leake, who won his VC during the Boer War and was granted the bar during the First World War; and Captain N. G. Chavasse who won both distinctions during the Great War. Contrarily, eight recipients of the Cross originally had their names erased from the VC Roll for discreditable acts, including Edward Daniel, RN, who received the Cross for bravery in the Crimean War but was found to be drunk on duty on several occasions after the war. Since King George V expressed his wish that the medal should never be forfeited, no matter what the crime, the names of these eight recipients have been restored to the roll.

While the Victoria Cross is awarded primarily to members of the armed forces, civilians are eligible if they are serving with the military. Three magistrates in the Bengal Civil Service won the medal during the Mutiny, and a fourth, a clergyman, earned the Cross during the Second Afghanistan War. Also, while the medal generally recognizes service in battle, several have been given for heroic deeds, not in the face of the enemy. One medal was awarded for extinguishing a fire in a railroad car full of ammunition in 1866, and five VCs were won by soldiers of the 24th Foot for their courage in saving the lives of comrades during a storm at sea off the Andaman Islands in 1867. Although women are eligible to win the Cross, as of yet none have received the medal.

The medal brings with it a small annual pension and current recipients are entitled to membership in the elite 'Victoria Cross and George Cross Association', which was formed in 1956 with Sir Winston Churchill as President, though the great statesman was not a VC winner himself.

Occasionally the medals come up for auction, where they always sell for extremely high prices. Many of the medals can be seen today in regimental museums including the National Army Museum in Chelsea and the Imperial War Museum, Lambeth. In 1997 a new, permanent exhibition of the Victoria Cross and George Cross Collection, consisting of 25 VCs and 16 GCs (the civilian equivalent of the VC), opened at the Imperial War Museum. At the opening by the Prince of Wales, the actual ingot of metal from the captured Russian cannons was displayed before being returned to its secure vault. Whether that ingot will ever be used again remains to be seen, but when the call goes out for war, men and women will step up to the challenge like their predecessors and perform the heroic deeds that inspired the Victoria Cross.