Touring the history of tweed in the Outer Hebrides 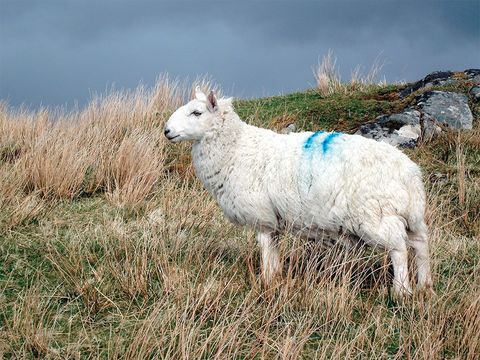 Cheviot sheep, adapted to the rugged life of the Outer Hebrides, provide the wool for Harris Tweed.Forbes Inglis

In the Outer Hebrides, they make cloth the old-fashioned way to the highest quality in the islands off Scotland.

Harris Tweed. The product of one of the few remaining cottage industries in the Western world is a truly iconic brand. To be designated as Harris Tweed, the cloth has to be made up of 100 percent wool. It then, despite its name, has to be prepared, spun and handwoven on the island of Harris/Lewis or any of the other islands in the Outer Hebrides, and finished there to merit the Orb symbol, the sign that it is the genuine article.

Although often thought of as two separate islands, Harris and Lewis in fact occupy a single landmass sometimes called the Long Island. Lewis forms the largest part of the island, with Harris to the south. After the nearly three-hour ferry journey from Ul-lapool to Stornoway, the principal town on Lewis, I  was ready to learn more about the manufacture of this world-famous product.

Visits to the Carloway Mill and the mill belonging to the award-winning Harris Tweed Hebrides organization on Lewis provided a fascinating insight into the processes required to prepare wool for weaving.

The bulk of the wool made into Harris Tweed comes from Cheviot sheep and arrives at the mills in the form of scoured (washed) wool. Before scouring, the raw wool is said to be greasy, as it contains lanolin, a natural oil that is very good for the hands and actually used in many beauty products. 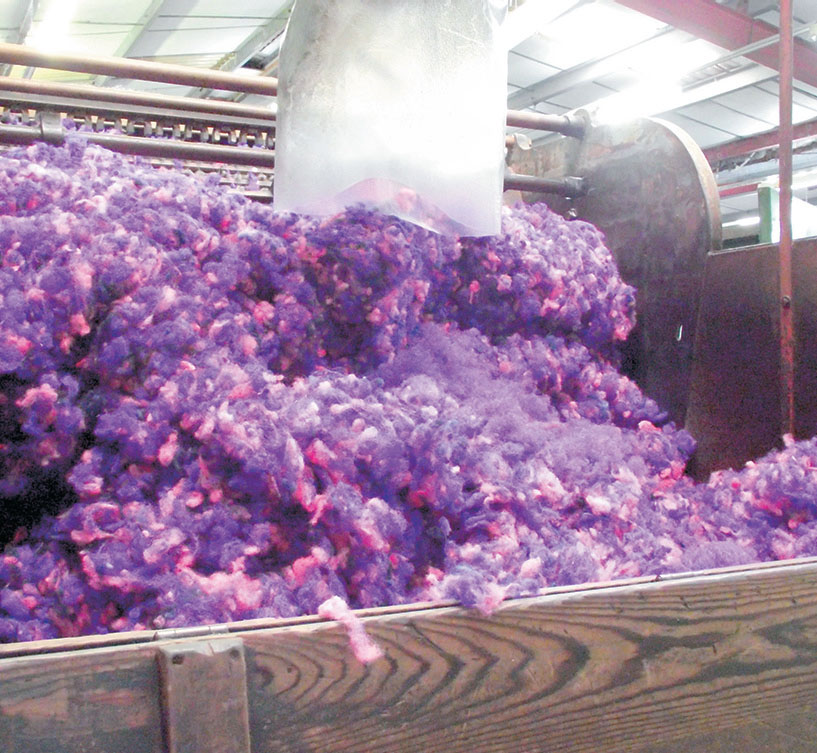 At Carloway Mill, scoured fleece is dyed, then carded and prepared into tape for spinning. Finally, the huge spinning engines turn the fibers into yarn that will be warp and weft on the handlooms of cottage weavers.

The journey from scoured fleece to fabric starts with dyeing. Dyeing the wool rather than the spun yarn is what gives Harris Tweed its rich variety of colors. In the old days, the dyes were made from naturally occurring materials, which is why tweed reflected the colors of the flora and fauna and the Hebridean landscape. Today, modern chemical dyes now give greater consistency and flexibility to produce an increased range of colors.

Following the dyeing process, several different shades of wool are often mixed by weight to achieve particular shades. Further mixing and shredding ensure that the mix is constant, with often spectacular color. 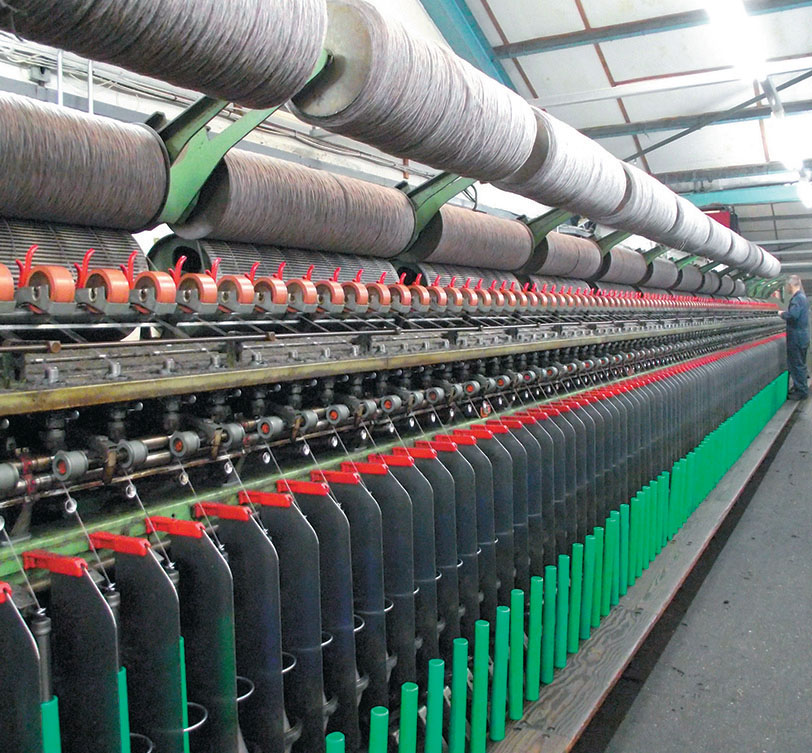 The mixture is then carded, a process of combing out the fibers that is repeated several times before the wool is rolled into individual tapes ready for spinning. It is the spinning process, during which the tape is drawn out and twisted to give the thread its strength, that produces yarn strong enough for weaving. The yarn is spun onto bobbins to be used as warp or weft in the finished cloth. The long threads that run the length of the cloth are known as the warp, while the threads fired across the loom are called the weft.

Warping is one of the most important stages in the entire process, as that is where the colors of the cloth are determined. Depending on the width and density of the finished cloth, several hundred individual bobbins are arranged in color order and the yarn is wound onto the beam that will supply the warp to the loom.

Although a few individuals still spin yarn by hand, most of the preparing and spinning is done at one of the commercial mills on the island. Weaving, however, is another matter, for that is where the distinction that makes Harris Tweed unique comes in; all the fabric has to be woven on looms driven only by pedal power. The weaving process, which takes place in homes and sheds (another legal requirement) by self-employed weavers throughout the Outer Hebrides, has remained relatively unchanged over the centuries.

Before the weaver gets down to weaving, however, he or she must tie each individual thread on the new beam to one of the threads of the previous cloth before feeding the new warp into the loom. It is a long and laborious operation. 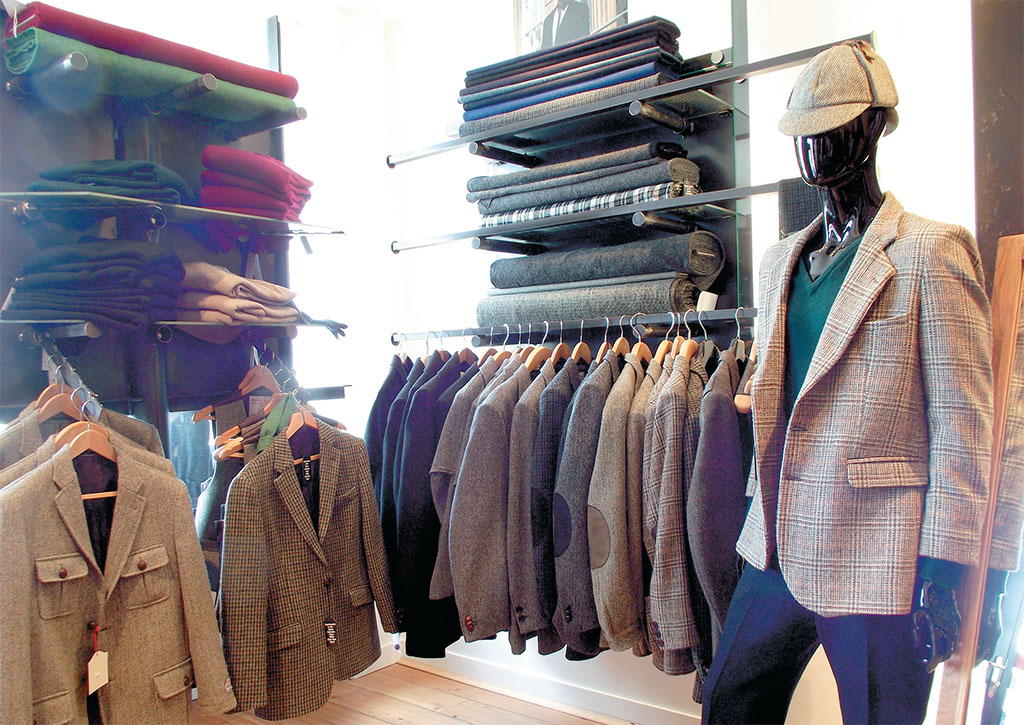 Find a range of Harris Tweed goods, from measured cloth to gamekeepers coats and sport jackets at the Harris Tweed Hebrides shop in Stornoway.

As well as the warp beam, the weaver will also have taken delivery of the weft yarn, or yarns if the weft is also to be made up of a variety of colors, required to make the finished product.
Using only his own physical effort to power the loom, the weaver will then spend the next day or perhaps longer, weaving a single length of cloth. Occasionally, the weaver will have to stop the loom to repair a broken thread or change the yarn in the shuttle. Any form of automation of power is forbidden, otherwise, the product cannot be described as Harris Tweed. That might seem unnecessary in our modern society, but because hand weaving sees all the weaver’s attention focused on that one piece of cloth, the quality of the product is second to none.

Even allowing for the level of quality handloom weaving, there may still be minor flaws in the clot produced. Every inch of the cloth is inspected against a light and any imperfection darned or repaired. While repairs may be necessary, they are the exception rather than the rule, as the level of pride that weavers take in their work means that the woven cloth is invariably of a very high standard. 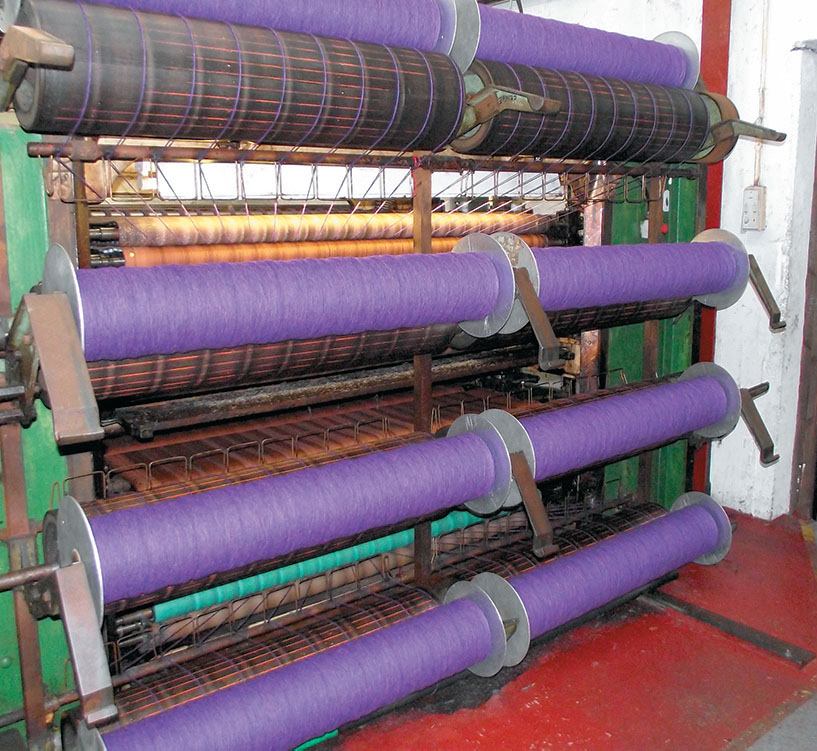 One of the challenges in the industry is the age range of the 100-150 weavers, with many now aged 55 or over. Although the industry has experienced peaks and troughs in demand over the years, marketing and quality have secured its future and resulted in an increase in the number of younger weavers.

In Port of Ness, in the very north of Lewis, I met Mike Donald, one of the new generations that sees a positive future for the industry. A native of Lewis, Donald spent 15 years in Glasgow before returning to the family croft where, like most of his colleagues, he combines weaving on a shuttleless double-width loom with other income streams. In Donald’s case, this consists of looking after his small, but expanding flock of Hebridean sheep, and writing.

Another weaver, Sheila Roderick from Scalpay, a small island connected to Harris by a bridge, trains new weavers. She is also convinced that there is a bright future for Harris Tweed, especially once a new mill opens next year on North Uist. She believes that as the new facility will include scouring, the mill there will be able to process local wool and so will allow more local crofters to become involved in the industry 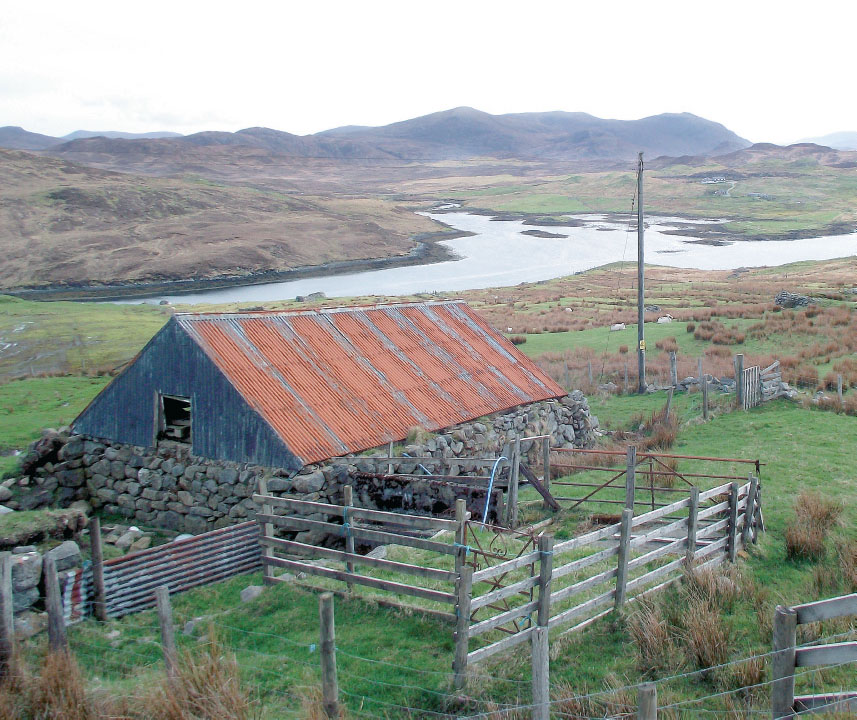 Newly woven cloth still looks quite open and feels stiff. Further processing is required, both to clean it and to soften and thicken the individual threads. This process is known as waulking. Years ago, this was carried out by the local women who passed the time by singing what came to be known, for obvious reasons, as “waulking songs.”

The term waulking simply means, well, walking. Historically, the fabric was waulked or treaded, often in urine, with the ammonia content acting as a cleansing agent. These days, the process is simply carried out using pure water in a machine that replicates the walking process. As well as thickening and softening the fabric, waulking removes any impurities, including any lanolin or excess oil remaining in the yarn.

After drying and pressing, just one further action is required to complete the process. An employee of the Harris Tweed Authority inspects the cloth and, after being satisfied that it meets the strict rules and is of the high standard required, stamps it with the Harris Tweed Orb symbol. Only then can the cloth be called Harris Tweed.

The Harris Tweed Authority is a completely independent body, charged with ensuring that the legal requirements necessary to produce genuine Harris Tweed have been met. 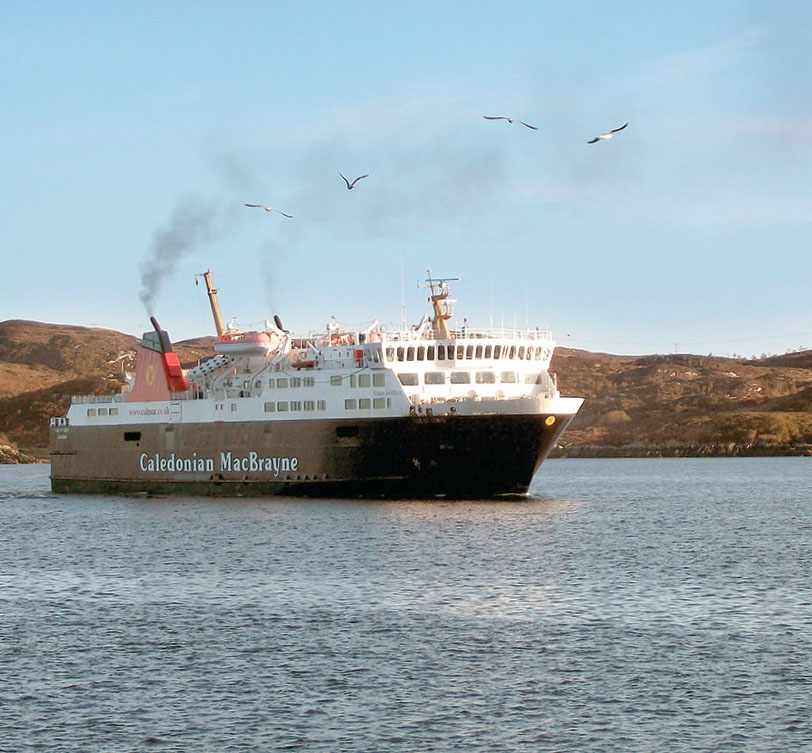 From left to right: Catch breathtaking views from this croft on Lewis; it’s an emerald sea and golden beach near Seilbost; The Isle of Lewis is about to dock in Stornoway; Catch a glimpse of Stornoway’s quayside.

Unsurprisingly, the Authority is known as the Guardian of the Orb. Harris Tweed is known throughout the world as a quality product but that reputation has resulted in many inferior imitations trading on its name. One of the many functions of the Authority is to take legal action anywhere in the world against any producer trying to use the name Harris Tweed to describe a product made outside of the Hebrides.

Harris Tweed has come a long way from being a genuine cottage industry, and gone are the days when the Tweed was worn only by gamekeepers, anglers, and other outdoor enthusiasts because of its waterproof, hard-wearing properties. Though it is still woven on handlooms, the industry is now a large commercial concern supplying a top-of-the-range fabric used by many of the world’s top designers and fashion houses and worn by many famous celebrities. 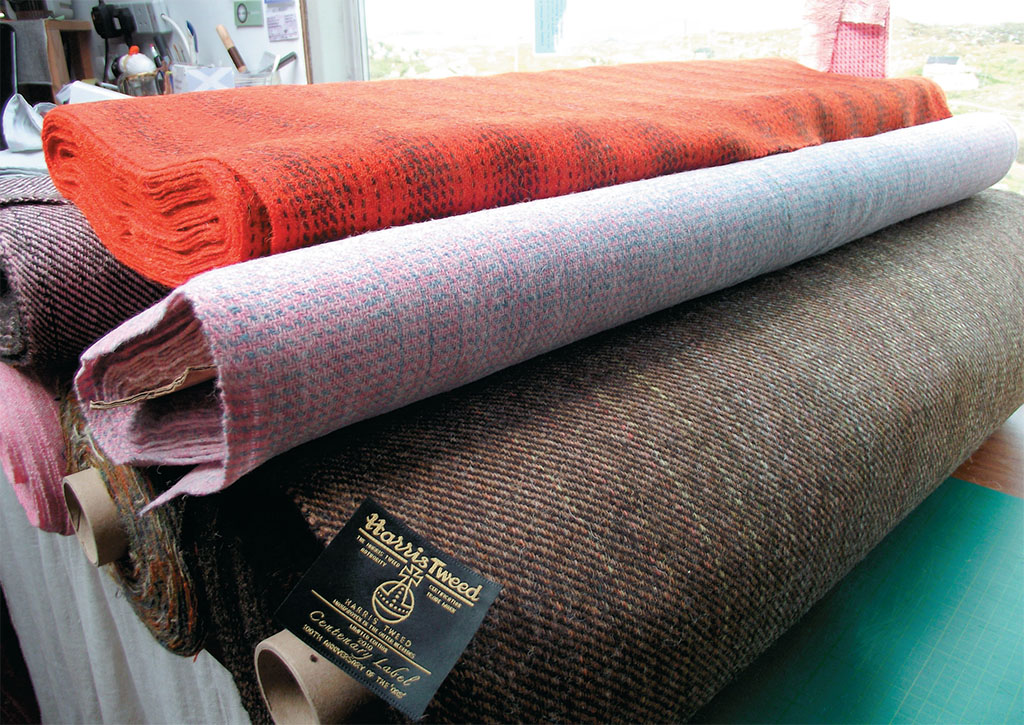 Dyed, spun, woven and waulked: Bolts of hand-woven cloth are carefully inspected before receiving the Orb that makes them Harris Tweed.

Although Harris Tweed remains a product that reflects its roots in the land and people of Harris and Lewis, it has moved on from that. Some of the cloth still reflects the landscape, from the lowlands of Lewis and the lunar-like rocks of parts of North Harris to the spectacular beaches and richly colored seas of the south, but the range has been expanded. This has widened its use, and the fabric is now used for a host of diverse items including trainers, purses, soft toys, and even covers for tablets or e-readers, available in the Harris Tweed Hebrides’ shop in Stornoway or from retail outlets throughout the world.

Products made from Harris Tweed are not cheap, but purchasers can be sure of one thing: Fabric marked with the Orb will always be of the highest quality.

For more information on Harris Tweed visit www.harristweed.org, www.thecarlowaymill.com or www.harristweedhebrides.com or simply search for Harris Tweed on the net.
Lewis and Harris lie off the northwest coast of Scotland. It is possible to fly to Stornoway from most Scottish cities, www.hial.co.uk.

By road (A835), the journey from Inverness to Ullapool takes approximately 90 minutes and the ferry crossing www.calmac.co.uk another almost three hours.

Further information about the many tourist attractions and details of accommodation can be found at www.visithebrides.com.