Denizen of the deep - the Loch Ness Monster 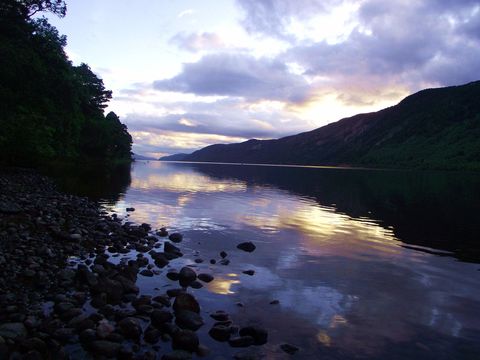 Urquhart Castle is surely one of the most picturesquely situated castles in the Scottish Highlands. Located 16 miles south-west of Inverness, the castle, one of the largest in Scotland, dominates a sandstone bluff overlooking much of the length of Loch Ness.

In the past the location endowed Urquhart with strategic importance; as far back as the beginning of the Christian era, a small Iron Age fortification occupied this promontory.

Today, visitors come to stroll through the ruins of the late-13th century castle, which was blown up in 1692 to prevent the Jacobites from occupying it. More interestingly, they come because Urquhart has earned the reputation of being one of the best spots for sighting Loch Ness's most famous inhabitant.

Its formal name is Nessiterras Rhombopteryx, a name bestowed by Dr Robert Rines, President of the Academy of Applied Science and Sir Peter Scott, Honorary Chairman of the World Wildlife Council International. But for more than 55 years she's been known by a more familiar name. To both advocates who swear to her existence, and to sceptics who see her only as a figment of creative Scottish imagination, she is simply 'Nessie'.

Nessie's home, Loch Ness, is as well known as she is. Its surface is second in size among Scottish lochs to Loch Lomond. In volume, though, it is the largest freshwater lake in Britain.

Loch Ness lies in the Great Glen, a fault believed to have been formed by a rift some 300 to 400 million (or as much as 700 million) years ago. The fault cuts across northern Scotland from the north-east (the North Sea) to the south-west (the Atlantic). As much as 25,000 years ago, glaciers created the three land-locked lakes--Ness, Oich, and Lochy--which extend across the highlands within the Great Glen.

The surroundings are spectacular. Loch Ness is a moody lake, subject to quick change. One moment it is placid, the next it is abruptly beset by wind and wave. Mountains separated by deep glens rise from the shore-lines along much of the loch. A ribbon of a road, the A82, winds its way along the north-western shore, going north, passing Urquhart Castle after detouring at Drumnadrochit.

Nessie's history goes back a long way; at least to the mid-6th century AD when St. Columba , founder of the first Christian monastery in Scotland, supposedly made the first sighting. It is said that on his way to visit the king of the northern Picts near Inverness he encountered the loch's water monster, a fact attested to by his biographer, a later abbot of Iona named Adamnan.

There were no verified reports of sightings until 1933, although in the intervening centuries sporadic stories circulated of a gigantic creature lurking in the depths of the loch. A gentlemen I met in Inverness told me the underwater creature was called a 'kelpie' (water horse) in Gaelic and that sighting it was considered a bad omen. It is little wonder that no sightings were reported. If a farmer in the Highlands chanced to see a kelpie, he was unlikely to call attention to the fact. Also, until recently, the Highlands was a remote, barely accessible area and the news did not travel quickly.

All this changed in 1933 when a new road was constructed along the north-western shore of Loch Ness. Nessie-sighting developed into a favourite pastime for travellers to the Highlands, as did the perpetration of hoaxes by celebrity seekers. But in the years since Nessie leapt suddenly into prominence, many sightings have been substantiated by reputable individuals: monks, lawyers, scientists, even Dr. Richard Synge, a Nobel prize-winner.

There were few serious attempts to locate and identify Loch Ness's 'monster' in the 1930s. The photographs and films that were purportedly shot of Nessie were, at best, inconclusive. There is, however, one famous photograph, taken in 1934 by a London surgeon, Robert K. Wilson, showing a creature with a long neck and a small head placidly skimming the surface of the loch. While many scientists agree that it is an animal, at least one investigator has identified it as a bird.

Investigation of Nessie's existence--or non-existence--began in earnest in the 1960s and has continued ever since. A photograph taken in 1951 by Lachlan Stuart, a Forestry Commission employee, shows three humps appearing on the surface of the turbulent loch. This was hailed as 'positive evidence' by one researcher and a hoax by another. A photograph taken in 1955 by P.A. McNab, a bank manager, reveals a long object or objects travelling near the ruins of Urquhart Castle's tower. The height of the tower--46 feet--conveys an idea of the length of the creature swimming nearby. Many researchers now believe that this photo was, in fact, a fake.

In 1960, Tim Dinsdale, an aeronautical engineer, filmed what appeared to be a creature swimming across the loch. The film was sent to the Joint Air Reconnaissance Intelligence Centre of the Royal Air Force, which concluded that Dinsdale's creature was probably animate and travelling at 10 miles per hour.

Two years, later, the Loch Ness Investigation Bureau (LNIB) was created with the two-fold purpose of researching the possibility of a large unidentified animate creature in Loch Ness and of collecting and substantiating other people's sightings. Over the course of its 10 years of existence, the LNIB amassed a quantity of evidence indicating Nessie's presence in the loch. One of its most famous photographs--taken during a joint project with the Boston Academy of Applied Science, using both sonar and film--revealed what appears to be the hindquarter, flipper and portion of a tail, of a large aquatic animal.

In 1975, several years after the publication of the 'flipper photo', 200 scientists, journalists and Members of Parliament gathered to consider the evidence. Representatives of the Smithsonian Institution, Harvard University's Museum of Comparative Zoology, Toronto's Royal Ontario Museum--in fact almost all scientists present--concurred that a large aquatic animal dwelt in loch Ness. The notable exception was the British Museum (Museum of Natural History) which, though it accepted the authenticity of the photographs presented as evidence, felt that they were insufficient to prove the existence of an aquatic animal.

More recently, in October of 1987, a sonar sweep of the loch was undertaken. Dubbed 'Operation Deepscan', it involved 19 cabin cruisers, which travelled abreast across the loch, setting up a sonar curtain. Any target caught in the sound net was tracked. Although Nessie did not surface during Operation Deepscan, several large targets were recorded, which could not be explained. In fact, one of the contacts tracked was larger than anything recorded before at a similar depth.

It would be difficult to deny that there is something unusual in Loch Ness. There have been too many verifiable sightings, photographs and sonar scans, which support the existence of some sort of animate object. Still, the nagging questions arise: If there is something in loch Ness, what sort of creature is it? How did it get there?

Most verifiable sightings, as well as reliable photographs, seem to agree more or less that Nessie has a long neck, small head, large diamond-shaped flippers, and a powerful tail. Most estimates of her length range from 15 to 50 feet. The most frequently espoused hypothesis is that Nessie is a large marine reptile, possibly a plesiosaur, which supposedly became extinct 70 million years ago. The theory is not as fantastic as it may first appear. A coelacanth, a species of fish once thought to have become extinct 70 million years ago, was caught near Madagascar in 1938.

One explanation for the presence of an unusual creature in Loch Ness is that Nessie--or perhaps several Nessies--might have strayed into the loch at the end of the last Ice Age, 10,000 to 12,000 years ago. Loch Ness was not then land-locked but was an arm of the North Sea. When the ice melted, the land rose, creating an enclosed lake, and possibly cutting off the large aquatic creatures from the open sea.

Clear underwater photos of the loch are nearly impossible due to the presence of peat that is carried into the loch from the rivers and mountain burns. the peat remains suspended in the water, making it murky beyond the top 50 feet. This is why the 'flipper photos' are so significant. It also explains the necessity for using sonar. Another obstacle to positively confirming, or refuting, the monster's existence is the loch's immense size--about 20 to 25 miles long, a mile and a half wide, and at least 700 feet deep (some say 970 feet). Even Operation Deepscan with its cruisers and backup boats covered only 60 per cent of the loch.

Do I believe in Nessie? Well, to be honest, when I first visited the Scottish Highlands and heard the stories of Nessie, I thought the Scots a peculiarly imaginative people to have come up with a prehistoric sea creature dwelling in one of their lochs. Now, I'm not so sure. I've abandoned much of my scepticism. When I return to the Highlands, I too shall station myself at Urquhart Castle with my binoculars and hope for a glimpse of Scotland's best-known denizen of the deep.