Seven UK locations that were used for Game of Thrones? 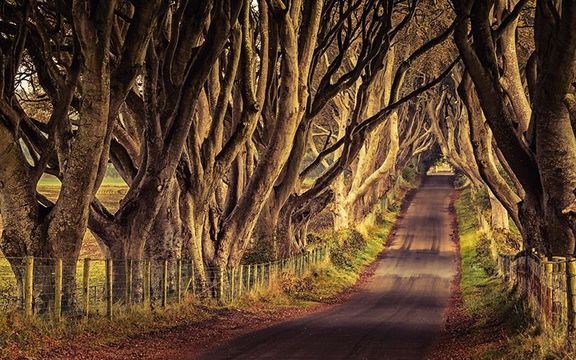 Game of Thrones may be finished, but fans worldwide still flock to the locations used in the show. Here are seven locations throughout the UK that featured in the hit show.

What fans longing to enter the world of Game of Thrones – to stake their claim to Winterfell, walk the shores of the Dornish coast, or explore the Dothraki Grasslands – might not realize is that it’s possible to visit the Seven Kingdoms with only one stamp on your passport, as a great deal of the HBO series is filmed in the UK.

What’s more, the landscape and geography of Northern Ireland also served as an inspiration for George R.R. Martin when he was mapping out his world. He has revealed that Westeros is in fact based on an upside-down map of Britain and Ireland, with major Irish cities sharing their locations with famous Westeros landmarks: King’s Landing as Galway, Donegal Bay as the Sea of Dorne, Belfast as Old Town and Dublin as Casterly Rock.

BOOK: A tour to visit Game of Thrones sites

In honor of the end of 'GOT' Season 8, here are seven wondrous Westeros locations you have to visit.

One of the most iconic settings of Game of Thrones, The King’s Road is the longest road in the Seven Kingdoms, running from the Wall at Castle Black all the way to King’s Landing. The real-life setting of the road is the mysterious Dark Hedges of Gracehill House in Ballymoney, Co. Antrim.

The Stuart family planted the stunning avenue of beech trees in the 1700s as the grand entryway to their estate. They are one of the most frequently photographed attractions in Northern Ireland, and conveniently located right off the beautiful Causeway Coastal Route, just a 20-minute drive from the otherworldly Giants Causeway.

Less than 20 miles from the Dark Hedges, you’ll find yourself in a different part of Westeros entirely! The sandy beaches of Portstewart in Co. Derry is the filming location for the coast of the Dorne, the southern-most kingdom of Westeros, home to the House of Martell and the Sandsnakes. It’s where Jamie Lannister and Bronn set foot on land during their mission to rescue the Princess Myrcella.

Though it’s a sight to behold at any time of the year, Portstewart is, perhaps, best enjoyed in the summer months as it’s a blue flag beach – ideal for swimming, strolling and sunbathing.

While it has appeared as a number of different settings throughout 'Game of Thrones' (the forest where the Stark family discovers the direwolf pups in the first episode; the trees where Ramsay Bolton hunts Theon Greyjoy), Tollymore Forest Park is perhaps most recognizable (and most terrifying!) as The Haunted Forest, where the evil White Walkers begin their long but seemingly unstoppable march to bring winter to the world of men once again.

In reality, Tollymore Forest Park is one of the most beautiful forests in all of Northern Ireland, and only 33 miles south of Belfast. Six hundred acres of ancient redwood trees and crumbling gothic ruins await you.

Northern Ireland manages to contain parts of the kingdom of Essos, too! Unleash your inner khaleesi (queen, for those not familiar with the Dothraki language) in these settings for the Dothraki Sea, home to the nomadic, equestrian-centric society.

The Shillanavogy Valley, in the shadow of Sleamish Mountain in Co. Antrim, is one such setting, as is the majestic Binevenagh Mountain in Co. Derry boasts a mountain walk, a scenic route, and gorgeous views of Lough Foyle.

Sleamish is just a few miles east of the lovely town of Ballymena (hometown of Liam Neeson), and Binevenagh is accessible via the Binevenagh Scenic Route, a quick detour from the Causeway Coastal Route.

This might just be the holy grail for Game of Thrones fans. Castle Ward’s historic farmyard has served as the setting for the exterior scenes of Winterfell, the rightful home of the Stark family, oft usurped by others. The grounds are also where Robb Stark’s army camps.

The 18th-century property – a National Trust site – has fully embraced its modern claim to fame, offering visitors the chance to live a full Game of Thrones experience, dressing up in character and practicing archery in the very spot where Robb, Bran Stark, and Jon Snow do in the series. The castle is a mere 7 miles from Downpatrick, where St. Patrick is believed to be buried at Down Cathedral.

Ballintoy Harbor in Co. Antrim has been used as the location for Pyke, the seat of power of the Iron Islands, the kingdom of the Ironborn that splintered from Westeros. It’s where Theon first meets his sister, Yara Greyjoy.

Ballintoy is a stunning raised beach, connected to the historic village of Ballintoy. There are enticing attractions aplenty nearby, including Northern Ireland’s famous Carrick-a-Rede Rope Bridge, which is less than a 10-minute drive away.

Another gorgeous example of one Northern Ireland location doubling as a Westeros and Essos spot. The beautiful Murlough Bay has been the scene of the Bay of Dragons – formerly known as Slaver’s Bay – and the setting for Renly Baratheon’s camp in the second season of Game of Thrones.

Murlough Bay, a must-see along the Causeway Coastal Route, boasts unparalleled views of Rathlin Island and, on an especially clear day, even the Mull of Kintyre in Scotland.

This article originally appeared on our sister site, IrishCentral, in March 2019.

Read more: Do you want to visit Britain? Let us help