Five Victorian buildings in London you need to visit 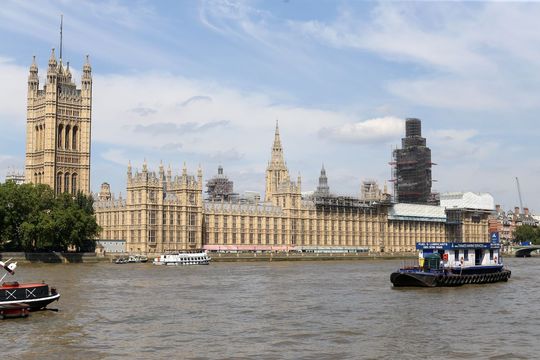 The Palace of Westminster, otherwise known as the Houses of Parliament, is a Victorian architectural icon.RollingNews

Here are five of London's most beautiful Victorian buildings, spanning a moment in time that changed Britain's heritage forever: the reign of Queen Victoria.

She was one of Britain's longest-reigning monarchs and nowhere is the presence of Queen Victoria apparent than in the architecture of London.

Sir John Soane was one of Britain's most influential architects. He represented everything that was magnificent about Georgian architecture and introduced radical designs that made the most of available light - ideal for art galleries and grand assemblies in the days before electricity. Soane died in 1837, the year of Victoria's ascension, but his ideas reached far beyond his lifetime. There is no better place to enjoy Soane's genius than his former townhouse, the Sir John Soane Museum in Lincoln's Inn Fields, just behind Holborn station. 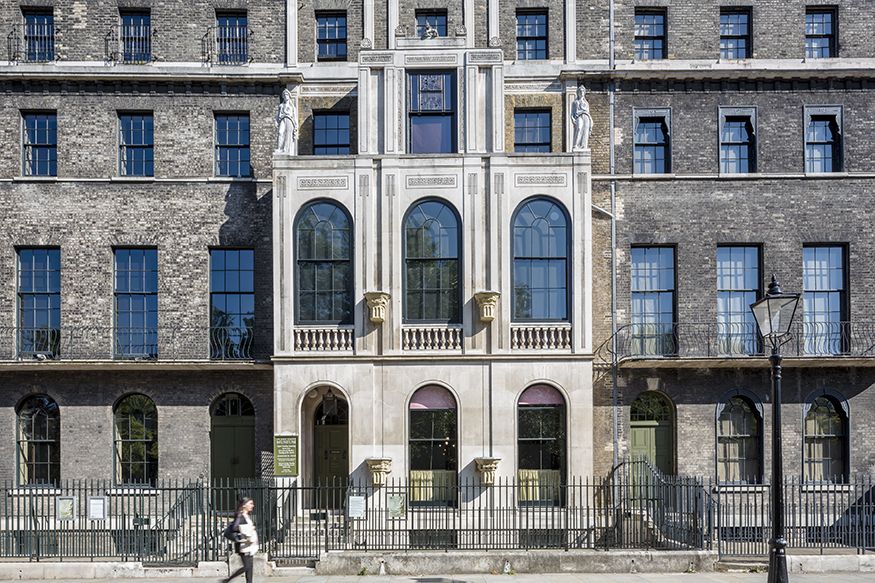 This graceful building with its extraordinary collection of architectural bric-a-brac culled from the great archaeological digs of the world has just reopened after a restoration that seemed to go on forever. It's even more glorious than ever. Formerly lost light-wells have been rediscovered and out-of-bound areas opened up. Nothing is what it seems - ask nicely and a solid wall will be conjured away to reveal a full set of original Hogarth paintings. Another secret panel reveals a tiny quadrangle containing an ancient Roman statue.

Downstairs the gloom-filled “monk's parlor” is filled with curious stone faces and the visitor is encouraged to peer into the massive ancient Egyptian coffin of Pharaoh Seti I. Soane used to fill it with candles for parties, and the museum may still be viewed by candlelight once a month. The room guides are fascinating to talk to. Each has their own favorite tale about the house's many secret wonders. Downstairs, Soane's newly-opened kitchen reveals the oldest patented cooking range in England and several labor-saving devices he installed for his staff.

The Houses of Parliament 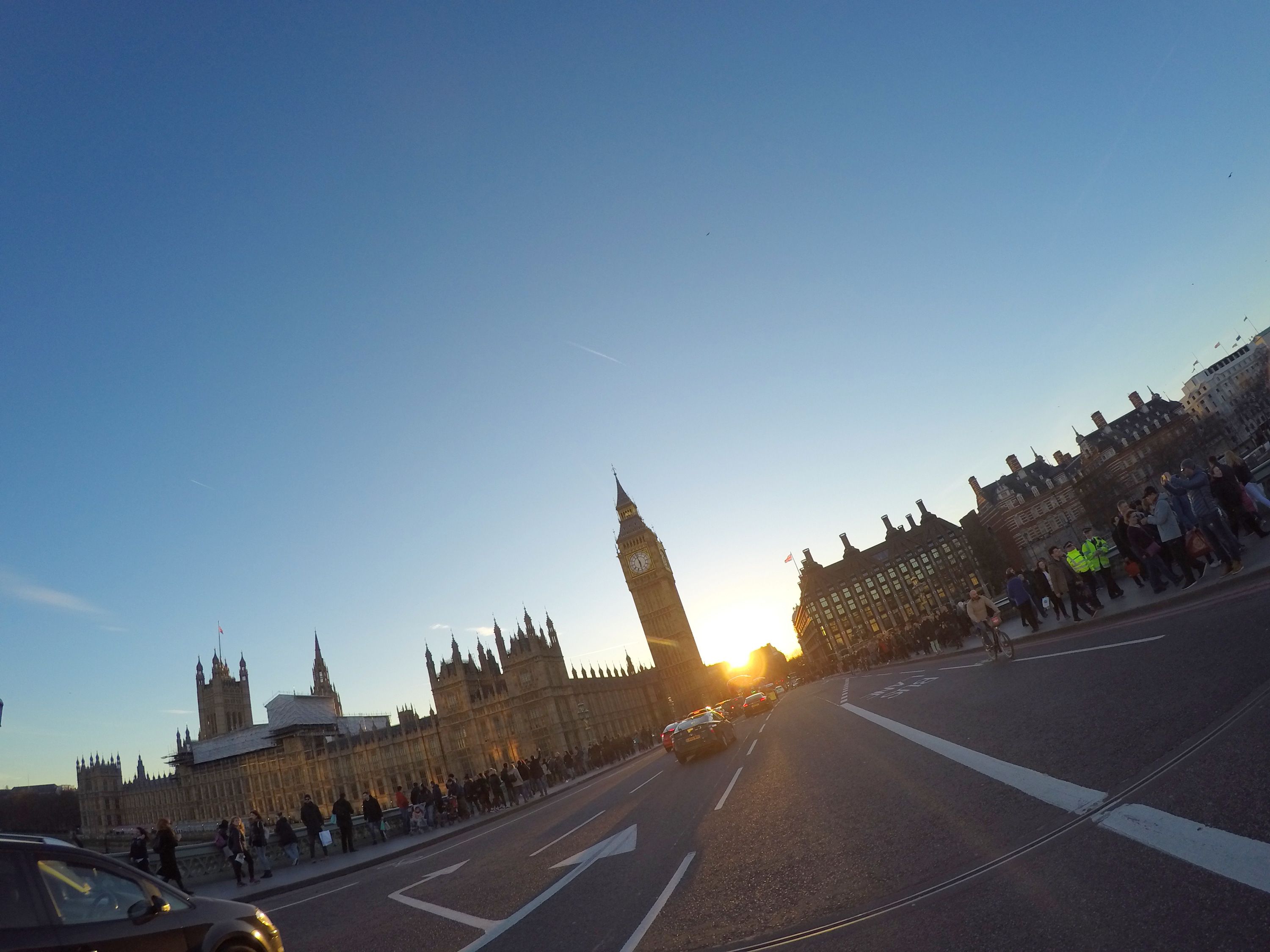 However forward-thinking Soane may have been, by the beginning of Victoria's reign his elegant classical lines were deeply unfashionable. The Queen and her handsome young consort, Prince Albert, were both fans of Sir Walter Scott and the Romantic Movement, and architecture was turning medieval.

Charles Barry's new Palace of Westminster, replacing the Houses of Parliament, burned down in 1834, was rising from the old parliament's ashes, a major, highly-ornamented trailblazer for the Gothic revival. Big Ben, the great bell in Barry's curlicued clock tower, is currently silent while essential repairs are carried out, something certain MPs find very upsetting indeed. Regular Londoners accept the silence as a necessary evil, and most tourists find the tower's intense scaffolding curious enough for a photo in itself.

While the refit continues it's still possible to take a tour of the Houses of Parliament and marvel at the seamless way Barry incorporated the 900-year-old Westminster Hall into his rebuild. Built-in 1097 by King William Rufus II, this magnificent display of power, with its extraordinary hammer-beam roof was specifically saved from the fire at the cost of the rest of the complex. Thanks to 19th-century fire-fighters, we can still see why. 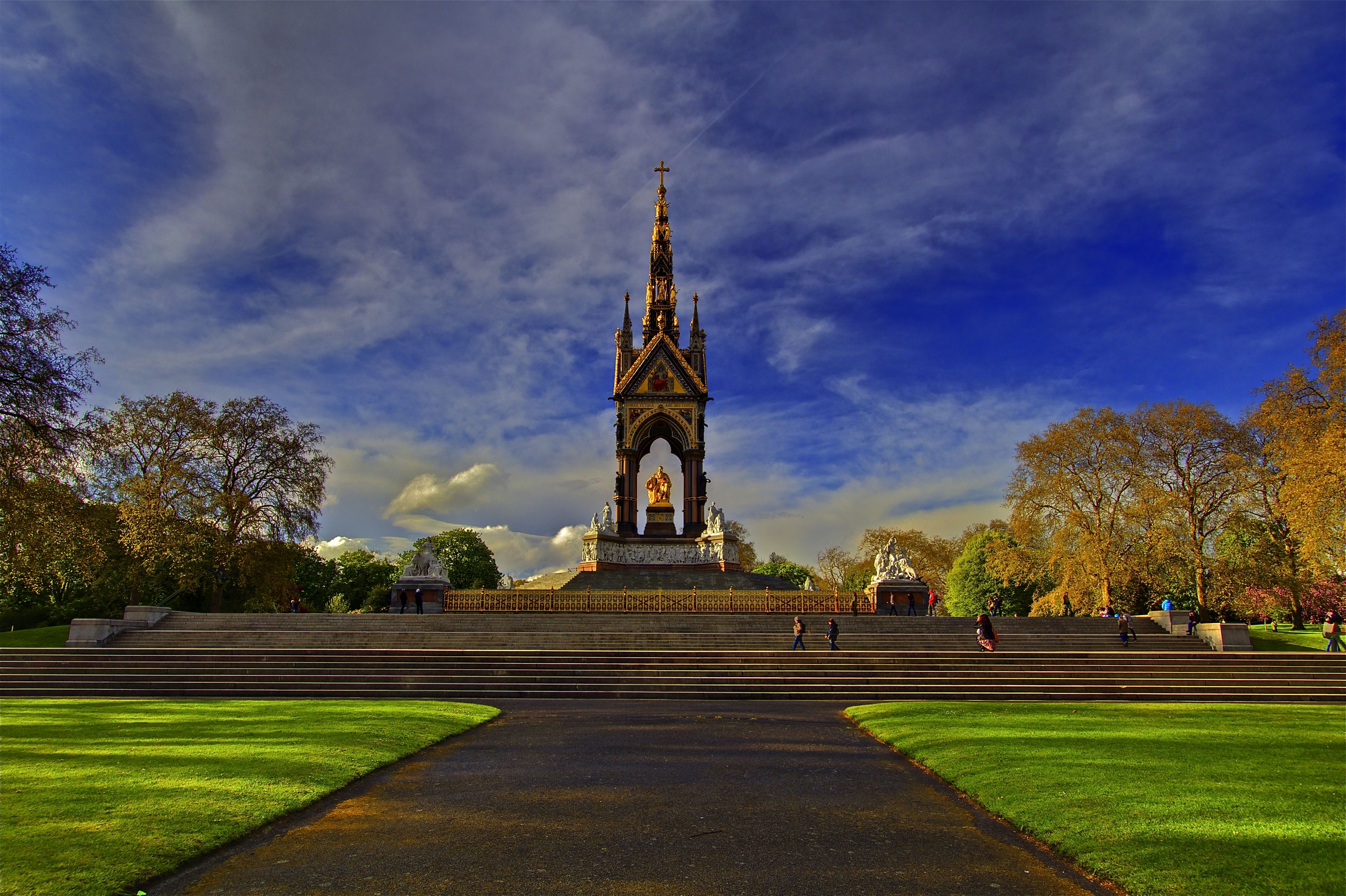 The Albert Memorial isin Kensington Gardens, central London, and it was commissioned by Queen Victoria in memory of her husband, Prince Albert who died in 1861

Prince Albert was crazy for culture, architecture and everything modern. In 1851 his brainchild, The Great Exhibition, showcased everything that represented the fulcrum of contemporary Britain. Sadly, the great glass-house that would become known as the Crystal Palace burned to the ground in 1936, but its gigantic, arched foundations, complete with massive stone steps and attendant sphinxes remain to be seen and enjoyed in Sydenham, south London. There are plans to reopen the exquisite, multi-arched, multicoloured tunnel leading from the train station to the palace; I'll let you know when they do, it will be very well worth experiencing.

Albert had big plans for the money raised by the Great Exhibition. He would build a cultural district in South Kensington. Nothing was left to chance in the design of the Natural History Museum, the Victoria & Albert Museum and the Royal Albert Hall, all superb examples of high Victorian gothic. There was just one problem: Prince Albert died in 1861.

Devastated, Victoria siphoned-off the money previously earmarked for “Albertopolis” to build a gigantic, gilded memorial to her lost love, leaving his cultural babies to flounder in their construction. The Albert Memorial divides opinion. It's certainly impressive, worth witnessing for its sheer symbolism - everything from the exhibition catalog in Albert's hand to the four bearers representing the extent of the British Empire - bellows something about how the Victorian age saw itself. 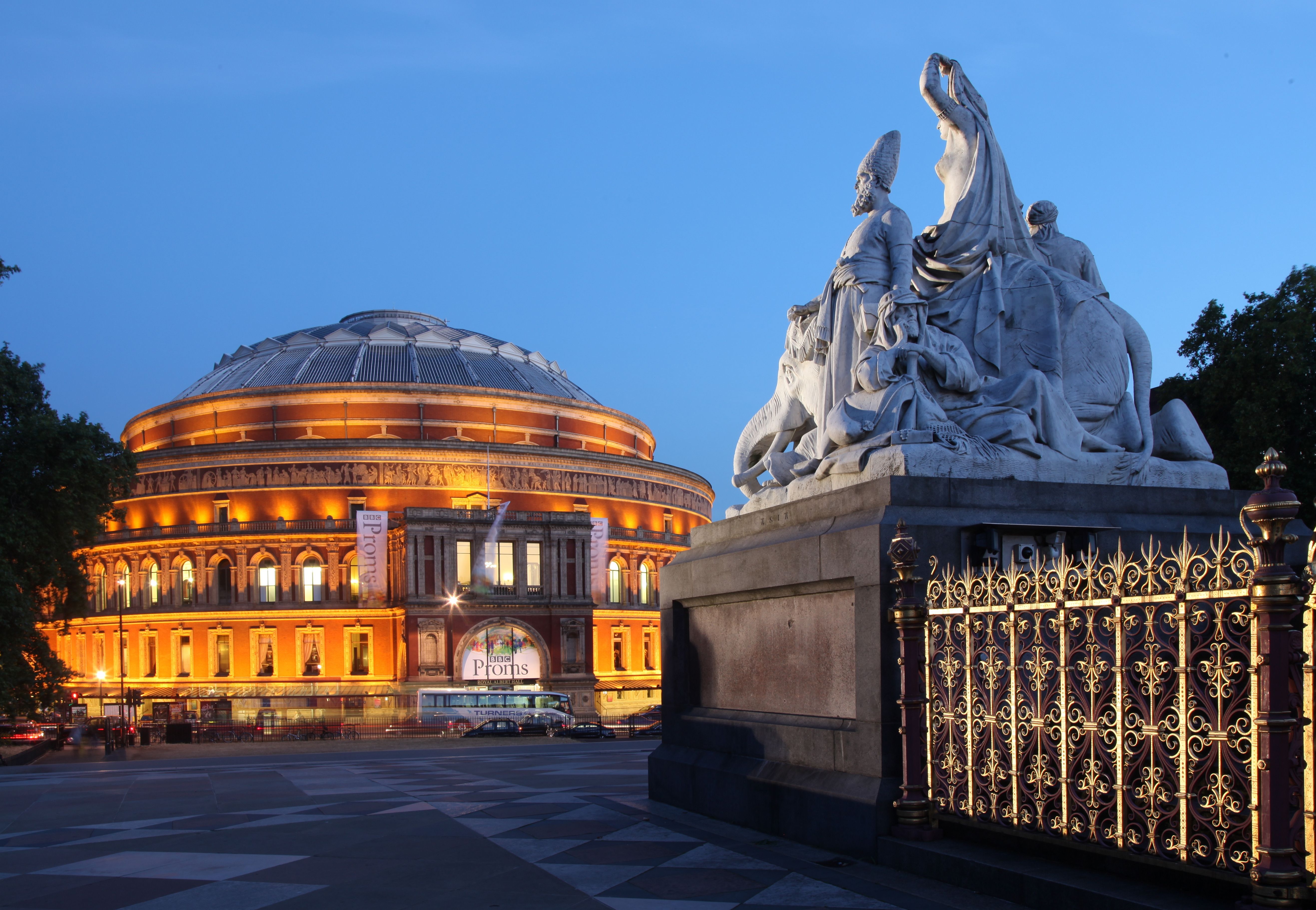 The superb guided tours of the Royal Albert Hall reveal areas of this magnificent, oval concert hall the public usually doesn't get to see. Visitors experience the sumptuous entrances for wealthy folk and get to climb to the Italianate “gods” where 2,000 poorer Victorians would swarm to hear (though not actually see) the music. Thanks to health and safety rules, today the upper gallery, still standing-room, is reduced to a modest 480 and everyone gets a view. For many “prommers” (standing Prom-goers) it's the best ticket in town.

The Royal box is, strangely, not central to the stage. In order to raise the necessary funds after the Queen's cash commandeering, the hall's builders had to sell the boxes. To this day the RAH's boxes remain privately owned (though you can still sit in one, as they are leased back to the theater.) Victoria was outraged at having to buy a box in her own theater and left it so long that all the good ones had gone by the time she finally coughed up. The tour also takes visitors into the Queen's grand private suite, still very much used by Royalty today.

To get a truly regal experience, the Afternoon Tea Tour adds serious luxury. Served upstairs in the Verdi restaurant, the 1871 blend of English Breakfast tea is particularly evocative, but as a notorious glutton, Victoria herself would have preferred the sheer indulgence of the three-tier sandwich-scone-cake selection. It's worth building time into your schedule to fully appreciate the array, especially if you add a cheeky glass of champagne. 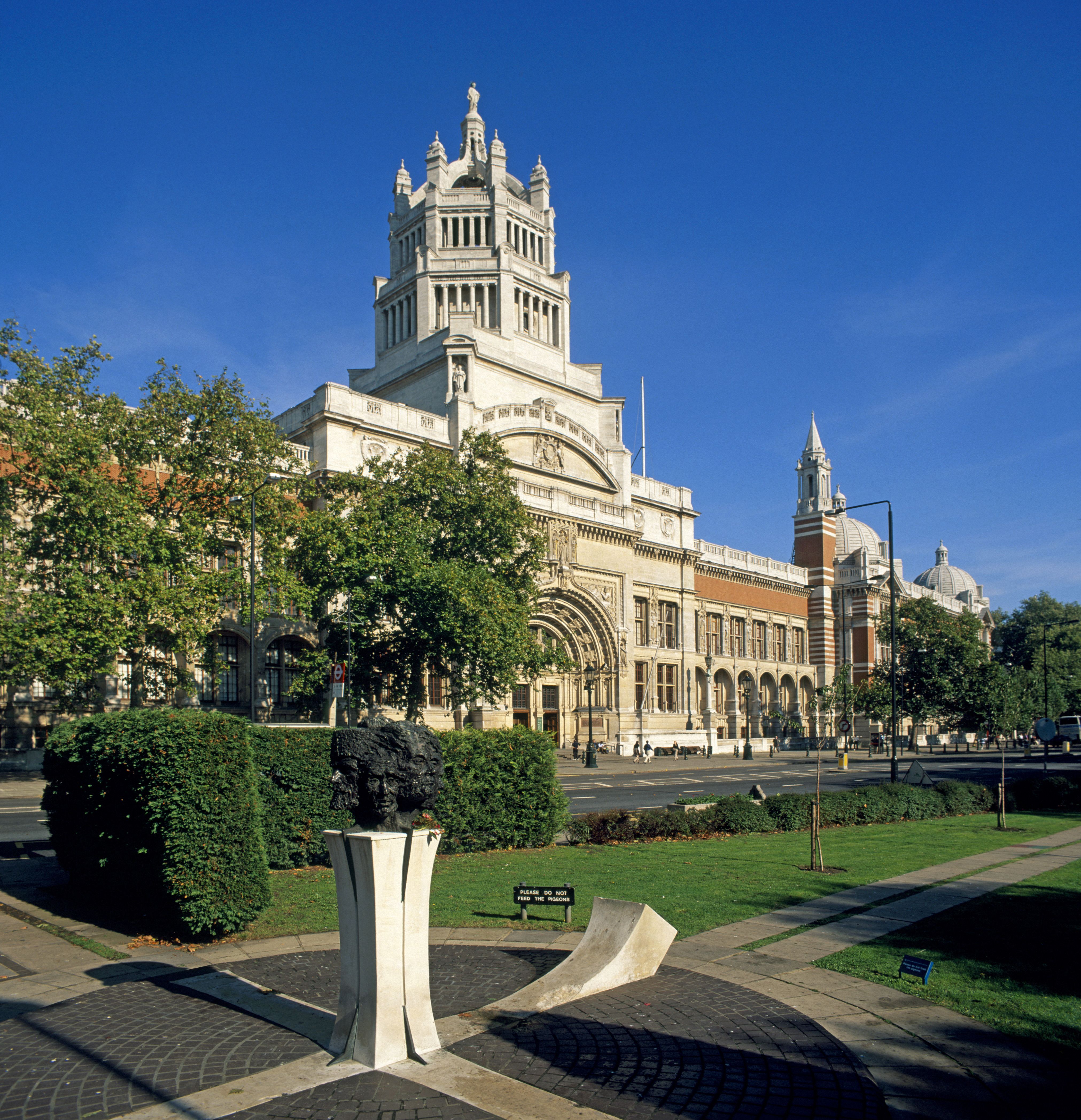 gardens outside Victoria and Albert Museum

Back when they were building what would become the Victoria and Albert Museum, down the road from the Royal Albert Hall, it was only after a glorious plaster “sgraffito” facade was built that they realized they needed somewhere to keep the boilers. The area was cordoned off and, up to a few years ago, housed the museums' garbage bins. A giant stone screen was erected by Aston Webb in 1909 to hide the mess.

Now the V&A uses a different form of heating. In a major development, the museum has removed the industrial detritus and opened the Exhibition Road Quarter as a dazzling new public piazza, encompassing a café and pavilion leading to a vast underground gallery for temporary exhibitions. The Aston Webb screen has been opened up to provide an entrance. If a little brash for some tastes, the courtyard does at least open up new space and allow for even more exhibitions.

To discuss the entire gamut of London's architecture over Victoria's 60-odd year reign would take (and has taken) many books. It's a subject I&aps;ll return to next time, when the arches and trefoils of High Victorian Gothic gently merge into the honest hand-made industry of William Morris's Arts & Crafts movement and beyond, to the graceful swirls of Art Nouveau in the second part of the 19th century.