The weird and wonderful Suffolk Coast 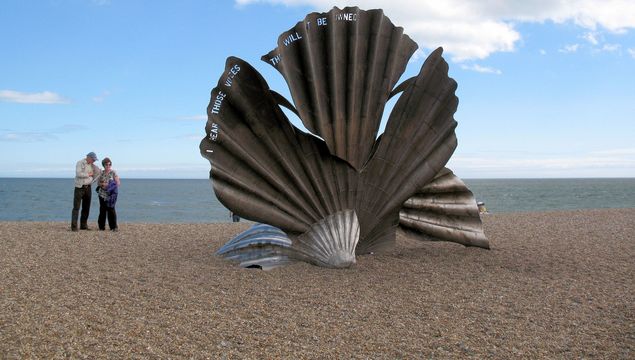 Welcome to the eccentric, exciting, weird and wonderful Suffolk coast.

Things are a bit weird on the Suffolk coast. Consider pretty Thorpeness for example. A few years ago, Bizarre magazine, whose name tells you all need to know about that publication, voted this the Weirdest Village in England.

They are there thanks to Scottish barrister Glencairn Stuart Ogilvie, who bought the land and developed it into a fantasy village where friends and colleagues were invited to spend the summer. Some stayed on, others moved in, and today Ogilvie's somewhat eccentric legacy remains.

At Aldeburgh, a little way down the road from Thorpeness, there is a 14-foot-tall shell on the beach.

It's actually a stainless steel sculpture called The Scallop, by artist Maggi Hambling. Pierced into the edges of the shell are the words, “I hear those voices that will not be drowned,” a reference to the opera Peter Grimes by composer Benjamin Britten, who lived nearby at Snape, and who loved to walk this beach. His music festivals at Snape Maltings Concert Hall began in 1948 and continue today.

A short walk along the coast, past the Moot Hall, a place used for town meetings since the 16th century, stands a house that some say is the smallest in Britain. Or perhaps the smallest in Suffolk. Or maybe merely the smallest in Aldeburgh. Believe who you will, but it is only 8 feet wide, with one room downstairs and one upstairs.

Northwards, then, to Britain's Atlantis. This is Dunwich, on the surface a tranquil village, surrounded by heathland sweeping down to a wide beach. It's what lies beneath the surface that makes Dunwich weird.

Although small today, Dunwich was once one of England's most prosperous centers, a major port, similar in size to medieval London.

That was until storms battered the coast in the 13th and 14th centuries, eventually submerging the best part of the city beneath the North Sea. Today, about a mile from land, no more than 50 feet below the waves, lies a community of houses, churches, hospitals, monasteries and even a mint.

Legend has it that, on quiet nights, the bells of the churches in the lost city of Dunwich can be heard ringing under the water. But Britain's Atlantis is more than a legend. It's real, and a visit to Dunwich Museum reveals a model of the lost city, artifacts, and images that bring the story to life.

To get from Dunwich to the next major coastal town, it's necessary to dogleg inland for a bit. It's beautiful countryside all the way, and at journey's end, you come to Southwold. This delightful English seaside resort boasts one of the smallest cinemas in England, a wealth of galleries exhibiting the work of local artists and a lighthouse situated in the midst of residential homes. But the town is especially famous for its beach huts. 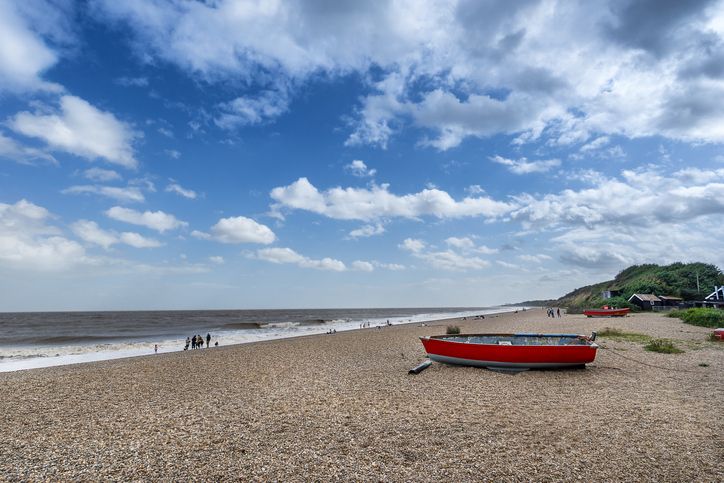 Dunwich beach in the english county of Suffolk

The American writer Paul Theroux, in his book The Kingdom By The Sea, in which he travelled the coast of Britain, found them referred to by the British as “shallies,” an Anglicised version of the French chalet.

The word translates as country cottage, rather a grand term for what is, in essence, a shed about 8 feet wide, 12 feet deep, and a little over 7 feet to the ridge of the sloping roof. Inside, furnishings usually comprise a chair or two, a closet, maybe a cooker and even a bed. It is not, however, permitted for owners to sleep there overnight.

The beach huts of Southwold are special for the way their proud owners paint them in a rainbow of colors. Despite their small size, one recently went on the market for £100,000—more than the cost of a small house in many parts of the country.

Before leaving Southwold, take a look at the Under the Pier Show, which is on, not under, the pier. It consists of what appears to be a collection of weird vintage slot machines, but that are actually the wonderfully eccentric creations of local engineer and cartoonist Tim Hunkin.

Across the River Blyth, lies Walberswick, a small community of shops, galleries, tearooms, and pubs, reached by ferry from Southwold. Be aware that this ferry is no more than a rowing boat, with a rower expertly navigating—not to say valiantly fighting—a strong current to get passengers from one shore to the other. 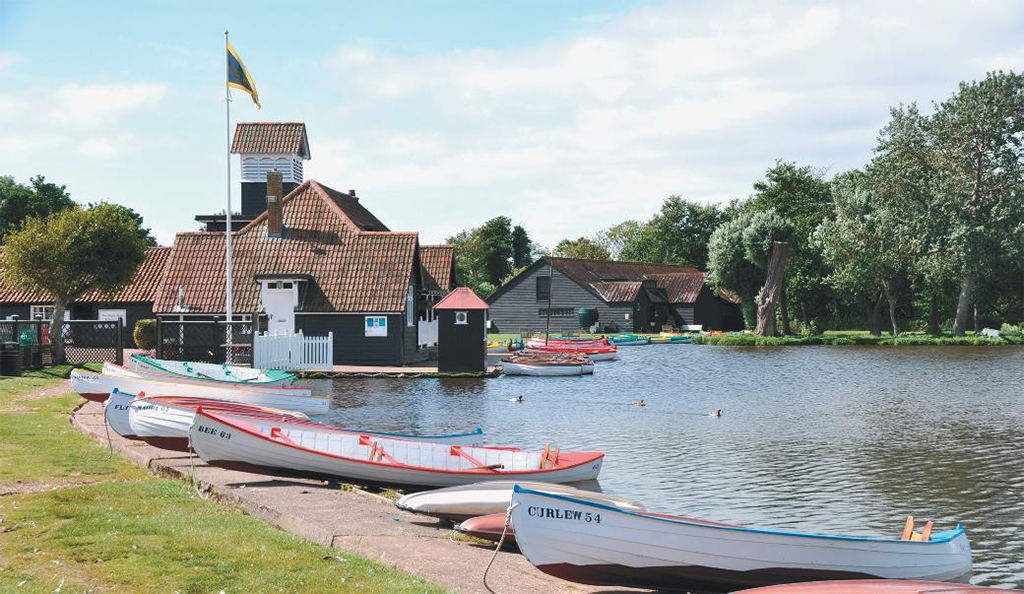 The old malthouse at Snape has become an arcade of shops and cafes, and home to the Aldeburgh Festival

Snape Maltings: Arts complex, antique shops and concert hall on the banks of the River Alde, near Aldeburgh.
www.snapemaltings.co.uk
Adnams Brewery: Take a tour and a beer tasting experience to learn how traditional English beer is brewed.
www.adnams.co.uk
Blythburgh Church: Magnificent 15th-century church, open to visitors every day, often referred to as The Cathedral of the Marshes.
www.holytrinityblythburgh.org.uk
Lighthouses: Find them all along the Suffolk coast at Lowestoft, Southwold, Orford Ness, and Felixstowe.
www.simplonpc.co.uk/Lighthouses 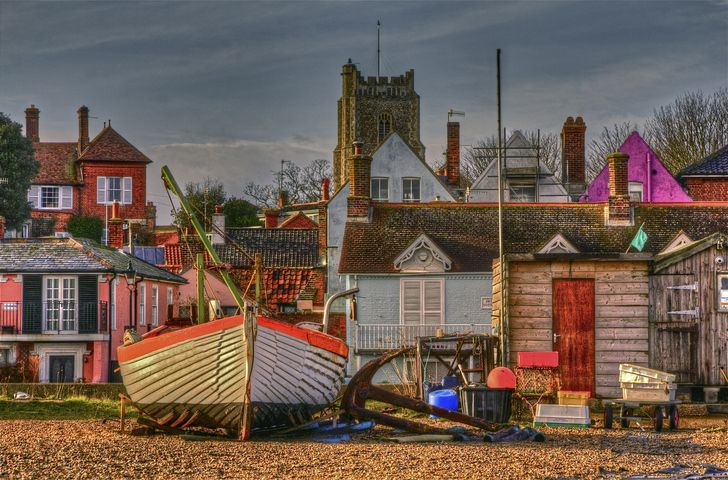 Aldeburgh is a coastal town in Suffolk, UK. The town is notable for its shingle beach and fisherman huts where freshly caught fish are sold daily.

The House in the Clouds:
www.houseintheclouds.co.uk
Baytree House: Restored Victorian hotel, close to the town and beach. www.baytreehouselowestoft.co.uk
Blythe Hotel: Edwardian building, stylishly restored, and family-run. www.suffolkhotelsguide.com
At the end of the High Street, just past the lighthouse, lies Belle Vue Park—and confirmation that Lowestoft has not escaped the Suffolk coast weirdness factor. Close to a thatched lodge at the entrance to the park, you'll find the Witches' Stones. They say around these parts that at the first stroke of midnight by the town hall clock the stones dash down to the sea for a dip, and are back in position again by the last stroke. Now that is weird!