How wool built the Cotswolds 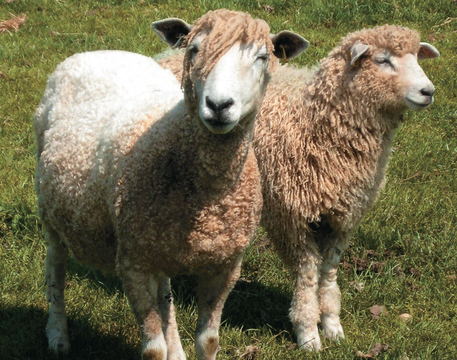 Most visitors coming to Britain prepare themselves for rain. Just over 2,000 years ago, the invading Roman army prepared by bringing their own supplies of wool—on the backs of sheep.

When the Romans reached the area known as the Cotswolds, in the southwest of England, they found a region of stunning natural beauty—and months of chilly weather. To keep them warm, they brought sheep to raise for wool, a seemingly small event that would transform the Cotswolds forever.

The Cotswolds today is the largest designated Area of Outstanding Natural Beauty in England and Wales, best known for their rolling hills, distinctive thatched limestone cottages and honey-colored villages and market towns. It is sheep, however—and their fine wool—that defined the region’s way of life for 2,000 years. Even the name Cotswolds is thought to be derived from sheep. “Cots” means sheep enclosure and “wolds” are the gentle hills.

When the Romans withdrew from Britain, the flocks passed into the hands of local landowners— first the church and then local families. Sheep were put out to graze, fleeces were traded and fortunes were made. The wool, from a million medieval sheep on the Cotswolds, was extremely high-quality and profitable European export. Italian merchants, in particular, clamored to buy wool from the Cotswolds. By early medieval times, it was said: “half the wealth of England rides on the back of a sheep.” 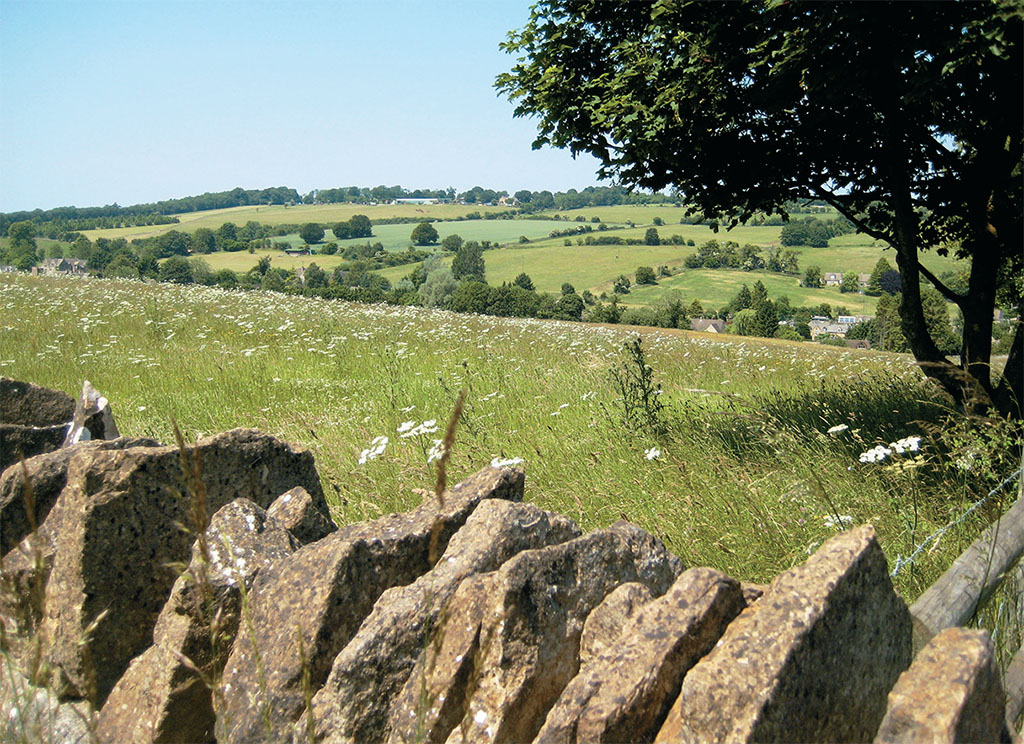 The Romans discovered that the gentle hills, valleys and streams of the Cotswold Hills proved an ideal habitat for the raising of sheep for wool. The industry still thrives today.

Strolling today through villages such as Stow on the Wold, Chipping Campden, and Burford, you walk streets designed to handle sheep. Imagine Stow on the Wold on a medieval market day. Instead of Holly Cottage Antiques or the Cotswold Bakery, you would find 20,000 sheep heading toward the Market Square, counted as they emerged from a network of alleyways known as “tures” that controlled the flocks coming into town. 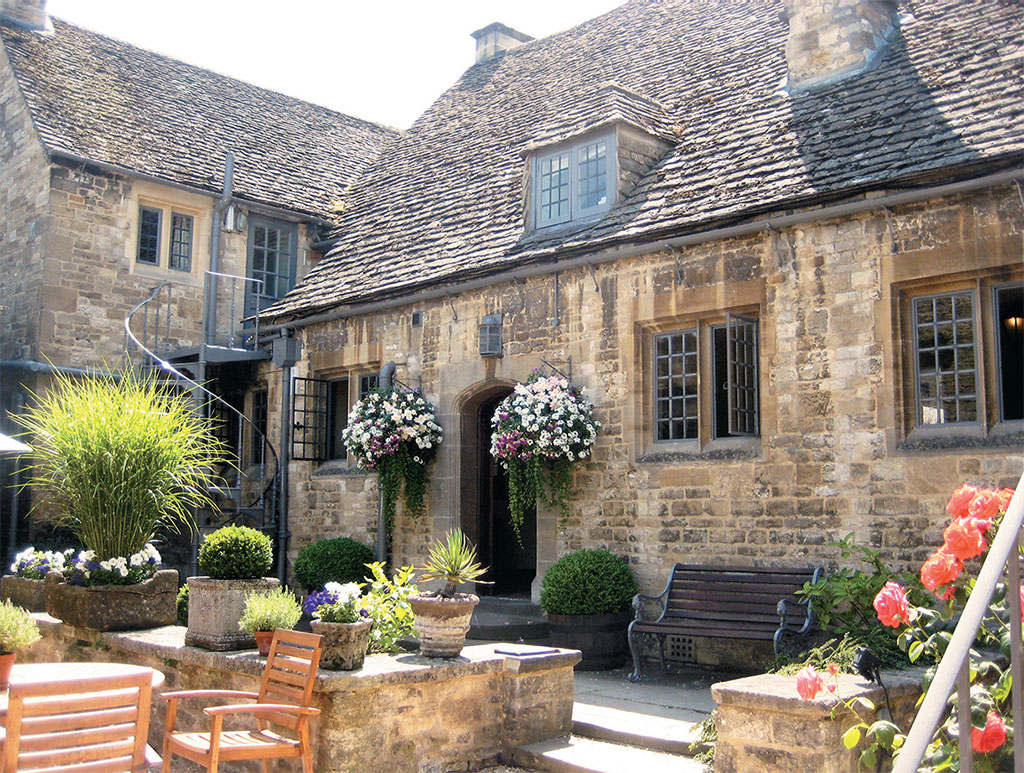 Enjoy the sunshine or a meal in the quiet courtyard of The Lamb Inn in Burford. The region’s market towns and villages almost all have a great small local hotel or two.

Over in Burford, sheep were held on the large grass verges, wide grassy areas beside the road. Now the verges remain as well-tended lawns in front of gable-fronted medieval houses, with wooden benches under an arch of trees stretching down to the High Street. Whatever towns feature on your itinerary, you will surely spot a Shepherd’s Lane and a Woolley Road, and you’re never far from a Sheep Street.

The most sought-after Cotswolds sheep was known as the Cotswold Lion, with a shaggy mane of tightly curled fleece. Traders sometimes enhanced the creamy color by adding yellow ochre powder, yet this sheep offered a golden fleece in more ways than one.

“The fleeces were really traded like a precious metal,” says Alastair Blant, deputy manager at the Cotswold Farm Park, near the village of Guiting Power. “The sheep were shorn before they went to market, as the fleece was so valuable, leaving just a topknot or forelock of curls as a ‘sample.’”
At the Cotswold Farm Park you come face to face with some of the few remaining Cotswold Lions as well as other rare livestock breeds. Take your place on the hay bales to watch the shearing demonstrations in early summer. These days, a sack of the golden fleece can be yours for just £12.

As you are driving through small leafy lanes into Chipping Campden the 120-foot tower of St. James Church is visible for many miles. Like others at Northleach and Cirencester, the church contains brasses set into the floor—the identifying woolmarks put onto the merchants’ woolsacks. St. James has one of the largest brasses in Gloucestershire, depicting William Grevel and his wife. Flamboyant Grevel House, built in the 14th century with gargoyles and such, also proclaimed Grevel’s wealth and status. Across the street sits the Woolstaplers Hall, meeting place of the wool merchants.

At another grand wool church, St. John the Baptist, Cirencester, the huge front porch has recently been cleaned. The newly burnished, bright butter-yellow stone must have appeared striking to the locals then as it does now. Inside, its spacious light interior is reminiscent of a small cathedral, with a beautiful, painted “wine glass” pulpit.

Just around the corner is Cirencester’s Corinium Museum, the name for one of Roman Britain’s most important towns. Well-preserved mosaic floors and walls from local Roman villas are displayed to great effect, along with evidence of spinning and weaving the precious wool.
Eventually, local commerce began to weave the wool rather than simply raising the fleece. Trade guilds developed, weaving, and manufacturing high-quality goods for export. Cotswold cloth was even more sought after than Cotswold wool had been.

“By the 18th century, every gentleman in Europe wore a coat made of West of England cavalry twill,” said Richard Martin, an expert on the local wool trade and owner of Cotswolds Woollen Weavers in the tiny village of Filkins. The story of local weavers, their lives, and their cloth is told with an eclectic mix of looms, weaving artifacts, and photographs in rambling 18th-century buildings. The company still weaves the original high-quality Cotswold cloth, carrying on a local tradition. Beneath the low wooden beams of their store, everything from a woolen trilby hat to a picnic rug is made from Cotswold cloth, carrying a swing tag bearing an old Cotswold poem:

‘In Cotswolds glory days of old,
Good weavers at their looms did sing,
‘While cloth is King, And Sheep is Lion,
Those clothed in wool shall enter Zion.’

The weavers carried out their trade-in cottages with low ceilings, twisting staircases and stone-flagged floors. Many remain the heart of Cotswold villages today. The Lamb Inn in Burford is a maze of staircases. It started as several smaller weavers’ cottages, now brought together in an award-winning hotel. Other hotels housed wealthy wool merchants. And after a busy day in the Cotswolds, try a refreshing link back to its heritage with a pint of Cotswold Lion or Golden Fleece real ale.

The shift from wool to weaving meant moving the craft to the region’s steeper hills and valleys swift-moving stream provided power for mills and for dyeing the cloth. The valleys around the town of Stroud once supported 125 mills.

“Stroud Scarlet” was one of the most prized and expensive clothes, a “Redcoat” color of the British army in the 18th century. The rich green of Monte Carlo casino tables comes from Stroud, as does the yellow cloth that covers tennis balls at Wimbledon. 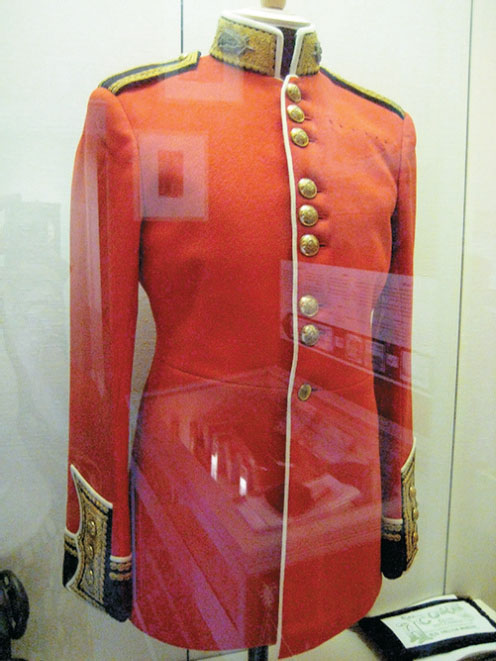 Stroud Scarlet was the sturdy wool cloth that made the Redcoats.

The Museum in the Park in Stroud is housed in a wool merchant’s house and set in a charming woodland park at the edge of the town. In its grand hall hangs a 17th-century painting of 20-foot lengths of scarlet cloth drying in the fields. The cloth was suspended tent-style and watched by weavers nervous about rain or theft. From this practice, we get the expression “being on tenterhooks”—nervously waiting for news of an event.

The weaving trade in the Cotswolds started to decline with the industrial revolution in the north of England. Victorian steam power triumphed over water power from the Cotswold Hills. Some merchants diversified into silk production, notably in the pretty village of Blockley, but the area remained predominantly rural, untouched by any large-scale industry. 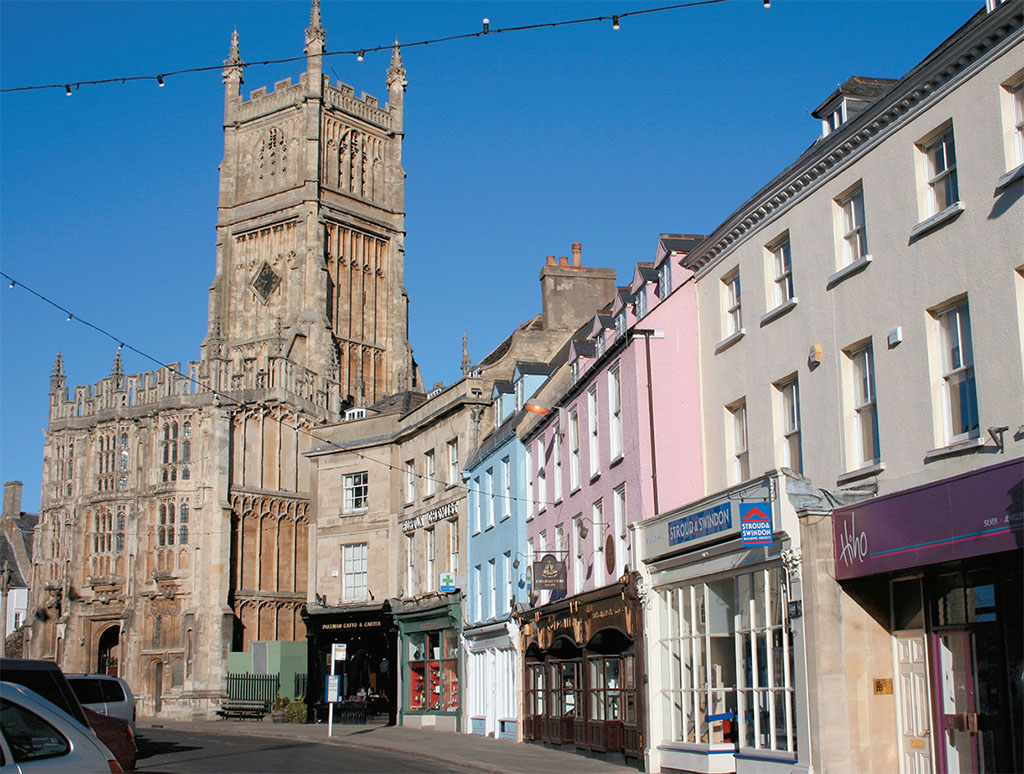 The Church of St. John the Baptist, often called the Cathedral of the Cotwolds, is one of the grandest of the Cotswold “wool churches” and dominates Cirencester’s town center.

For today’s visitor, the legacy of shivering Roman soldiers, and the ups and downs of the trade that followed is etched into the beauty of the landscape. Villages are still a jumble of weavers’ cottages and markets are still held regularly in ancient marketplaces in the center of a maze of streets designed for hooves as well as feet.

SLEEPING AND EATING IN THE COTSWOLDS

The Cotswolds has a large range of high-quality, award-winning hotels, both in the market towns and in the countryside. Here are a few charming smalltown options.

The Fleece Hotel Market Place, Cirencester
A great central location in Cirencester and for the Cotswolds. Part of the market square has been an inn for many centuries, once hiding fugitive Charles II. A popular pub and restaurant as well as having 28 rooms. Friendly staff and excellent local food.
www.thefleececirencester.co.uk

The Lygon Arms High Street, Broadway
A luxury hotel in the pretty village of Broadway. Built in the 16th century, it offers traditional four-poster rooms and an oak-paneled dining room as well as more modern facilities: spa, swimming pool, and of course, croquet. Afternoon tea recommended for non-residents.
www.pumahotels.co.uk

The Lamb Inn Sheep Street, Burford
Originally a row of weavers’ cottages dating back to the 15th century, this mall but the beautiful country hotel has comfortable lounges, traditional bars with welcoming fireplaces, and a large courtyard garden. Just two minutes’ walk from Burford High Street, also ideal for lunch inside or out.
www.cotswold-inns-hotels.co.uk