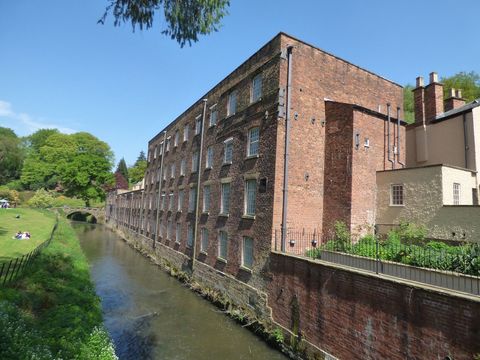 Explore the hard lives of workers and families of Georgian England at the Quarry Bank Mill's, Apprentice House, in Wilmslow.

Our favorite images of England are the rustic, rural and the picturesque, where nature appears to advantage and humans live happily in harmony with the natural world. The images of early 19th-century Romanticism and the unshakable optimism of Victorian England color our expectations of Britain today.

“And did the Countenance Divine Shine forth upon our clouded hills? And was Jerusalem builded here Among these Dark Satanic mills?”
—William Blake

Jerusalem, of course, was the idyll of the romantic. But what if those dark, satanic mills weren’t so bad? What if they, in fact, were the new Jerusalem?

Oh, life was grim enough in the textile mills and mill towns that grew up across the West Midlands and the North with the Industrial Revolution in the late 18th and 19th centuries. Looking back from our sanitary and efficient 21st-century perspective, life was dirty, hard, dangerous and just plain depressing. Working hours in the mills were long—six days a week. Health and safety were not exactly up to present standards. Living conditions in many places were unsanitary and even deadly. Diet was limited and “disposable income” a rarity.

It’s hard to believe that for the workers and their families of Georgian England, however, the mills meant a way of life far superior to that available to agricultural laborers, crofters and the subsistence farming of the time. After all, in the mill villages, there was a sense of community and medical care in extremis. There was an opportunity for some schooling for children, the security of a steady cash income (however meager by contemporary standards), a chapel or church and opportunity for things.

South of Manchester, and quite near Manchester Airport, Quarry Bank Mill in Styal offers perhaps the best “working model” available of what life in the textile mill communities might have been like.

Samuel Greg was one of an “enlightened” group of mill owners and saw his mill workers as people, not simply as engines of labor. He built Quarry Bank Mill on the River Bollin in 1784. The original iron water wheel powered five floors of cotton textile production, from ginning to weaving, for 120 years. Then, steam power took over.

A mill needs workers, however, and the nearby hamlet of Styal didn’t have the workers or the housing. So, Greg built the village that still thrives today—converted farm buildings to houses and built terraces of mill worker cottages. Though Unitarian himself, Greg also provided a Methodist chapel for his workers.

The Apprentice House, just up the lane from the mill, housed child “apprentices,” indentured to work in the mill. Greg acquired orphans about age 9 from workhouses and from Manchester. Yes, he got free labor, at hours we would not want to work. Greg contracted a doctor for their care; they received regular schooling, and each worked in the large garden adjacent that provided fresh fruit and vegetables to their diet. They were looked after, and life was much better than in the workhouse. At its height, the Apprentice House could accommodate up to 90 children. It was closed in 1847.

Until 1841, one-third of the mill workers were children below age 13. Like adult workers, they put in 13-hour days six days a week and attended church on Sundays. Yet, many apprentices stayed on to work at Quarry Bank as adults. Where would they find a better life elsewhere? The mill also offered an old hand opportunity for advancement. One apprentice ended up as a general manager.

It is easy to look back from our contemporary vantage point and conclude what dismal lives common folk led back 200 years ago. In fact, places like Quarry Bank Mill and Titus Salt’s Saltaire represented progress and advancement for its laborers and their families. Decade by decade, living and working conditions continued to improve through the Victorian era. Amazingly enough, life in Styal would have been surprisingly optimistic.

Quarry Bank Mill is one of the great National Trust visits. The five floors of the red brick Georgian mill are all open, and alive with the noise of machinery and the lint of cotton in the air. Skilled machinists demonstrate every aspect of the mill’s operation. Clear, readable display boards walk the visitor through the textile production from bales of the raw material coming into Liverpool to finished goods shipped out.

This is perhaps the best comprehensive visit illustrating the hugely important textile industry to the economic engine of British wealth and empire in the 19th century. Quarry Bank Mill remained in the Greg family for generations. It was Samuel Greg’s great-great-grandson who gave the mill and estates to the National Trust in 1939.

Visits to the Apprentice House are by tour on a timed ticket. Make arrangements when you arrive at the NT admission office. The garden and orchard surrounding the house are open to wander. Potatoes and beans, apples and pears: The apprentices tended the garden.
Adjacent to the mill, Quarry Bank House Garden illustrates how the Greg family lived—or at least how it gardened. The garden is gorgeous, of course, in season, but unless you’re going to spend all day at Quarry Bank, it is something you can pass.

Styal village is about a 20-minute walk from the Mill Yard. It’s easy enough, however, to drive over to, and there is plenty of parking available. The cottages themselves are private homes, but you can freely stroll about the neighborhood and get a feel for life in the mill community.
As a visit, Quarry Bank offers the advantage of being open throughout the year from 10:30 a.m., Wednesday to Sunday in the off-season, seven days a week from March through October. A full calendar of special activities throughout the year can be accessed at nationaltrust.org.uk.