A Day to Visit Berwick-upon-Tweed 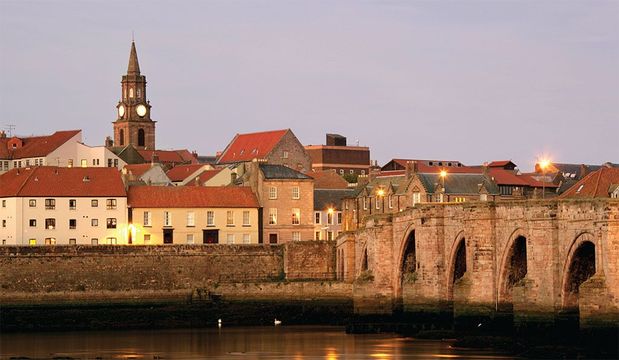 Have you ever visited Berwick-upon-Tweed?

Why go to Berwick?

The borough of Berwick-upon-Tweed lies a few miles inside the English border with Scotland, and changed hands between the two countries at least 13 times between 1296 and 1482, when it finally became an English town. Even then, the ownership question wasn’t settled, as it was considered an “independent borough, neither English nor Scottish,” until 1836. As late as 1855, a history of Northumberland described Berwick as “not considered to belong to either country, but to be a neutral town in the Kingdom of Great Britain.”

Even now, Berwick has a bit of an identity crisis. It is a borough, rather than the Scots burgh; its soccer team plays in the Scottish Football League; the local banks include branches of the Scottish Banks; and it has a mayor rather than a provost.

The most complete example of an early fortified border town, Berwick is an outstanding attraction on its own, but its position as the most northerly English town also makes it an excellent center for touring Northumberland as well as the Tweed Valley and the Scottish Border abbeys and towns.

How to get to Berwick

Berwick is on the main east coast rail line between London and Edinburgh and most trains stop here. There is also an hourly train service from Edinburgh and Newcastle. www.nationalrail.co.uk
By road, Berwick lies just off the A1, 57 miles south of Edinburgh and 63 miles north of Newcastle, both of which have airports. Motoring from either of the two cities takes approximately one hour.

The Queen’s Head Hotel boasts en-suite accommodation and quality dining, with much of its produce grown locally. www.queensheadberwick.co.uk
The Elizabethan Town House, situated literally in the shadow of the town wall, offers superb B&B facilities and an English breakfast to set you up for that walk around the fortifications. www.elizabethan-town-house.co.uk

How to spend the morning

The best way to get a feel for Berwick and its history is to take a walk. It takes about an hour to walk around the town’s famous defensive walls. These fortifications replaced the wall built on the orders of Edward II in the early 1300s to keep out the invading Scots.
Little remains of the 14th-century fortifications, but the replacement walls, built in the 1550s during the reign of Elizabeth I, are the most complete example left today. Constructed according to an Italian design, they were state-of-the-art for the period, incorporating ditches and bastions to give fire cover to every part of the wall.

Other surviving features include a bell tower, built in 1577, to warn of approaching enemy forces, and Lord’s Mount, a two-story gun tower with six heavy guns erected in 1542 on the orders of Henry VIII. Only the ruins of the gun tower’s ground floor remains.
Given its precarious position on the English-Scottish border, Berwick also needed a castle, but the Elizabethan wall made it largely redundant and the Victorians built the railway station on the site; only the White Wall and a flight of steps known as the “Breakneck Stairs” survive. 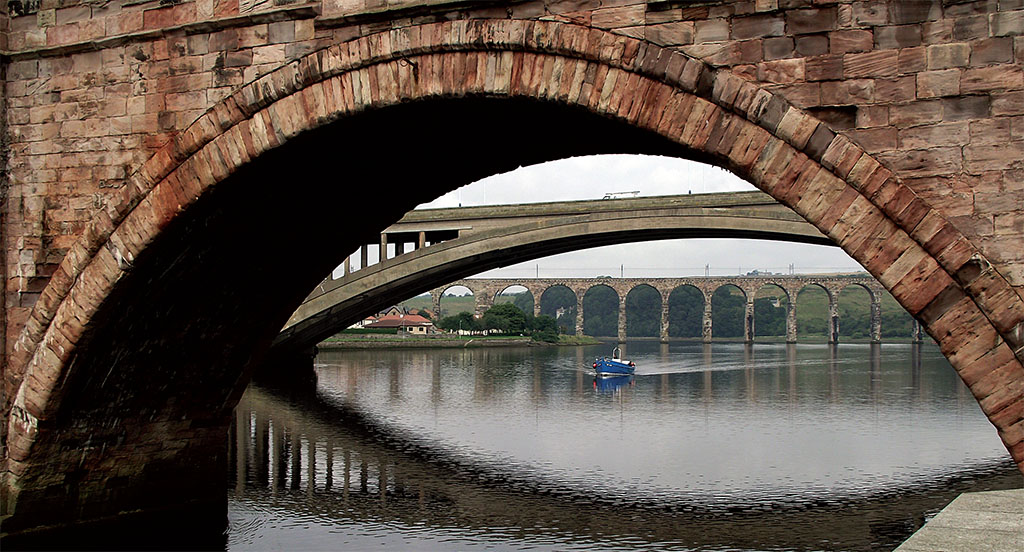 Berwick’s other great feature is its bridges. The Old or Berwick Bridge, completed in 1643 and still used today, was built by King James VI of Scotland (James I of England following the Union of the Crowns in 1603) to join his two kingdoms, while the “modern” (1928) Royal Tweed Bridge carried the old A1 road.
The Railway Border Bridge, a magnificent viaduct of 28 arches, was designed by engineer Robert Stephenson and opened by Queen Victoria in 1850. It still carries the east coast mainline rail service. Whether you travel by road or rail, you will likely cross at least one of Berwick’s bridges. 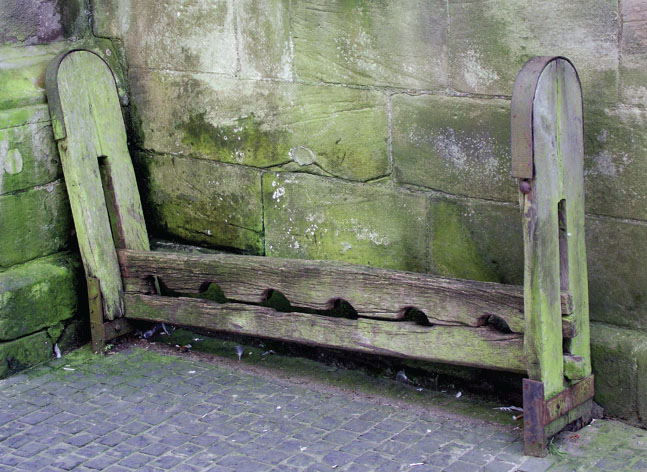 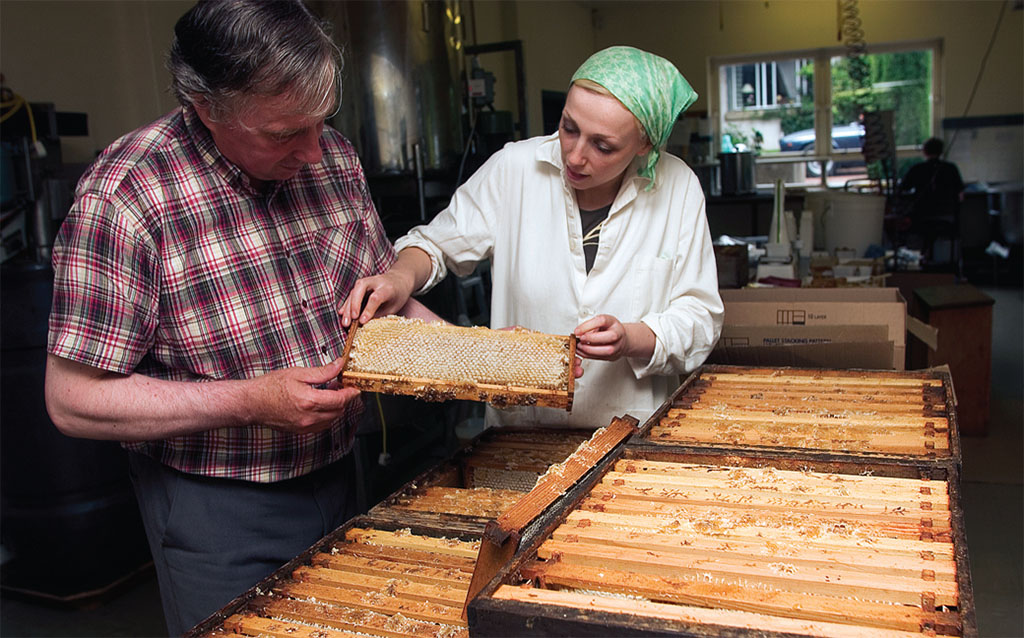 Where to get lunch

The Amaryllis Restaurant in West Street has a menu with a range of options suitable for all tastes.

The Liquid Lounge in Bridge Street serves up excellent fare.

What to shop for

The local candy, Berwick cockles, is a must for anyone with a sweet tooth.

What else to see

The striking building that dominates Berwick’s main street, Mary-gate, is the Town or Guild Hall, built in the 1750s. It contains the old gaol and is open to the public. The word “striking” is particularly appropriate. Unusual for a town hall, the building is capped by a spire and bells that ring out the curfew each night at 8 p.m.

Beside the town hall sit the town stocks. A common form of punishment from the 14th century, they were used for the public humiliation of minor offenders. Today’s incarnation are a replica of the originals.

Dating from 1717, Berwick Barracks was among the first in England to be purpose built. It served as a barracks for more than 200 years—home to the local regiment, the King’s Own Scottish Borderers, from 1881 until 1964.

Now operated by English Heritage, the Barracks portrays the life of the British soldier from the middle of the 17th century to the beginning of World War I. It also hosts the Borderer’s regimental museum and the Borough museum. www.english-heritage.org.uk
If you are looking for something a little different, then the Chain Bridge Honey Farm, just a few miles away on the road to Cold-stream, may be of interest. With exhibits covering all aspects of beekeeping and honey production, the farm is informative for youngsters and adults alike. www.chainbridgehoney.co.uk

The farm takes its name from the Union Chain Bridge, which is just a five-minute walk away. Built in 1820, the bridge is the oldest surviving iron suspension bridge in Europe. It spans the River Tweed, marking the border. If you walk or drive across, you are going from England into Scotland.

Where to get dinner

Most of the establishments mentioned offer fine dining and The Meadow House, a traditional English pub just a few miles outside the town, offers home-cooked food made from local produce whenever possible. www.meadow-house.co.uk

How to spend the evening

The Maltings Theatre & Cinema has an extensive program of entertainment with theater, music, comedy and movies on offer.www.maltingsberwick.co.uk

The borough’s “neutral” status caused all sorts of difficulty, and Berwick was often referred to separately in 19th-century diplomatic documents. So when Great Britain declared war on Russia in 1853, legend has it that the declaration was signed by Victoria as “Queen of Great Britain, Ireland, Berwick-upon-Tweed and the British Dominions beyond the sea.” When the Crimean War ended, however, Berwick was not specifically mentioned in the ensuing peace treaty —leaving the town apparently still at war with Russia.

A Russian diplomat visited the town in 1966 and a “peace treaty” was signed. The mayor of the time told his visitor, “You can tell the Russian people that they can now sleep peacefully in their beds.”

In fact, Berwick’s apparent omission had been corrected by legislation, so the story is simply a folk tale, but a fascinating one for that.