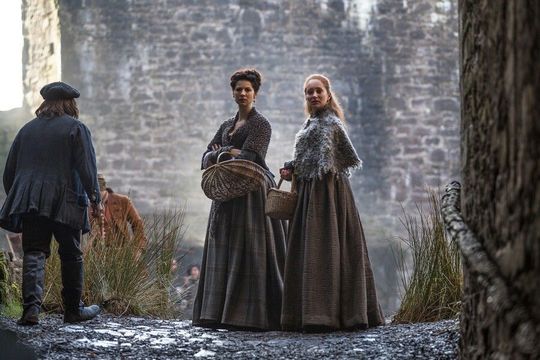 A still from the smash-hit show, Outlander, on Starz.Starz still

Dr. Tony Pollard, historical advisor to the smash-hit period drama Outlander tells British Heritage Travel how his role works and how he keeps this TV show on the heritage straight and narrow.

Outlander is a historical drama, based on the novel series of the same name by Diana Gabaldon. The Starz show stars Caitriona Balfe as Claire Randall, a married former World War II nurse who, in 1946, finds herself transported back to Scotland, in 1743. There she encounters the dashing Highland warrior Jamie Fraser (Sam Heughan) and becomes embroiled in the Jacobite risings.

Here Dr. Tony Pollard, a professor of conflict history and archaeology at the University of Glasgow, in Scotland, tells all about his role as a historical advisor on Outlander.

BHT: How would you describe your work on the show?

Dr. Tony Pollard: I read all of the scripts at an early stage and provide comments on issues related to the accuracy, sometimes offering alternative scenarios if there’s a more authentic way of illustrating something.

In my day job, I am an archaeologist and historian based at the University of Glasgow. I specialize in conflict and the Jacobite Wars are one of my specialties. I am also a novelist and I think my experience in writing historical fiction appealed to the producers as it meant I understood the relationship between history and fiction and could work with the compromises that come with the territory.

BHT: A lot of our readers would love to be historical consultants. How does one get that gig?

TP: Well, being a university lecturer, I would say get a degree. But I know lots of people that write books on history that have come from other backgrounds. I think the key is to develop an interest in a specific period and learn all you can about it. Primary sources are vital, so get to know archives and how they work. Writing is a good way in.

BHT: What’s the hardest part to get right about 1700s Scotland? The thing most people don't usually consider?

TP: I think it's breaking down the popular misconception that the Jacobite Wars, and in this case the ’45, was a straightforward battle between Scotland and England and that all Jacobites were Catholics (in the ’45 most were Episcopalian). As ever with history, the reality is a lot more complicated and the edges are blurred. The Jacobite wars were in many ways Scottish civil wars and wars between the Highlands and Lowlands. There obviously was an England versus Scotland element, and some historians regard the Jacobites as a nationalist movement, but this is only a part of the story (Bonnie Prince Charlie might have had more success if had played the nationalist card more strongly).

BHT: Politically, how involved was France in the Jacobite rebellion?

TP: This relates to the previous question as there has been a tendency to view the ’45 as an isolated event. In reality, it was part of the War of Austrian Succession which was being fought in Europe among several nations, but of most importance here was the conflict between France and Britain (it was the British army that fought at Culloden and not a Hanoverian army – another popular misconception). The French had long been friends of the exiled Stuarts, it was a good way of getting at the British establishment. The Jacobites could also be useful, especially if they could open a second front in Scotland, which would drain British military resources from the continent, and there were some serious attempts to assist them with this. In 1708 the French sent a fleet to Scotland, carrying with it James Stuart, ‘the Old Pretender’ and father of Bonnie Prince Charlie, and 6000 French troops. The plan was for this invasion force to be supported by Jacobites in Scotland. However, the fleet was intercepted by the Royal Navy off the coast of Fife and chased away. There was second French invasion in support of the Jacobites planned for 1745 but this was wrecked by a storm before it set sail.

The French were supportive when it suited them. After disaster befell the fleet in early 1745, there was little enthusiasm for another all-out attempt, particularly as they were doing quite well against the British in the war on the continent. The Duke of Cumberland, who was to command the British army at Culloden, was badly defeated at the Battle of Fontenoy in May 1745 and the French made various gains after this. Certainly, the Jacobite Rising in Scotland did help but French support was limited to sending over weapons, money, and some Scots and Irish troops in French service. Prince Charles promised his men a French invasion but it never came.

BHT: Can you tell us about the importance of Culloden? How the battle changed the clan system?

TP: Culloden was a terrible defeat for the Jacobites militarily but it needn’t have been the end of the campaign. Many Jacobites wanted to fight on but Charles had had enough. There followed a period of terrible reprisals across the Highlands, which in a way fed into old clan rivalries. The power of the clans was definitely reduced – previously clan chiefs had acted as potentates dishing out justice and calling out their followers to war. With the confiscation of estates and the disarming act of 1746, the clans were partially emasculated and though many no doubt hoped for another crack of the whip there would never be another rising. Many Jacobites were drawn into the British army and Highland regiments proved very effective in the wars in America and elsewhere in the growing British empire. Industrialization and changes in the economy saw people moving away from the Highlands, with the notorious clearances being a part of this process, which was not entirely down to Culloden but part of a more general process of change.

BHT: How much research goes into making sure all the little touches on the show are just right?

TP: I spend most of my time looking at the scripts, but I have visited the studio and spoken to the costume designers and seen the built sets. I had a good chat with the armorer about swords. When I pointed out that the British army’s infantry at Culloden was not carrying the swords that were normal for the time, he was delighted as it saved him money!

BHT: Was representing that battle difficult?

TP: Presenting a battle on screen is always a challenge, and there have been several attempts to portray Culloden, most notably in the groundbreaking Peter Watkins film from 1964. I was pleased with the way the Outlander script dealt with the battle, but I don’t want to give too much away here, so I’ll just leave it at that.

Dr. Tony Pollard is an archaeologist specializing in the archaeology of conflict. He is Director of the Centre for Battlefield Archaeology at Glasgow University, the co-presenter of the BBC series Two Men in a Trench and co-founder of the Journal of Conflict Archaeology. Outlander airs Saturdays at 9/8c on Starz. Go here for more on Dr. Tony Pollard, or visit his Twitter.