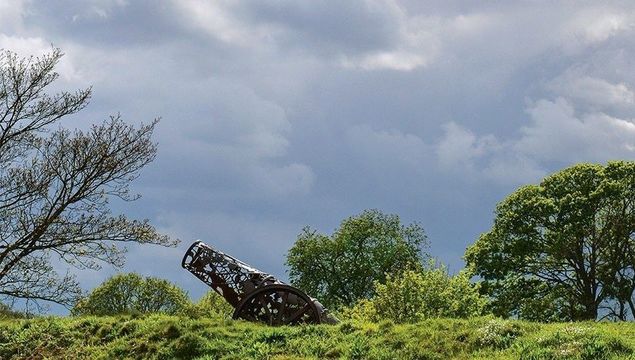 Parliamentarians and Royalists finally have their story told at the National Civil War Centre.

Both politically and geographically, the English Civil War (1642-51) shaped the country we know today. Nine years of fighting followed by a Commonwealth government meant no English monarchy could ever regain the absolute power rulers once enjoyed. The Divine Right of Kings had been severed with the head of Charles I, and the rest of the world took note.

Hundreds of American colonists remembered their ticket to the New World was not one-way and returned to fight, mainly for the Parliamentarians. They may have regretted their choice at the Restoration when, contrary to promises, the new King Charles II’s spies chased the Puritans back across the Atlantic, but the values both sides had fought for lingered long in the soul. 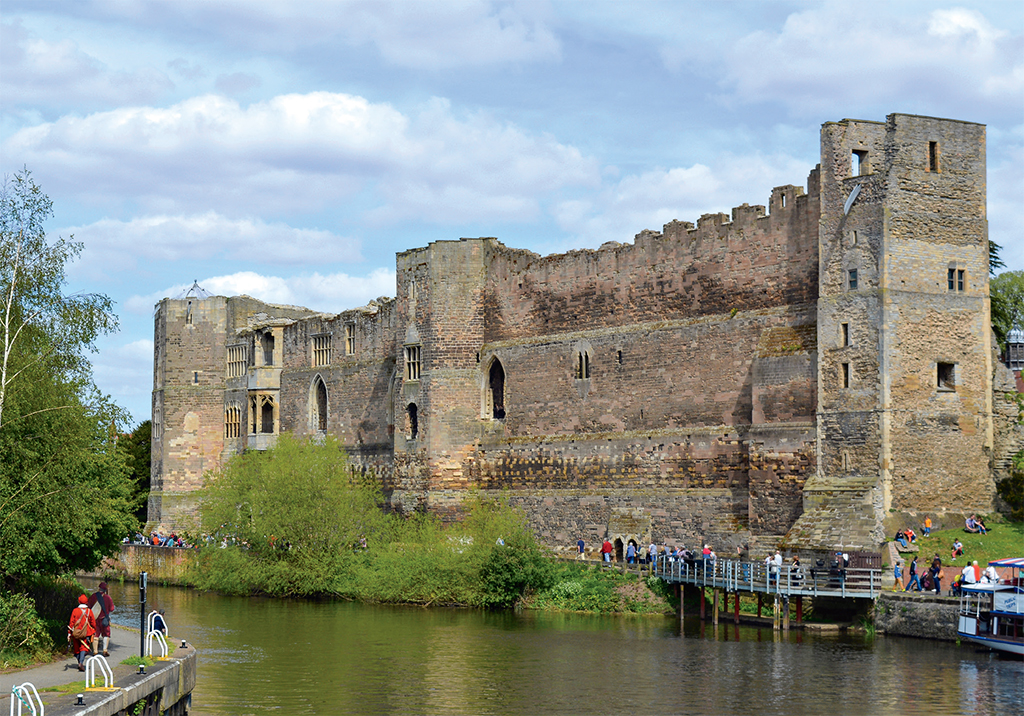 From the River Trent, the intact curtain wall of Newark Castle belies the castle’s destruction in the Civil War. PAUL LINDUS

England itself changed, as the demolition job begun by Henry VIII with the monasteries and religious institutions was finished in the secular world by Oliver Cromwell, determined to prevent future rebellion. Castles, walled towns, and fortified houses were systematically razed to the ground and the land reshaped to new world order.

The Midlands saw some of the fiercest fighting, not least because they were geographically right in the middle. Strategically important, on the cross of the Great North Road and the Fosse Way, Newark suffered three separate sieges between 1642 and 1646. The town has never forgotten the months of deprivation, the devastating loss of life, or the humiliating sting of defeat. Defiant even after receiving orders from the captured king to surrender, the mayor declared it was better to “Trust in God and sally forth.” It’s still the town’s motto. Newark was the obvious choice for England’s first museum dedicated to telling the story from bloody start to bloodier finish.

Read more: The Battle of Edgehill & The Start of the Civil War

The artifacts are given room to breathe. There is minimal text on the wall with optional “digging deeper” information paddles, where visitors can read more if they choose. The almost-obligatory armor-and-musket displays are supplemented by fascinating items showing how ordinary life continued as best it could. From what folk ate and drank to what it was like to billet soldiers in your home, diamond-shaped coins minted during the siege to valuables buried by terrified people that never returned for them, a fearful, claustrophobic existence is evoked in displays, artifacts and hands-on experience designed to appeal beyond the usual battlefield buffs.

There is something deeply personal about standing in front of the near-complete last outfit worn by 26-year-old John Hussey and noting the hole blasted through the armored breastplate matches the one in the buff coat underneath, both gifts from the musket ball with his name on it. He took four days to die.

Another buff coat (thick leather jerkin) belonged to Colonel Francis Hacker, the man who walked the king to his execution, albeit with courtesy and respect. On the Restoration, the kindness he had shown Charles at the block was repaid. Hacker got off lightly: merely hanged, spared the drawing and quartering reserved for the other regicides.

Colonel Hacker is one of a handful of individuals from all aspects of the war whose stories have been chosen for a series of broadcast-quality, five-minute films within the exhibition. These mini-documentaries are a genuine must-see. I have never been moved to tears by a museum video before. 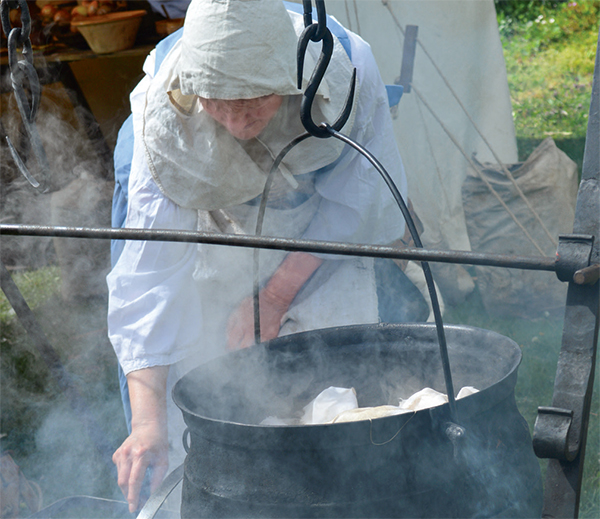 So, just how did they keep those white clothes clean? SANDRA LAWRENCE

Although the main items remain on permanent display, the center is keeping much of its powder dry for the moment, bringing out ammunition from its vast armory of stored objects with changing exhibitions focusing on different aspects of the war. The next exhibition, on Civil War medicine, with precision bone-saws, instruments for removing musket balls and a self-propelled wheelchair will show the ingenuity spawned by necessity—even if the shocking, hand-shaped branding iron for deserters demonstrates a different kind of creativity.

Museum shops don’t usually merit mention, but this one goes above and beyond the call of duty. No tourist tat here. From traditional slipware pottery in authentic 17th-century designs through horn drinking vessels to bread baked to Civil War recipes, everything has been specially produced or sourced. You can even choose sides via your real ale. A nice Cavalier Golden Ale, perhaps? Maybe a Roundhead Bitter? Or a good old Puritan Stout? Each comes with its own feather for your cap. The center opened with a vast, 900-soul-strong reenactment of the taking of Newark. Over two days visitors experienced the terror of standing inside bombarded battlements, while the deafening cannon fire shook the very walls. The sight of exhausted Cavaliers lowering the red flag of defence and marching their surrender to Parliamentarians impressed by the dignity of their enemies was oddly moving, and it looks to become a regular event. www.nationalcivilwarcentre.com 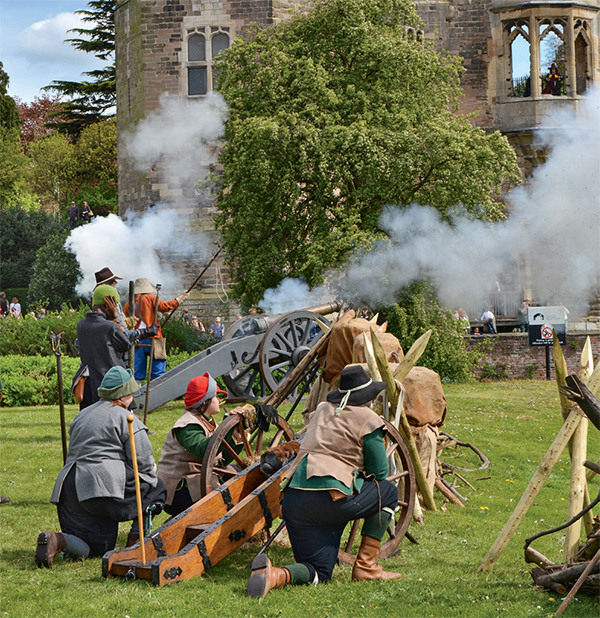 Just as in the 17th century, laying siege to Newark Castle proved so popular that it looks to become a regular event. PAUL LINDUS

FOLLOW THE HISTORY FURTHER in Newark on the new National Civil War Trail. Download an app that allows you to point your mobile device at plaques around town to see more of those excellent short films, each pertaining to the site where you’re standing. They are stunning, but not for everyone, due to the amount of memory you need to download the data. For those traveling without smartphones, the trail is available as a free map.

Newark is compact. The castle is a five-minute walk from the railway station and the marketplace with most of the historic buildings nearby. The black and white, half-timbered Governor’s House is now a bakery and the glorious panels of the Old White Hart a few doors away house a building society, but both have been immaculately restored. The Old White Hart still boasts a little row of pastel-shaded figurines along its walls.

Down the road, the Prince Rupert, built in 1452, was originally a merchant’s house, but had been an alehouse known as the Woolpack for 60 years when war broke out. It was used as billeting for soldiers, and a door in the cellar indicates a now-lost underground tunnel to the castle. Today the Prince Rupert, named for the king’s wayward nephew, is a cozy, rambling hostelry that manages to be both bright and snug, serving decent pub-grub, real ale and bonhomie.

The Charles I Coffee House should, by rights, be the Queen Henrietta Maria Coffee House. Charles’ loyal queen dined there during a long visit to the town. It’s in the shadow of handsome St. Mary Magdalene church, whose spire, the highest in Nottinghamshire, still has a visible hole under one window where it was hit by a musket ball. 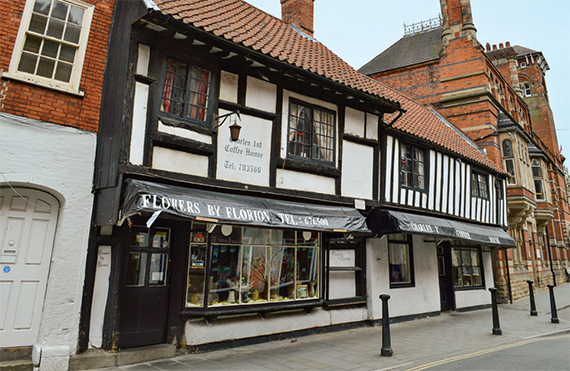 The King Charles I coffee shop should be named for his wife. SANDRA LAWRENCE

Cromwell ordered Newark’s citizens to demolish the castle, now a striking shell. It is, however, far more complete than, say, Nottingham’s razed fortress. After months of siege, the exhausted town was further ravaged, this time by bubonic plague. Townsfolk were too sick to wield sledgehammers and no outlying villager was going anywhere near a plague town. Much of the great wall still stands proud, albeit dented by cannonballs and blackened by gunpowder.

The new trail only covers Newark, but the Civil War laughed at boundaries. Southwell is an absolute must on any visit to the area. The graceful Minster town is best known today as the birthplace of the Bramley apple. Southwell is, however, a key place to experience history up close and very personal. It’s possible to sleep in the very room where King Charles I spent his last night as a free man. The ancient, half-timbered Kings Arms was already 500 years old, and Charles the 10th monarch to sleep there. He had met with Scottish commissioners in the room downstairs and believed he had finally secured sanctuary.

The following morning, however, the Scots betrayed the king, handing him over to the Parliamentarians for a massive ransom.
The inn was renamed The Saracen’s Head after the sword that, allegedly, executed the king. If the bedroom is unoccupied and you ask nicely, you may be able to see the extremely rare Elizabethan wall painting Charles would have stared at that final night, only discovered in 1986 when whitewash was removed for a planned refurbishment. www.saracensheadhotel.com

The ruined Archbishops Palace, where the doomed Cardinal Wolsey spent his last summer before avoiding execution by Henry VIII by dying on his way back to London, is particularly beautiful. Soft, lush gardens and sweet sounds from the chorister school form a stark contrast with the grand state chamber upstairs where Charles was taken on his capture. www.archbishopspalacesouthwell.org.uk

Southwell Minster itself is both grand and somehow homely, and a walk around the surrounding streets yields sumptuous Georgian architecture that belies the town’s troubled past. www.southwellminster.org

The classic children’s history book 1066 And All That boils the English Civil War down to two sides: Right but Rotten, Wrong but Romantic. It’s a neat idea but does nothing to unpack reality. Three hundred and seventy years ago, brother fought brother in a fundamental clash of ideologies. The Civil War Trail poses a question—which side would you have chosen?

Parliamentarians destroyed all but the vast labyrinth of cellars in the cliff below the original medieval castle. The present Ducal Mansion was built shortly after the restoration but gutted by fire in 1831 by rioting residents. It is now the city’s museum. www.nottinghamcastle.org.uk

Used as a base to recruit soldiers for both sides of the war, Ye Olde Salutation was briefly known as the Soldier and Citizen during the Commonwealth. Before its rebuild in 1240, the original alehouse was known as The Archangel Gabriel Salutes the Virgin Mary. www.salutationpub.com