Whatever happened to the beers of Burton?

For more than two centuries, “Burton” meant “beer” in the United Kingdom just like “Hollywood” meant “movies” in the United States. So what happened?

Burton accounted for a quarter of all beer production in the UK, including some of the country’s largest and best-known brands, and its innovations in the brewing industry, imitated worldwide, carried the names “Burtonization” and the “Burton Union System.” Then, suddenly, it stopped. The surprise was akin to the Hollywood studios being bought out by European television stations and moved to Iowa. It was unimaginable—yet it had happened.

Properly named Burton upon Trent, Burton is a small industrial city in the West Midlands with an area population (including adjacent suburbs) of about 60,000. It was never much bigger than that even in its heyday. Like nearby Derby, it’s fairly far removed from the motorway system, and the motorway’s nearest junctions are unmarked as you zip between Manchester and Birmingham. Its small size and out-of-the-way location might make one wonder how it ever became prominent in the first place.

Emma Gilleland, Marston’s Head Brewer, has no doubts: “It’s the water.” Marston’s, the world’s largest producer of cask ale, is the only remaining major brewer of traditional English beer in Burton—in effect the winner of the Last Man Standing match that once included Bass, Worthington, and Ind Coope. 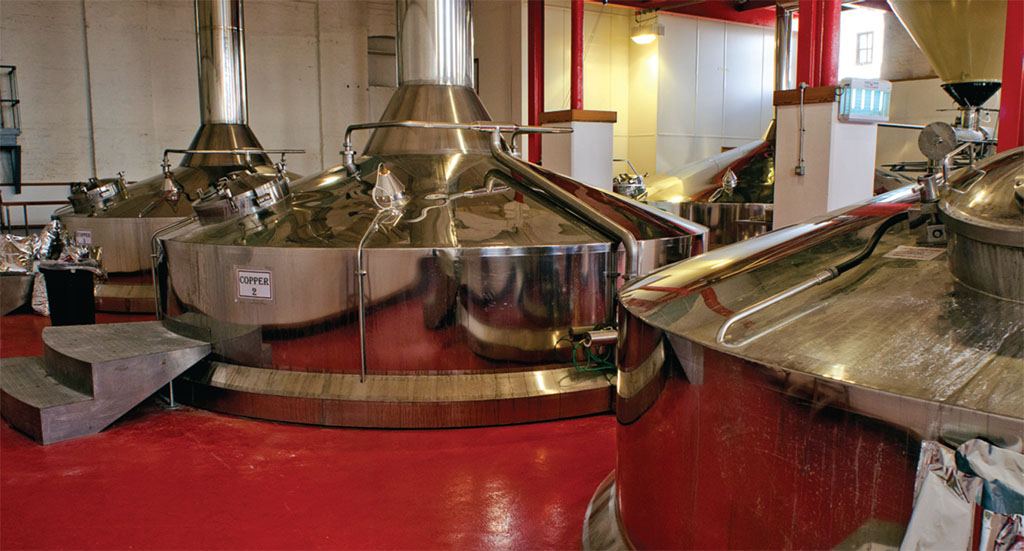 Marston’s Burton plant, a sprawling Victorian compound of red brick and gray stone, has been their primary brewery since 1897. At its center is a fine little pub, the start and end of a factory tour, where their flagship Pedigree is always on tap. Sitting in the pub, Gilleland explains that Burton breweries get their water from artesian wells sunk deep into layers of gypsum-rich limestone, and minerals from the gypsum bring out the sharpness of the hops in ways that ordinary spring water cannot. “Unfortunately,” Gilleland adds, “by the late 19th century, chemists had figured out how to add these chemicals to whatever local water they had,” a process now known as Burtonization and very common in the industry. “Still, it’s not the same,” she said. “You still get the best beer from Burton water.” 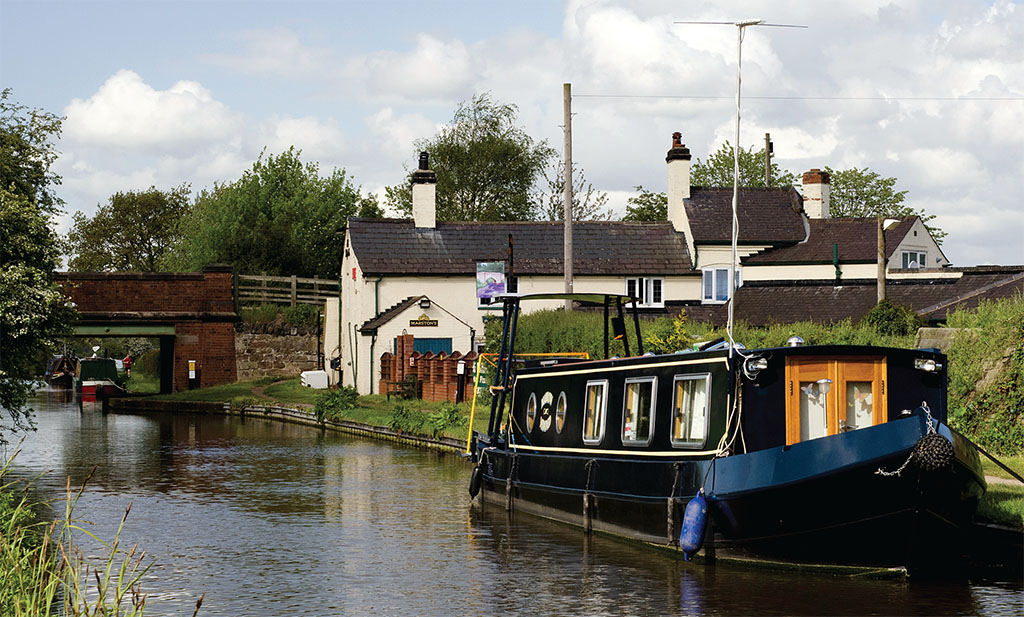 Marston’s has a second advantage: it ferments its entire output of cask Pedigree in long series of wooden barrels known as Burton Union Sets. In this system, the beer is gently and continuously racked through a line of 24 wood casks, each containing 150 gallons, with the yeast separating naturally as a result. But the term “cask ale” doesn’t refer to barrel-aging; rather, it refers to beer that has never been filtered or pasteurized, and so contains its original live yeast and natural head. The Burton Union method is a superior way of achieving this.

Master cooper Mark Newton keeps the barrels in top condition, cleaning and scraping, repairing, and replacing the white oak staves. A few decades ago the Burton Union system was common among Burton brewers, and Bass (then the largest brewery in the country) had hundreds of sets. Now Marston’s is the only commercial brewer in the world to use them.

A third reason for Burton’s former glory can be found on the plant’s eastern edge—a canal boat port on the Trent and Mersey Canal, now filled with pleasure craft but once jammed with beer barges. And not only for Marston’s; on the east side of the marina sits the former malting for Bass Ale, the largest brewer in Britain until the company’s destruction and dismemberment in 2000. The massive Bass compound is now owned by Coors, which uses it to manufacture light American-style Pilsners, while the Bass brand itself is owned by Anheuser-Busch InBev. Bottled and keg Bass is no longer brewed in Burton, while the Bass we get in America is brewed by Anheuser-Busch in New York. Cask Bass, however, remains a Burton beer—brewed across the canal by Marston’s, under license from InBev, and found only in British pubs.

Burton brewing actually dates from 1708, when the Trent River’s navigable reaches were extended upstream to the town’s medieval stone bridge (now gone), and a wharf was built. The Trent flows northward, reaching the North Sea at the Humber Estuary. This gave Burton sea access to the ports of northern Europe. Soon, Burton beers were being shipped to ports around Britain, Germany and the Baltic.

In 1777 the Trent and Mersey Canal opened, giving Burton’s already well-established brewers direct access to Birmingham, Manchester and Liverpool. William Bass founded his famous brewery the same year—not coincidentally, as the 60-year-old Bass had already made a fortune as a common carrier. By the 1840s Burton brewers discovered that their gypsum-laden waters made for a particularly good India Pale Ale (IPA), brewed for an extended shipping life by adding extra hops. As railroads linked Burton to the far corners of the island, Burton’s IPAs flowed to the far corners of the Earth.

There are byproducts of any industry, and they are particularly copious from breweries, whose soaked, spent barley and hops make up a smelly mush that somehow must be disposed of. Of course, it’s edible, smelly mush, and much of it has always been sold as cattle feed. The pungent spent yeast, however, was (and is) sold as people feed—the ubiquitous and beloved breakfast spread Marmite (with an overpowering taste reminiscent of heavily salted seaweed). The giant Marmite plant is still in Burton, but is not open to the public.

The inedible residue had to be sent to the sewage works; in the 1860s, Burton produced more sewage than an ordinary town 10 times its size. Starting in the 1880s, the Claymills Station disposed of this effluent by using an array of four huge steam engines to pump it up a hill to be spread as fertilizer. It is once again in operation, with two of its giant pumps under steam and more than two score lesser engines in operation—one of the grandest, largest and most complete steam-powered sites in Britain.

Marstons Visitors Centre Shobnall Road, Burton on Trent www.marstonsbeercompany.com Brewery tours are given Monday through Friday, morning or afternoon. The cost is £6.50 per person and includes two pints of Marston’s ales. The National Brewery Centre Horninglow Street, Burton on Trent www.nationalbrewerycentre.co.uk Open every day from 10 a.m., this is the national museum devoted to everything beer. Admission is £7.95 and includes vouchers to sample four different beers. In addition to “The Brewing Experience,” the center includes historic collections of beer and brewing paraphernalia, shire horses, a “beer boutique”, and The Brewery Tap Bar gastro-pub.

The heirs of wealthy brewers became politically active brewers, organizing Burton as a borough, dominating its municipal government, and representing it in Parliament. One by one, these politically active brewers were granted titles and elevated to the House of Lords. Originally the brewer-lords were split between the Tories and the Liberals, but when the Liberals began a long flirtation with the Temperance movement, the brewers deserted. Known for decades as the Beerage, the brewer-lords collaborated to defeat British Prohibition and prevent punitive anti-pub laws.

The Beerage did well by Burton. Civic buildings, institutes, memorials, and parks were duly funded. None remain as impressive as the massive water meadows of the Trent, converted into extensive parklands known as The Washlands. Here the eastern bank of the Trent pushes against substantial bluffs to spread westward across seasonally flooded flatlands—the hayfields of the medieval town. The town sits above the Washlands on a low flat shelf, squeezed between the water meadows on the east and the Trend and Mersey Canal on the west. The Washlands is the town’s true glory—cut by meandering arms of the river and crossed by fine old footbridges, installed in the Victorian height of the brewery era. The best is the half-mile-long Stapenhill Viaduct, built by Michael Arthur Bass, 1st Baron Burton, and includes a 120-foot-long suspension footbridge of cast iron. This was an act of practical philanthropy; it allowed brewery workers who lived on the far side of the river to reach the town when the river was in flood.

Not unexpectedly, Burton has a first-rate beer museum&mdesh; the National Brewery Centre, set up by Bass in the 1990s as a monument to itself. The Bass Company may be long gone, but its museum lives on, now in the hands of a charitable trust. And a grand one it is, with period-costumed docents guiding you through intelligent and imaginative exhibits, including a stable of draft horses still used for parades. There’s a superb micro-brewery on-site, where Head Brewer Jim Appelbee has set about reviving Burton’s great Worthington cask ales, famous during World War II. The tiny plant does more than furnish a tour stop and fine historic ales for the attached pub (where the food is excellent, by the way); it’s developing recipes and expertise for a potential cask ale revival in the adjacent Coors plant. 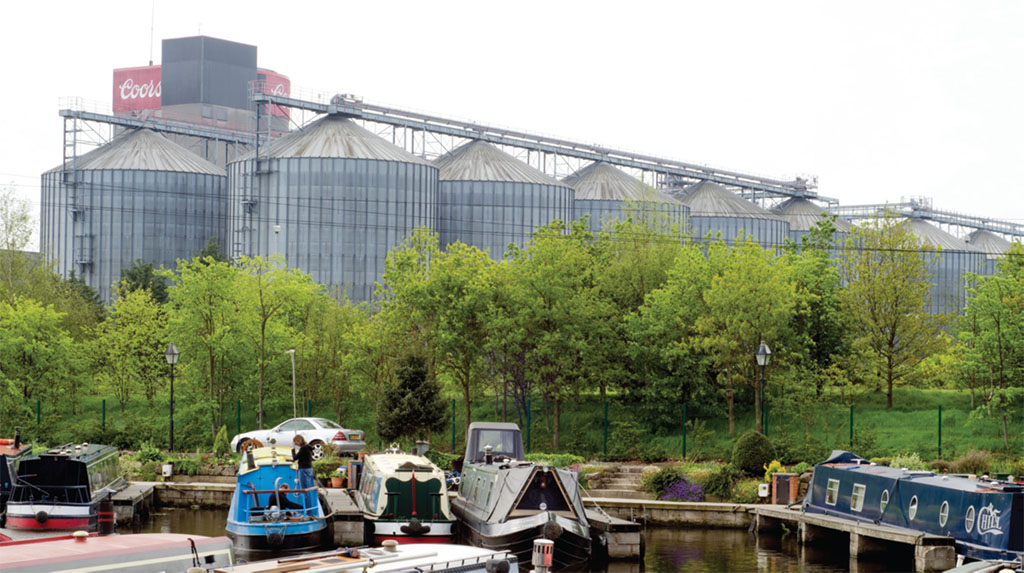 With the loss of so many giants, the title of Burton’s second-largest brewer of traditional English ales has fallen to Burton Bridge Brewery, near the town center at the site of the old medieval bridge and its modern replacement. Founded in 1980, the small brewery is jammed into the cramped spaces behind its first pub (it now owns six), with casks stacked in every spare corner. The pub itself is a perfect gem—a classic two-sided bar, both sides jammed with regulars, serving a full range of site-brewed cask ales on tap kept perfectly down in the cellar.

Founder and co-owner Geoff Mumford admits it’s not been easy running for 30 years a small brewery whose beers are distributed over a 100-mile radius. “Many’s the time I’ve had to drive the truck myself.” But when accused of being a microbrew pioneer, he answers only with an odd look, which may be shyness or maybe just amusement. As that maybe, he’s keeping up a grand tradition—the famous beers of Burton.