A century of women’s suffrage in Britain 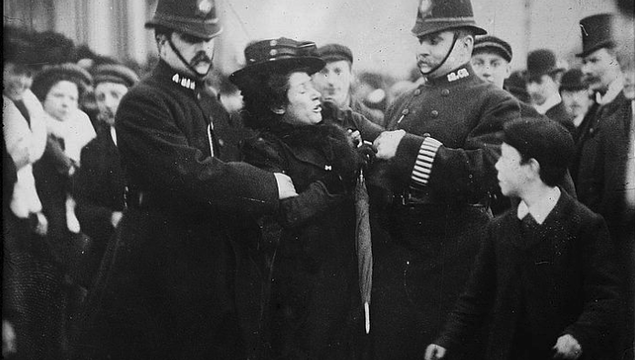 A suffragette being arrested in London. Library of Congress

Chaining yourself to the railings of Number 10 is always going to garner more headlines than a well-argued letter to the Times.

The story of women’s suffrage in Great Britain is long, complicated and, occasionally, violent. It divided families and even, on occasion, turned deadly, but the world would never see “the gentle sex” in the same light again.

People may have privately discussed the “impossible dream” of women’s rights before Mary Wollstonecraft’s A Vindication of the Rights of Women in 1792, but it’s generally agreed she put the idea into the public realm. Throughout the 19th century small voices grew increasingly louder (thank you, John Stuart Mill, for petitioning Parliament in 1867), and various committees were formed, the first by Lydia Becker, also in 1867.

New Zealand granted women the right to vote in 1893; Australia in 1902, but the established democracies dragged their heels. In Britain in 1897, Millicent Garret Fawcett headed the new National Union of Women’s Suffrage Societies, in the hope they’d be stronger as a single force, but it was hard going. They had supporters in both main political parties, but the harrumphing from the majority at the idea of women having a say at Westminster drowned out more moderate voices. Prime Minister Henry Asquith was dead set against reform and Winston Churchill wrote “Nothing would induce me to vote for giving women the franchise.” The fledgling Labour Party had its hands full campaigning for the vote for working-class men. Other political issues, such as problems in Ireland and the vexed question of an outdated tax system, took valuable debating time and the concept was quietly sidelined.

Frustrated by the snail’s pace of the suffragists, a small group of women decided things needed hotting up. “Deeds, not words” were the only thing the politicians would understand, figured Emmeline Pankhurst and her daughters, Christabel and Sylvia. Pankhurst founded the Women’s Social and Political Union in 1903.

Nowadays we mainly remember the publicity-seeking antics of the militant “suffragettes” (originally a term meant as an insult, which they rather liked) and forget the quieter, just as determined suffragists, and not without reason. Chaining yourself to the railings of Number 10 is always going to garner more headlines than a well-argued letter to the Times. Riots and placards attract more public alarm than reasoned debate. Nail bombs focus minds.

Violence escalated on both sides. Women slashed Old Masters, set explosives, and attacked buildings. There was even an assassination attempt on Henry Asquith, in what was rapidly becoming what can only be described, even today, as terrorism. The police in their turn spared no violence in arresting them. In retaliation, the women learned the self-defence martial art of jiu-jitsu. Imprisoned suffragettes went on a hunger strike, leading to horrific acts of force-feeding, not always via the mouth or even the nose. The situation became so bad Parliament passed the infamous “Cat and Mouse Act” was passed, allowing hunger strikers to be released until they were well enough to be re-arrested, rather than allow these “irrational,” women the vote. Something serious had to end the impasse, but no one foresaw the fire that would replace the suffragette’s frying pan.

With the onset of World War I, even the angriest suffragettes admitted there were, temporarily, some things more important than their cause. They knuckled down and worked alongside the men towards the war effort, in many ways, the most liberating thing of all. Women worked in factories, on the land, as drivers, and even on the front line as nurses.

This was what finally cracked Parliament. In February 1918 property-owning women over the age of 30 finally received the right to vote. It would take another 10 years for universal adult suffrage to arrive.

2018 sees a series of events and exhibitions commemorating the centenary of women’s suffrage. Here are some of the best.

Prominent suffragette Emily Wilding Davison famously spent Census Night 1911 in a cupboard in the Houses of Parliament’s crypt so she could claim to “live” at the seat of democracy.

Throughout 2018 the Houses of Parliament will be conducting tours, creating videos, holding talks, and even holding “Equali-Teas,” where visitors can celebrate democracy over a cuppa and a slice of cake. The major Voice and Vote exhibition opens on June  27 and will run to October 6 in Westminster Hall.

Sadly, if you want to see the cupboard, due to its being part of the Chapel of St Mary, you’ll need to visit during Open House weekend (usually in September); the only time it is accessible to the public.

The ultimate in deeds not words, Davison never lived to see her efforts rewarded. She was trampled by the King’s horse at the 1913 Epsom Derby, becoming one of the suffrage movement’s most famous martyrs.

A memorial to Emmeline Pankhurst and her daughter, Christabel, may be found at Victoria Tower Gardens, just behind the Houses of Parliament. The work of her other daughter Sylvia, who, partly due to her opposition to World War I,  broke away from the movement, has only recently been recognized. A statue to her is planned in Clerkenwell.

On February 1, 1913, using an iron crowbar hidden beneath her coat, working woman Leonora Cohen smashed the display case containing Crown Jewels in the Tower of London’s Wakefield Tower. Wrapped around the bar was a message that read, “My Protest to the Government for its refusal to Enfranchise Women, but continues to torture women prisoners—Deeds Not Words. Leonora Cohen.”

The act took audacity; she was already getting hate mail and her son was being bullied at school for her views. She knew she would be caught; there was only one exit from the jewel tower. She had already witnessed the horrors of force-feeding. On the day itself, when she reached the Tower Hill tube stop Cohen’s bravery suffered a temporary lapse; she stayed on the Circle Line for an entire loop before finally plucking up the courage to enter the Tower.  She was arrested, imprisoned, and force-fed, but continued to campaign for women’s rights to her death in 1978, at the age of 105.

A series of events, displays, and talks form part of Historic Royal Palaces’ celebration, including Princess Sophia Singh, the daughter of an exiled Maharaja, who joined several South Asian women in the cause of women’s rights and became known as the Hampton Court Palace suffragette.

Not every woman was in favor of female suffrage. The National Trust’s own founder, Octavia Hill, was, perhaps surprisingly, against the idea. Killerton House in Devon saw a family divided to almost civil war levels. Eleanor Acland was a leading suffragist campaigner, while her Aunt Gertrude hosted anti-suffrage garden parties. A new exhibition in the house reveals the arguments on both sides and dilemmas within the movement. Eleanor, perhaps having listened to her aunt’s arguments, exchanged letters with Christabel Pankhurst, regarding the more violent suffragette tactics, worrying they would undermine the lawful suffragist campaign.

Killerton holds the National Trust’s fashion collection and there will be a new display of objects and costumes from the time, with a focus on how fashion was used as campaign fodder by the suffragettes.

Nancy Langhorne was born into an impoverished Virginia family but married extremely well. Her first marriage failed, to socialite Robert Gould Shaw II, but her second, to Waldorf Astor, son of the newspaper magnate William Waldorf Astor, was to make her name.

She encouraged Waldorf to run for Parliament. He became MP for Plymouth Sutton, but on the death of his father, inherited the title Viscount Astor and joined the House of Lords. Nancy herself stood for her husband’s vacant seat and, on December 1, 1919, Nancy Astor became the first female MP to take a seat in the House of Commons.

The graceful seat of Cliveden in Buckinghamshire had been home to several strong women by the time the Astors moved there in 1906. A new exhibition, Misrepresented?, at Cliveden this year celebrates the life of Nancy Astor, along with three previous female inhabitants, including Elizabeth Villers, Charles II’s mistress, Princess Augusta, 18th-century Princess of Wales, and Harriet, Duchess of Sutherland, the original “Champagne Socialist.”

Emily Langton-Massingberd’s husband Edmund had already died when her father passed away in 1887. Emily inherited the Gunby Estate and became one of the few women of her time who didn’t have to answer to anyone. She dressed in men’s clothes and ran the estate herself—but she couldn’t vote. She became a staunch suffragist, as well as an early anti-vivisectionist and temperance advocate. Massingberd was, most famously, founder of the Pioneer Club, a society for the advancement and education of women that included Eleanor Marx and children’s author L.T. Meade.

On Vote for Emily days at Gunby this year, costumed actors will reenact moments from her suffragist campaign.

Check out this incredible archive footage from during the Women's suffrage movement: