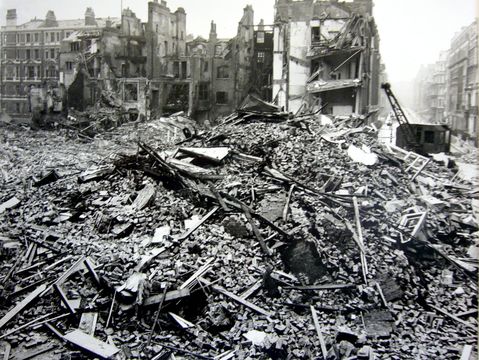 When the anticipated invasion of Britain failed to materialize in 1940, Londoners relaxed, but soon they faced a frightening new threat. Joan McKenzie, a survivor, recalls World War II's Hitler's V-weapon offensive during the Blitz.

In the April/May 1993 issue, Joan MacKenzie recounted her experiences as a young Shell Oil employee living near London at the outbreak of the Second World War. She described how the War made her 'grow up fast,' and told of life during the Blitz of 1940. In this issue, author John Wukovits continues her story:

From 7th September until mid-November, the Luftwaffe sent an average of 163 bombers over London each night and dropped a total of more than 13,000 tons of bombs and 12,000 incendiary canisters, but German losses continued to mount while British morale remained firm. In the final three weeks of September, 433 German planes spiralled to the ground and with the coming of worse weather and shorter days, England stood to benefit with each passing week. In October, an impatient Hitler abandoned plans for an invasion and turned his attention elsewhere.

'After the War,' recalls MacKenzie, 'when we learned how close England had come to losing the battle, people said, "My goodness, how close we came to an invasion!" And we could not have put up much resistance at all. Road signs were removed or turned the wrong way, and farmers put old pieces of machinery in their fields so planes couldn't land, but if the Germans had achieved a foothold, we'd have been sunk. But I was young and believed we were invincible then. We trusted what our leaders told us and we were sure we'd win. Morale never got low. In fact, Hitler's moves had the exact opposite effect. We would say there was no way Hitler was going to defeat us.'

'There were two buckets almost anywhere you went,' states MacKenzie, 'one filled with sand and the other with water. Shell Oil organized us into groups that had to go up on the roof to watch for incendiaries that might catch the roof on fire. We grew up with buckets. I actually have a picture of a friend's wedding day and there, right behind her in the wedding picture, are two buckets.

'The incendiary attacks on London were the most devastating thing to see. The whole sky was red and you could smell the fires burning. One morning I walked across London and all the streets were littered with debris. Fires still raged. Hoses were everywhere, the firemen with their blackened faces looked dead tired. It took me more than one hour to walk what normally took me 20 minutes.'

Still, MacKenzie claims, 'we adapted to any new thing that came along,' whether it be a new weapon or a food shortage. Rationing imposed hardship on most, but somehow people managed to get through. Her mother received ration cards that enabled her to pick up needed items.

'You registered with different stores and shopped at that store for that particular item. We had small portions of meat, and some fruit and vegetables. Eggs were almost non-existent. I remember holding an egg in my hand once, staring at it and trying to decide how I wanted to use it--scramble it, fry it, or use it for baking.'

Neighbours exchanged surplus items with one another to acquire something they needed. MacKenzie's mother picked up extra meat in this manner, and people in the country came in with extra vegetables to trade for cigarettes.

'Makeup was very hard to get, especially later in the War. Soldiers would often bring us some. I don't know where in the world they got it, but we didn't care. When the American soldiers came, they had all kinds of things and were so generous.

'Even water was rationed. We were supposed to draw a line on the bathtub, about five inches up, that we were not to go above. I doubt that anyone cheated on it.'

In 1942, MacKenzie joined the R.A.F. because she 'wanted to do my part.' She was assigned to North Weald, a secret station near the south-east coast, with responsibility for south-east England and western France. Her job involved tracking British and German fighters for Fighter Command. As fighters moved about, MacKenzie plotted their direction, height, and numbers on a huge map.

'We always knew within a five-minute span where the enemy planes were. Sometimes we plotted German aircraft and we knew that they were right over our heads!'

The gruelling work taxed each plotter's endurance, for she had to keep track of any plane entering her sector. This was particularly so when an entire group of British planes soared either to intercept enemy planes or cross the Channel into France.

'We were in contact with all the planes we sent up in what we called a "Show." We didn't have a minute to think because there was always some voice chattering in our headset, and we seemed to be constantly two plots behind what we heard. We had to have total concentration. Some of our all-night sessions, where we might have a ten-minute break for soup or something hot, were exhausting. I'd get into a chair with a mug of soup, but the next thing I knew someone was shaking me and saying it was time to get back to work. I would not have sipped anything from the mug.

'Some girls identified with the pilots they directed and would suffer as a result. We all had this feeling that we held all these lives in our hands. It was quite a responsibility.'

Luftwaffe planes continued to plague England until late 1944 when Allied troops pushed German forces back out of range into France. By then, however, a newer weapon terrorized Britons. On 13th June, 1944, ten V-1 'doodlebugs' leapt from launchers in north-west France toward England. The V-1 Vergeltungswaffen ('reprisal weapon') was basically a flying bomb that delivered a warhead of 1,875 lbs and travelled at a maximum speed of 350 miles per hour.

The weapon hammered a heightened fear into British souls already pummelled by years of German fighters and bombers. On 14th June alone, 244 V-1s smashed into London. Londoners suffered 10,000 casualties in the first week of attacks. Winston Churchill later wrote that the 'blind impersonal nature of the missile made the individual on the ground feel helpless. There was little that he could do, no human enemy that he could see shot down.'

MacKenzie stood in her plotting room when the first V-1 raced overhead, frightening everyone with its sudden impact. 'Dead silence encompassed the plotting room and everybody had goosebumps all over. How, we wondered, could this happen? I remember thinking, "Wow, we've come through the Blitz and everything else, and now we have this."'

A more potent threat emerged from Holland on 8th September when the initial V-2s zoomed across the Channel. Reaching the amazing speed of 3,600 miles per hour, these liquid-fuel rockets ascended 50 miles in a journey usually lasting less than four minutes from launching pad to target. Due to their incredible acceleration, the V-2s were impossible to intercept.

'We couldn't hear these rockets like the V-1s, and we just could not imagine how something could fly over and bomb us without being heard. We were not able to plot their flights; all we did was plot where they landed to determine a pattern. Many began falling near Essex, so I called home and begged my parents to move out for a few months.'

MacKenzie can never forget war's long-awaited end in May, 1945. 'There was an enormous celebration. London was absolutely wild, with people singing and shouting. It was impossible to imagine that, after all these years, the War was over. Nothing in my life comes close to that time.'

Joan MacKenzie emigrated to the United States in 1946 with her husband Robert, an American underwater demolitions specialist, whom she married in 1944. After settling in the Detroit area, the couple moved in 1955 to the Trenton, Michigan, home MacKenzie still occupies.

Though she seldom dwells upon the War, MacKenzie admits it gave her a more philosophical outlook about certain matters. 'Someone asked me why tornadoes don't bother me, and I told him I went through six years of war and made it, so I'm not going to get all in a tizzy now. In the War, either you were going to get killed or you weren't. There was no sense dwelling upon it. It's the same thing now.'

She holds fond memories of a time that made her 'grow up fast. The war years had a lot of good to them because they brought a lot of people together. There was a great camaraderie.

'Mostly I remember the good times, not the sad.'

Watch this incredible British Pathé footage of WW2 and The Blitz begin, The Neutrality Acts and more: