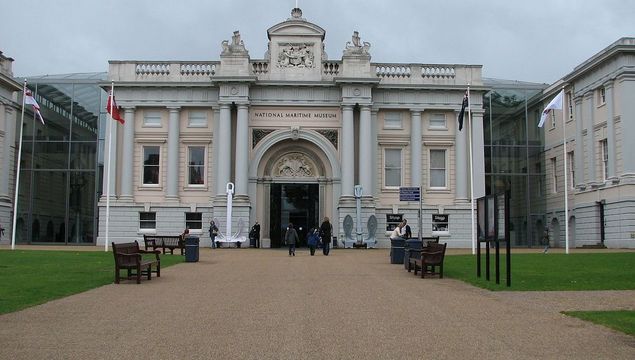 The Cutty Sark, The Old Naval College, the historic covered market - up the Thames, London's Greenwich is a wonderland of British maritime history and Georgian and Regency surrounds.

One of the most unforgettable sights in London is the view from a riverboat on the River Thames as the boat turns from Deptford Reach toward Greenwich Peninsula, an approach used by monarch and commoner alike from medieval times to the present day. That first glimpse of architectural majesty still has the power to bring a slight gasp from the most jaded of daily commuters.

Just a few miles from central London, Greenwich was a favorite seat of kings and queens until the Hanover dynasty. Of the ancient palace of Placentia, beloved by Henry VIII and Queen Elizabeth I, virtually nothing remains above ground except Inigo Jones’ triumph of Palladian restraint, The Queen’s House, and the buildings that would collectively become The Royal Naval College.

The riverboat sets down at Greenwich Pier, where the now-charred remains of Cutty Sark lie in dry dock. Launched in 1869, it is the sole survivor of a once numerous fleet transporting tea, that most British of beverages, from China.

The Old Royal Naval College makes up the bulk of the fabulous river vista and is the brainchild of Sir Christopher Wren. Four corresponding courts open onto a central courtyard married by two towering, domed structures—the Chapel and the Painted Hall.

The Chapel, to one side, is sophisticated and relatively simple, but the Painted Hall, originally intended as the pensioners’ mess room, is a polished release of Baroque exuberance. James Thornhill, who painted every inch of the ceilings and walls at the paltry sum of £3 and £1 per foot respectively, could hardly have known what he was letting himself in for when Wren asked him for a small favor. It took him 19 years. By the time this masterpiece was complete, it was considered too good for the pensioners and they never got their dining hall.

The pensioners were allowed, however, to use the skittle alley in the undercroft below the chapel, believed to date from the 1820s. It is only viewable on one of the daily guided tours of what eventually became the Royal Naval College but is an eloquent insight into the lives of Greenwich Pensioners—and the naval officers who followed them.

Greenwich’s covered market was built in 1831, the houses and shops around the exterior still maintaining their Regency splendor. Inside, just above the entrance, rogue shopkeepers are warned, “A false balance is an abomination to God, but a just weight is His delight.” The market operates from Thursday to Sunday, selling, on different days, antiques, crafts, and specialty food.

Several Georgian and Regency streets remain around the town center, the best of which are Hills Royal and Crooms, the latter following the line of the Royal Park up to Blackheath, punctuated by 18th-century Ranger’s House at the top, and housing the exquisite Fan Museum, the only one of its kind in the world. These two ancient streets, whose histories both go back further than most of the houses on them, are connected by Gloucester Circus, Greenwich’s 18th-century attempt at gentrification.

DOWN BY THE RIVER, THE GLORIOUS Trafalgar Tavern still looks much as it did in Regency times. Its elegant stucco walls and bow windows afford a fine view of both reaches of the Thames to the diners who still come here for the house specialty, whitebait.

Greenwich boasts four almshouses, the most famous of which is Trinity Hospital, nestled behind the gigantic power station along the Thames path, a few yards away from the Trafalgar Tavern. Still inhabited by “21 retired gentlemen of Greenwich,” it is not open to the public, but on sunny days the arched exterior doors are often open, revealing glimpses of the ancient courtyard and fountain within.

In the very center of town sits Nicholas Hawksmoor’s St. Alfege’s Church. It often has recitals by students from local Trinity College of Music at lunchtime, the best time to view the starkly beautiful interior.

Any visit to Greenwich should include the park, one of the most ancient of all the Royal Parks. It contains both Anglo-Saxon and Roman remains and still has an area dedicated to the royal deer. Its most famous claim to fame, of course, is The Old Royal Observatory, established by King Charles II to promote astronomy in order to solve the shipping problem of the day, that of calculating longitude. Built by Sir Christopher Wren on a very tight budget, the Octagon Room is still considered a masterpiece. It is here that millions of visitors have stood for a photograph of themselves straddling the Meridian Line between the Eastern and Western hemispheres. (The best time to see the line is at night, when a green laser beam follows its exact course.)

From the top of Observatory Hill, the statue of General James Wolfe must have one of the finest views in London—to the left the City itself, to the right the Thames estuary and straight ahead the modern metropolis that is Canary Wharf. The hill is extremely steep at this point, and was once the venue for a saucy local pastime, tumbling. This involved young men taking their sweethearts to the top of the hill, then dragging them, squealing, back down as fast as possible.

Walking downhill at a somewhat more sedate pace, modern visitors can either take the boat back to Westminster Pier, or use their Oyster Cards to return above ground on the Docklands Light Railway, weaving through Canary Wharf’s skyscrapers; the late 20th-century steel-and-glass counterbalance to Greenwich’s ancient architecture.