Taking a holiday cruise on the Norfolk Broads 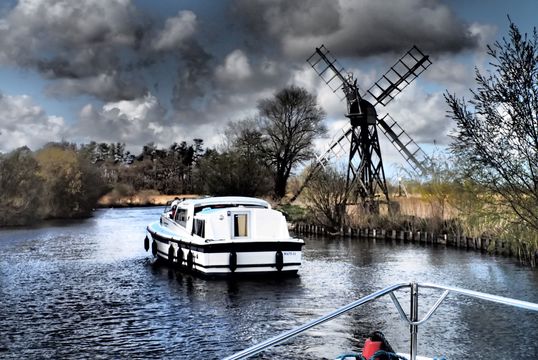 Taking a leisurely cruise on the Norfolk Broads.Mike Hudson / CC

"There is nothing - absolutely nothing - half so much worth doing as simply messing about in boats." Take in the breathtaking countryside, fascinating history, and wonderful activities along the rivers and lakes of Norfolk.

Across the northeast corner of East Anglia, where the English Channel meets the North Sea, lies the expanse of marshland and waterways known as the Norfolk Broads. Great crested grebes and heron, flowering sedge and banks of water reed, ranks of windmills, and miles of placid rivers meander across the plains of Norfolk.

The Broads themselves are shallow lakes of many shapes and sizes, cut out in the Middle Ages by the digging of peat for fuel. They bulge like aneurysms from the river arteries that connect Norwich and the ports of Lowestoft and Great Yarmouth and spread out northwest to Coltishall, Stalham, and Horsey Mere.

Broadland landscape is essentially flat, often yielding 180-degree views from horizon to horizon and capped by the famous “painters’ sky” of East Anglia. So slow and gentle are the waters that the tides are significant 25 miles inland. Three northern and three southern rivers interconnect through the working harbor of Great Yarmouth.

History of trade and industry

The northern rivers, the Ant, the Thurne, and the Bure, tend to be quiet waters. They host an extraordinary ecosystem of water birds and marsh plants, butterflies, and reed beds. The southern Yare and Waveney rivers are faster and more commercial. For centuries they connected trade between Norwich and the ports of Lowestoft and Great Yarmouth. Processing more than a million tons of sugar beets a year, the oldest sugar refinery in Britain at Cantley looms for miles against the backdrop of cropland, pastureland, and grazing cows. This is the idyllic countryside.

The River Chet, a short tributary of the Yare, was dug out by hand in the 1880s. The mill at Loddon contracted to make the tiny Chet navigable to the Yare. Workmen in thigh-high leather boots hand-dug the three and a half miles from Loddon to the Yare. Now, the Chet flows placidly in its channel, raised a few feet above the surrounding farmland. Together, these six rivers crisscross northeastern Norfolk with more than 300 miles of navigable waters.

Holidaying on the water

The English have been cruising the Broads as a popular holiday for a century. The boats are known as Broads Cruisers. They are specially designed for and built on the Norfolk waterways in sizes sleeping two passengers to a dozen. Cruisers are extraordinarily well-engineered for comfort and efficiency.

A federation of boatyards, in riverside towns throughout Broadland, build and hire out both cruisers and sailing yachts to holidaymakers by the hundreds. Boats from any association boatyard are welcome to hospitality, free moorings, and freshwater at some 30 boatyards throughout the river system.

We set off on the Bure from Wroxham, the bustling riverside market town that calls itself the unofficial capital of the Broads. With a couple of stops every day to visit old churches, riverside villages, windmills, and nature reserves, much of our time is spent on the river - watching Norfolk drift by at four to six miles an hour.

Cruising the Broads affords a succession of gentle days, overtaking tacking sails, feeding a dozen species of ducks from the boat’s well, and photographing a Norman stone church from every angle as the river meanders around it. The sense of place becomes palpable. Days of studying the river charts, walking village greens, and small talk in riverside chandler’s shops impress the landscape and local history intimately upon river travelers.

The most prominent man-made feature of the Broadland countryside is the windmill. Varying in repair from fully restored to derelict brick shells, windmills are spangled across the riversides. They were built to pump water from the saturated marsh and fenland into the rivers. They served the purpose well, draining the countryside for farming and swelling the rivers. Moor up at 19th-century Stracey Arms Windpump on the River Bure for a closer look at the inner workings of the restored 4-story windmill.

In the Broads’ working days, single-masted cargo schooners called wherries plied the water, carrying coal, grain, thatching reed, and supplies to riverfront villages. The last trading wherry remaining, The Albion, ended its cargo years in 1949. Now, the Norfolk Wherry Trust maintains the traditional boat, lovingly restored, as a charter vessel. Only half a dozen of the old boats still sail.

How important commerce used to be to the rivers is evidenced by Haddiscoe New Cut. This man-made canal was dug in 1833 to help the port at Lowestoft compete with Great Yarmouth for the profitable Norwich trade. The merchant community at Lowestoft cut the two and a half-mile canal to connect the Yare to the River Waveney as a short cut into Norwich.

The navigable reach of the River Yare is the medieval cathedral city of Norwich, county town of Norfolk. Cruising past the industrial estates of Norwich’s western suburbs, it’s easy to see the rich prize of the city’s business. From the 1200s to the 18th century, Norwich was the second-largest city in England. Holiday sailors moor at the Yacht Basin, where trading wherries off-loaded 200 years ago. 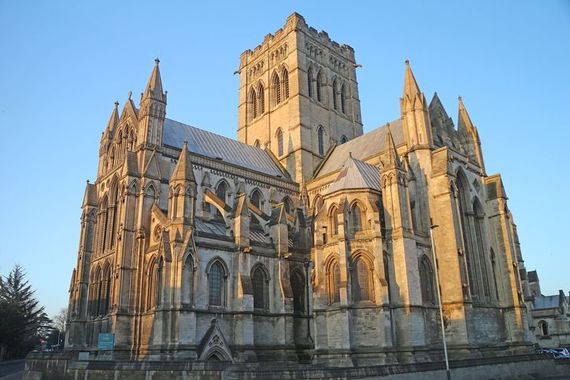 Next to the broad lawns behind 13th-century Norwich Cathedral, the quay makes an excellent base for exploring the ancient city on foot. In addition to the magnificent cathedral (with the second tallest spire in the country), wander up cobbled Elm Hill, browse in England’s largest open-air market, visit the Mustard Museum and the regional art museum at Norwich Castle.

Natural history rather than social history, however, dominates a Broadland holiday. Coots and geese float along beside the boat, platoons of butterflies flit among the marsh flowers.

With some ecologically sensitive exceptions, river sailors can simply sink their round anchors along the riverbank and watch life. A few hours coarse fishing for roach and tench is a popular pastime. Stops such as the How Hill Nature Reserve, the Broadland Conservation Centre, and the nature trails at Hickling Broad offer an opportunity to stroll into the fens and reed beds and observe the natural world even closer. Every few miles the verdant shoreline is broken by a riverside pub.

At Reedham Ferry, the eponymous chain-driven flatboat (carrying two cars at a time) is the last car ferry in East Anglia, and the only river crossing over the Yare for some 25 miles. The inn sits quayside, surrounded by fields. In addition to offering good food and drink, there are free showers for river folk. On summer evenings the moorings are full, and the bar and restaurant buzz with river-talk through the long Norfolk twilight.

Down on the Waveney at St. Olaves, the Bell Inn lays claim to be the oldest pub in Broadland. An underground tunnel leads from the riverside inn to the 13th-century Augustinian priory of St. Olaves just up the road. The ghost of a scarlet lady haunts the oldest part of the pub. She’s been felt as a cold chill, if not seen, in recent days.

The cold chill a traveler is most likely to feel, though, is the wind. Across the flat expanse of eastern Norfolk no geographical features interrupt currents sweeping off the North Sea or up the English Channel. While the Norfolk climate is mild and friendly, any season finds the winds cooling the full arc of the sun’s path, blowing upriver to Coltishall and Stalham.

Back at Reedham Ferry, lights are on along the quay. Closing time is 11, and holidaymakers late at the bar are heading for their boats. Tomorrow, they’ll all be off –some upriver to Norwich, others down the Haddiscoe New Cut toward Oulton Broad or Beccles. Some are timing the tide through Great Yarmouth, to cruise Breydon Water at low slack water and turn north into the River Bure. By midnight, the only sound on the Yare is the ducks.

Of course, for land lovers, it is not difficult at all to explore Broadland by car. Norwich makes a natural place to begin. Do take a day or so in the medieval city. The A140 leads north to the coast at Cromer. You might visit the estate of Blickling Hall (National Trust) on the way. Take a stroll on Cromer Pier and the small harbor, where visitors and locals fish and jig for crabs.

The A149 heads east across the fields of north Broadland. Stop at Potter Heigham, the northern center for boating, where an arched stone bridge over the River Thurne prevents many of the Broads cruisers from passing upriver to Hickling Broad.

It’s a dozen miles on to Great Yarmouth, where the Bure joins the River Yare estuary. Both a working port and a Victorian seaside resort, you might spend time at Great Yarmouth’s traditional beachfront attractions or visit nearby Berney Arms Windmill.

Take the A43 south to Beccles, the Broads southern boating center and pretty market town. Then, turn north on the A146 toward Lodden and follow the signs to Reedham Ferry. Cross the Yare on the chain-link ferry and if the timing is right, you might take a meal or a pint at the inn with the river folk. An easy drive of 15 miles returns you to Norwich.

Two associations of independent boatyards offer Broads cruisers and sailing yachts for hire. Normal hire period is Saturday to Saturday, although 3 and 4-night rentals are also available. All boats come with fully-equipped galleys, bedding, and color television. Day launches are also available from boatyards throughout Broadland including Wroxham, Potter Heigham, and Beccles.

Access a Broads boating holiday with a train from London to Norwich. From Norwich Station, it is an 8-mile taxi ride to Wroxham.