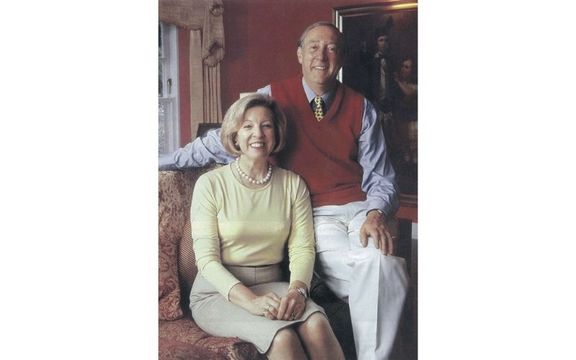 Lord Macdonald leads the far-flung Clan Macdonald as High Chief, and he and Lady Macdonald also preside over their own fair and hospitable corner of the “Garden of Skye.”

“it’s rather romantic to say his decision might have altered the course of history. I think all it might have done was to delay the inevitable, which was the Jacobites would be defeated,” Godfrey, Lord Macdonald of Macdonald, 34th High Chief of Clan Donald, tells me.

We’re at his ancestral home, Kinloch Lodge on the shores of the sea loch Na Dal, and we’re talking about his family history. The subject is Sir Alexander Macdonald, who decided not to send an army to assist Prince Charles Edward Stuart at Culloden in 1746. The wild landscapes of the Hebridean Isle of Skye, sliced through the middle by the jagged Cuillin Hills, have such raw power that you can easily imagine Sir Alexander wrestling with his thoughts on a walk with trusted friends.

“He could have put probably another two or three thousand men in the field,” Lord Macdonald continues. “Who knows what could have then happened?”

But leave aside for the moment the what-ifs of history and the reason why a great Jacobite supporter stayed at home. There’s a Celtic belief that the souls of the good spend eternity in the tranquillity of the Western Isles, and anyone who stays at Kinloch in the southeast “Garden of Skye” must feel they’ve been very good indeed. This one-time family shooting lodge, associated with the Macdonalds’former residence at Armadale Castle, dates back to the 17th century. Since 1973 it has also been a small, intimate hotel, though oil paintings, distinctive furniture, generous log fires, and equally generous drinks trays in the drawing room constantly remind you that you’re a personal guest of Lord and Lady Macdonald.

Lord Macdonald is urbane and quietly charming. He takes his position as chief of the largest and one of the most important Highland clans very seriously. In the 21st century it’s a mainly ceremonial role. “Gone are the days of leading the clan into battle, thank goodness. I look upon myself as an ambassador for the Highlands of Scotland when I travel. I also act as a post box for millions of clan members around the world—there’s an enormous society in North America and Canada. The Clan Donald Centre at Armadale handles lots of genealogical enquiries.”

No Clan exercised such a powerful influence in early Highland history. During the 12th century, Somerled expelled the Vikings from western Scotland. His grandson, Donald, became the founder of Clan Donald, giving his descendants and followers the name of Macdonald, “son of Donald.” These mighty ancestors were Lords of the Isles, rulers of the “Sea Kingdom” on the west coast of Scotland. Their supremacy was not without challenge, notably from the Campbells and also the MacLeods whose seat at Dunvegan on Skye is said to be the oldest inhabited castle in Britain. “We’re all friends now,” Lord Macdonald insists.

The Macdonalds arrived in Skye from the Southern Hebrides in the 15th century, and the story of their turbulent lives is told at The Museum of the Isles at Armadale. Major conflict with the Scottish Crown had led to the abolition of the Lord of the Isles title by 1493, but perhaps the most shocking blow was dealt the Macdonalds in 1692 at Glencoe.

“The Highland chiefs were required to sign an oath of loyalty to King William III, and Macdonald of Glencoe was late in doing it, so the English Crown made an example of him,” Lord Macdonald reflects. “There were 28 people killed, but it was the way it was done that was so terrible. It was slaughter under trust because [Captain Robert Campbell’s] troops were billeted on the Macdonalds and accepted their hospitality, then rose up in the night and killed their hosts.” This treacherous act added white-hot fire to the Jacobite cause.

“We were very active supporters of the 1715 rebellion,” Lord Macdonald returns to the story. “And as a result we had our lands confiscated. They had only been reinstated in 1744, which is why my ancestor Sir Alexander thought, ‘I’m not going to do that again!’ So they didn’t overtly support Bonnie Prince Charlie, but underneath they were great Jacobites.”

Which brings us to Flora Macdonald who helped the Prince, disguised as her maid Betty Burke, escape after his defeat at Culloden. “Her mother married my ancestor—it was her second marriage—and Flora married into one of the junior branches of the family. Of course what she did was greatly supported, even if covertly.” Flora’s final resting place is at Flodigarry at the north end of the island.

As the old order of the clans further broke down following the ‘45, many Scots emigrated. “In the course of a week dozens of people contact me about Clan Donald,” Lord Macdonald says. “The role of the clans continues to evolve, and these days it’s to do with people more and more wanting a sense of identity and belonging.”

That sense is vivid for Macdonalds on Skye, though you don’t need to be an extended family member to appreciate the qualities of Kinloch. The Isle of Skye is just 49 miles long and varies in width from seven to 25 miles. Its scattered population numbers a mere 7,500. Whether you come via the new bridge or by ferry from the Scottish mainland, your first glimpse of a sunset behind the “far Cuillins” of the song is profoundly peaceful. Great sea lochs lick into the wiggling coast; cliffs look primed to bite. Above the wooded hillside where Kinloch sits you’ll probably see a golden eagle soaring.

“We’ve five golden eagles up the hill,” says the ever-vivacious Claire, Lady Macdonald. She’s the mastermind behind the welcoming décor of the lodge and new house, in contemporary shades of warm apricot, red, gold, and green that complement, here, a 17th-century refectory table, there, a print of 18th-century Macdonald ancestors sporting early golf clubs. It was also Claire’s idea to have the portrait on the turret staircase painted of Lord Macdonald in his Lord of the Isles green tartan. “It was for his 50th birthday, and it was about the unkindest thing I could have done,” she recalls ruefully. “He hated posing. The tense look in his face shows it!”

But far more than history is served up at Kinloch. A highlight of any stay is the locally sourced food, copious Scottish breakfasts of porridge, fruit, natural yoghurt, “the finest sausages in the U.K., from our butcher in Inverness,” homemade jam, and scones. Leisurely evening dinners ease their way through fresh fish and Scottish beef to the most mouth-watering puddings—perhaps dark chocolate cream pie with vanilla and orange pastry. As Lord Macdonald has recently planted his own vegetable garden, it’s only a matter of time before Kinloch strawberries feature on the menu.

None of this is surprising, of course, because Claire Macdonald is an award-winning cookery writer—16 books to date—and a refreshingly down-to-earth doyenne of modern Scottish cuisine. Forget haggis—“oh, that is rather a sad cliché”—good Scottish fare is all about the quality of local ingredients.

You’ll find another story about “The Misty Isle,” Flora MacDonald, and Bonnie Prince Charlie in the February 1998 issue, available to order on the Back Issues page at BritishHeitage.com.

“The Highlands and Islands of Scotland are the last great wilderness area in Europe, and some of the best food in the world is caught, grown, and cultivated here,” Claire says without a hint of bias, adding: “Food should have a strong and local identity; it is a welcome and the most important lure to anywhere.”

This is the theme in one of her latest books, Scottish Highland Hospitality, which follows a culinary odyssey to 20 of Claire’s favourite eating establishments in the Highlands and Islands, to places where you can savour shellfish landed less than 30 feet from the door, where the grouse is from the neighbouring estate.

Claire travels frequently to spread the word about modern Scottish cuisine, and when we talk she is fresh from giving two cookery demonstrations to members of the Smithsonian Institution in Washington, D.C. The focus was teatime food. “The Scots are wonderful, robust bakers” she says. “It’s a New Year tradition, for example, to make a very rich, currant-laden fruit cake encased in pastry called black bun.” But characteristically she “broadened the teatime subject to incorporate quality Scottish produce like salmon and the different types of smoking.”

Claire also holds popular cooking demonstrations at Kinloch when she promotes her philosophy, “to cook using ingredients that are naturally grown in season and to keep it simple.” She had no formal training herself and admits with an infectious laugh, “greed inspired me!” In a kitchen hung with Macdonald family portraits and prints of fruit and vegetables, you’ll be inspired by a cross-section of lusty dishes such as aromatic stir-fried monkfish and British pear and ginger with lemon and a fudgy crumble top.

Christmas at Kinloch is a private family affair with organic turkey and trimmings. Then at Hogmanay the Macdonalds throw open their doors to guests again. A four-night celebration features champagne dinners, picnics, and bonfires, culminating in Scottish dancing and fireworks at midnight with Kinloch champagne cocktails, smoked salmon, and chipolatas—from their butcher in Inverness, of course.

On New Year’s Day, a brunch of hot smoked salmon kedgeree with quails’eggs sets up for a hill walk. “On Skye we have the most wonderful landscapes for walking, which is a great hobby for me and my husband,” Claire says. “We walk for an hour every afternoon. We’re building a cairn on the end of our favourite walk up the forestry track behind the house—it’s compulsory to put a stone on it.” With so much fine food at Kinloch, energy certainly isn’t lacking.

You can reach Skye by road from Kyle of Lochalsh across the Skye Bridge (www.skye-bridge.co.uk). The bridge is 200 miles from Edinburgh, 200 miles from Glasgow, and 82 miles from Inverness.

Ferries travel between Mallaig and Armadale (www.calmac.co.uk) as well as Glenelg and Kylerhea (www.skyeferry.co.uk — doesn’t operate in winter).

Claire Macdonald’s cookery books can be ordered via Kinloch’s websites and Amazon.com.