Let’s Go On a Picnic 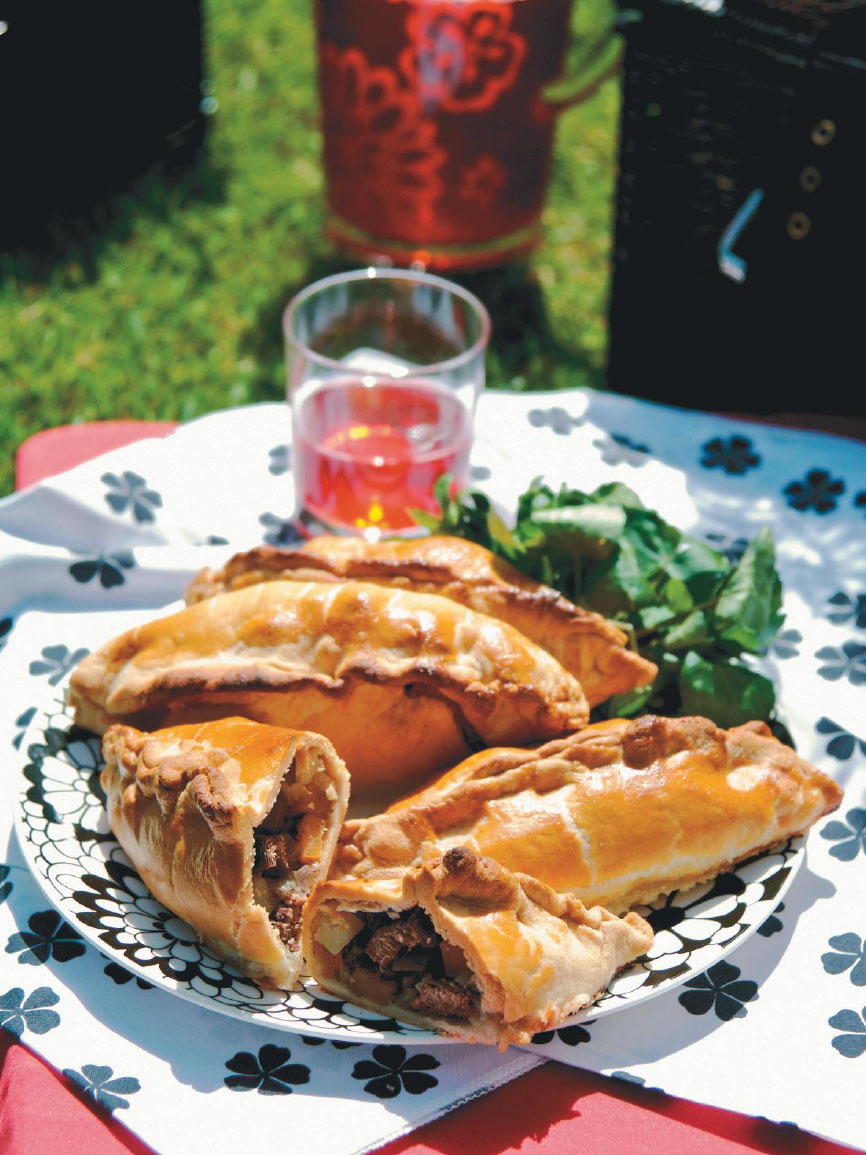 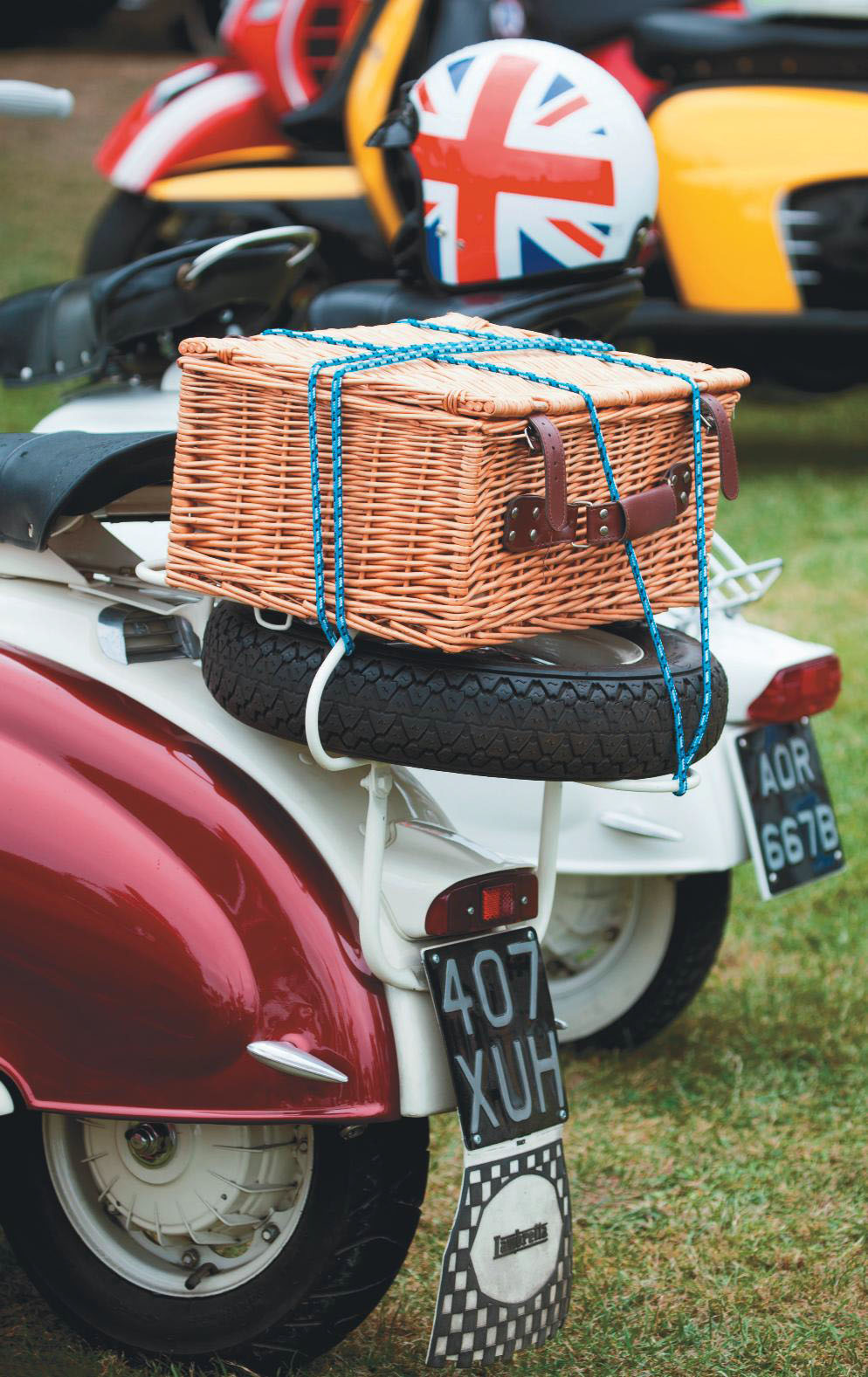 Then there’s the version imagined in grainy black-and-white art photos: sitting in the car with a thermos flask, parked up at some battered seafront, rain lashing outside; tea and tempers steaming inside. The vast majority of picnics lie somewhere between the two, a happy marriage of convenience, finger food and a trip to the local deli counter.
According to the gigantic Oxford Companion to Food the first picnics were 14th-century hunting feasts, though the word itself wasn’t used until the 18th century, from the French piquer—to pick at food—and niquer—a silly, insignificant thing.
The Victorians made an art of al fresco dining, and the heady Edwardian haze just before the First World War saw a golden age, when hampers, boaters and blazers defined an epoch. Nowadays those Glyndebourne fantasies are stronger than ever. Picnicking remains a major British pastime.
Beaches and windswept seafronts are traditional, but parks, hills, woodlands and even the odd farmer’s field are all fair game for picnicking. As long as you’re discreet, make sure there’s no livestock around and leave gates and the countryside as they were when you arrived, I find it’s generally live and let live. Most National Trust and English Heritage venues will have picnic facilities and many open air productions in the summer actively encourage outdoor dining. They will be only too happy to provide you with astronomically priced hampers, but why bother when a little foresight and a trip to the local shop or market provides such rich pickings? 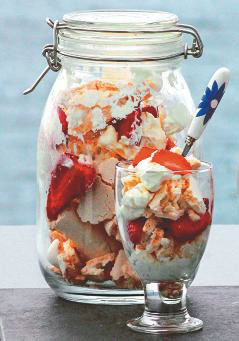 A melange of meringue, whipped cream and berries, Eton Mess can grace any picnic container.[/caption]

I did a straw poll of pals on picnics, and the first thing everyone mentioned was gingham tablecloths, closely followed by tartan car rugs. They’re light, traditional and the ones with plastic backings are ideal (the National Trust do a good one). Sadly the other spring-to-minder, the wicker hamper, has largely died—not because we don’t love our picnic baskets, but because they’re so darned heavy to lug around without that Edwardian army of servants. Carrier bags, jolly totes and rucksacks are much more likely picnic-fellows. Most other equipment can be improvised, but a sharp knife and a bottle opener are certainly essential.
Everyone, but everyone, mentioned Scotch eggs in my unscientific survey, but after that, picnic must-haves became much more diverse. Like Christmas, outdoor dining is something for which every family has its own traditions—as long as it’s cold and eaten easily, anything goes. So rather than picking individual dishes, let’s look at a few categories of picnic food.


The heavy-lifters of the meal, sandwiches are a must, though most Brits would be disappointed if they opened the tin foil to reveal the clichéd cucumber variety—they’re for dainty afternoon teas only. For picnics they need to be a lot more robust: thick, chunky doorstops made from crusty bloomers filled with salmon, tuna, cheese, egg with cress, roast beef and prawn mayonnaise. Homemade chutney is de rigueur. Add to this any other finger food—chicken drumsticks, potato chips, thick Spanish tortillas and, of course, that nice Scotch egg.
Nothing to do with Scotland, Fortnum & Mason invented “scotched” eggs in 1738 as snacks for the gentry traveling by carriage to their country seats. The simple design—a hardboiled egg wrapped in sausage meat and deep-fried—was handy to hold but fell out of fashion in the late 20th century. Recently, however, Scotch eggs have been rediscovered by celebrity chefs and you’re likely to find versions with quails’ eggs and fancy mince in four-star Michelin restaurants. Nearly 300 years after their invention, Fortnum & Mason’s originals are still worth a nibble, too.


Someone once told me you can tell someone’s class by whether they have pasta or rice salad, but since I can’t remember which way round this is, it’s not something I’m bothered about. They’re both delicious, spooned out of a Tupperware box in the sunshine. The best salads are made to match the time of year—whatever’s in season in the greengrocer’s will taste fantastic in a picnic.
I’d thought Coronation Chicken, a bright yellow dish using mayonnaise, curry spices and sultanas, had been relegated to work canteens and sandwich fillings, but in my straw poll, the dish invented in 1953 for the Queen still turns up on a regular basis.


Pastry is the perfect wrapping for portable food as a million Cornish miners and farm laborers will tell you. Dating back to the 1300s, Cornish pasties fitted in workers’ pockets and became particularly popular in the 18th century. Originally, pasties just contained potatoes, swede and onion; meat was too expensive for miners down the pits. Beef chunks were added later, when pasties became a regional delicacy. The perfect model, according to the Cornish Pasty Association, is D-shaped, golden and crimped on one side, never the top.
The pastry used for pork pies, most famously from the Leicestershire town of Melton Mowbray, is not the classic shortcrust found in most picnic food such as sausage rolls and quiches. Hot water crust is a paste, rather than a rollable dough, traditionally raised around a mold to make the pie shape. It’s quite an art and even the smoothest raised pies look homemade, which is perfect for picnics and hunts, which is what they were invented for in the 18th century. A true Melton Mowbray pie will bow at the sides from being baked free-standing and have grey, fresh meat rather than the pink, processed pork used in other recipes.


A celebrity chef recently announced it should be against the law for a British person to picnic without scones, alongside the traditional strawberries and cream. Some people take the ingredients for Eton Mess and mix it up in a big bowl on site (don’t be tempted to premix, the meringue goes soggy), but frankly the stalwarts such as light fruit cake, jam tarts and fairy cakes are less trouble.
Many of my survey-friends mentioned Batten-burg cake with fondness from childhood picnics. Perhaps it’s the gay, holiday colors of this most British of cakes. A four-square-checkerboard log, usually in pink and yellow, wrapped in a layer of marzipan using apricot glaze, no one really knows where it comes from, but it is supposed to have become popular in 1884 when the Queen’s daughter Princess Victoria married Prince Louis of Batten-burg. 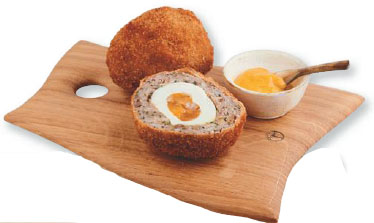 METHOD: Hardboil, cool and peel 4 eggs. Preheat the oven to 390.
Mix sausage and apple and divide into 4 equal portions. Flatten each portion into a round and wrap into a ball around an egg. Beat two eggs, and mix the flour and seasoning in another bowl. Put the breadcrumbs in a large plate.
Roll the eggs, first in the flour, then the egg wash and straight into the breadcrumbs. Put them back through the egg wash with another dip in the breadcrumbs. The double crumb coating stops the eggs from going bald in the oven. Bake 25-30 minutes until golden.


The phrase “lashings of ginger beer” never appeared in any Enid Blyton children’s novel, but it should have done. It is, alongside tea, the archetypal picnic drink and a true delight, at once sweet and piquant. The real thing, much like proper lemonade, is a joy, and can pack quite a punch. The difference between ginger beer and ginger ale has become blurred over the years, but originally beer was brewed, ale being the fizzy drink. You’re most likely to find the carbonated soft drink in the shops but if you see homemade on sale, go for it. Artisan brands capture something of the homemade feel, but check the label before you quaff and drive. 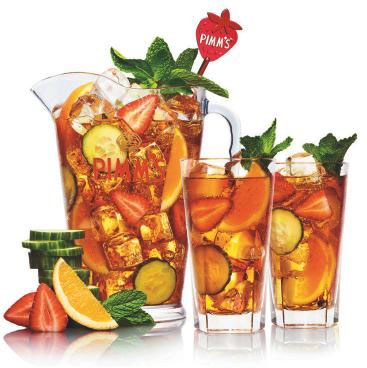 6
Pimm’s is the classic summer drink that tastes nonalcoholic but packs a kick.[/caption]

Lemonade is a popular choice, though my memories are filled with the cheap, fizzy stuff and good old orange squash in plastic mugs. Tea is usually brought in a thermos; few people bother to brew up by the roadside any more. Grownup picnic choices are champagne (of course) and Pimm’s. Mix one part Pimm’s No. 1 to three parts fizzy lemonade, garnish with mint, borage flowers and slices of strawberry, orange and cucumber for a drink that may taste nonalcoholic but decidedly isn’t.