Loving the Life at Ightham Mote 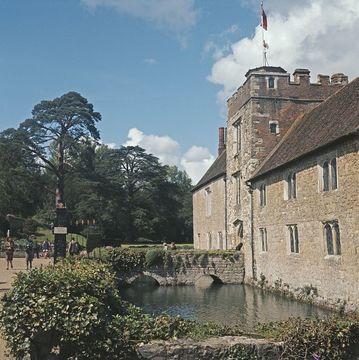 There is a sparkle in Bernadette Gillow’s eye as she takes me on a tour around this medieval moated manor house. Such a building with a fascinating story set in a beautiful location, I can well imagine many—if not most—of its visitors dream about what it would be like to call this place home.

Unknown to the flocks of visitors around us, Gillow is living that dream. She is an ordinary person in extraordinary surroundings, the current lady of the manor by virtue of her job as the house’s National Trust manager.

Ightham Mote, a picturesque, timber-framed manor surrounded by water, nestles close to Kent’s western borders with Surrey and Greater London. The oldest part of the house was constructed by the Haute family in 1320. It was extended a century or so later, enclosing a central courtyard. Since then, the house has passed through many hands, including those of Robert Clement, courtier to Henry VIII. It was bought by the Selby family in 1591, the Colyer-Fergusson family in 1889 and, finally, American bachelor businessman Charles Henry Robinson in 1953.

“It’s a family home that has been lived in continually since 1320,” Gillow explains. “Mr. Robinson died in 1985 and the National Trust was willed the property. There have only been two Trust property managers since then—I’m the second—which is a real tribute to the house and its special nature. Nobody wants to leave!”

Part of Ightham Mote’s charm is that throughout its long history it was not owned by a person of enormous wealth. If it had been, then it’s likely that the house would have been torn down and rebuilt as its current owner demanded. Instead, the house was altered gradually; one small alteration here, a slight modification there. The result is like an onion: you can peel back the layers of history and discover something older underneath.

Our tour of the house neatly encompasses the long life of the building. It begins in the medieval Great Hall, complete with suits of armor and an open fireplace; you can imagine the feasts that went on here. However, it became too cold and uncomfortable for the occupants. Following rooms reveal successive generations’ attempts to improve the building and add creature comforts: the exquisite painted decoration on the ceiling in Robert Clement’s Tudor chapel, the fashionable drawing-room fireplace demanded by Dame Dorothy Selby and the formal lounge in which the Colyer-Fergussons relaxed at the turn of the 20th century. The tour ends in Robinson’s library, laid out as he left it in 1985. 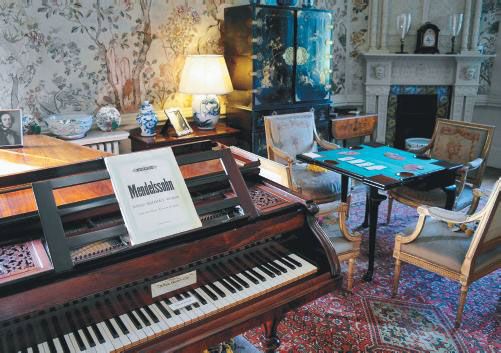 Ightham Mote’s current resident moved to the house in 1997. “I saw an advert for a National Trust property manager in the newspaper,” Gillow reveals. “I had a background in history, working in museums in London. But I’d only joined the National Trust a few months before when I visited Calke Abbey—and the only reason I joined then was because I didn’t have the entry fee and they didn’t take credit cards at the entrance!”

Gillow was called to interview, but still she didn’t see herself as the next resident of Ightham Mote. “I didn’t expect to get the job. I remember tottering around in high heels, thinking that I’d need to buy some wellies!”

It wasn’t just wellies required when Gillow first arrived—a hard hat was vital, too. Ightham Mote was in the middle of a huge renovation project that lasted 15 years. Over that time, successive wings of the building were closed, stripped out and rebuilt from scratch.

It was certainly necessary—the house was gradually crumbling and would not have lasted many more years without a serious structural failure. What was perhaps not necessary was the astonishing attention to detail. As the house was dismantled, archaeologists found Victorian paneling covering Tudor and medieval decorations. When it was put back together, everything was rebuilt exactly as it was—even if that meant covering up the older, unseen phases with more modern ones again. Ightham Mote remains an accurate reflection of the house that was given to the National Trust in 1985, only now it’s not an accurate reflection that is likely to collapse.

The massive project cost £10 million, only ending in 2004, seven years after Gillow first took up residence. Even so, it’s something that she wouldn’t have missed out on.

Even though London is within an hour by train, there is no doubt that Ightham Mote is a rural idyll, surrounded by woodland and fields. It was something of a culture shock to Gillow, who had moved from the bright lights of the capital.

“I was too used to life in London,” she said, “having a shop around the corner that was open 24 hours a day and so much happening on your doorstep. Suddenly I was living in the country and that all seemed so far away, but I quickly fell in love with the place. Ightham Mote really gets under your skin.”

The lack of convenient shopping was not the only thing that she had to get used to. “When I first arrived, things were quite quaint. Female staff and volunteers were not allowed to wear trousers. That quickly changed! In the last few years, the National Trust has really modernized. It’s much more modern and open to new ideas.” Gillow really does live within the walls of the medieval manor house. It’s not obvious that somebody beds down here—just a few polite signs remarking that an area is off-limits or an occasional lock on a door barring entry. Yet behind that door in the butler’s pantry is Gillow’s 21st-century office, and overlooking the moat are the bedroom, kitchen and living space that she shares with her husband.

“We initially lived in Mr. Robinson’s old bedroom, now we have moved to an apartment on the upper floor,” she said. “It can get pretty cold because the house was built in 1320; there are draughts and creaky corridors throughout. We often open the windows to keep warm! But we don’t lack for mod-cons. We have a washing machine and everything else you’d expect in a modern house—there is a clear line between the show rooms and the modern living quarters.”
Gillow’s husband isn’t part of the National Trust staff, although he is another willing volunteer. “My husband loves the outdoors, she said. “He’ll often be found fishing or walking the local area. He leads fishing days in the moat.”

And the National Trust got more help when Gillow’s stepdaughters lived in the house. “My stepdaughters were 10 and 14 when they moved in,” she explained. “They got involved, helping with the dressing-up and activities for children; then working in the café when they were old enough. It’s certainly a novelty telling people where you live. The girls used to have their friends over a lot!”

An Easy Visit to Make

Getting there: The train from London Victoria to nearby Borough Green should take about 40 minutes; then you’ll need a four-mile taxi ride to the property.

Hours and admission: The estate is open seven days a week. Find opening times, prices, and special events on the National Trust website: (www.nationaltrust.org.uk/ightham-mote). You can also watch a short introductory video about the manor featuring Bernadette Gillow.

They were princesses in their own medieval palace, playing (carefully, no doubt) in a priceless historic space—they must have been the luckiest girls in kent! They have since grown up and moved on, but Gillow remains as passionate as ever. You need to be in this job.

“I have a team of 26 staff members and over 400 volunteers,” she explained. “My main job is to oversee the smooth running of the team, meeting with people and making sure that everybody is happy. Some days are office-based, looking at the business side of things—it’s a fact of life that a property like this has to make money so it can be ploughed back into conserving it.”

However, Gillow’s favorite part of the job is clear. “I like to keep my hand in with the tours, talking about Ightham Mote with visitors. It’s a pleasure and privilege to be working in a field that I love.”

Living in the place that you work is not always ideal, even if it’s as breathtaking as Ightham Mote. There’s the pressure of always being on-call, and never being able to get away.
“You have to lead from the front,” Gillow agrees, “from being in your pajamas at 3 a.m. setting the alarm to making sure that the car park isn’t blocked up. It’s not really a 9 to 5, Monday to Friday job; it’s all-consuming. You get drawn into events and whatever is happening on site, but you need to be disciplined. You need a life outside work. My husband is pretty good at making sure I do that!”

For all the inconveniences and hard work, there are the things that make it all worthwhile.
“It’s nice to share Ightham Mote, but it’s also nice to have it to myself at the end of the day. My office is on the other side of the house to my apartment, so I walk through it each evening, closing down the house—then it feels like my own.”

Gillow is the latest in a long line of residents of Ightham Mote. Her job has brought her to live in a wonderful location and the visitors who say that they could imagine living in Ightham Mote would be green with envy if they knew that she did. Yet it’s a good thing that she does—the National Trust has preserved Ightham Mote for us all to enjoy. As Gillow said, “Mr. Robinson said that nobody can own a house like this. You just look after it for the next generation.”