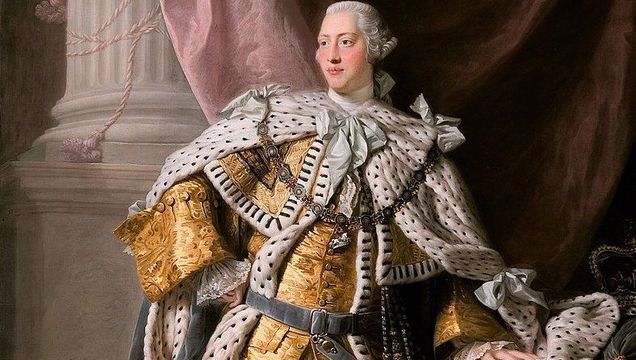 A portrait of King George II on his coronation day, by Allan Ramsay.Google Art Project / Art Gallery of South Australia.

George III was born on 4 June 1738 in London, the eldest son of Frederick, Prince of Wales, and Princess Augusta of Saxe-Gotha

He became heir to the throne on the death of his father in 1751, succeeding his grandfather, George II, in 1760. He was the third Hanoverian monarch and the first one to be born in England and to use English as his first language.

George III is widely remembered for two things: losing the American colonies and going mad. This is far from the whole truth.

George's direct responsibility for the loss of the colonies is not great. He opposed their bid for independence to the end, but he did not develop the policies, such as the Stamp Act of 1765 and the Townshend duties of 1767 on tea, paper, and other products, which led to war in 1775-76 and which had the support of Parliament.

These policies were largely due to the financial burdens of garrisoning and administering the vast expansion of territory brought under the British Crown in America, the costs of a series of wars with France and Spain in North America, and the loans given to the East India Company (then responsible for administering India).

By the 1770s, and at a time when there was no income tax, the national debt required an annual revenue of £4 million to service it.

The declaration of American independence on 4 July 1776, the end of the war with the surrender by British forces in 1782, and the defeat which the loss of the American colonies represented, could have threatened the Hanoverian throne.

Read a letter by George III on the loss of America
However, George's strong defence of what he saw as the national interest and the prospect of long war with revolutionary France made him, if anything, more popular than before.

The American war, its political aftermath and family anxieties placed great strain on George in the 1780s. After serious bouts of illness in 1788-89 and again in 1801, George became permanently deranged in 1810.

He was mentally unfit to rule in the last decade of his reign; his eldest son - the later George IV - acted as Prince Regent from 1811. Some medical historians have said that George III's mental instability was caused by a hereditary physical disorder called porphyria.

George's accession in 1760 marked a significant change in royal finances. Since 1697, the monarch had received an annual grant of £700,000 from Parliament as a contribution to the Civil List, i.e. civil government costs (such as judges' and ambassadors' salaries) and the expenses of the Royal Household.

In 1760, it was decided that the whole cost of the Civil List should be provided by Parliament, in return for the surrender of the hereditary revenues by the King for the duration of his reign.

The first 25 years of George's reign were politically controversial for reasons other than the conflict with America. The King was accused by some critics, particularly Whigs (a leading political grouping), of attempting to reassert royal authority in an unconstitutional manner.

In fact, George took a conventional view of the constitution and the powers left to the Crown after the conflicts between Crown and Parliament in the 17th century.

Although he was careful not to exceed his powers, George's limited ability and lack of subtlety in dealing with the shifting alliances within the Tory and Whig political groupings in Parliament meant that he found it difficult to bring together ministries which could enjoy the support of the House of Commons.

His problem was solved first by the long-lasting ministry of Lord North (1770-82) and then, William, from 1783, by Pitt the Younger, whose ministry lasted until 1801.

George III was the most attractive of the Hanoverian monarchs. He was a good family man and devoted to his wife, Charlotte of Mecklenburg-Strelitz, for whom he bought the Queen's House (later enlarged to become Buckingham Palace). They had 15 children, 13 of whom reached adulthood.

However, his sons disappointed him and, after his brothers made unsuitable secret marriages, the Royal Marriages Act of 1772 was passed at George's insistence. (Under this Act, the Sovereign must give consent to the marriage of any lineal descendant of George II, with certain exceptions.)

Being extremely conscientious, George read all government papers and sometimes annoyed his ministers by taking such a prominent interest in government and policy.

His political influence could be decisive. In 1801, he forced Pitt the Younger to resign when the two men disagreed about whether Roman Catholics should have full civil rights. George III, because of his coronation oath to maintain the rights and privileges of the Church of England, was against the proposed measure.

One of the most cultured of monarchs, George started a new royal collection of books (65,000 of his books were later given to the British Museum, as the nucleus of a national library) and opened his library to scholars.

In 1768, George founded and paid the initial costs of the Royal Academy of Arts (now famous for its exhibitions).

He was the first king to study science as part of his education (he had his own astronomical observatory), and examples of his collection of scientific instruments can now be seen in the Science Museum.

George III also took a keen interest in agriculture, particularly on the crown estates at Richmond and Windsor, being known as 'Farmer George'.

In his last years, physical as well as mental powers deserted him and he became blind.

He died at Windsor Castle on 29 January 1820, after a reign of almost 60 years - the third longest in British history. His son, George IV - who had been Prince Regent since 1811 became King.

* This article was originally published by Royals.uk