Swash and Buckle at Warwick 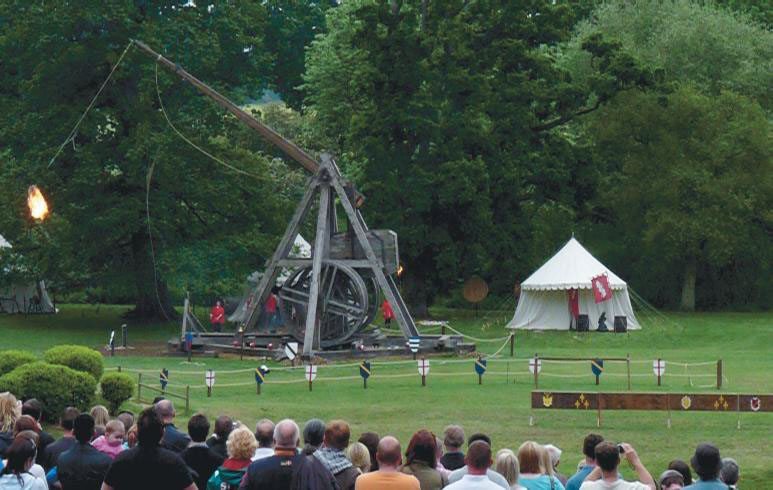 One of England’s most historic medieval castles is a bustling, noisy theme park these days 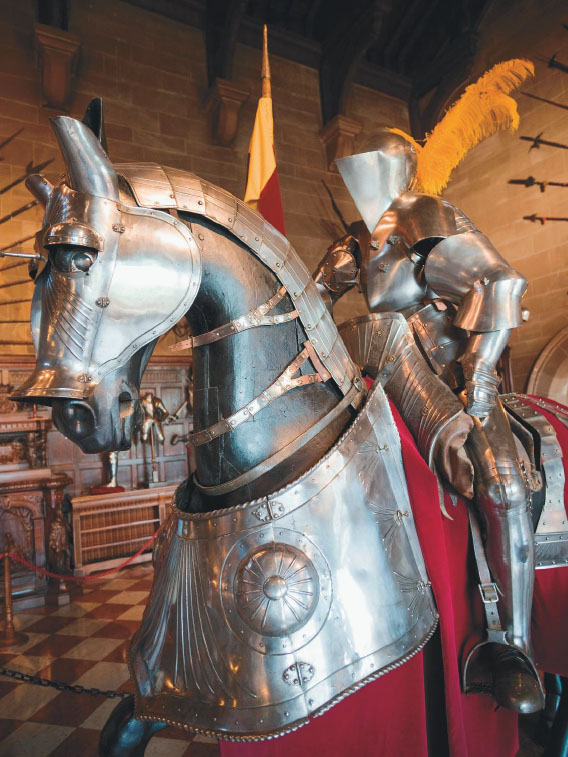 In the Great Hall, a display of armor for knight and horse recalls Warwick Castle’s years as a military fortress.[/caption]

Ancestral home of the Earls of Warwick, Warwick Castle is one of the most historically important castles in the kingdom. It is also the most complete medieval castle in Britain, the very model of 14th-century military architecture. Not surprisingly, then, Warwick Castle has long been among the most popular castle visits in England. While visitors might throng to Dover Castle or Caerphilly, Edinburgh or Conwy for their history and the evocation of the lost medieval world, however, Warwick Castle today is a great medieval theme park.
Back in the Norman glory days of yore, Warwick was such an important earldom that not only the castle, but the town and the county received their names as well. Oh, its history and its magnificent 14th-century fortifications are present in all their glory. It’s just sometimes hard to see these days.
The original castle was started by William the Conqueror in 1068. Over the next few centuries, the castle was rebuilt and its fortifications extended several times. After its functional usefulness as a military base had passed, the Greville family, Earls of Warwick since 1759, converted it to a seat of formidable social power instead. 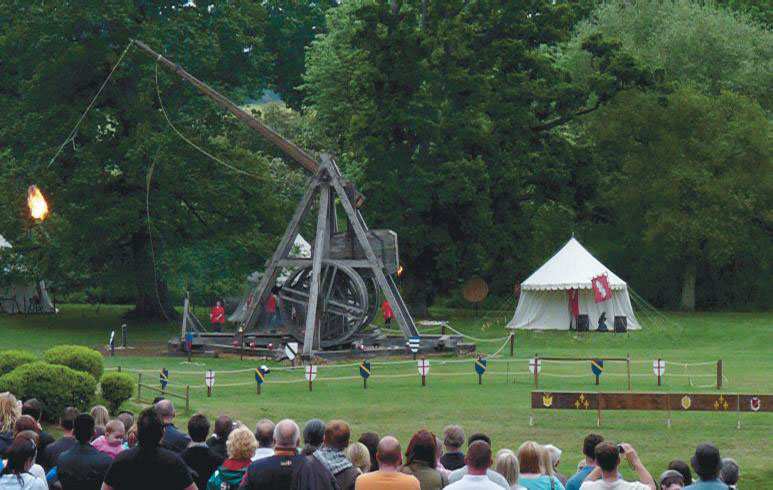 
Down on the river-bank, the daily firing of Warwick’s trebuchet is always a popular attraction with visitors. One of the world’s largest siege engine, the trebuchet’s counterweight weights seven tons. The catapult can accurately hurl a 300-pound projectile 80 feet in the air more than 300 yards—at a speed of 150 mph.

Unlike the popular castles that are still in the care of their hereditary families, or those maintained for the public trust by English Heritage or the National Trust, Warwick Castle was purchased from the family in 1978 by Madame Tussaud’s, and, indeed, operates as what can only be described as a family theme park. While this sounds a little disconcerting, it is hard to argue with what works.
Throughout the year, families throng to Warwick Castle just as they might to Disneyworld or Six Flags. After all, where are you going to find a real, historic castle complete with jousting and falconry, demonstrations of period artillery such as their celebrated trebuchet, and, opportunity to shoot half a dozen arrows at a target for three pounds or pour slops from a gallery for a couple quid more.
William the Conqueror had a plan and the Tussaud Group followed it; Warwick has a strategic location in the heart of the Midlands. Easily accessible from both London and Birmingham, its present address is Junction 15 on the M40.
Through the castle gates, the curtain walls enclose acres of well-maintained formal gardens and manicured Capability Brown parkland on the River Avon. The broad lawns and summer houses are staging areas for entertainments, encampments of tents, games and a kaleidoscope of concession stands. Enter into the courtyard of the old bailey, and perhaps take a walk on the defensive 14th-century curtain wall through Caesar’s and Guy’s Towers. They do warn you that there are some 500 uneven stone steps along the way.
Colorful characters in medieval period costume wander the grounds under various guises, and the smell of post-medieval hamburgers wafts from one of many booths offering food and drink. Buy the little ones a lightweight wooden sword and a bit of plastic armor. 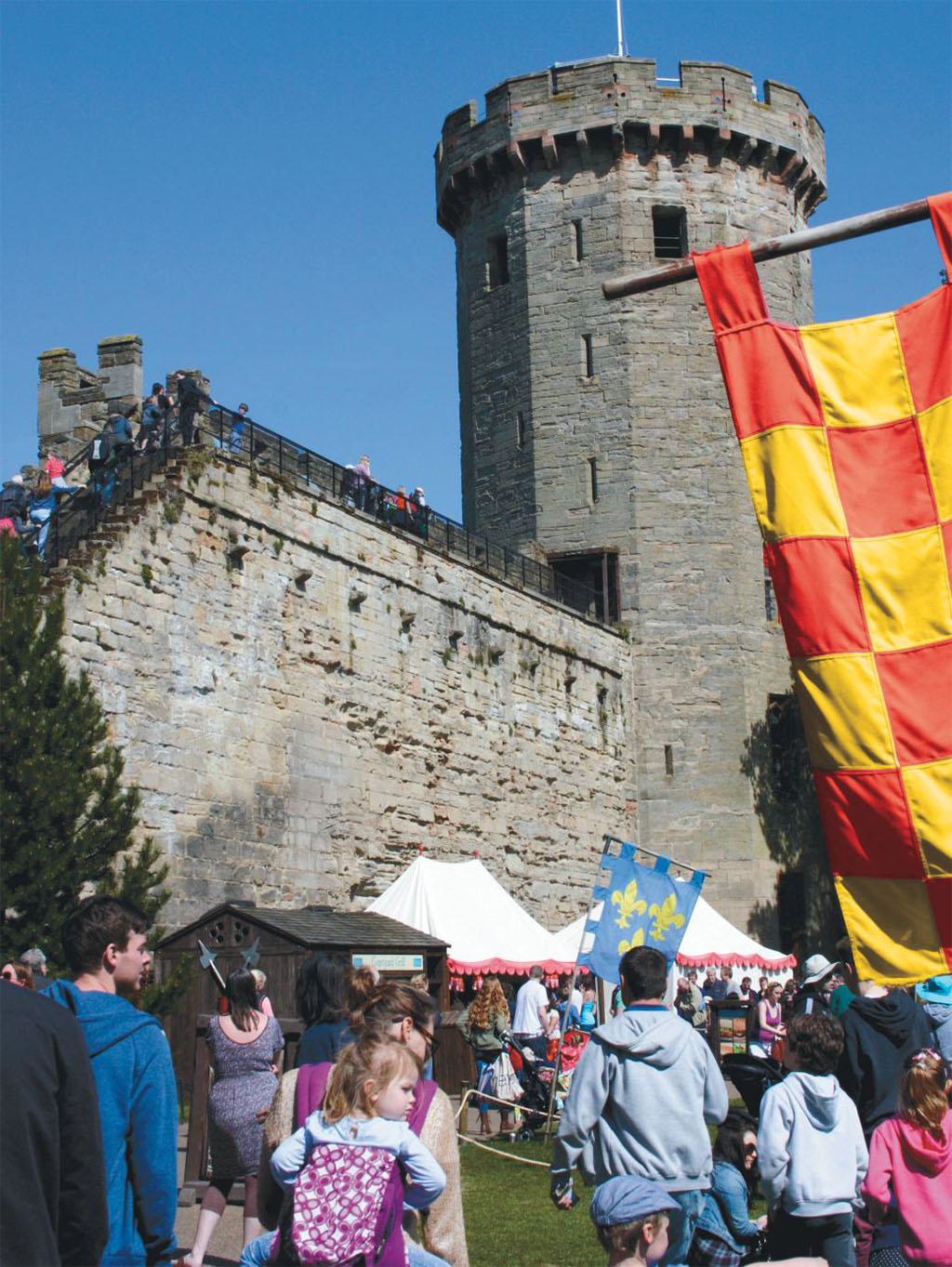 They do warn visitors that a walk of the curtain wall through Caesar’s and Guy’s Towers includes 500 uneven stone steps.[/caption] 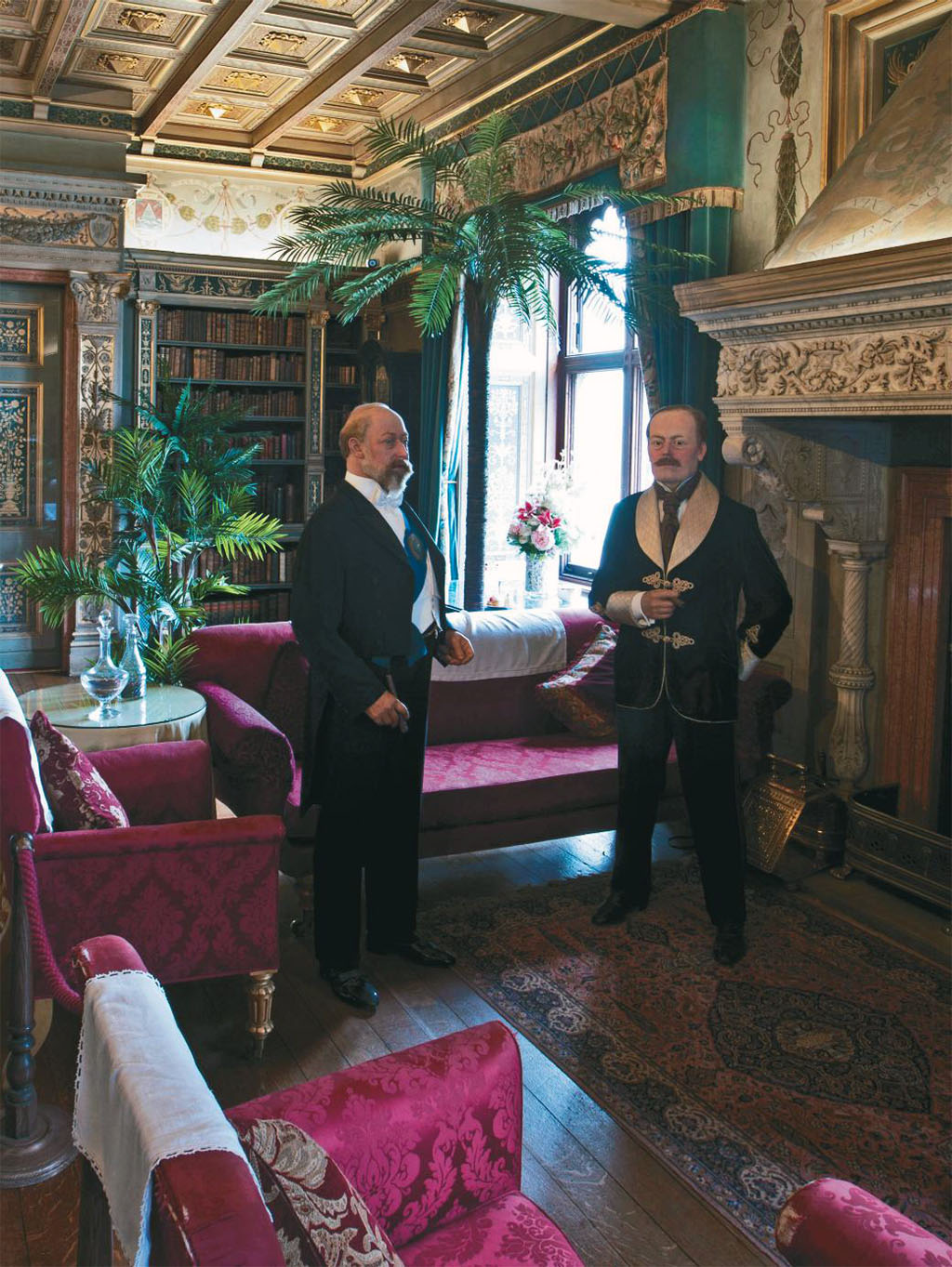 The Prince of Wales chats with the Earl of Warwick over cigars in the salon during the Royal Weekend house party.[/caption]

CERTAINLY THE MOST politically dramatic of the castle’s residents over the generations was Richard Neville, the 14th Earl. Neville got the title through his wife’s inheritance after almost 200 years of Beauchamp earls. The Beauchamp chapel in the Collegiate Church of St. Mary in town contains generations of their tombs.
Known to history as “The Kingmaker,” Neville swashed and buckled his way across 20 years of the Wars of the Roses. Neville threw his considerable military weight behind first the Yorkists, then the Lancastrians, and finally met his end commanding Lancastrian forces for King Henry VI at the Battle of Barnet in April 1471. The Lancastrian defeat and death of Neville secured the Yorkist King Edward IV on the throne.
The castle’s best re-creation of its history is the exhibition called Kingmaker. The castle undercroft is given to depicting the Earl, his retainers and virtually the entire castle garrison engaged in preparation for battle. In the 15th century, going forth to what would be the Battle of Barnet involved concerted efforts, from the fetching of arrows to the polishing of arms—and the making of wills.

LIKE SUCH PALACE FORTRESSES as Arundel Castle, Berkeley Castle and Alnwick Castle, Warwick remained a noble residence, the seat of an ancient title, through the centuries. The original military stronghold and seat of power had to evolve in form and function as lifestyles of the rich and powerful changed with the times.
The best displays at Warwick Castle play to Madame Tussaud’s waxwork strength. The Royal Weekend house party is in the portion of the castle that was the aristocratic residence. It depicts an actual Victorian house party at Warwick in 1898, hosted by Frances, Countess of Warwick, where the principal guest was the Prince of Wales, later King Edward VII. A dozen salons and bedrooms are alive with the guests—including a young Winston Churchill reading a book in the library.

THOUGH THE PRESENT corporate entity at Warwick is Merlin Entertainments, the maintenance and preservation of the castle is not overlooked. As a Grade I-listed complex and Scheduled Ancient Monument, the property is well cared for. For heritage travelers such as British Heritage readers, that some portion of the considerable admission charge supports that cause is a consolation. Though there are various deals, the £30 adult admission takes a bite after a hefty parking charge. And if you want to take a bite or beverage, prices are those of a theme park, not a fast food outlet.

The Castle and Environs

6
Easily accessible from both London and Birmingham, the castle’s present address is Junction 15 on the M40. Admission prices and daily event schedules are at www.warwick-castle.com.

IN THE NEIGHBORHOOD: Just beyond the castle walls, Warwick is a warm, welcoming market town. There are plenty of café, restaurant and pub choices, as well as hotel and inn lodgings. Out by the motorway, there are several modern hotels. You can get good views and pictures of Warwick Castle from down near the river. The rather more peaceful ruins of Kenilworth Castle lie six miles up the road, and Shakespeare’s Stratford-upon-Avon a dozen miles south toward The Cotswolds.

For a young family wanting to indulge in optional activities, lunch and snacks and a few take-home souvenirs, a day at Warwick Castle would be expensive entertainment. On the other hand, if Junior and Julie come away from the experience with a real appreciation of times past and an enhanced curiosity for history, it is a day well spent. In fact, visitors have been finding it so since the 1800s, much as visitors described by Sandra Lawrence in Jane Austen’s day. As early as 1900, the Earl had set up a ticket office and hired a guide.
Our images and expectations of castles are of windswept ruins on the shores of Loch Ness, of silent stone sentinels overlooking the market town or of grand Edwardian dining rooms repurposed from the old Great Hall. In fact, in their heyday, Britain’s castles were bustling, colorful, noisy places probably more closely resembling Warwick today (if not so clean and tidy) than the romantic ruins of castles like Harlech and Middleham. Seriously avoid school holiday weeks, but don’t avoid Warwick Castle. This is a good visit, with or without kids. Kitschy souvenirs optional.