The Making of the Pilgrims 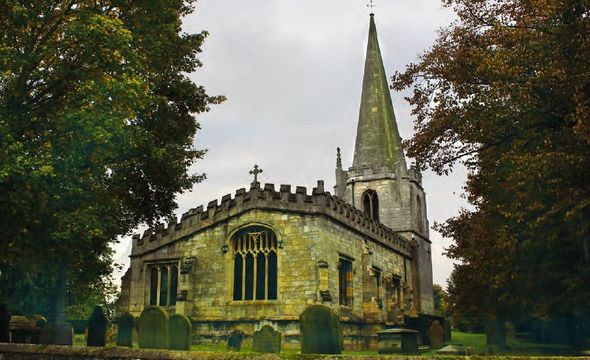 From obscure farming villages to the shores of New England


When King James I, already King of Scotland, inherited the English throne in 1603 following the death of Queen Elizabeth I, English Puritans and Dissenters rejoiced. With the crown passing to the Protestant head of a Presbyterian country, which had resisted episcopacy in Scotland, surely their days of forced conformity to an Anglican Church that maintained many of the trappings of Catholic worship and hierarchy would be over. They wasted no time.

On King James’s way to London, he was presented with a petition signed by 1,000 Puritan clergymen from across England detailing their objections to the Romanist practices of the Anglican Church. At the Hampton Court Conference in January 1604, what is known as the Millenary Petition was deliberated. Most of its grievances were rejected out of hand by the King and the aristocratic top of the Episcopal hierarchy. What the King did authorize, however, was a new, uniform translation of the Bible into vernacular English. Published in 1611, we know the result as the King James Bible. There was another result of the conference.
Over the next couple of years, some 300 of the most obdurate Puritan vicars were removed from their livings and their churches. Among those was Richard Clyfton, rector of All Saints Church in the village of Babworth, on the western edge of Nottinghamshire, who was suspended in 1605. His congregation went with him. From early 1606, the Calvinist dissenters met for worship in the nearby village of Scrooby at the ancestral manor home of the local gentry, William Brewster. 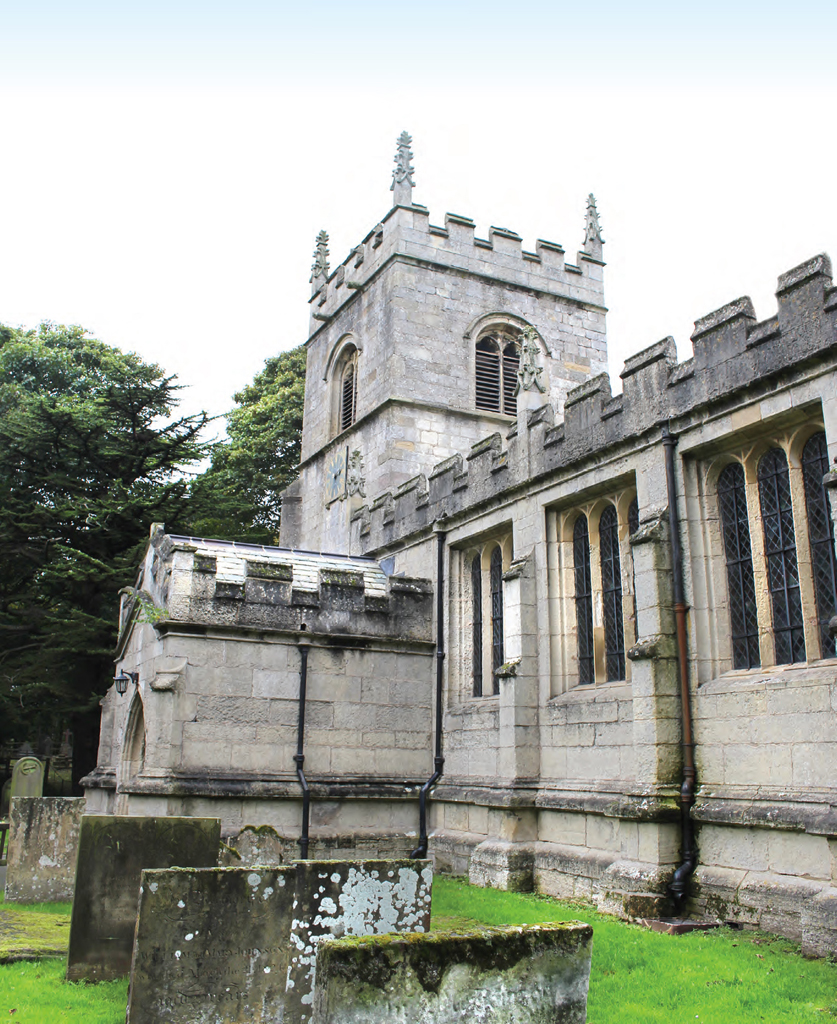 Tucked in a grove down a quarter-mile dirt lane, All Saints Church in Babworth, Nottinghamshire, was the seedbed of the Pilgrim congregation.[/caption]

Brewster had attended Peterhouse, Cambridge and in 1584 entered the service of William Davison, Queen Elizabeth I’s Secretary of State. He served as diplomatic adjutant to Davison on several missions to the Netherlands. When Davison fell from favor, Brewster returned to Scrooby Manor and assumed his father’s position as regional postmaster and bailiff for the Archbishop of York. In both Cambridge and the Netherlands, Brewster absorbed Reformed theology and the congregational ethos. When Clyfton and his parishioners abandoned Babworth church in 1605, Brewster invited them to gather at Scrooby Manor—right across the street from St. Wilfrid’s village church, where Brewster himself was baptized and had regularly worshipped.

“We are all, in all places, strangers and pilgrims”
Inscription in Robert Cushman’s Bible

In the larger market town of Gainsborough, a dozen miles east and just over the Lincolnshire border, a Separatist group had been meeting at Gainsborough Old Hall at the invitation of its owner, Sir William Hickman. Their pastor was John Smythe, deposed by the Bishop of Lincoln from his Lincoln church, who had come to Gainsborough in 1603. His congregation of some 70 came from villages throughout a 15-mile radius. When Brewster invited Clyfton to Scrooby Manor, those from Scrooby and several eastern villages joined the religious refugees from Babworth. Among them was a young William Bradford of Austerfield.
Meanwhile, just a few miles to the southwest in Sturton le Steeple, John Robinson had also lost his church because of his Puritan convictions. Many of his congregation merged with the Gainsborough Separatists. Subsequently, Robinson himself assumed the office of Teacher of the Scrooby congregation; Richard Clyfton remained Preacher; William Brewster the lay Elder. Puritan dissenters had become congregational Separatists.
Under King James I’s dictates, it was illegal not to attend regularly the local established Church of England. William Brewster’s own refusal to worship with the Anglican Church was bound to attract attention. He was the only one of the Pilgrims who had a diplomatic and political background. Brewster lost his job as postmaster. He and others were imprisoned and fined in York. Families were spied upon and their homes raided. Others lost their livelihoods. At both Scrooby and Gainsborough, in 1607 the Separatists made plans to leave England and began to sell their belongings. 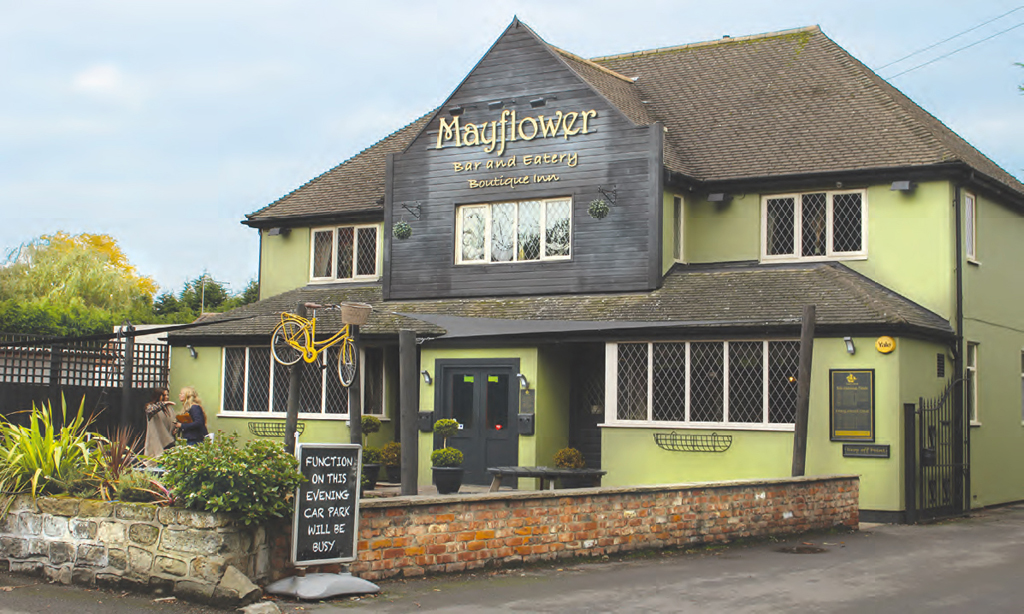 Austerfield’s bistro, as well as the village signboards, commemorate the small farming community as the birthplace of William Bradford.[/caption]

The planned escape of the Scrooby congregation in November was betrayed on the banks of the River Witham near Boston. That part of the story we told a few issues ago (see “Boston’s Part in the Pilgrims’ Story,” July/August 2016). In early 1608, Smythe and some 40 of the Gainsborough congregation simply disappeared. It is not known how they got there, but the group emerged in Amsterdam and joined a community of 300 English Separatist émigrés in that city where the Dutch Reformed Church was sympathetic. 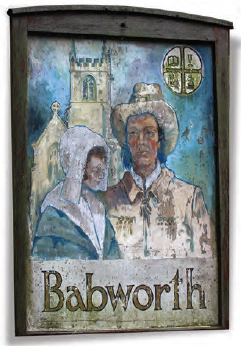 When the Scrooby folk led by Brewster, Robinson and Clyfton made their successful flight later in the year, they landed first and were welcomed by the expat community in Amsterdam. To maintain their own faith community, they ultimately settled 25 miles south in the city of Leiden. Once the congregation of roughly 100 arrived in Leiden, they elected William Brewster as their Ruling Elder. Over the next years, Brewster taught English at the University of Leiden and published religious tracts. Many of the group were weavers and worked at the looms producing wool, linen and fustian cloth. Life was not easy.
Of course, the close-knit church family did not stay in the Netherlands. As the next 10 years went by, the English religious migrants saw their children grow up in Netherlands society and realized that they could not maintain their English identity in a strange, and increasingly unwelcoming, land. Assimilation was inevitable. While some were happy to stay in their new home, in 1619 many in the congregation prepared to seek life in a new English homeland across the Atlantic.
Deacon John Carver and Robert Cushman were deputized to London to make arrangements. There, they negotiated rights with the London Company and chartered Mayflower and Speedwell for the famous transatlantic crossing in 1620.
In the end, only 35 members of the Separatist exiles were aboard Mayflower by the time it sailed. John Robinson remained in Leiden to pastor the larger group remaining. He died in 1625. Over the next few years, many of those left in Leiden joined their friends and families in Plymouth Colony, and the English community in the Netherlands gradually disappeared. 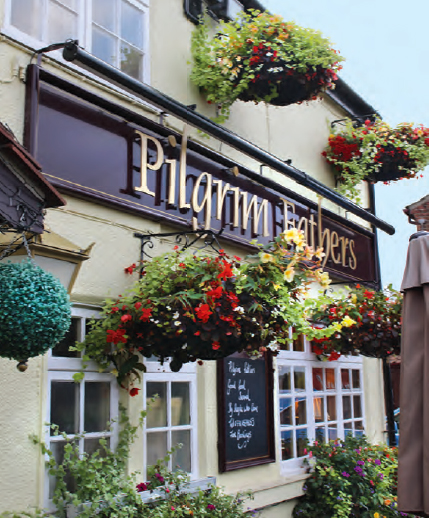 Richard Clyfton was an old man when the group landed in the Netherlands. He remained in Amsterdam and died in 1616. Mayflower sailed with John Carver as the appointed governor of the new settlement and William Brewster the Ruling Elder. Also aboard was William Bradford, who became a leader in the New World colony for 30 years, governor and author Of Plymouth Plantation. The phrase in Cushman’s Bible is attributed to Bradford.
“We are all, in all places, strangers and pilgrims.”
The small community of committed Believers that began in a Nottinghamshire farming village had become the Pilgrims.


Today the sites associated with these early Separatists are gathered as “The Mayflower Trail,” with informational signboards along the way. The village churches of Babworth, Scrooby and Sturton le Steeple are often open. A part of Scrooby Manor still stands and is a residential farmhouse in private hands. One of the most complete medieval manors in England, Gainsborough Old Hall is owned by English Heritage and depicts its 17th-century role as a haven of the Separatist congregation that met there.
experiencenottinghamshire.com/mayflower-pilgrims