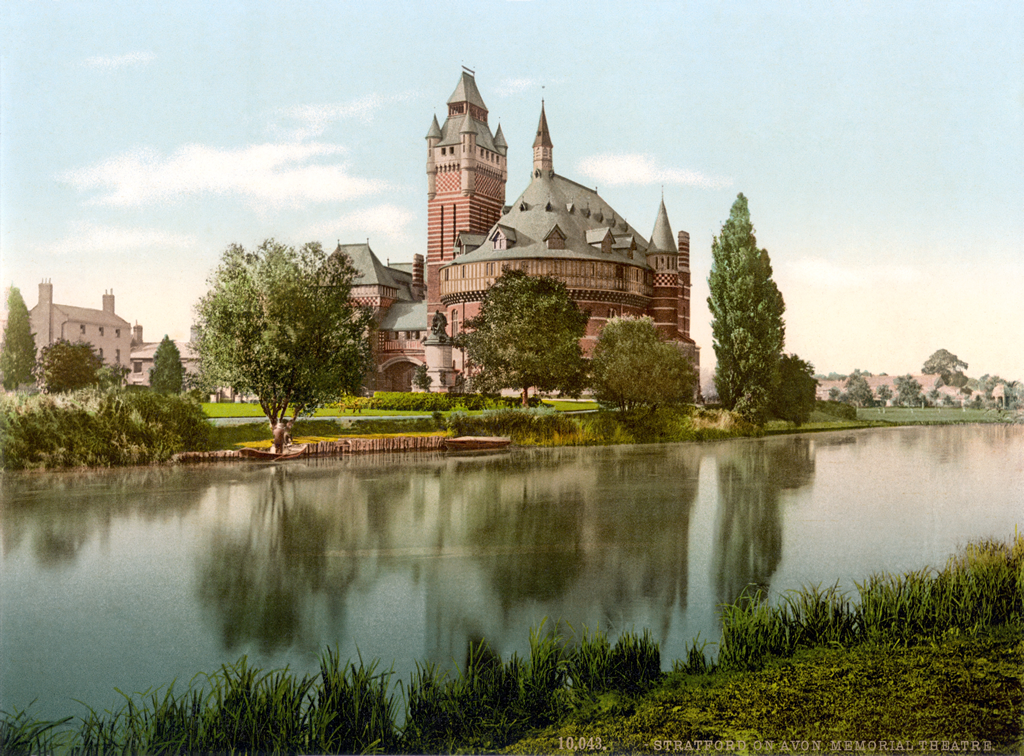 There is much ado about the Royal Shakespeare Company these days as it affirms its mission to itself and to the theatrical community, builds a new theater to replace the one it has performed in at Stratford-upon-Avon since 1932 and once again presents a regular season in London. Overcoming a period of artistic and financial woes in the 1990s, the RSC has rediscovered its original mandate to keep the works of William Shakespeare alive for modern audiences through an ensemble company of actors.

In recent years the ensemble concept, where a group of artists (actors, directors, writers) works closely together over several seasons with everyone having input into the play, had fallen out of favor with artists as well as audiences. However, Vikki Heywood, executive director of the RSC since April 2004, says there is now a “return and acceptance of a core group, which allows audiences to follow the same actors in a number of repertoire productions while at the same time providing an outstanding training ground for the artists.”

The Royal Shakespeare Company still welcomes well-known actors into its productions. Heywood emphasized, however, that even the biggest names will have to partake in all the activities and training regimens of the ensemble though their stay with the group might be for just a few months. “Everyone in the Company, from directors, actors and writers to production, administrative, technical and workshop staff will all collaborate in the RSC’s approach to theater,” said Heywood.

One of the most famous theater groups in the world, the RSC dates back to the late 19th century although it has been operating under its present name since only 1961. In 1875 Charles Edward Flower, a brewer living in the town where Shakespeare was born, Stratford-upon-Avon in rural Warwickshire about 90 miles northwest of London, donated a two-acre site so that a theater could be built there.

The Shakespeare Memorial Theatre opened in 1879 with the playwright’s Much Ado About Nothing as its first production. Initially, the theater’s season was only eight days in the spring; a monthlong summer season was added in 1910. The theater was destroyed by fire in 1926, but was rebuilt and opened in 1932 by the Prince of Wales, later King Edward VIII, on Shakespeare’s birthday, April 23. It won critical acclaim, and its actors became a definitive Who’s Who in the theater world and included such names as Michael Redgrave, Ralph Richardson, John Gielgud, Peggy Ashcroft, Vivian Leigh and Laurence Olivier.

In 1960 artistic director Peter Hall, then 29 and in the early years of what would be a brilliant career in the theater, founded the modern Royal Shakespeare Company. In 1961 the Shakespeare Memorial Theatre was renamed the Royal Shakespeare Theatre, home of the RSC. It expanded its repertoire to include other classical playwrights and more modern works. Young actors who would go on to have illustrious stage careers joined the Company, and playbills regularly contained the names of players such as Maggie Smith, Judi Dench, Paul Scofield, Richard Griffiths, Jonathan Pryce and Zoe Wanamaker.

Hall believed in the core ensemble and under his leadership created a new golden era for the RSC that brought it renewed fame and status. Upon Hall’s departure in 1968 to head the Royal National Theatre, Trevor Nunn, 27, was appointed the RSC’s director. Over the next 18 years, Nunn led the Company with great artistic vision. In 1982 he guided it into its new London home at the Barbican Theatre, which was especially designed for the RSC. Nunn also realized his dream of a smaller theater at Stratford-upon-Avon when the Swan Theatre opened in 1986.

By the time Michael Boyd was elevated from an associate director’s position at the RSC to artistic director in July 2002, the Company had serious financial problems, seemed to have lost its artistic vision and found itself without a home base in London. In the past five years, Boyd has worked to return the Company to the ensemble concept, with intensive physical and vocal training workshops for all the artists, along with lavish rehearsal time for each production.

Boyd displayed the Company’s commitment to turning things around with the recent production and performance at Stratford-upon-Avon of all 37 of Shakespeare’s plays over the course of a yearlong festival that began on April 23, 2006. Some of England’s major actors stepped into the ensemble for this project and switched from one role to another in the Company’s repertoire. Patrick Stewart appeared as Antony in Antony and Cleopatra as well as Prospero in The Tempest. Ian McKellan had the title role in King Lear and a smaller part in Chekhov’s The Cherry Orchard. Judi Dench returned to the Company after an absence of many years to play Mistress Quickly in a new musical version of The Merry Wives of Windsor. A number of these productions will transfer to the Royal Shakespeare Company’s London home, and to the United States during the 2007-08 season.

One of the most exciting and controversial ventures for the RSC is its plan to replace the 1932 theater on the banks of the River Avon in Stratford. On April 19, 2007, the Company announced that it had secured approximately $200 million for the redevelopment of its theaters in Stratford-upon-Avon. Although there are some in the theater world who do not want to see the 1932 venue demolished, others have stressed that the new theater will be more in keeping with the type of auditorium where Shakespeare’s plays were originally performed.

The new main theater will be a modern version of a courtyard theater from Shakespeare’s time. It will have a thrust main stage with seating for 1,000 on three sides; the relationship between the audience and the actor will be a more intimate one than in the theater it replaces. Unlike the present Royal Shakespeare Theatre, which has a large proscenium arch stage and rather poor sightlines from a number of seats, the new theater will have seating that brings every member of the audience closer to the stage.

While the construction is in progress, the smaller Swan Theatre—an indoor version of an Elizabethan theater that is built into the side of the Royal Shakespeare Theatre—will be temporarily closed. For the next few years, audiences in Stratford-upon-Avon will view plays in the temporary Courtyard Theatre, created especially for this interim period. Among the many rave reviews of the Courtyard Theatre, the Financial Times said that the theater is “at once more loved than most theatres are after decades.” The RSC’s executive director, though, seems definite that the Courtyard Theatre will have to be dismantled when the new theaters are ready. “Stratford would not be able to accommodate, keep up, two large theaters of the size of the new one being built and the Courtyard,” said Heywood.

Alas, without a car, travel to Stratford-upon-Avon for an evening performance is almost impossible without an overnight stay there, as train and bus service shut down late at night. While it is a pleasant overnight in Stratford, a charming town with lots of restaurants, pubs and shops as well as pretty villages nearby, the RSC recognizes the need for better late-night transportation. It is talking with Stratford’s city council about improving transportation between the town and other cities in England. Apart from London, tourists flock to Stratford-upon-Avon more than any other destination in England.

Stratford-upon-Avon flourishes and thrives on Shakespeare’s birth there in 1564. After making a reputation for himself in Queen Elizabeth I’s London, the playwright returned to his hometown in 1610 and died in Stratford-upon-Avon in 1616. A number of sites associated with his life are open to the public and draw huge crowds each year, especially the half-timbered residence on Henley Street, where he was born and where his descendants lived until the 19th century.

Meanwhile in London, the Royal Shakespeare Company has an agreement with Cameron Mackintosh, the dynamic producer and the owner of seven legitimate theaters in London’s West End. The Company currently leases one West End theater each year from Mackintosh and will do so for the next several years, ensuring a regular London season. The RSC is optimistic that the arrangement with Mackintosh gives its theater a regular presence in London while it looks for a more permanent space—its own space—there. The Company is also attempting to attract younger audiences in London by making some of the best seats in the house available at £5 on the day of performance to those aged 16-25.

The Royal Shakespeare Company is not just about Stratford-upon-Avon and London but also the northern English city of Newcastle-upon-Tyne. Since 1977 Newcastle-upon-Tyne has provided a third home for the RSC—it transfers productions to theaters there for a regular season. The RSC productions are also regularly transferred from England to the Brooklyn Academy of Music in New York City and the Kennedy Center in Washington, D.C. History reveals that Shakespeare liked to take his own company, which was based in London, on tour to as many parts of England as possible. Today’s RSC is also trying to reach as many people as possible and is hoping to expand its travels around the world.

Aunique partnership was formed in 2001 with the University of Michigan in Ann Arbor. The Royal Shakespeare Company comes into residence on the college campus for several weeks each year to perform and to conduct educational activities for adults and children.

Realizing that it needs a regular presence in London and adamant about its artistic mission, the Royal Shakespeare Company is looking to the future. It has committed itself to connect with Shakespeare and to be defined by an ensemble. Now, under the leadership of Michael Boyd and Vikki Heywood and a well-trained ensemble of actors, the RSC is ready to enter into another remarkable age of theater. You could almost say that “all’s well that ends well,” except there is a lot of future ahead for the historic Royal Shakespeare Company as it continues into the 21st century.