Sea Cliffs of the North York Moors, where timeless fishing villages tumble to the shore 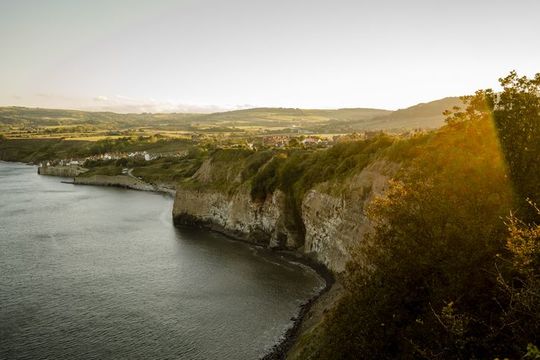 "Tiny villages shoehorn into niches in the cliffs, their painted stone cottages terracing up alleys formed by steps and sidewalks."

Over the millennia the North Sea has sliced off the eastern edge of the North York Moors with a knife, exposing its hard rocky core for all to see—33 miles of continuous pinkish-tan cliffs never less than 100 feet high and sometimes more than 600 feet. For the most part they are nearly devoid of settlement; empty grassland separates widely scattered farmsteads, the cliff-tops reachable only by the Cleveland Way long distance path.

Tiny villages shoehorn into niches in the cliffs, their painted stone cottages terracing up alleys formed by steps and sidewalks. Part of the North York Moors National Park since 1952, this line of cliffs and its villages remains in pristine condition.

There is one exception to the general emptiness of the cliff regions: Whitby, a crowded little town of 13,000 set in a river gorge that slashes through the halfway point of the cliffs. Its busy streets line a wide harbor and cut into the cliff-sides, cobblestone surfaces climbing past centuries-old cottages. Above it all sits the ruins of a medieval abbey, built to commemorate a much earlier abbey, where in 664 the British churches accepted Roman (rather than Celtic) rules. The original abbey was sited here as protection from Vikings, a failure as it turned out, as the 160-foot cliffs, although intimidating from the sea, could be easily scaled via harbor paths. Steps still climb the cliffs from the town center, while sand beaches stretch to its west under cliffs only slightly lower.

Whitby’s original site, chosen for protection against sea-faring freebooters while maintaining access to the sea, reflected an age when nearly all commerce was seaborne but governments were still too weak to protect either this commerce or its lesser ports-of-call. It was for this reason that the fishing village of Fylingdales was founded on the cliff-tops rather than the base where they kept their boats, a half-mile walk down 200-foot cliffs. Although the village’s medieval church remains at the old village’s location, the villagers felt safe enough by Tudor times to move right down to the cliff bottom, building their cottages in rocky shelves cut by a little beck.

They called their new settlement Robin Hood’s Bay, and told a story of how the Nottinghamshire hero had driven out the pirates and brought safety to the fisher-folk. They built solid stone cottages set into the cliff-sides around the harbor, reachable by a maze of stone paths and steps.

The sturdy construction of the cottages and village indicate a higher standard of living than you’d expect from people living off the sale of fish—a sign that the smuggling did not completely stop when the pirates left. There’s a pub and hotel by the harbor, several B&Bs, gift shops and tea rooms scattered about its middle terraces, and a wonderful local museum hidden way up on its highest shelf. The museum, set in a Victorian-era mortuary, is filled with local history memorabilia on shipping, fishing and smuggling, as well as the colorful banner of the Robin Hood and Little John Friendly Society. The cliffs, easily reached from the harbor-side pub, are noted for their fossils and rocky tidal pools. Access to the town is strictly by foot from the cliffs above.

To the northwest some 14 miles, the village of Staithes has a similar history and a similar situation. Here a tiny beck has cut a substantial canyon through the cliffs, and the fishing village climbs up its near-vertical south wall, and then jumps across the stream on a foot bridge to fill a narrow shelf beneath its north wall. The sizeable village contains seven restaurants and cafes (including three pubs) as well as gift shops and a gallery specializing in the work of the Staithes Group, artists who found inspiration here in the late 19th century.

As with Robin Hood’s Bay, the surrounding cliff bases are easily reached from the town center, and are known for their ammonite fossils, which resemble chambered nautiluses. Two miles to the west (along the Cleveland Way) are the Boulby Cliffs, at 660 feet the tallest in England. While you can drive into the village and drop someone off, you cannot park there; once again, you must park up the hill and walk down.

If you want to drive down the cliff to park in a village center, visit Runswick Bay, two miles southeast of Staithes. It’s smaller than the other village and with fewer facilities, but still features the trim stone cottages, whitewashed and grouped tightly around narrow paths and steps. It also has a substantial sand beach about 100 yards south of the parking lot. Nearby are the ruins of Port Mulgrove, a substantial iron mining settlement in the 19th century, but now nothing more than abandoned breakwaters. It’s on National Trust lands, at the base of a 300-foot cliff that must be negotiated on a steep, rough path. It is said to offer the finest fossil hunting in the area, despite (or perhaps because of) its inaccessibility. Look for gray nodules and split them open with a hammer; you might just find a complete ammonite.

Unlike Port Mulgrove, the mining town of Skinningrove remains intact and populous, snug in its gorge near the northwest end of the cliffs. Its works did not close until the 1970s, and the town has the feel of a Victorian industrial settlement down on its luck rather than a Tudor fishing and smuggling village. What it lacks in restored quaintness, however, it makes up in easy parking, nearly no tourists and fine cliff access. The town is worth a stop for its excellent mining museum, the Cleveland Ironstone Museum, where an iron mine and its entrance tunnel have been repaired and opened to the public.

Early iron mining villages such as Skinningrove, Port Mulgrave and Staithes relied on their ports to get their ore to markets, but by the late 19th century this wasn’t cutting it. A railroad was built following the cliffs, about a half-mile inland—actually two railroads, the Whitby, Redcar and Middlesborough Union for the north half, and the Scarborough and Whitby Railroad from Whitby southward. The latter, never profitable because of its steep grades and sharp turns, is now a paved bicycle path known as the Cinder Track. Just outside Whitby it crosses the valley of the River Esk on a brick viaduct carried 120 feet above the river by 13 slim brick arches, whose broad views were praised by Bram Stoker in Dracula. From there it twists and turns through the empty farmlands above the cliffs, passing Robin Hood’s Bay at five miles and reaching its literal and figurative high point at 10 miles—Ravenscar, atop 600 foot cliffs.

The Victorian era railroad owners expected Ravenscar to be a big hit among tourists, what with its astonishing views, and developed it accordingly. Alas, English holiday-makers, who love their beaches above even the finest views, did not appreciate having to climb a 600-foot cliff path to reach a stony shingle, and ignored it in droves. Today, it’s a scatter of 19th-century urban architecture among the fields, including a railway station and hotel (now a tea shop). The views, however, remain stunning, and unlike the slightly higher cliffs at Boulby, easily reached by auto; the National Trust maintains a visitors’ center here.

Fine little cities anchor the ends of the North York Moors cliffs. On the northwest it’s Saltburn-by-the-Sea, a classic seaside town with a wide sand beach. A mile’s walk from the beach leads you to the top of 300-foot cliffs, and these cliffs frame all views over the broad, flat sands. The attractive Victorian town sits atop its own 100-foot cliff, linked to the beach by a gravity-powered inclined railway; the top car has its large tank filled with water, whose weight causes it to sink down the steep track and pull the lower car up.

Scarborough, however, is the crown jewel of the cliffs of the North York Moors. A lively little city of some 50,000, it guards the southern end of the Jurassic formations with a formidable castle atop a cliff-ringed promontory 280 feet above the town. Its keep survives, as well as its gatehouse and most of its walls, all built of fine golden stone with wide views over the town. The castle cliffs protrude almost into the harbor, with paved paths leading steeply down. Here, pleasure craft and fishing boats bob at anchor inside a tidal harbor marked by a whitewashed stone lighthouse, lined with buildings that alternate between distinguished history and gaudy vulgarity. Beyond that the Victorian city center perches 200 feet above spectacular sand beaches. This marks the southern end of the North York Moors, although a differing geology continues to form sea cliffs from younger Cretaceous rocks for another 20 miles.

At Scarborough’s center, you will find The Rotunda, one of Britain’s finest science museums, founded and designed in 1829 by the great geologist William Smith. A canal surveyor, Smith had pioneered the principles by which strata are sequenced by way of fossil groups, and had used his principles to construct the first geological map of England in 1815. The museum now proudly celebrates his achievements with displays carefully restored from their 19th-century originals, including Smith’s original cross-section of Yorkshire's cliffs ringing the top of the cylindrical main building.

All you need to know

North York's Moors National Park covers a huge inland area (about 550 square miles) as well as the coastal cliffs. Its website, www.northyorkmoors.org.uk, is very visitor-oriented. The entire cliff area except for Skinningrove and Saltburn is governed by Scarborough Borough Council, whose Tourism Bureau sponsors the website www.discoveryorkshirecoast.com.
Opening times and admission information for Scarborough Castle, run by English Heritage, can be found at www.english-heritage.org.uk/daysout/properties/scarborough-castle.

For Staithes and other nearby cliff villages, try the excellent and informative website www.visitstaithes.com, run by the rural English equivalent of a local chamber of commerce. For Robin Hood’s Bay, www.robin-hoods-bay.co.uk is a good source of visitor information. The Robin Hood’s Bay Museum can be found at museum.rhbay.co.uk. For the Cleveland Ironstone Museum in Skinningrove, visit www.ironstonemuseum.co.uk.