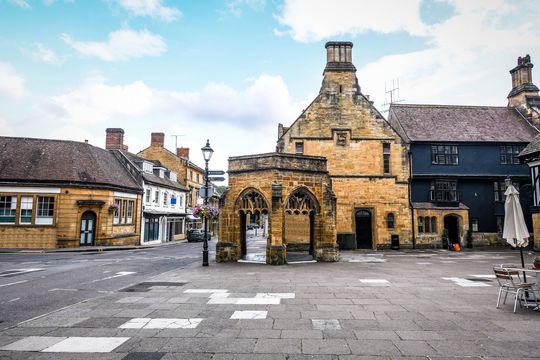 Fancy a day perusing grand sights of quaint scenes? Visit Sherborne in Dorset and you can do both.

Because the small market town is home not only to heart-meltingly gorgeous medieval and Georgian streetscapes of ochre-colored hamstone, but also to two castles and an abbey whose fan-vaulted roof is a match for any from the Italian Renaissance.

Of bishop, butcher and bells

On arrival, drop into the tourist information centre on Digby Road in the heart of town for a town trail leaflet pointing you to all the main highlights. The first is just across the road, in the imposing form of Sherborne Abbey. St Aldhelm, first Bishop of the West Saxons, founded a cathedral here at the place of the ‘Scire-burne’ (‘clear stream’) in AD 705 – you can still see a fine Saxon doorway. The cathedral later developed into a Benedictine abbey, until it was dissolved at the Reformation and townsfolk bought it for £320. It continues to this day as one of England’s most beautiful parish churches: poetic justice, perhaps, as local denizens were once excluded from the abbey except for special occasions – a niggle that had boiled over into a riot in 1437, leading the abbot to enlist the services of a hammer-wielding “stout butcher” to settle matters.

The present abbey is mainly 15th century and its most glorious feature is its ethereal weave of fan vaulting, the earliest great fan vaulting in England. You can view the lofty stonework by looking into a large mirror at ground level, thus avoiding a crick in your neck as you get lost in admiration. More down-to-earth, and fascinating in a slightly grisly way, the abbey also showcases the bones and sarcophagus of Ethelbald and Ethelbert, Saxon kings and older brothers to King Alfred the Great.

Ambling around, you can easily spend a good hour in the abbey, inspecting fine stained glass and monuments to the great and the good from the 12th century onwards. On Sunday mornings and Tuesday evenings (practice night), you will hear the world’s heaviest peal of eight bells ring out.

Read more: British landscapes from your favorite books to explore on vacation

Before lunch, there’s time for a wander around the town’s history, beginning across the green at the splendidly quaint Almshouse of St John the Baptist and St John the Evangelist. Founded by royal licence of King Henry VI in 1437 for 17 men and women, the almshouse still provides accommodation for the elderly today and is open to the public in summer.

Walking back across the green, you pass the Digby Memorial commemorating George Wingfield Digby, a benefactor of the Victorian restoration of the abbey. Adorning one side of the monument, buccaneering Elizabethan seadog Sir Walter Raleigh gazes out as though to distant adventures (more of which anon).

Following Church Lane and just before the 15th-century Bow Arch (a gateway between the abbey precincts and ‘commercial’ Sherborne), you arrive at the (free-entry) town museum housed in the former abbey almonry. Here, magpie collections offer exhibits both notable and quirky including a digital version of the beautifully illuminated Sherborne Missal manuscript produced by two abbey brethren in 1410 (the original is now in the British Museum); a wall painting of 1480 illustrating a local legend of a cleric who conjured a (disarmingly perky) devil into a boot; and tales of Sherborne’s silk and glove industries.

Continuing on, you come next to Cheap Street with the town’s main crop of independent shops: antiques and gifts to family butcher and grocer stores sit side by side. Here and along streets leading off, teashops and old-world pubs are ready for lunch when you are, including Oliver’s (sandwiches and salads to cakes), The George (Ploughman’s with cheese to homemade cottage pie) and The White Hart (sausage-and-mash to rump steak).

Read more: The history of the Irish Crown Jewels

Once you’re replenished, head for the edges of town and Sherborne’s two castles, either side of Sherborne Lake.

The Old Castle is a romantic ruin of the 12th-century fortified palace built by Bishop Roger of Salisbury, Chancellor of England (it’s claimed that the Exchequer system was invented here). In 1592, Queen Elizabeth I’s court favourite Walter Raleigh acquired the lease of the castle, but finding it rather damp, he set about building a swanky alternative mansion in 1594 – at the core of today’s new castle. The Old Castle, passing into the Digby family, would be twice besieged during the Civil War in the 17th century and “malicious and mischievous, like its owner” was ruined by Parliamentarian forces.

Back around the lake, Sherborne (new) Castle is very much a lived-in home. Raleigh scarcely had time to enjoy it due to spells in prison, voyages vainly seeking El Dorado and its fabled gold, and, finally, execution by order of King James I who had always suspected him of treason.

Raleigh fans can see the pipe the high seas adventurer reputedly puffed on the scaffold, while in the garden is the stone seat where he had used to sit smoking – only to be drenched in ale by a servant who, unfamiliar with the New World tobacco habit, believed his master to be on fire.

Diplomat Sir John Digby acquired the castle in 1617, adding four wings to Raleigh’s mansion to give the house its present H-shape. It has been in the family ever since and you will find a trove of fabulous art, porcelain and furniture collected through the generations. Do leave time to explore the sensational Lancelot ‘Capability’ Brown landscaped garden surrounding the 50-acre lake, followed by afternoon tea in the tearoom.

Accommodation in and around Sherborne ranges from the upmarket Georgian boutique Eastbury Hotel to peaceful b&b at The Alders, three miles away at Sandford Orcas. Staying longer, Thomas Hardy fans can explore scenes from his Wessex novels including Dorchester, while Weymouth, made famous as a resort by sea-bathing King George III, boasts a handsome Georgian seafront and fine sands. Between Sherborne and Dorchester, Britain’s largest chalk hill figure, the naked Cerne Giant, is an ancient eye-opener. While the extraordinary 18-mile pebbled Chesil Beach links coastal gems like the Isle of Portland with its castle built by King Henry VIII and picturesque Abbotsbury village with its swannery and subtropical gardens.

The landscape is dotted with the highest concentration of Stone and Bronze Age sites in western Europe, as well as Romano-British Chysauster Ancient Village.

Visit Land’s End or catch an unforgettable outdoor performance at The Minack Theatre on the cliffs at Porthcurno.