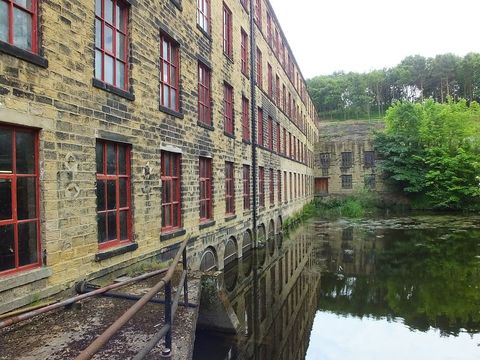 Modern Yorkshire was manufactured from cloth, coal, and steel, and the tale of its construction in the 18th and 19th centuries can be explored in a day.

Nowhere grew bigger and faster than Leeds, now Yorkshire’s largest city. A couple of miles from the thriving city center, Armley Mills is home to Leeds Industrial Museum, a fascinating visit that tells the story of how the textile trade led to a population explosion in this part of Yorkshire and set the county on the road to becoming an industrial powerhouse.

The first sighting, especially if approached from the car park across the Leeds-Liverpool Canal, is of a small, compact mill. But the modest, two-story building that greets visitors is actually much bigger, an illusion caused by Armley Mills being constructed against the canal embankment. Visitors enter the mill on the third of four floors and are quickly ushered into one of the vast rooms containing the machinery once used to make cloth. Here, the scale of the building becomes clear. Armley Mills was once the biggest wool mill in the world, built to house enormous spinning machines.

I visited on a warm, spring morning, with sunlight streaming through the windows, a scene far removed from the dark, satanic mills of William Blake’s “Jerusalem,” but the reality of life here during the Industrial Revolution was far different. A large spinning machine called a mule is housed on the spinning floor and volunteer guides occasionally turn it on. When they do, the mill is transformed; the peace was broken by a cacophony of clanking, whirring, and banging as the 30-meter-long machine clatters outward, stretching lines of thread, before wheeling back again. Imagine this on a dark morning with little light helping the scavengers—children as young as 6 years old—as they scurried inside the working machine to remove stray and broken threads. Needless to say, accidents were commonplace.

Move away from the mule and you’ll proceed down one floor at a time, finding more galleries covering other aspects of the textile trade and a few other local industries such as printing and cinema. Just outside, a couple of textile workers’ cottages have been restored as they were in the 19th century.

Parts of Yorkshire are still dominated by small, terraced houses of this type that were built in the hundreds of thousands by factory and mill owners. They needed their employees to live within a short walk from their place of work, bringing an end to the rural, domestic system of cloth production. Clusters of mills were built next to rivers and roads; street after street of terraced housing followed, leading to the rapid growth of new, industrial communities like Leeds. Between 1750 and 1901, Leeds expanded from a village with a population of 16,000 to a city of 429,000.

The reason that textile mills were often built alongside rivers was that their machines were powered by water. At Armley, water from the River Aire shot under waterwheels (two of which were named Wellington and Blucher to commemorate the victorious generals at the Battle of Waterloo) and was converted into energy to power the machines on the floors above. However, as factories and mills grew in size, a more reliable method was needed. Like most others, Armley Mills moved to a new source of power in the middle of the 19th century: steam engines.

Lives of the workers

Thirty minutes’ drive to the south is coal country, which once provided the fuel required to run the steam engines. You wouldn’t know it, but hundreds of miles of now-disused tunnels form a vast network underneath Yorkshire. Towns and villages are scattered along the border between West and South Yorkshire, each having grown up around a pit head. One of these, Overton, was home to the miners who worked at Caphouse Colliery, now the National Coal Mining Museum for England and the best place to explore this part of Yorkshire’s history.

To feed the hungry steam engines, coal had to be dug by hand. Miners would descend far underground, often going under before dawn and rising again after dusk. The lives of these human moles were almost unimaginably tough, and visitors can get a glimpse of their hardship by going on an underground tour at the museum. Each is led by a former miner who is knowledgeable about life in the subterranean world, from the women and children laboring in the Victorian mine to the closure of the colliery in the shadow of the miners’ strike in 1985.

The journey down the mineshaft takes place in a rickety metal lift better known as a cage. Be prepared for a heart-stopping jolt as it begins its descent into the earth. Once the cage completes its 200-foot plunge, the doors open onto a cold, dark, damp world. The eerily quiet tunnels would once have thronged with people eager to get their hard-won black gold back to the surface. The sound of pickaxes smashing the coal face and heavy wooden wagons rumbling along rails must have echoed through the tunnels, creating a cacophony of noise.     Although the tour is enormously interesting and informative, the light of the surface comes as a blessed relief after a dark hour underground.

The miners that worked together underground also played together on the surface. Mine owners were happy to sponsor soccer teams and brass bands in the hope that a happy workforce was a productive workforce. It spurred a deep-knit sense of community in the coal towns of Yorkshire. Perhaps that combination of tough work and community spirit led to the gruff yet friendly temperament that characterizes Yorkshire folk today, something explored aboveground in the museum’s informative galleries. Whether they were pigeon racers, brass musicians or artists, the miners often displayed a surprisingly sensitive and creative side in their leisure time. They were happy to contribute the little they had to the greater good, with miners’ welfare funds paying for libraries, sports grounds, playgrounds, and parks. Many still remain in the coal towns long after the mines have closed; tributes to the generosity of the hardy Yorkshiremen.

Coal didn’t just power the textile mills. Half an hour further south is Kelham Island, a man-made island on the River Don and home to an industrial museum that tells the story of how Sheffield became Britain’s steel city. Just as Leeds was founded on cloth and Overton depended on coal, Sheffield grew to prominence through her foundries.

One of Kelham Island’s prize exhibits looks almost like an afterthought. Outside the main entrance, the strange metal egg-shaped object held in place by two large uprights appears to be nothing special—it is even partially hidden behind a sign pointing to the car park —but this is actually a Bessemer Converter. Although dull and lifeless now, in the middle of the 19th century the converter was the beating heart of Sheffield’s productivity. Molten pig iron was poured into the top and air blasted through the base. Fountains of flame shot out of the top of the container, a spectacular but dangerous spectacle before the egg was tilted and newly made steel poured out. By 1880, Sheffield was producing 10,000 tons of Bessemer steel every week, almost a quarter of Britain’s total output. Countless forges, large and small, lined the River Don.

Sheffielders flocked to the forge every day for work, sparking the growth of South Yorkshire’s only city. Those who weren’t engaged in making steel were often at work in allied trades. Kelham Island Museum includes a reconstruction of Little Mesters Lane, in which skilled artisans used Sheffield steel to make watches, surgical instruments, and, most famously, cutlery. Peer through the windows and you’ll see that a couple of the workshops are still used by working craftsmen, including 91-year-old Stan Shaw, who makes his highly prized knives (for which there is a long waiting list) in front of the museum visitors.

On a grander scale, steel was used to make railways, machinery, and yet more forges. The galleries of the museum illustrate the various ways that Sheffield steel changed the world, from the intricacies of the first steel clock to the awesome power of the heaviest bomb in history. Don’t miss the 12,000-horsepower River Don Engine, the most powerful steam engine in Europe, which once rolled armored steel for World War I battleships. It is usually fired up two or three times a day and provides a spectacular, deafening sight.

The roar of the River Don Engine at Kelham Island joins the clatter of the mule at Armley Mills and the whack of the pickaxe at the National Coal Mining Museum—industrial Yorkshire was a noisy place, but it was also a crucible that created the county we know today, forging not only her towns and cities but also the nature of her people. Most of the mills, mines, and foundries that powered Yorkshire’s rapid growth have now closed. Armley Mills backs onto an entertainment complex housing a cinema, bowling alley, and restaurants. Overton is home to commuters who drive to work in nearby bigger towns and cities. Kelham Island is surrounded by trendy bars and cafes, now a fashionable spot.  Yet these three locations were once key players in the Industrial Revolution that built Yorkshire, and for those who know where to look, there is plenty of history to explore.