The story of Cornish tin mining 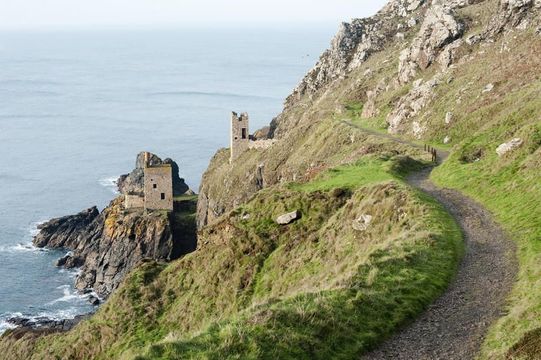 It was not cream teas and pasties, but metallic ore built Cornwall, on the in South West England.

“Hard rock breeds hard men / Who slip between earth’s cracks for a living….” The words of West Country poet James Crowden (“The Wheal of Hope”) reverberated in my head as I and other intrepid visitors squeezed through the underground workings of Wheal Mexico at Geevor Tin Mine. We heard from our guide, Andrew, how men toiled by candlelight here in the 18th and 19th centuries, how they used goose-quills as fuses to light gunpowder, and how nine-year-old children hauled out ore in barrows. All-day, breaking only for “mossel” (lunch) in some dark nook.

Cornwall may be a picture book of cream teas, pasties, and pretty fishing villages. But it is a landscape deeply shaped by mining heritage. This is the real world of Poldark: of hardships and fortunes, human tragedies and pride, dangers, and invention.

Read more: How to spend 24-hours in Exeter

Since 2006, 48,700 acres of Cornwall and West Devon’s mining landscape has been inscribed as a UNESCO World Heritage Site. Focused on the key period 1700 to 1914, when metal mining provided the raw materials to feed Britain’s Industrial Revolution and pioneered far-reaching technological developments, the site boasts remains of more than 200 Cornish engine houses; you can explore mines, harbors, tramway routes; towns and villages with distinctive terraced miners’ cottages and mine-owners’ country houses. Together, they reflect the boom times of local copper, tin, and arsenic production. In the early 19th century the local rivers and sea ran red as two-thirds of the world’s supply of copper was produced here; later, half the world’s demand for arsenic was met; Cornwall produced some two million tons of tin, the majority in the 19th century.

The last working tin mine, South Crofty in Camborne, closed in 1998 due to plummeting tin prices. But Cornwall’s mining relics have gained fresh life as visitor attractions and monuments to the tight-knit communities that grew around them. There are 10 areas in the World Heritage Site, each telling its part in the story. My favorite is St. Just on the north Cornwall coast, where the most dramatically located mines cling to cliffs, with workings that reached far out under the Atlantic. From a base in popular seaside St. Ives, it’s a beautiful half-hour drive wiggling along the B3306 amid scenes of gorse, heather, moors, fields, and sea to three remarkable venues at Geevor, Levant, and Botallack.

Geevor Tin Mine in Pendeen is the largest preserved mining site in Britain. Pick up a map (and hard hat) at reception and intersperse explorations with refreshments at the Count House Café overlooking the sea. The whole site is a great place to get an overview of the Cornish mining story, bringing 18th-century Wheal Mexico (“wheal” means “mine”), Geevor’s 20th-century tin mining infrastructure, and history in the superb Hard Rock Museum together.

Cornwall’s landscape is rich in metallic mineral deposits, particularly where granite and “killas” (mudstones and slates) meet. Mining activity dates back to the Bronze Age and early tin removal was by streaming, taking the tin out of river valleys, or open cast mining. Archaeological evidence points to trade between Cornwall and northern Europe and the eastern Mediterranean. With Cornwall and Devon providing Britain’s only indigenous tin resources, by medieval times Cornish tinners were renowned, their industry subject to special taxes, with unique privileges granted by Royal charter and mining practices based on Stannary law that took into account customary traditions.

As surface tin resources faded, tinners dug deeper following the lodes—the near-vertical sheets in the rock in which tin ore and other metals are found in Cornwall. The challenges of hard-rock mining and draining water from shafts spurred skills, innovations, and machinery that would be exported around the world. Most famously, following technological advances by Thomas Newcomen, James Watt, and Matthew Boulton, Cornishman Richard Trevithick ingeniously developed the Cornish high-pressure steam engine in 1800, used to pump water out of mines, hoist ore to the surface, and crush rock to start processing of the valuable ore. Cornish beam engine houses—once numbering around 3,000—are truly iconic landmarks.

Geevor’s museum tells plenty more about the mining technology, tinplate, and tin-for-coal ties with South Wales and its smelters. Fascinating artefacts also illuminate the people who made it all happen: the mineral lords and investors— “adventurers”—who won fortunes, and everyday working families whose livelihoods depended on the mines and vagaries of metal prices.

Around 25 percent of the Cornish population worked in mines. Mothers and daughters toiled as bal maidens (“bal” is Cornish for “mine”), working “at grass” (above ground) crushing ore into smaller fragments, hammer on anvil, only “gooks” (big hats) to protect their faces from debris and bad weather. Underground in hot, dusty levels (tunnels) and stopes (galleries) men risked rock falls, blasts, drowning and machinery accidents; to live to be 30 or 40 was lucky.

The courage and skills of Cornish hard-rock miners stood many a “Cousin Jack” in good stead when they joined the California Gold Rush or sought a new living abroad, from South Africa to Australia and the USA, when Cornish mining was hit by competition and economic doldrums. During “the Great Migration” (1815–1920), up to 500,000 people left Cornwall; possibly six million people worldwide today are descended from migrant Cornish mine workers.

While the Geevor site has been worked for hundreds of years, modern Geevor Tin Mine belongs to the 20th century; its closure in 1990 due to crashing tin prices a mirror to the industry’s recent decline. Guides like Grant, who took me on a tour of the mill to explain the processing of ore, used to be miners here; his pride in his former tough, but well-paid, work remains palpable.

From the Victory Shaft headgear that dominates the site, to the Winder House with cages in which miners traveled hundreds of feet underground, and the Union Hut highlighting disputes, there’s a poignant feel to Geevor. The Dry especially, where miners bantered and changed before and after shifts, has a “just left” atmosphere: Miners’ clothes still hang overlocker doors. One miner daubed “The End 16/2/90” on a locker, the day everyone was laid off. Grant says he has returned to his locker twice, but not yet opened it. Emotions remain that raw. Nevertheless, on leaving Geevor, it’s a feeling of admiration for people’s toughness and the long heritage they upheld that prevails.

After a half-mile walk along the Tin Coast footpath, or a short road drive passing the National Trust’s atmospheric Higher Bal engine house, there’s the chance to join a guided tour and see the restored 1840s beam engine running on steam at Levant Mine (Tressiders Rolling Mill in recent Poldark TV filming). For 110 years Levant, dramatically set on the cliff-top, was “the queen of Cornwall’s submarine mines,” with workings stretching out more than a mile beneath the sea.

Levant is probably best known today, however, for the man-engine disaster of 1919 when 31 miners lost their lives. The man-engine, a set of small moving platforms that miners stepped on and off to move up and down shafts, had been installed in 1856 to avoid long, exhausting climbs by ladders, greatly improving working conditions before the coming of skips or cages. But on this tragic occasion, the engine broke. Recently the original access shaft from the miners’ dry has been reopened as a memorial to the disaster.

You can stretch your legs further along the breezy-beautiful South West Coast Path for just over a mile to Botallack Mine (or drive there within a few minutes). The 19th-century Crowns engine houses breathtakingly gripping the rocks and West Wheal Owles on cliffs above became Ross Poldark’s Wheal Leisure in the TV series, and in the small information center-cum-café nearby you can watch a short film about Poldark author Winston Graham.

Pick up a self-guided trail leaflet that highlights Botallack’s other mining remains: tin-dressing floors, arsenic works (Botallack’s tin ore contained small quantities of arsenic) and the handsome Victorian Count House—the mine captain’s residence and offices where workers came for their pay. In the mid-19th-century heyday of Cornish mining, adventurers gathered in such count houses to examine the books and share out profits (or dig deeper into their pockets) and to enjoy lavish dinners. In 1843 an almost-pure-tin dinner service (now displayed at Geevor) was made for Botallack Count House dinners to promote the versatility of the metal. It was reported to be “clean, sweet and serviceable in every respect.”

Along the peaceful cliffs here today, it’s difficult to imagine the smoke and din of yesteryear, and hard to believe that an industry that so dominated local lives has gone. But perhaps it hasn’t. Recent news is that 20 years after the last working mine, South Crofty in Camborne, closed, Canadian company Strongbow Exploration is planning to re-start mining there by 2021. If the economics stack up, the centuries-old story of tin could yet see another turn of fortune’s “wheal.”