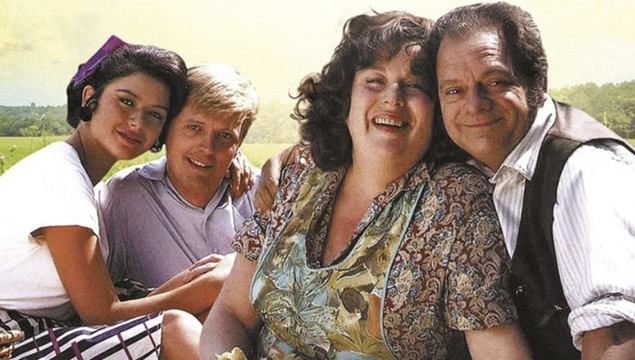 The Darling Buds of May: H.E. Bates’ story of country life in the Garden of England during the 1950s captures the idyllic charms of English rural life.ITV

Travel through the countryside which inspired H.E. Bates' novels and one of the most popular British TV series ever made - The Darling Buds of May.

"Rough winds do shake the darling buds of May and summer's lease hath all too short a date."

It is a classic motif of English literature dating back to before Shakespeare: the city is ominous and evil; the rural, rolling countryside of England is innocent, benign and good. Let us flee the lure of the town’s formalities, temptations and rat race for the bucolic charms, rustic innocence and freedom of restraint in the Forest of Arden—or the Garden of England, as it may be.

Here in the lush, green and pleasant land of rural Kent, H.E. Bates set his novels of the 1950s, The Darling Buds of May and its sequels. It’s hard to imagine a time or a place any more replete with romantic innocence.

After many years of dickering overproduction and rights, Bates’ popular novels of rural Kent life just a little bit outside of the box were made into a series and were broadcast over parts of three seasons on ITV in 1991-93. Now 20 years later, The Darling Buds of May remains Britain’s highest-rated television series ever.

To commemorate the 20th anniversary, in 2013, of the landmark and still much-loved series, the Kent Film Office and sundry agencies have created The Darling Buds of May Trail in the Wealden villages where the story was set, and where the series was filmed. The epicenter of the trail is the village of Pluckley, roughly halfway between good-sized Ashford and the small town of Tenterden. Armed with the Darling Buds of May trail map and helpful brochure, I set out for Pluckley.

The High Weald of Kent, between the busy market town of Ashford and the south coast, is a warren of tidy villages sprinkled across the wooded hills and fertile farmland. During the 1950s and for generations before, this area was rife with hop gardens. A plentitude of oast houses—kilns for drying hops—leave telltale evidence, though most of the commercial hop growing has migrated elsewhere. Apple orchards, market garden fields, and grazing land still abound.

Against this backdrop, Bates spins the story of the free-spirited Pop Larkin and his family living on Home Farm at the edge of the village, blissfully uncompelled by either the social expectations or the neurosis of the larger world. Ma and Pop Larkin and a brood of eccentrically named children live in a world apart. Ostensibly a farmer, Pop is a wheeler-dealer, a scrounger, a bit of a lad with his eye on the prize. Cash never seems to be a problem. Life is good.

The Larkins don’t eat; they feast—on a lot of food that would give a cardiologist a stroke. The cocktail cabinet is freely opened, and there’s always a bottle of whiskey on the kitchen table as if it were a condiment like a malt vinegar or brown sauce. And Ma and Pop aren’t actually married, though it doesn’t seem to bother anyone in the family.

The series’ surprise star, however, was Catherine Zeta-Jones. The ambitious Welsh girl was chosen from a casting field of 300 to play Ma and Pop’s oldest daughter Mariette Larkin. It was Jones’ breakout role and what made her a star.

The village of Pluckley itself is the Larkins’ village. All the community and communal scenes were shot here. A walking trail around the village takes all of about 10 minutes if you linger. This is a village, remember. The Black Horse pub, known as the Hare and Hounds when it was Pop Larkin’s local, sits right across the gravel “square” from the butcher shop and the village grocers. Next door is St. Nicholas Church and pristine churchyard, where Mariette and Charley got married (and the scene of sundry other goings-on). To those who know the series, Church Gate Cottage would be recognizable as Edith Pilchester’s house. The walk and garden are very familiar. Across the street is the C of E village primary school; in the series, it doubled as the village hall. The Brigadier’s house is next door—another familiar garden. 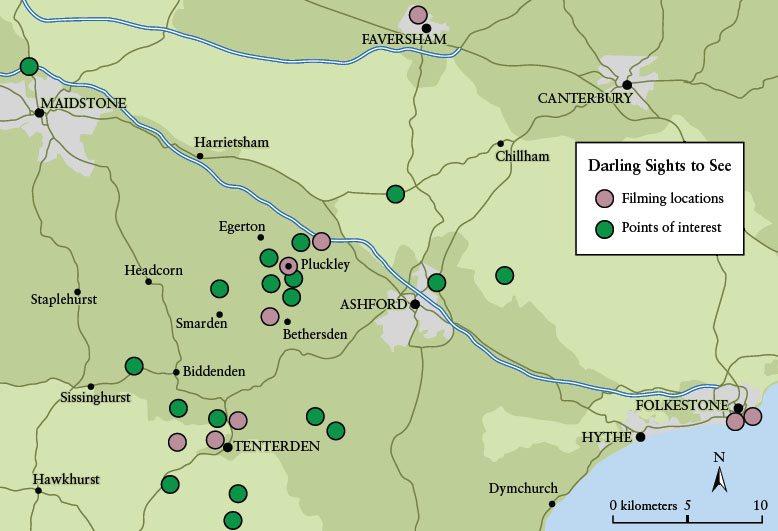 I drove over to the neighboring village of Bethersden to search for Buss Farm, Home Farm to the Larkin clan and described as “virtually unchanged” from the days of filming Darling Buds. Its location on the trail map is understandably a little vague. After driving around in search, I paused at the village pub for refreshment. A local man graciously offered to lead the way. I followed him for a couple of miles along pretty country lanes. 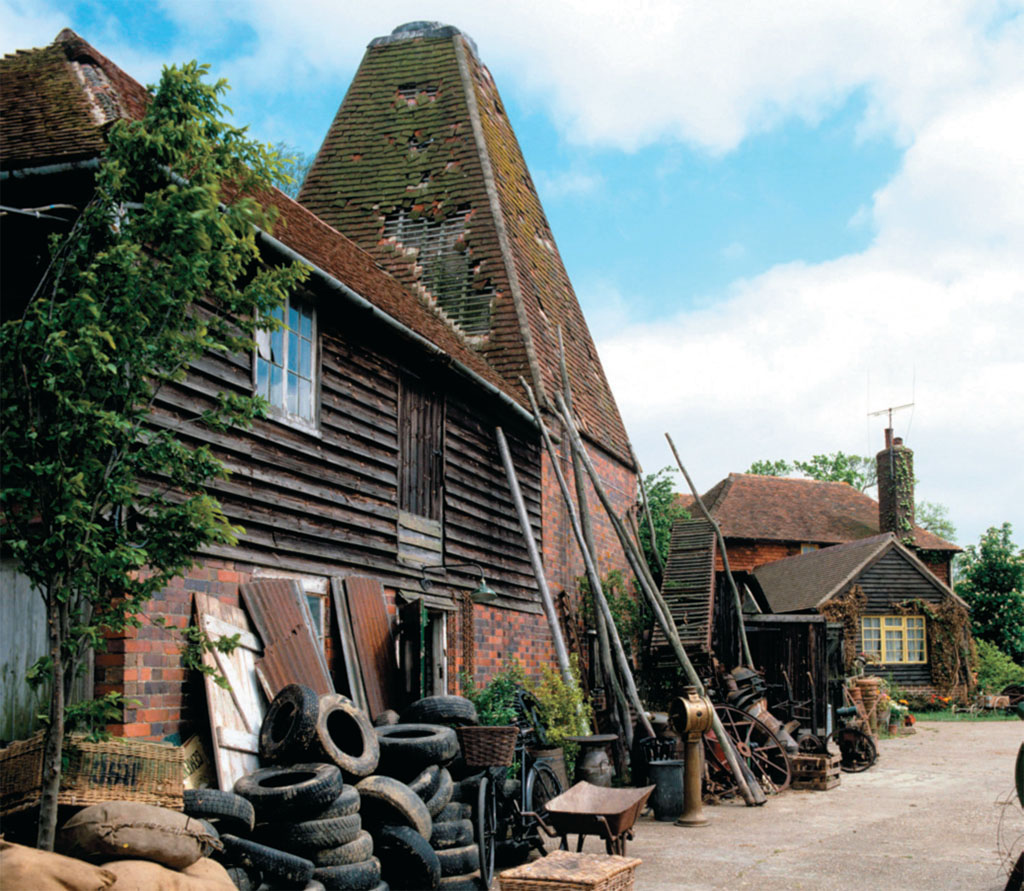 I met the man who has owned Buss Farm since 1972 while he was out walking his dog. We had a nice chat, but he declined to have me photograph the farm for publication. The farm is open to the public only one weekend a year—for the Darling Buds of May Classic Car Show.
Tenterden proved far more hospitable. This is one of the prettiest small towns in Kent—or maybe anywhere. It’s also home to the Kent and East Sussex Railway. The vintage steam train line takes riders across the Weald on a 20-odd mile journey to Battle, East Sussex. It’s also the train that brought tax man Charley into the Larkins’ lives (among others to and fro journeys throughout the series). The steam train also offers evening excursions with fine dining aboard vintage Pullman dining cars. A steam train ride on the Kent and East Sussex is probably the closest you’re going to get to experience the 1950s world of Home Farm and the Larkins. 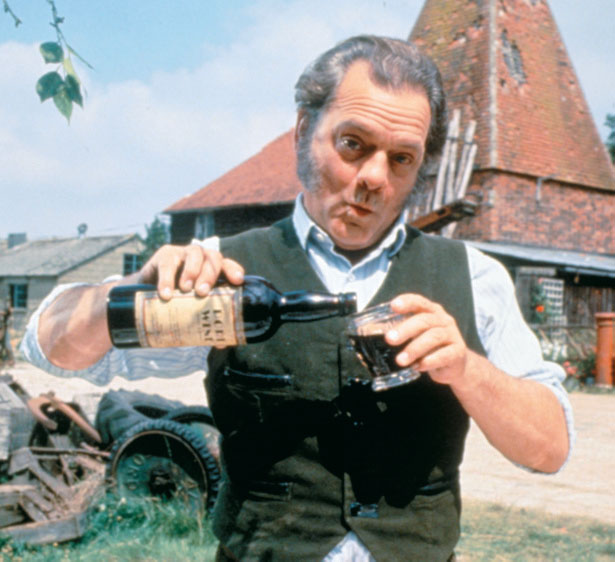 In addition to places specifically associated with filming Darling Buds, the trail map offers a four-mile circular walking tour around the village of Pluckley and drives further afield to farm shops and cottage industries, windmills and pubs that all characterize both the contemporary and the timeless of rural Kent: the Pluckley Farm Shop, Willesborough Windmill (still making stone-ground flour), Chapel Down Winery and Kingcott Cheese. 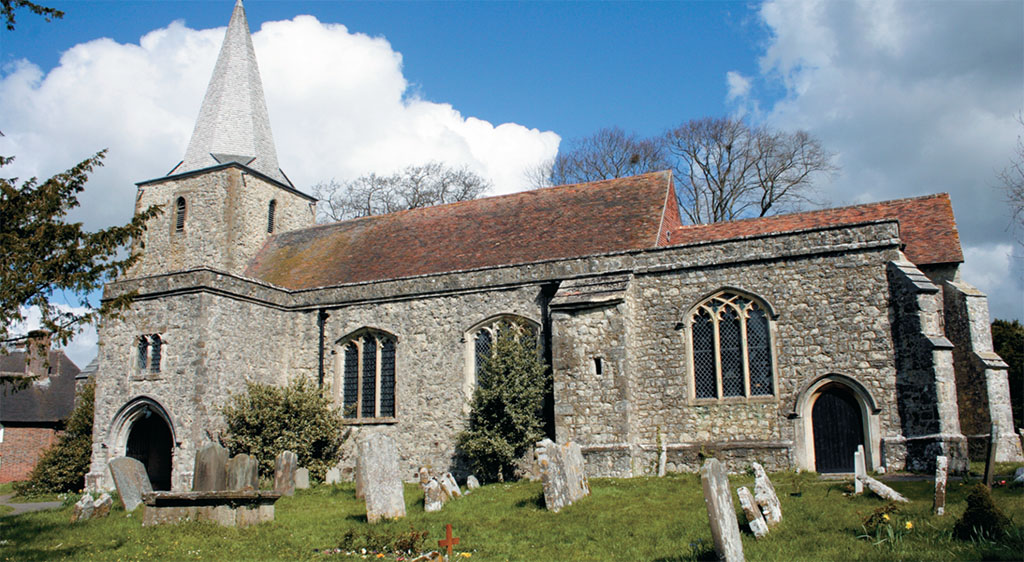 It’s hard to imagine life as colorful as it was with Ma and Pop Larkin (and Mariette, Montgomery, Primrose, Zinnia and Petunia (the twins), Victoria, Oscar, Charley and John Blenheim)—certainly not in rural postwar Britain just weaned off of food and clothing rationing.

In this part of the world, however, it is easy to imagine the optimism, the neighborliness and the innocence of folks who smile easily, look constantly ahead and don’t much care what the fashions of the world think.

No, the Darling Buds of May Trail is not going to replace Blenheim Palace and Hadrian’s Wall on tourists’ A-list of destinations. It does what it sets out to do, however: communicate the pleasing, if now passed, the world of Darling Buds, and evoke how timeless that world still now seems on the Weald of rural Kent.