Elgin and its biblical garden 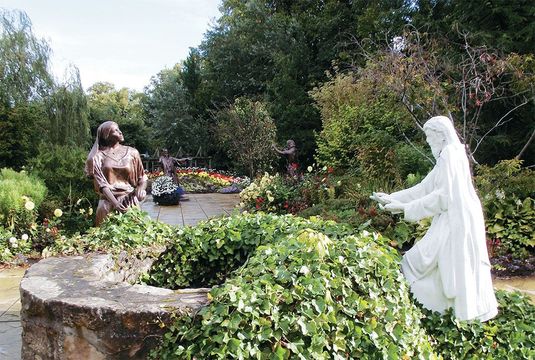 Jesus greets the Samaritan woman at the well in Elgin’s Biblical Garden.

A gem of a visit on the Grampian Line, in Scotland.

Elgin, the principal town in the district of Moray in the north of Scotland, retains much of its medieval character. With its cathedral and closes, small lanes leading off the main street to hidden dwellings and back streets and many other interesting relics of the past such as carved stones and marriage lintels incorporated into more modern buildings, Elgin is a delight for visitors.

Having a cathedral makes Elgin, population 23,000, what is known in Scotland as a cathedral city. It is also a Royal Burgh courtesy of a Charter signed by King David I of Scotland in 1136. Despite being steeped in history, one of Elgin’s most attractive features is its biblical garden, only opened in 1996, which is nevertheless an appropriate attraction given the town’s 14 centuries of religious tradition.

Located on a three-acre site almost in the shadow of the cathedral, this well-kept secret is a haven of color that changes over the summer months and with each successive year, giving visitors an always fresh experience, while at the same time offering peace, tranquility and a place of meditation.

The man behind the idea of the Elgin Biblical Garden, Moray horticulturist Donnie McBean, says that the garden “brings in people from all over the world who get comfort from it.” According to McBean, many visitors, particularly the recently bereaved, find “the quiet and peacefulness spiritually uplifting, while for others the attraction is simply that of a garden”.

Even the sign showing the opening times, with its four-line excerpt from Dorothy Frances Gurney’s poem “God’s Garden,” gives visitors a lift;

The kiss of the sun for pardon,
The song of the birds for mirth,
One is nearer God’s heart in a garden
Than anywhere else on earth.

As you enter the garden, you pass the figures of three teenagers, representing all nationalities and religions, studying the Bible. You then start up the stem of the Celtic cross formed by the garden’s paved pathways. At the center of the cross are sculptures representing Jesus, the only figure depicted in white, and the Samaritan woman at the well.

Read more: Taking a cruise around the Northern Isles of Scotland 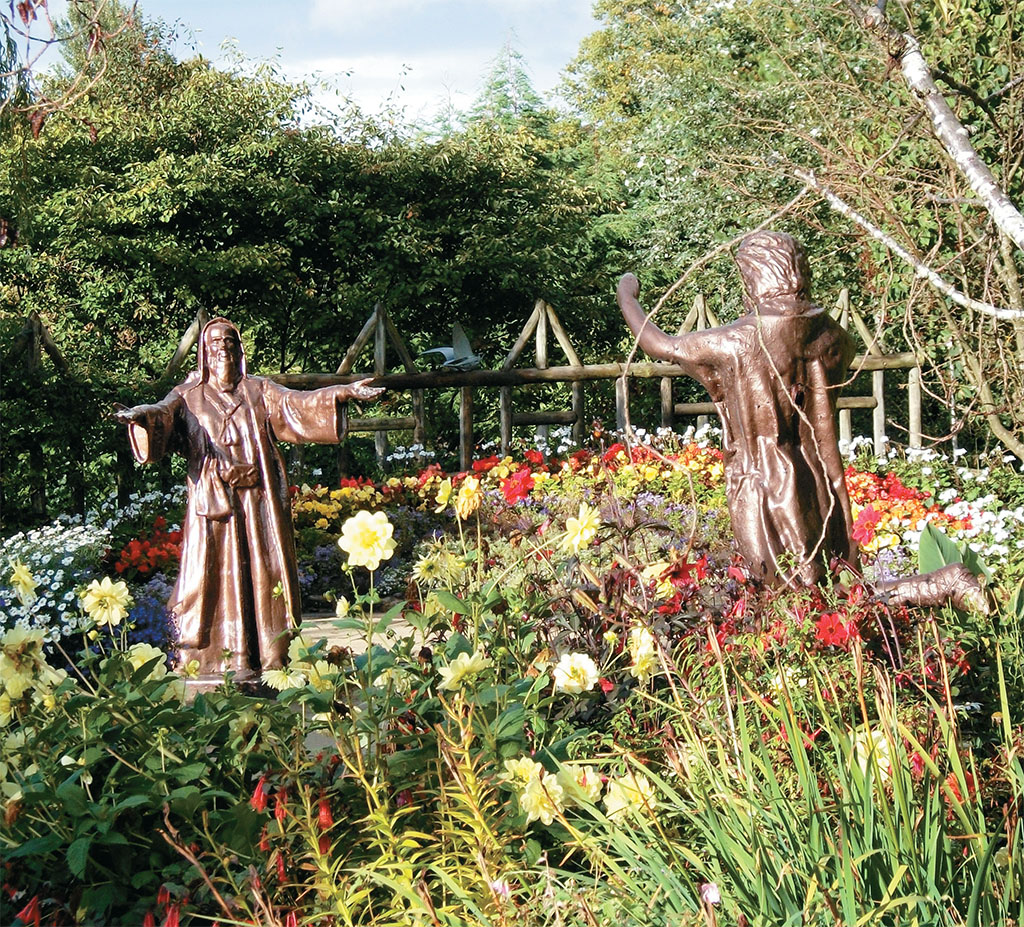 A delighted father welcomes home his Prodigal Son amid a planting of many of the garden’s 73 varieties of botanicals mentioned in the Bible. FORBES INGLIS

This wonderful garden houses 73 of the 110 plants referred to in the Bible, with cross-references to the relevant biblical passage and explanations of their uses. So we learn that thistles and thorns, Genesis 3:18, were used for animal fodder and fuel, while plants such as leeks, onions, and garlic, Numbers 11:5, could be used as food or for medicinal purposes. Balm, Genesis 37:25, was grown for its oils and perfume, and sycamore, Luke 19:4, provided building timber as well as giving Zacchaeus the platform he needed to view Jesus. 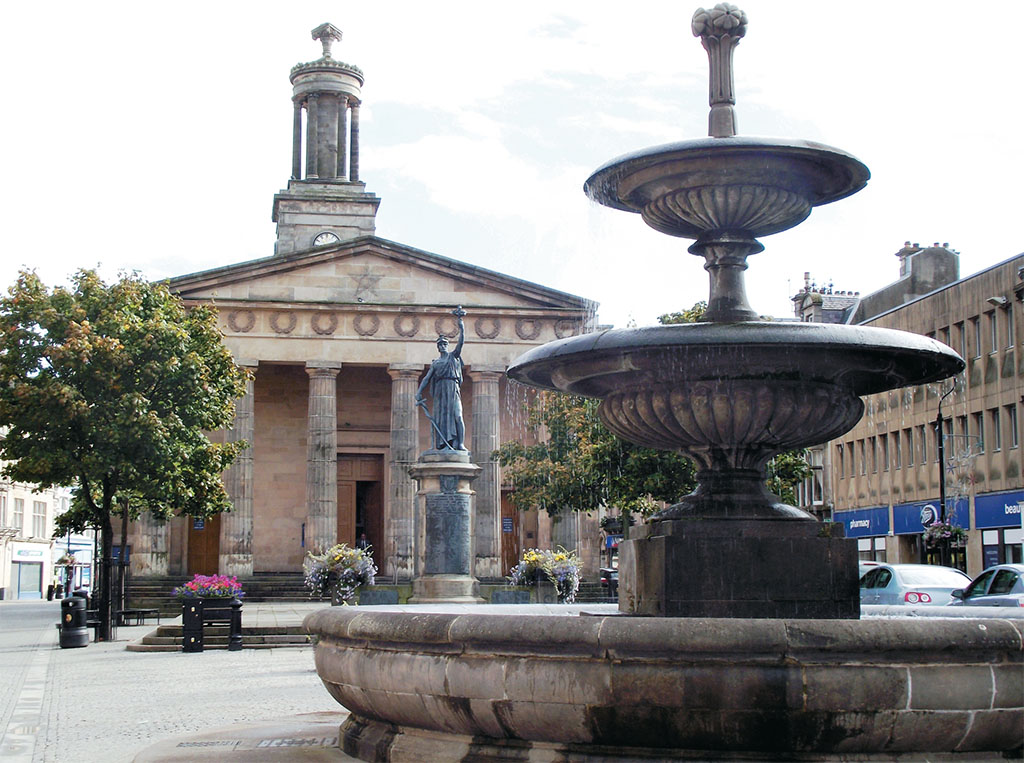 The fountain in the middle of the square at Elgin’s town center stands in front of St. Giles Church, and occupies the site of Elgin’s old Tolbooth. FORBES INGLIS

Not content with that, the garden has several life-size figures portraying characters from Bible stories, such as Samson in the Temple, the farmer who sowed his seed in stony ground, Moses receiving the Ten Commandments, the return of the Prodigal Son and many others. Other parts of the garden depict the desert region of Mount Sinai, the cave where Jesus’ body was laid and a pool and marsh area representing the Nile where the baby Moses was found.
At the rear of the garden is a floral representation of the rainbow seen by Noah after the flood, and, behind that, the dove sent out from the Ark rests on a trellis fence, which itself reflects the architecture of the cathedral. www.biblicalgardenelgin.com 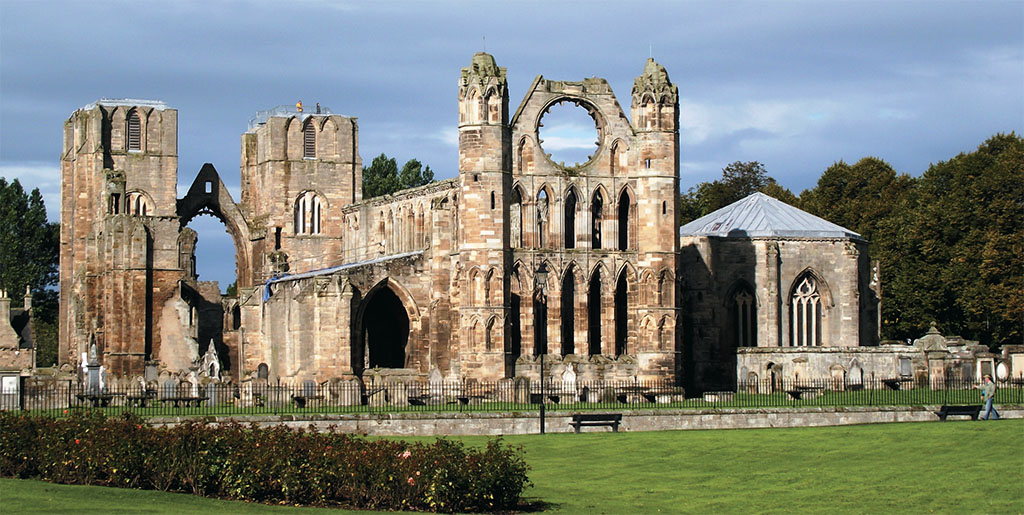 Though Elgin’s elegant cathedral hasn’t been a cathedral church since Scotland’s 1560 Reformation, its presence makes the Moray community a “city.” FORBES INGLIS

Elgin Cathedral, founded in 1224, is the town’s best-known landmark. In 1390 Alexander Stewart, better known in Scottish history as the Wolf of Badenoch, sacked Elgin and burned its cathedral in revenge for being excommunicated by the Bishops of Moray and Ross for deserting his wife. He later did penance for his misdeeds, and when he died he was buried in Dunkeld Cathedral. 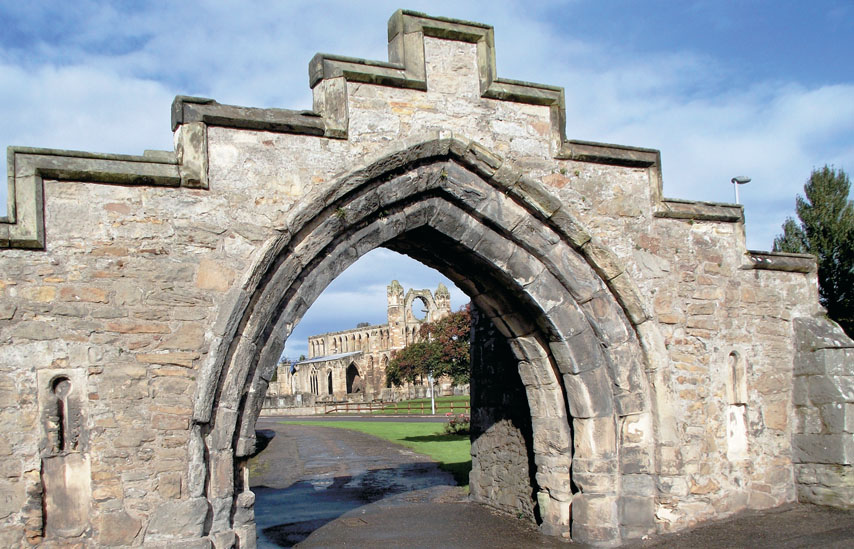 Panns Port is the only one of the four cathedral gateways standing. FORBES INGLIS

After the Scottish Reformation in 1560, the cathedral fell into disrepair, and before long the stone was being appropriated for local building work, and it was not until 1825 that the cathedral was taken over by the government. Restoration work continues to this day. www.historic-scotland.gov.uk

Another piece of medieval architecture, Panns Port, restored in 1857, is the only one of the four gateways into the cathedral precinct to survive. (Confusingly, the port in old Scots place names means gate, while gait or gate generally means street or way.)

Read more: Where lovers run to wed - a history of Gretna Green

Visitors to Elgin over the centuries, some more welcome than others, have included Edward I of England, the monarch known as the Hammer of the Scots, Dr. Johnson, the famous lexicographer, and Prince Charles Edward Stuart, Bonnie Prince Charlie, who spent time there before his defeat at the Battle of Culloden in 1746.

Dr. Johnson and his companion, James Boswell, found the food inedible, while the prince caught a fever. Charles was forced to stay at Thunderton House where he was nursed back to health by Mrs. Anderson, a fervent Jacobite who kept the sheets from his bed and was buried in them when she died. Thankfully, the modern visitor is likely to fare better in both hospitality and health.

The spacious town center houses St. Giles Church, which dates from 1827, and is probably Elgin’s best-known feature after the cathedral. There has been a church on this site since the 12th century. In front of St. Giles is the war memorial, remembering the townsfolk who lost their lives in the two World Wars, while the magnificent fountain occupies the site previously occupied by the tower of the old Tolbooth. Literally, where the tolls or taxes were collected, the tollbooth was the center of administration in Scottish burghs and often included a prison.

Other attractions for the tourist include Gordon & MacPhail, founded 1895, the world’s leading Scotch whisky specialists, famous for their portfolio of single malts and whiskies dating from 1936 to the present day, while those seeking to know more about the distilling process can visit the Glen Moray distillery just a few miles outside the town. www.gordonandmacphail.com and www.glenmoray.com

Another attraction is the internationally renowned Johnston’s of Elgin who have manufactured cashmere and other fine knitwear since 1797. www.johnstonscashmere.com

Elgin Museum, which boasts a widely known collection of fossils as well as many other fascinating displays, was one of the first custom-built museums in Scotland, and it is still independently run today. www.elginmuseum.org.uk

Some things you may not know about the town? Quarrie Wood was used for hunting and the name comes from the word quarrel, meaning a bolt shot from a crossbow, rather than the more conventional meaning of the word quarry as a place for mining stone.

The Muckle Spate (great flood) of 1829 saw 6–9 inches of rainfall in two days and resulted in Moray’s worst recorded flood.

Workmen restoring Greyfriars Church at the end of the 19th century found a mummified cat, now on display in the town museum, secreted within the walls. Live cats were often walled up in buildings in earlier times as this was thought to give effective protection from evil spirits.