Leeds: From temples to markets, a city built on trade 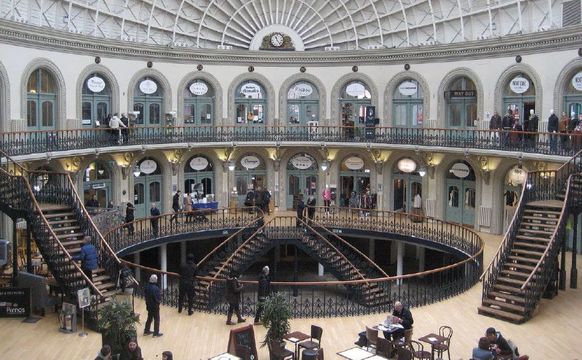 How a medieval market at a river crossing grew to be a world trading powerhouse and England's third-largest city.

Sometimes you have to be in the right place at the right time. For medieval cloth traders, that place was a bridge spanning a vital crossing point over the River Aire in Yorkshire. Just three miles away, Cistercian monks at Kirkstall Abbey farmed more than 10,000 sheep. To the south, hundreds of cottage workers produced valuable woolen cloth. The river was also their trade route to the sea at Hull.

The right time to be there was on a Tuesday.

Tuesday was market day in Leeds for many centuries. The market started on the bridge before expanding north onto Bridge Gate. Today, Leeds is Britain’s third-largest city, and Bridge Gate, now “Briggate,” is still there, a busy shopping area surrounded by lavish Victorian architecture. Leeds’ Kirkgate market with its domed glazed roof is one of Europe’s largest indoor markets with 160,000 visitors a week. The chandeliers and marble columns of the Victoria Quarter shopping arcades evoke images of Milan.

Such attractions saw Leeds cited as Britain’s best shopping destination by the Lonely Planet Guide, yet there is much more to the city than retail therapy. From cloth to grain to the industrial revolution, the story of Northern entrepreneurial effort is seen throughout the city.
The market on Briggate was first established in 1207. The Lord of the Manor set up the street wide enough to accommodate the market and permanent plots, or “burgages,” on either side for a local craftsmen to live and work. This new wide street was a “chain” wide (22 yards)—an old English measurement. 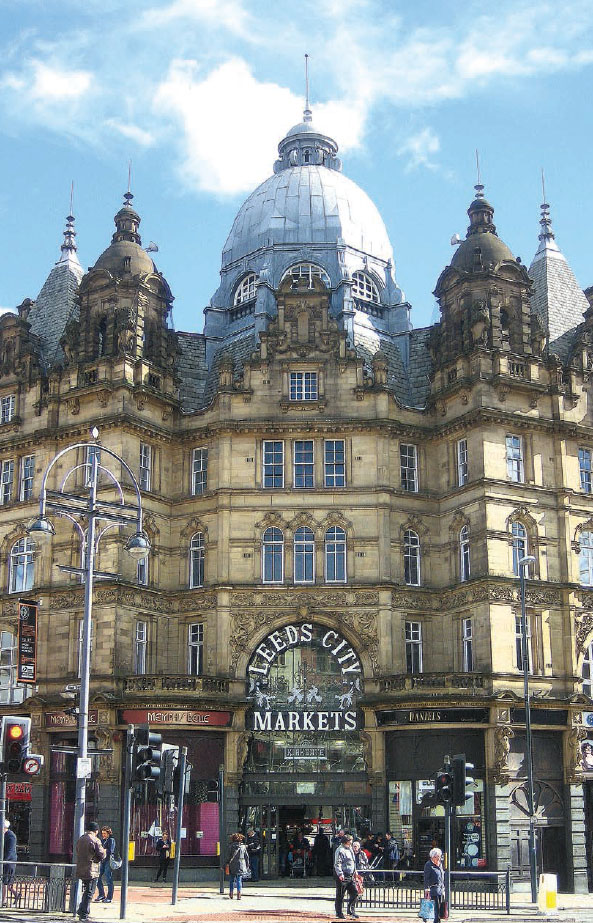 
The market allowed the cloth trade in particular to flourish. Dr. Kevin Grady, director of the Leeds Civic Trust for nearly 30 years, explains the importance of the Leeds cloth trade: “By 1770, one-third of Britain’s exports were in woolen cloth, and Leeds’ merchants dealt with half of that business—one-sixth of the country’s entire exports.” Cloth went east by the river to Hull and Europe and west by canal to Liverpool and America. “The cloth merchants were the millionaires of their day.”

As well as the Briggate market, merchants and other traders came together on that important Tuesday to trade in the White Cloth Hall. Regrettably, little of this original Georgian building remains, yet it is a vital part of Leeds’ story. “Without this building, Leeds simply wouldn’t have been the city it is today,” says Grady.

The vast hall covered several blocks and incorporated stalls for more than 200 traders of white undyed cloth as well as stabling for their horses. On the upper floors, lavish assembly rooms were available for entertainment; the central courtyard was even big enough to accommodate hot-air balloon ascents. The Coloured Cloth Hall soon followed, built on a similarly impressive scale.

For models of both halls, start your journey at the Leeds City Museum, where comprehensive galleries tell the Leeds’ story. The museum is just 10 years old, housed in the original Leeds Mechanics Institute—a Victorian institution over four floors originally dedicated to “educating the working man.” 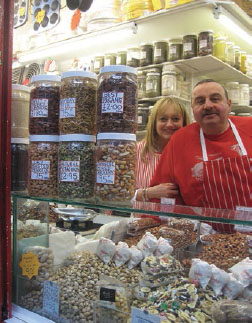 Owners Joanna and Nigel Johnson have been fixtures at The Nut Stall for years—in the very center of the largest indoor market in Europe. The ornate Victorian Quarter Arcade nearby was designed for more upscale shoppers. Rebecca Gardner

Many of the cultural venues in the city center originate from Victorian planners and builders. Leeds Town Hall was built in 1858 as an iconic symbol of the city’s wealth. Today it hosts orchestras from around the world. Across the street is Leeds Art Gallery, Leeds Central Library, The Tiled Hall Café, and the Visitor Information Center; all just a block from the museum.

Theatrical entertainment was also important. Leeds City of Varieties was built more than 150 years ago and now is fully restored as a rare example of a traditional music hall originally for the working man. Still used today, the stage has seen acts such as Houdini and Charlie Chaplin. Later in 1878, the well-named Leeds Grand Theatre and Opera House was built for more refined Victorian tastes.

Amid all this frenzied Victorian building, evidence of the Georgian cloth trade has not completely disappeared. The original gates to the Coloured Cloth Hall along with its commemorative blue plaque can be discovered just a 10-minute walk from the Town Hall. It is also next door to the Corn Exchange—the iconic building that symbolized the success of the next wave of successful Yorkshire merchants.

In the early 19th century, large grain warehouses and flour mills were being built by the riverside. The corn merchants or factors demanded a place to trade—a corn exchange. Naturally, Leeds built the biggest and best. Cuthbert Broderick, the architect also responsible for the Town Hall and Mechanics Institute, was inspired by the Halle au Blé in Paris. He designed a large elliptical domed roof with partially glazed paneling to let in natural daylight, but, importantly, no direct sunlight. Generally, visitors to Yorkshire are rarely troubled by the excess sun. Delicate corn grains are damaged by direct sunlight, yet still needed to be inspected insufficient natural light. The building accommodated 200 traders at small black desks, all throwing handfuls of grain into the air for such inspection. Yet more busy Tuesdays saw Leeds handling massive quantities of grain, wheat, and flour, including imports from America, Canada, and Europe. 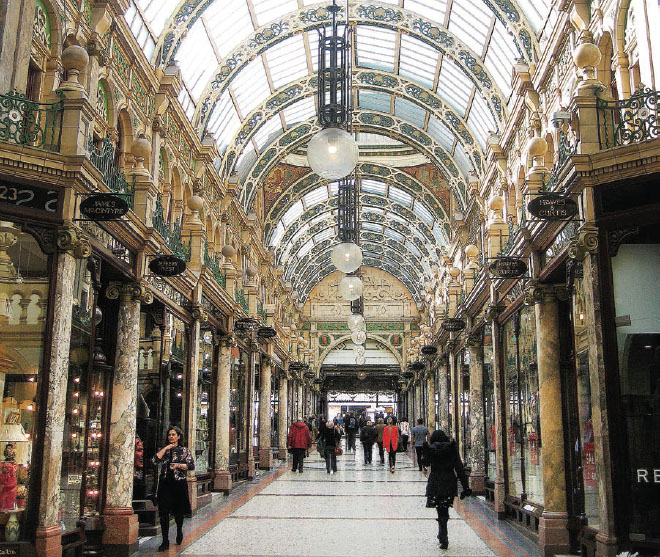 
Today the Corn Exchange is home to many independent stores and events. The building’s exterior, although substantial, simply does not prepare visitors for the lavish interior. Elaborate cast-iron staircases link all three stories, with galleried arches leading to the stores that were once corn factors’ offices. Chandeliers light up the entrance lobby before you benefit from the natural light coming through those glazed panels and that magnificent domed roof.

Leeds was now becoming a great Victorian city. It built to display its wealth, but also to support the needs of a growing population. Leeds Kirkgate Market opened in 1857, designed by Joseph Paxton, the architect of London’s Crystal Palace. It was then, as it is now, one of Europe’s largest indoor markets. A large glass-domed roof is supported by two floors of ornately painted ironwork. More than 500 stalls, inside and out, sell everything from flowers and fish to French crepes and giant filled Yorkshire puddings.

Joanna Johnson has worked at The Nut Stall for 34 years, right in the center of the market. She started as a “Saturday girl” when she was 14. With husband Nigel, she sells nuts, dried fruits and baking supplies including “the best Californian walnuts—one of our bestsellers.”

Johnson says: “It’s a beautiful building. We see people taking photos every day. They love the banter with the traders.” One of the reasons for the photography is their famous neighbor.Marks and Spencer, the iconic British brand, started from a single market stall in 1884. Malcolm Marks, a Polish refugee, used the line, “No need to ask the price—everything’s a penny.” The original stall has now been re-created telling the M&S story.

With such a huge area filled with the buzz of market life, including Fish Row, the outdoor market and food choices from tea to Thai, the market is often used for filming. The Victorian tiled walls have even stood in as a London Underground platform.

For a touch of retail and architectural luxury, head back to Briggate, where five covered arcades were built for the Victorian middle classes to promenade in comfort. The County and Cross arcades, known as the Victoria Quarter, have carved walls and galleries in pink terracotta, mahogany storefronts and marble floors. The arcades’ theatrical extravagances such as the mosaic and gold friezes in the central dome, with their art deco maidens, are due to architect Frank Matcham, better known for his theater designs. The largest stained-glass window in Europe acts as a stunning roof across both arcades making the most of that Northern sunshine.

Leeds is busy every day now, not just on Tuesdays, but take a rest by stepping through a crack in time. A handful of small medieval alleyways lead off Briggate revealing a hidden world of tiny traditional pubs and converted workers’ cottages. Whitelocks is Leeds’ oldest pub, dating from 1715, and has served cloth traders, grain merchants, Victorian bricklayers and 20th-century shoppers. Ask a local to help find the gap between the modern stores to discover this hidden gem.

“They were going to knock this down, but I saved it,” says Kevin Grady, standing outside another one of these hidden pubs, The Angel. In the 1970s and 1980s, Georgian and Victorian architecture was not valued as it is today. Almost exactly a century after Leeds proudly became a city in 1893, Leeds Civic Trust in the 1990s started to flex its muscles under Grady’s direction. Thirty years of campaigns to save the city’s heritage and regenerate its surroundings have seen the city grow and flourish along with the group. As well as advising the city council, they guide locals and visitors on a popular city walking tours.

So if you do find the gap back in time to Whitelocks, raise a glass of real ale to the Georgian traders who grew the city’s wealth, the Victorian builders who created the architecture and the modern campaigners who saved it for locals and visitors today.

A touch of Northern hospitality 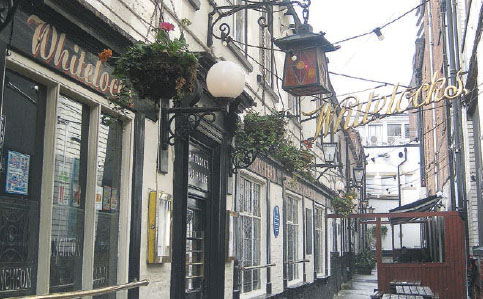 Restored 10 years ago, The Tiled Hall Café, originally the Library Reading Room, spent 50 years behind false paneling. Now the grand mosaic tiled ceiling and walls, as well as parquet floors, have been revealed. An elegant spot for afternoon tea.

One of the most complete Cistercian monasteries in Britain. Enjoy walks in the Abbey Park along the River Aire.

A popular museum looking at many Leeds industries including a working waterwheel, factory, and mill machinery and restored Victorian workers’ cottages.

One of the last remaining water-powered mills in Britain set on an island in the River Aire, just two miles from Leeds city center. Visit the mill owner’s house, engineering workshop, and waterside picnic areas.

Details of all attractions can be found at leeds.gov.uk/museumsandgalleries.