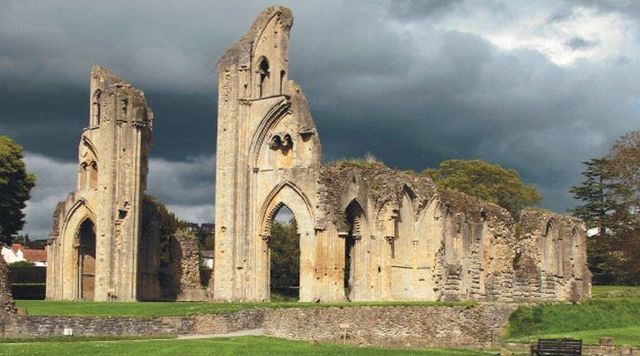 Have more spiritual claims and legends attached to Glastonbury than any other place in England?

A breeze, welcome after the stomp, sprang up, or maybe it was the vortex of energy created by the crossing of two ley lines—St. Michael and St. Mary—right where I stood. A gentle singing wafted in the air, not, as I first imagined, the distant voice of the wizard Merlin, said to live deep within the hill, but a solitary pilgrim, sitting cross-legged where earth met sky. A couple of dog-walkers (seen it all before) passed by without a second glance.

Do more spiritual claims and legends attach to Glastonbury than any other place in England? The conical tor, a landmark for miles around, literally throbs with them, and Glastonbury Abbey, Chalice Well and the small market town beneath have drawn pilgrims for centuries.
Just 30 miles from Bath yet a mystical lifetime away, the low-lying Somerset Levels south of the Mendip Hills can be an eerie place. Here, long before drainage ditches quilted the peaty moors, Iron Age man lived on island villages amid inlets of marshy sea—last winter’s images of flooding stirred the folk memory. Saxon settlers grazed their herds on the region’s pastures in summer: hence Sumersaeta, “Land of the Summer People.” Man and landscape wove their intimate connections into stories, handed down over generations. 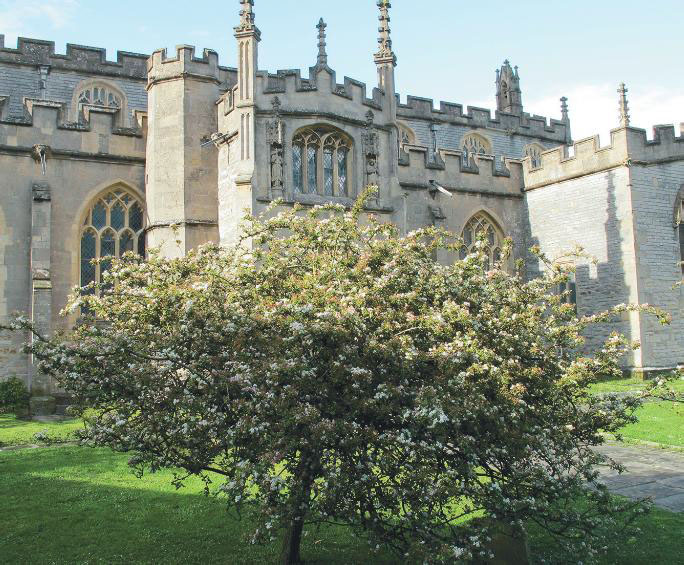 The tor’s tangle of tales includes its claim to be a site of pre-Christian worship and center for fertility rites based on legends of the Mother Earth goddess. Summer Solstice, a Goddess Festival and Beltane are still celebrated on the pregnant tump, while striking terracing around the hill is allegedly a labyrinth that will take you on a journey of re-birth. Alternatively, it could just be the result of differential erosion of bands of clay, limestone and sandstone.

It’s asserted that Joseph of Arimathea visited Glastonbury with his great-nephew Jesus, and that Joseph returned with the chalice from the Last Supper into which he had received drops of the Saviour’s blood at the crucifixion. The vessel was hidden at the foot of the tor, where a spring flows at the Chalice Well.

Monks who lived on the tor as far back as the 9th century came from the abbey for solitary refection. St. Michael’s Tower, all that survives of a medieval church, is today’s iconic crown on the summit. Maybe the panoramic view over lush fields to distant hills is indeed the Jerusalem of William Blake’s poem and Hubert Parry’s rousing anthem; maybe those feet did walk “upon England’s mountains green. And was the holy Lamb of God, On England’s pleasant pastures seen?”

For good measure, legend says King Arthur came here, too, in search of the Holy Grail, and the strange hill, rising from the erstwhile marsh, made a plausible Isle of Avalon. Linger long enough and anything seems possible. Then head back into town to the abbey and firmer details. If you’re walk-averse— it’s a mile each way between abbey and tor—there’s a Tor Bus service (April–September), though it’s still a puff up the path (with a bench halfway) to St. Michael’s Tower. 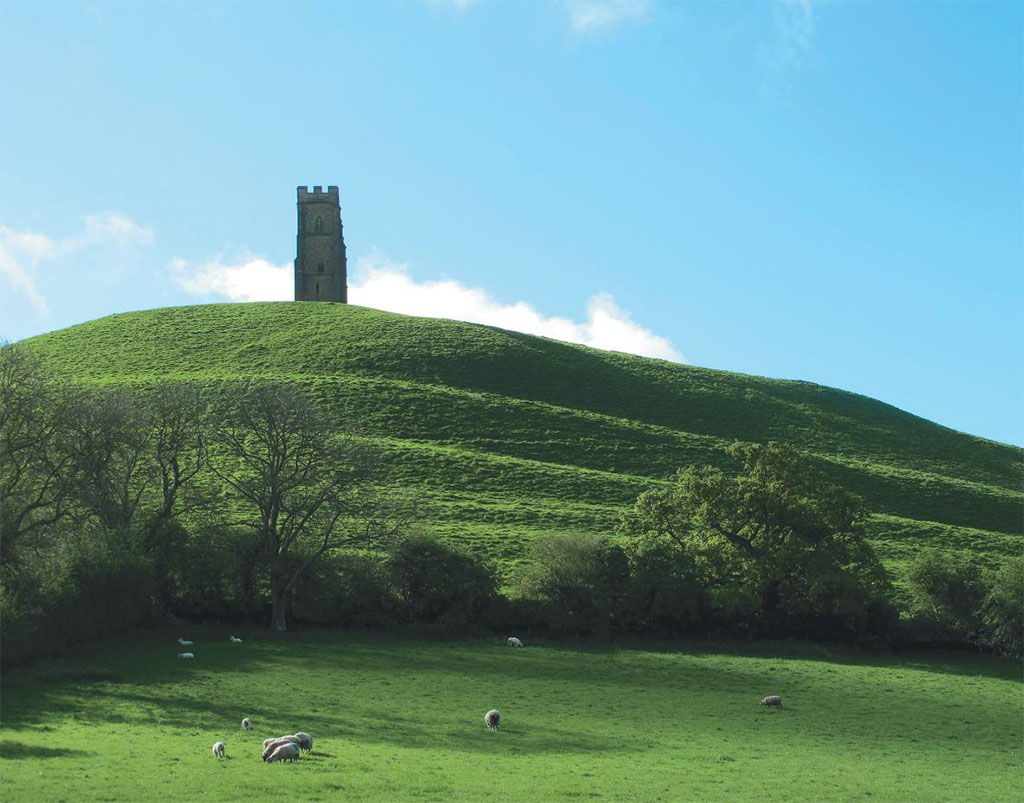 St. Michael’s Tower is all that remains of the medieval church atop Glastonburg Tor. SIÂN ELLIS

The extensive ruins of Glastonbury Abbey, survivors of ransacking at the Dissolution in 1539, sit in 36 acres of parkland. Costumed guides tell lively stories of when the magnificent foundation was second wealthiest in the land, and the rare 14th-century Abbot’s Kitchen stands testament to hearty living for the abbot, if not the humble Benedictine monks. A fine museum reveals the back-story of “England’s cradle of Christianity.”

No one is sure exactly when the first Christian community came to Glastonbury. Archaeology takes us to circa 600 on the abbey site and 540 on the tor (non-Christian finds reach into prehistory’s mists).

Oral, and later written, traditions tell that Joseph of Arimathea came to Cornwall to trade with tin miners and to the Mendips for lead, some versions asserting that Jesus visited with his great-uncle. Then in ad 63 Joseph returned with 11 followers and, granted 12 hides of land by King Arviragus, built a wattle and daub church in Glastonbury—the first Christian church in Britain. The site of the Vetusta Ecclesia, or Old Church, is now occupied by remains of the Lady Chapel that was built following a well-documented fire in 1184.

Bringing the Holy Grail with him, Joseph had arrived at Wearyall Hill and, exhausted, he struck his staff in the ground to rest. The staff took root and grew into the sacred Glastonbury Thorn. One of many alleged descendants sits in the abbey grounds. The thorns flower twice a year, around Easter and Christmas, and a sprig from the tree in the churchyard of St. John’s on the town High Street is sent every year to decorate the Queen’s breakfast table at Sandringham on Christmas Day.

The abbey museum unfolds tales of visits by St. Patrick, who may have become abbot of a Celtic monastery here in AD 443, and of saints like David. Saxon King Ine constructed the first stone church in 712, the monastery flourished under St. Dunstan and the Normans added grandiose buildings. Thanks to such a rich storehouse of saints and heritage, the pilgrim industry, vital for income, grew apace—and when the 1184 fire destroyed much of the abbey, money was certainly required quickly.

By an amazing coincidence, the monks, directed by visions, searched for and found the inscribed tomb of King Arthur and Queen Guinevere in 1191—Avalon confirmed! Geoffrey of Monmouth’s 12th-century mythmaking had championed the West Country and Cornwall as a setting for Arthurian exploits and Cadbury Castle (Iron Age hill fort), mooted as Camelot, was just down the road. Pilgrims, including royalty, poured in and so did the cash.

Unfortunately, the (no doubt spurious) Arthurian bones, translated to a beautiful marble tomb before the high altar, were lost at the Dissolution, and today’s wooden marker and outline of the tomb site are something of an anti-climax.

The Chalice Well and Gardens, a 10-minute stroll away, are a charming oasis of winding paths, pools, secluded garden rooms, and, of course, a Holy Thorn. At their heart are the well and the Lion’s Head where the slightly metallic tasting spring waters may be imbibed (and welcome after my morning’s wanderings). The Red Spring, as it’s also called—the rich iron content colors the rocks—is said to represent the blood of Christ, miraculously springing forth where Joseph buried the chalice. 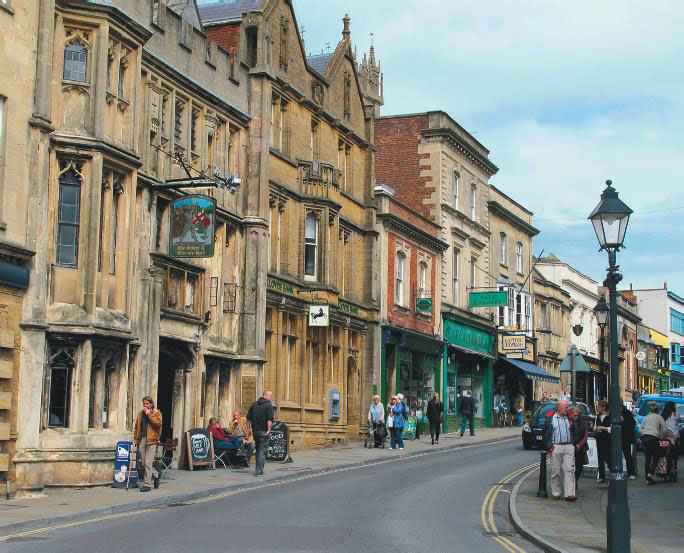 To this day, as a staff member told me, people report the waters’ healing effects. Indeed in the mid-18th century, Glastonbury enjoyed a brief moment as a spa, with attested cures for everything from asthma to deafness even threatening business at Bath. But the upstart country market town failed to wean high society of the city’s more sophisticated spa entertainments; Glastonbury’s pump rooms on Magdalene Street are now a private home.

There’s a relaxing vibe to the Chalice Well and great views to the tor above. Quite likely you’ll meet visitors in long flowing robes, meditating or talking of chakras. The thing about Glastonbury is, whatever its central truth, it attracts all sorts of colorful elaborations. “Many paths, one source,” as the Chalice Well proclaims. 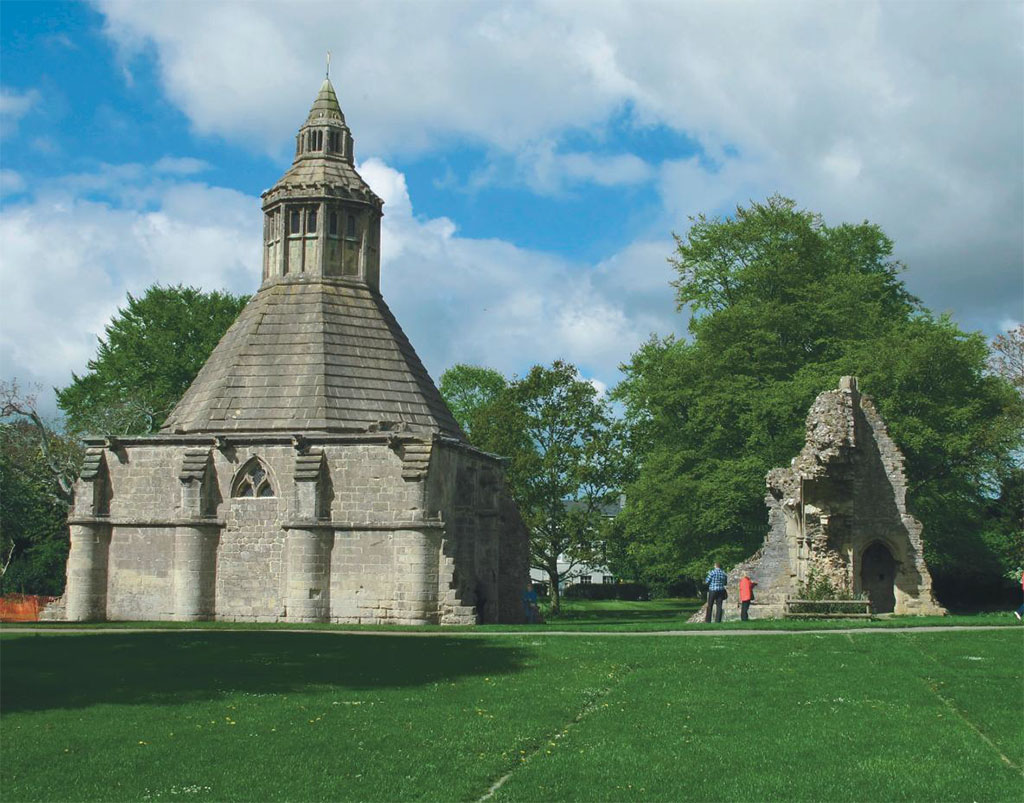 While Glastonbury’s Benedictine monks may have lived modestly, the powerful abbot and his guests were served from this remarkably preserved 14th-century kitchen. SIÂN ELLIS

Go with the flow through the town’s medieval streets and you’ll encounter a higher-than-average number of straggly gray beards and colorful floaty clothes. It’s as if the hippies who came in the 1960s forgot to leave and have been joined by fresh waves of new Age seekers. At the Tourist Information Centre, housed in the handsome 15th-century Glastonbury Tribunal building on the High Street, I was told many residents and most visitors take the town’s growth as a center for alternative beliefs very seriously.

Just across the road, Glastonbury Pilgrim Reception Centre (motto: Inspiring Unity through Diversity) was closed for refurbishment. No matter, the Glastonbury Experience Courtyard, Isle of Avalon Foundation (“Learn, Heal, Inspire”), shops and cafés around town amply showed what’s on offer to modern pilgrims. I could train to be a Priestess of Avalon or experience New Moon Healing in the Glastonbury Goddess Temple. I could buy crystals, candles, Shamanic cards, or Cosmic Wisdom Walking Shoes (eh, would they have helped climbing the tor?).

Without a doubt, Glastonbury is a highly enjoyable visit. Its pilgrim tourism is flourishing with a diversity that would dizzy medieval seekers even in their heyday. The abbey is informative; tor and Chalice Well, unmediated by museum and costumed guides, encourage imaginations to fly. Much is worth a chuckle. Some are stirringly thought-provoking. But then such a potpourri serves pilgrims of all persuasions; so do we leave the essential truth to the eye and soul of the beholder? Glastonbury seems happy to do so.

The ruins of the abbey church at the heart of Glastonbury Abbey stand sentinel over the site where legend claims that Joseph of Arimathea built the first church in Britain.